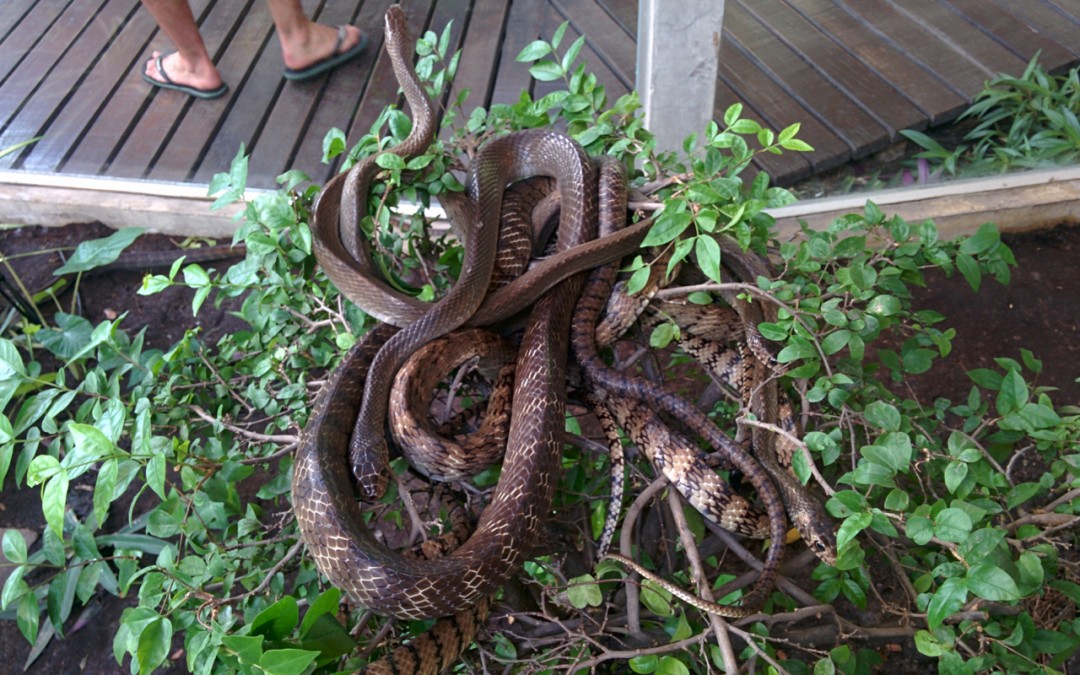 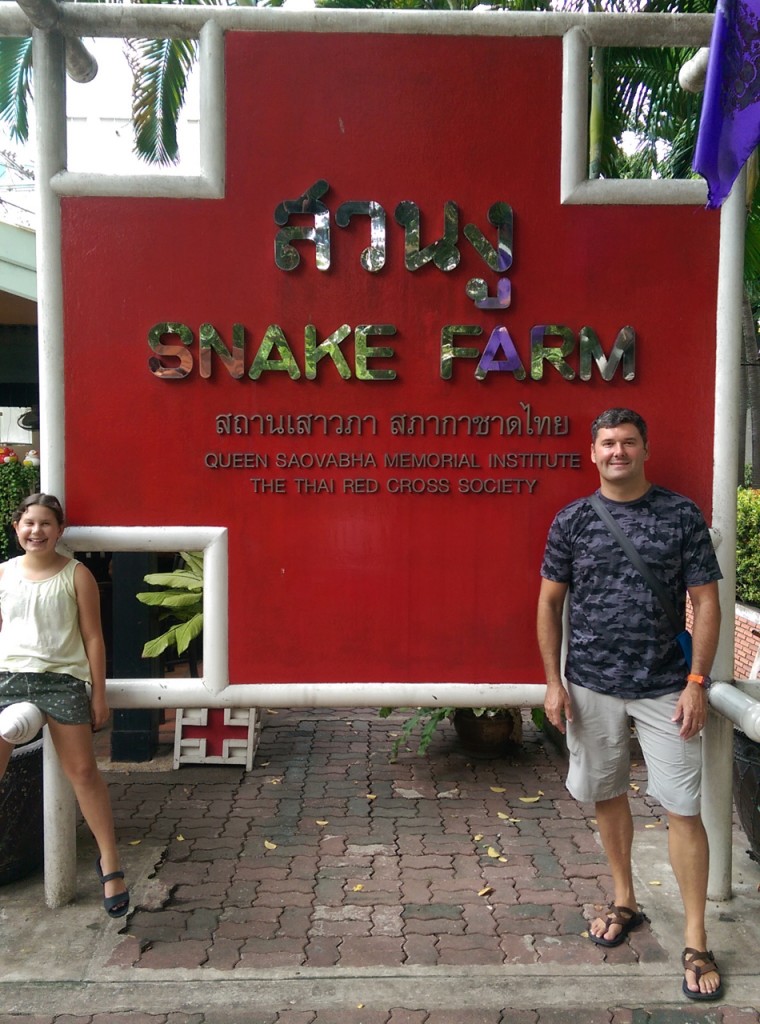 Yesterday we went to the Snake Farm at the Queen Saovabha Memorial Institute. It is a Red Cross facility that breeds and houses snakes – particularly venomous snakes – indigenous to Thailand. They extract venom, conduct research, and produce anti-venom.

There is also an educational “snake farm” open to the public, which is essentially a snake zoo and learning center. They had fantastic exhibits on the evolution and anatomy of snakes, reproduction, the role of snakes in the local ecosystem, different types of venom and their effects in humans and other animals, and more. There were live snakes, preserved specimens, example dissections, scale models of snake anatomy, and multimedia presentations. It was fantastic. 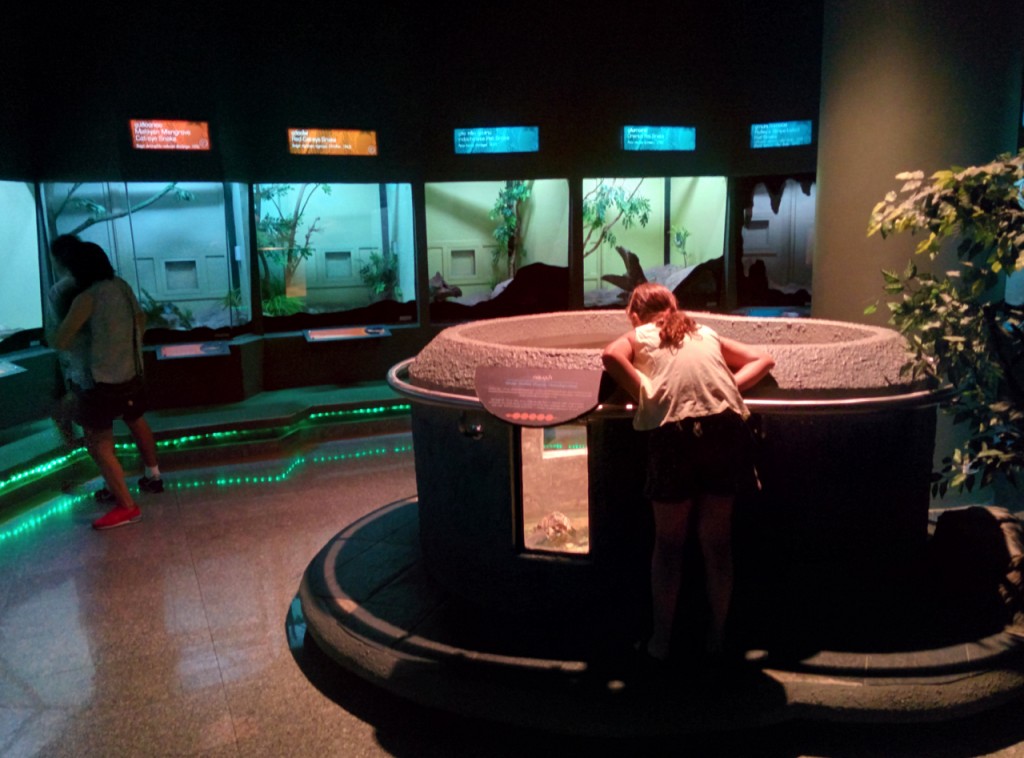 Great exhibits at the Snake Farm 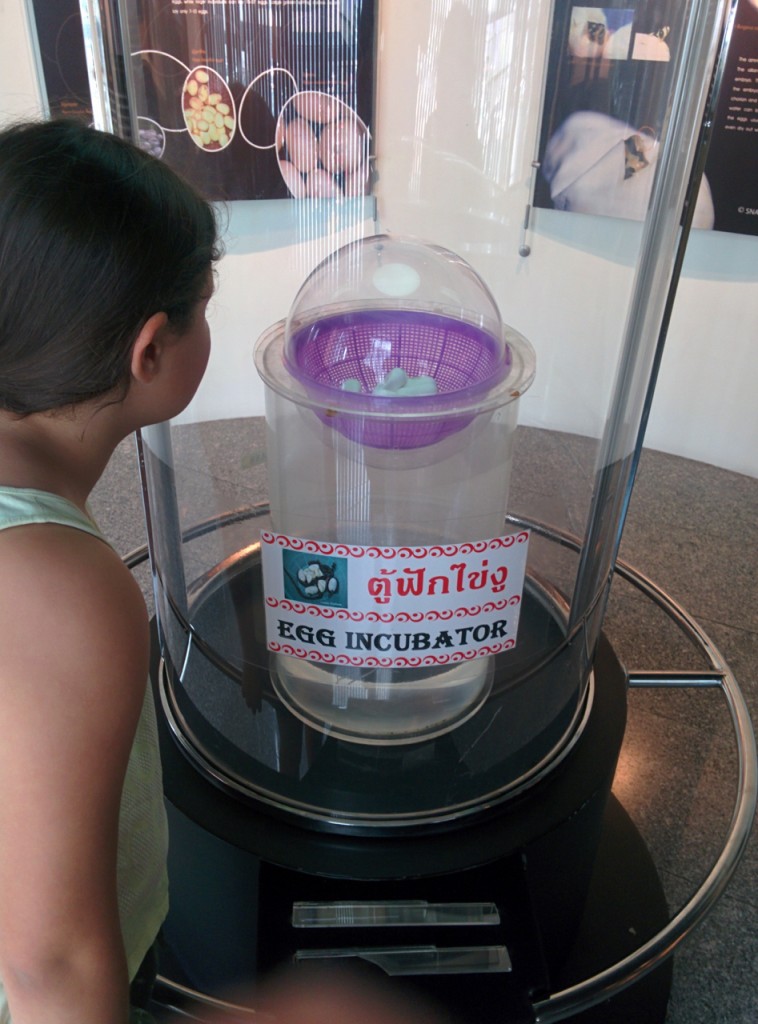 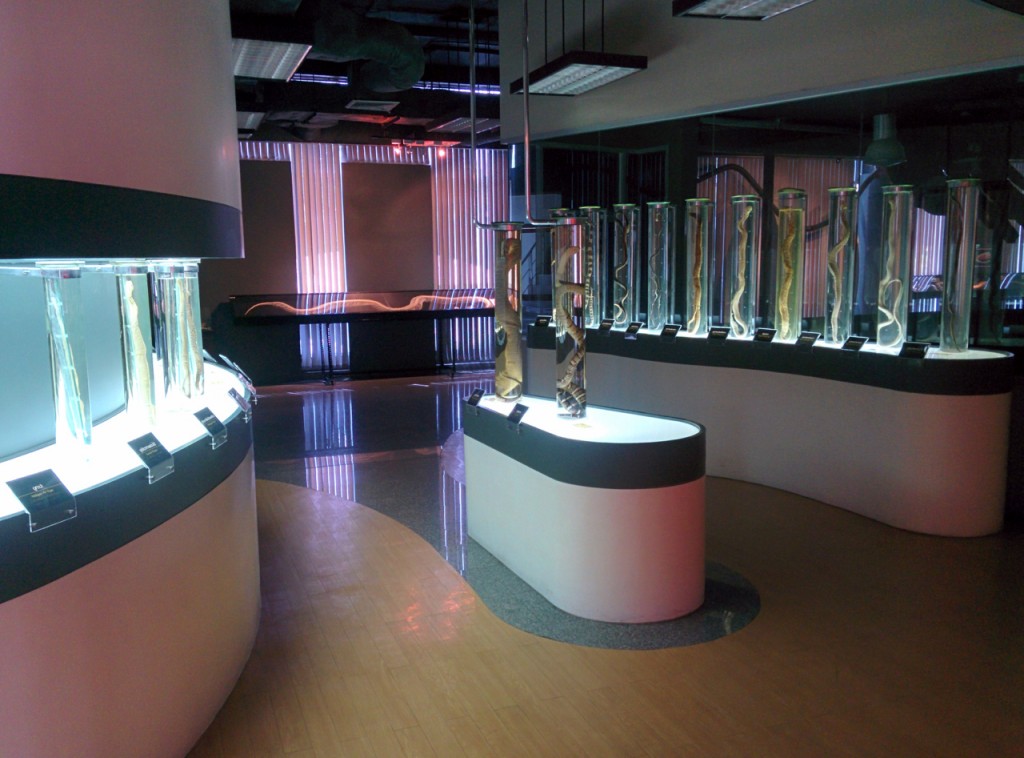 They also had a snake show where staff members brought out a variety of snakes – both venomous and non-venomous – for up close viewing. The snakes were neither defanged, nor recently milked of venom, so watching the handlers with them was a bit nerve-racking!

There was a set of bleachers and low wall separating the audience from a walkway. As you can see in the video below, the snakes were presented by the handlers in the walkway, sometimes held, sometimes placed on the floor. The only protective gear the handlers wore were simple rubber boots. Yikes!

The first snake they brought out was a large King Cobra. Well, since King Cobras can grow to more than 18 feet, I guess this one wasn’t too large, but it was certainly big enough! 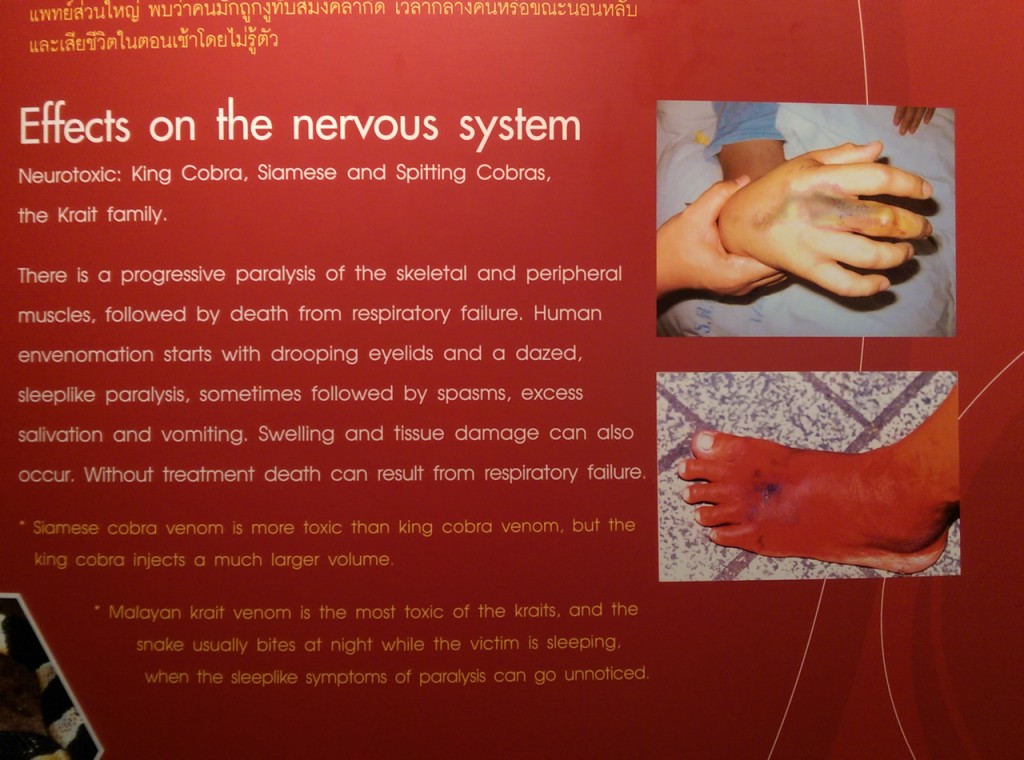 If you are wondering how you pick up a deadly king cobra when you are finished teasing it, it’s really easy. Here’s how:

After the cobra, they brought out about a dozen other snakes commonly found in Thailand. Most they held in their hands or set on the floor, but they brought out the pit vipers curled around branch-like sticks. 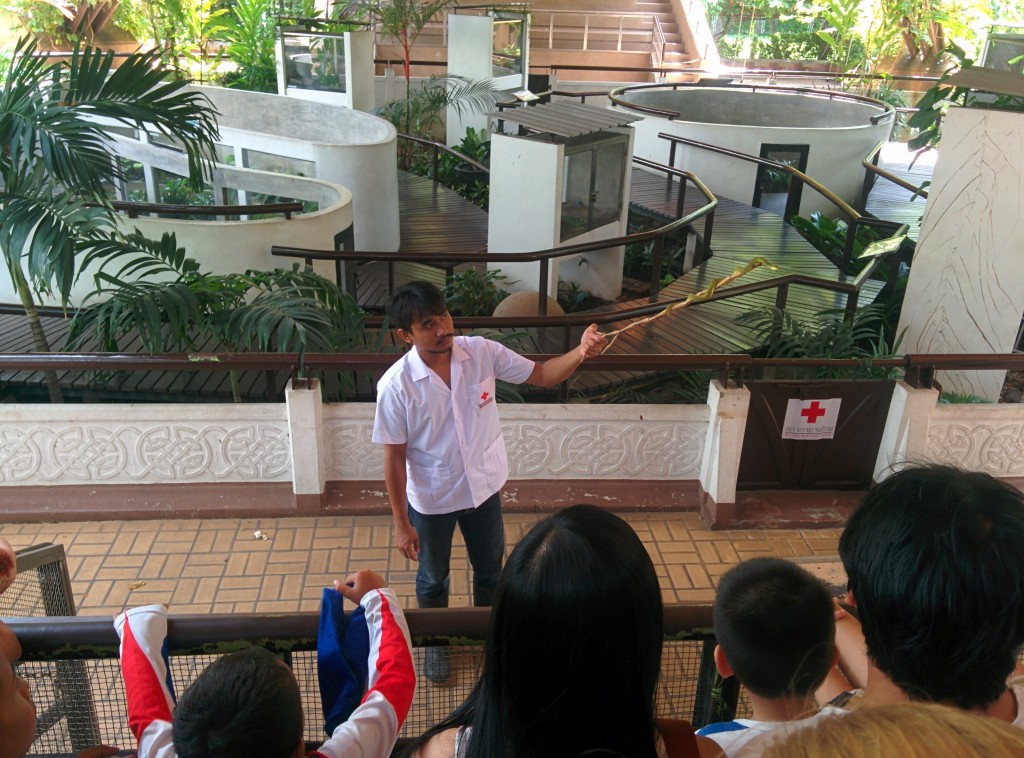 Pit viper on a stick

Because the pit vipers have heat receptors (their “pits”) they are much more likely to strike the warm flesh of the handlers if held by hand. Fun. The snake was not just sitting still on the stick, it was constantly moving. So the handler did a sort of slow-motion juggling routine shifting the stick from hand to hand and moving his grip on the stick to avoid provoking a strike.

Here is an interesting snake found in Thailand – the Copperhead Racer.

Aggressive little fella, huh? Thankfully he is non-venomous. Copperhead Racers typically eat small rodents and other small animals, so they are beneficial in controlling the populations of rats and mice. Cobras like to eat Copperhead Racers.

At one point the M.C. of the show asked the audience what snakes are doing when they stick out their tongues. Jette raised her hand and he called on her for the answer. She knew it. That was cool!

Even cooler, at the end of the show he asked for a volunteer from the audience. Once again, Jette was the one chosen.

When we walked through the exhibit later, a couple of Thai ladies smiled at Jette and said she was a “hero”! We crowned her the “Queen of Snakes.”

Needless to say we had a fun, educational experience at the snake farm. It was a good day.