We can cook Thai food!
I wish I could send it through the blog. It’s yummy! 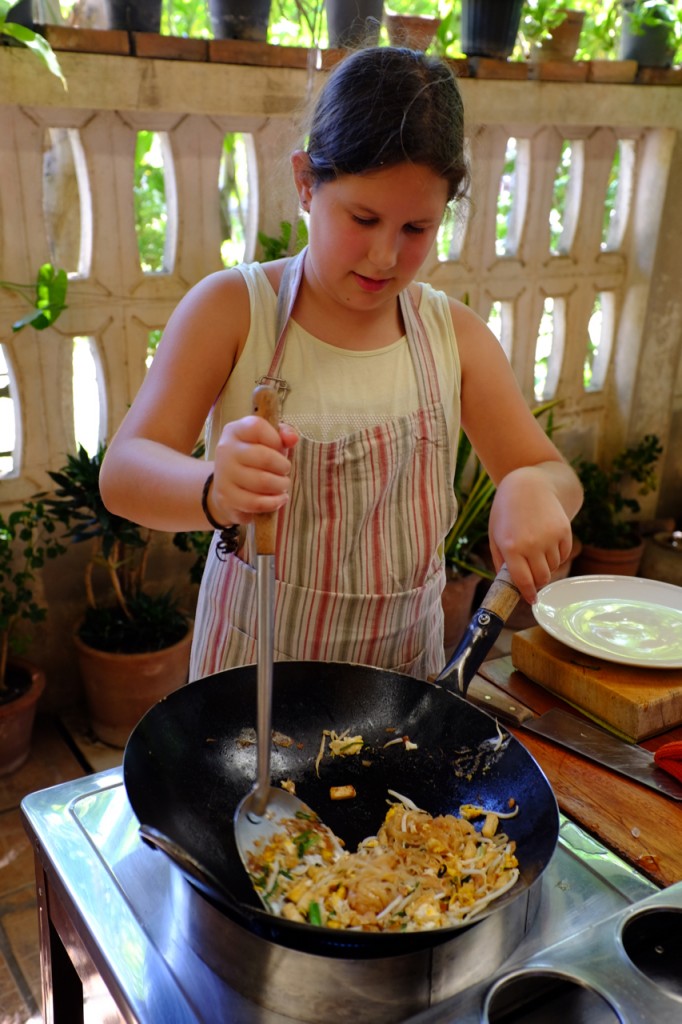 Last week we took a really great Thai cooking class  at A Lot of Thai here in Chiang Mai. Our instructor Yui was fantastic. She has a wealth of knowledge and experience and a real gift for sharing it. Her humble style is endearing and her smile and enthusiasm are infectious. Not only did we learn a lot, we had a lot of fun! 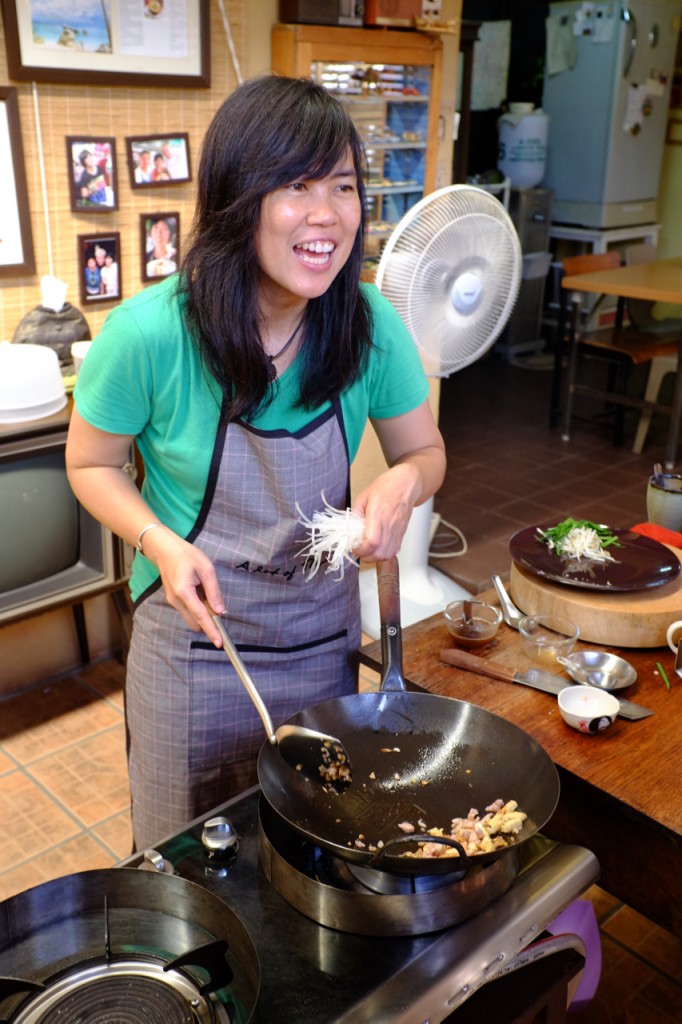 Yui clearly loves food, loves to cook and loves to share. She’s very knowledgable about both modern and traditional “grandma style” Thai cooking.There are lots of Thai cooking classes and cooking teachers in Chiang Mai but I doubt there are any better than Yui. When TV celebrity chef Gordon Ramsey came to Thailand, guess who taught him Thai cooking? I’l give you a hint: 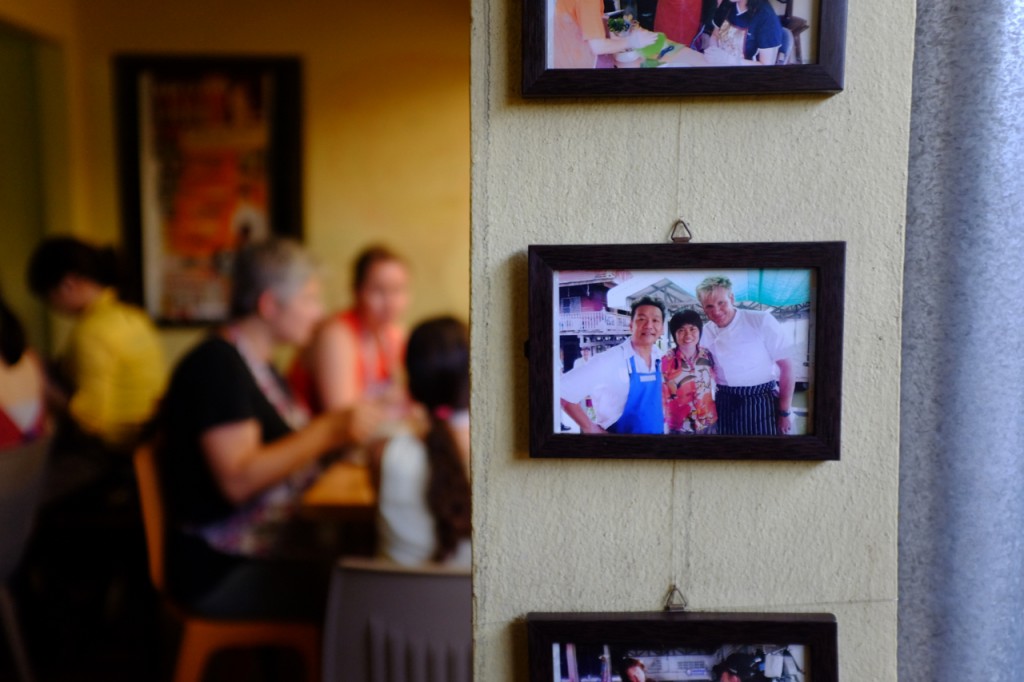 Photo of our teacher Yui with Gordon Ramsey 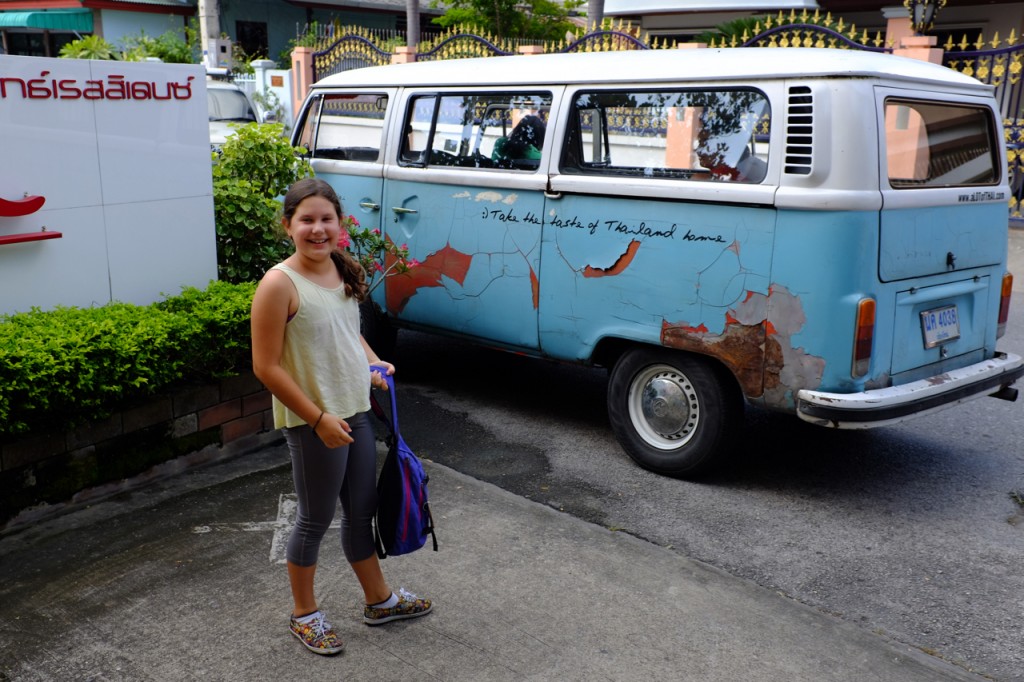 In the blink of an eye we were at Yui’s family home with our fellow students – a Dutch couple and four ladies from Taiwan. In Thailand it is very common for homes to have outdoor kitchens and a large covered patio at Yui’s house was exactly that. There was a cooking station set up for each student, a demo area for Yui, and a dining area where we could enjoy the fruits of our labors. 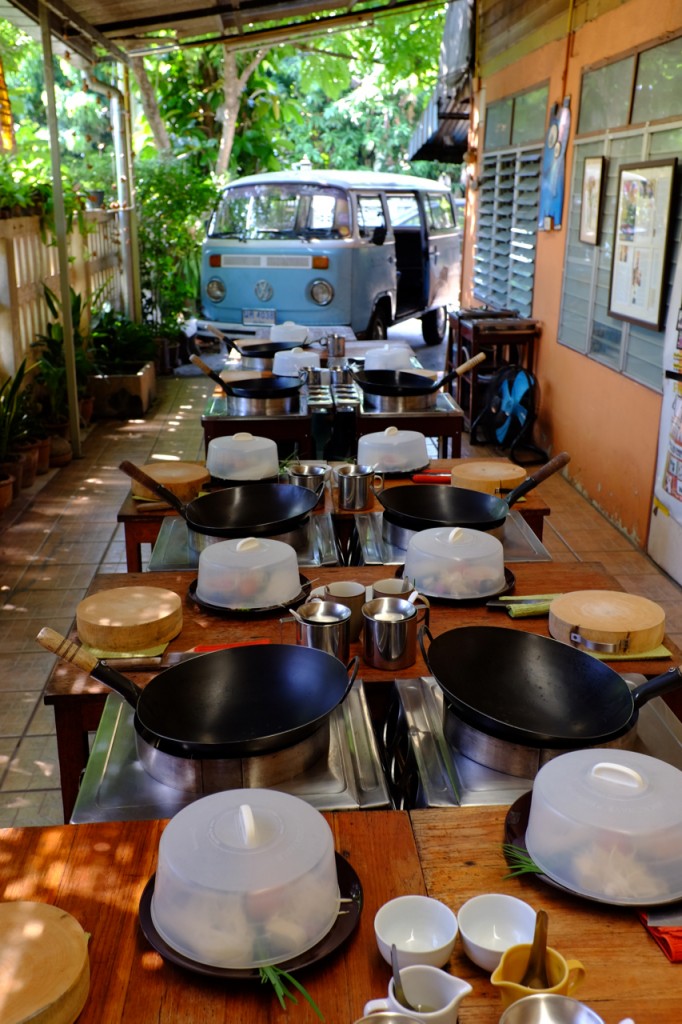 We donned our aprons and jumped right into learning how to cook Pad Thai. Yui talked about the dish, the underlying philosophy of flavors in it and in Thai cooking in general. Then she showed us how to make the sauce. More than just the measures of the ingredients, she taught us the reasoning behind the combinations of flavors, how to adjust the proportions for variations in component flavors and which components of the sauce to adjust based on the vegetables in the dish and which to adjust based off the meats. Before any cooking we were tasting her sauce and evaluating the flavor profile and identifying the components. By the end of her demo we had learned how to build a sauce based on taste, this philosophy of proportions, and understanding which ingredients countered others for balance.

This was a big “a-ha” for me. On the rare occasions that I’ve tried to cook Asian stir-fried dishes in the past I’ve never built the sauce first and never by taste. I’ve combined sauce components based on a recipe or a guess and then tried to adjust once the cooking starts – when it is already too late! 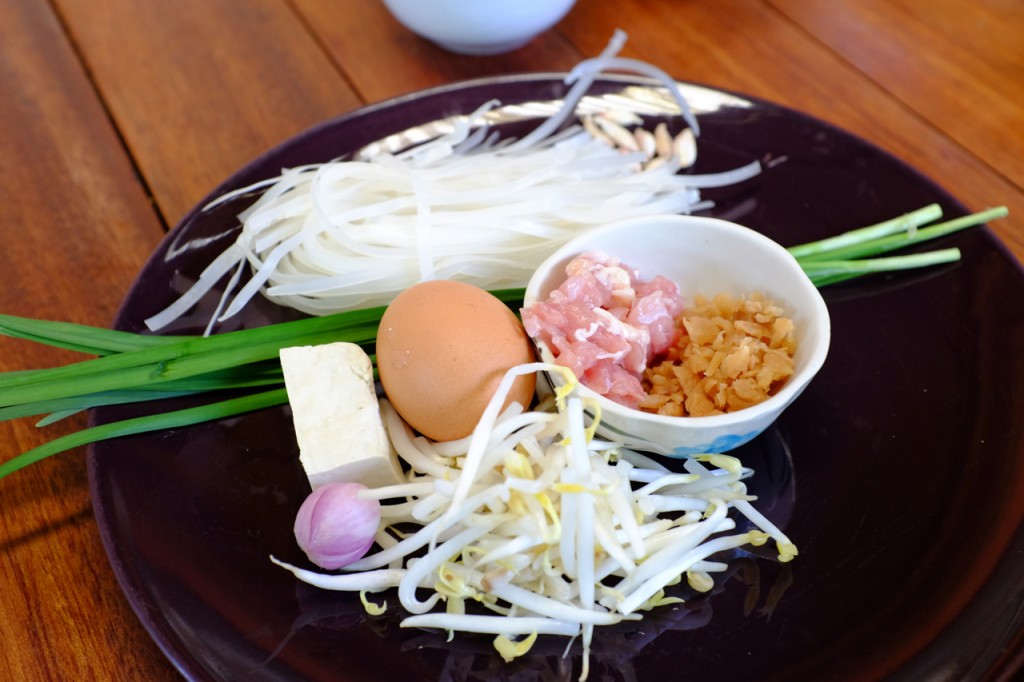 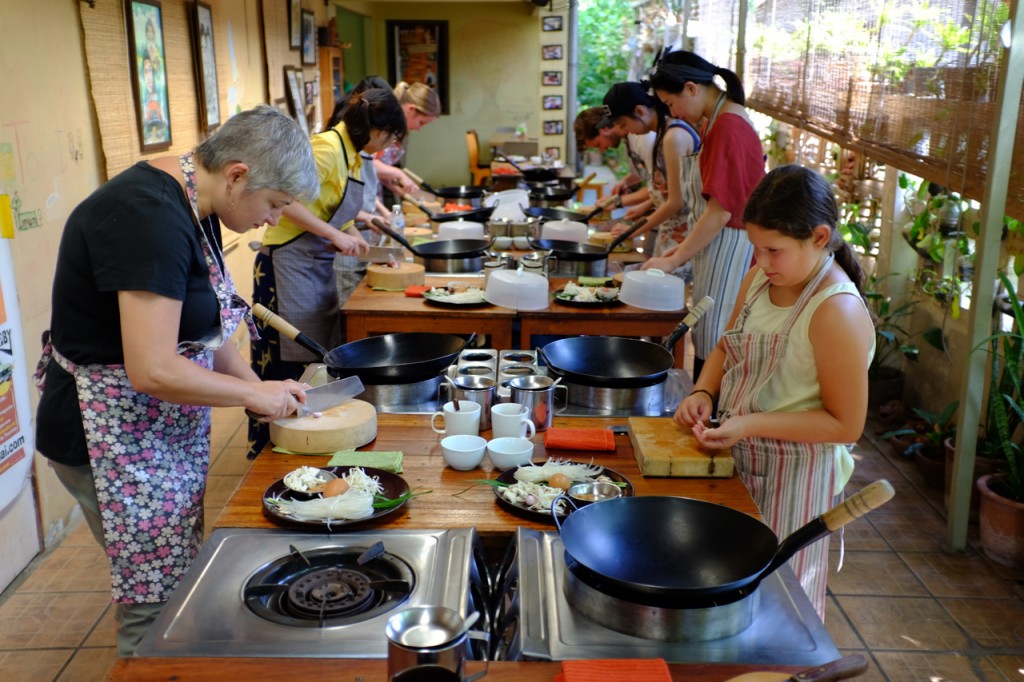 Getting to work on Pad Thai 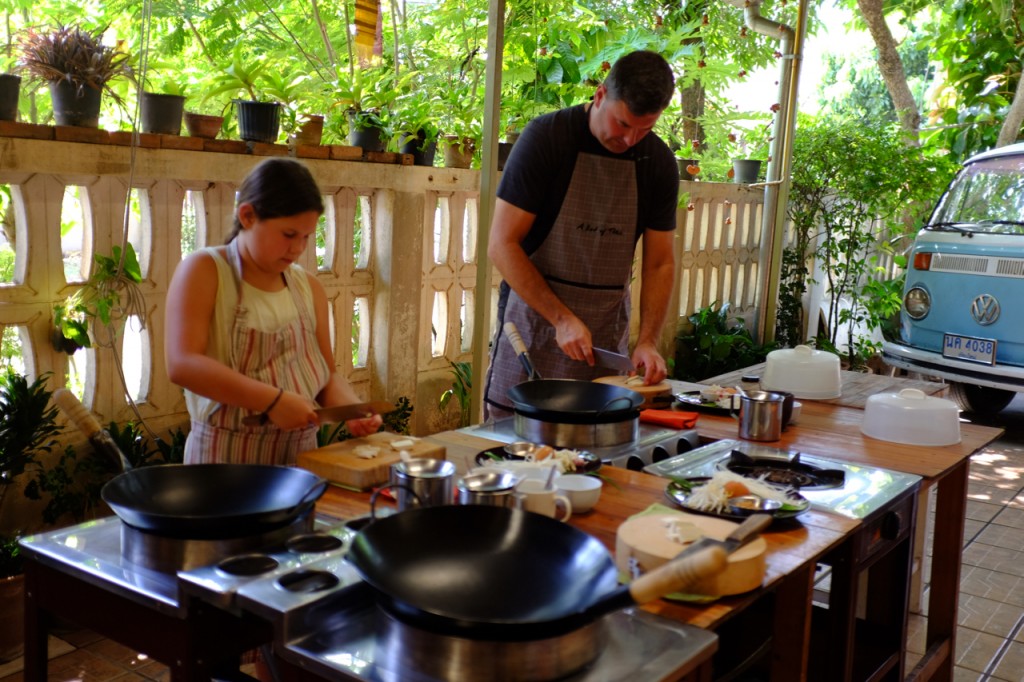 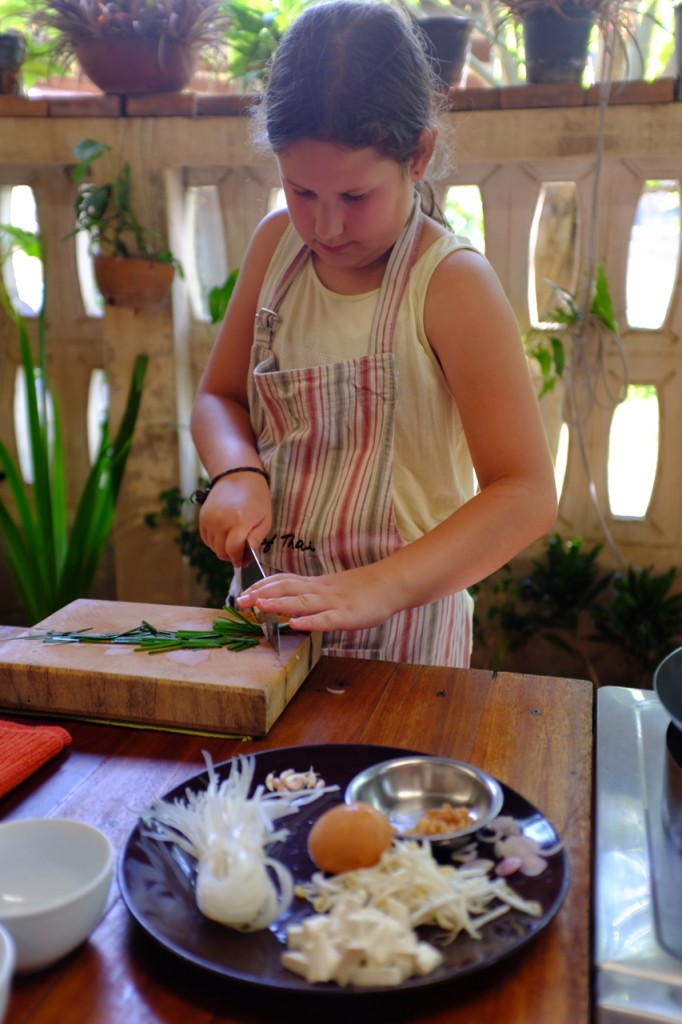 After our sauce and ingredients were prepped, Yui cooked her dish and we all had a chance to taste the finished product. This was key, as not only did it give us a point of comparison for our own dishes, it allowed us to train our palates to make the “taste translation” from the raw sauce to that of the finished dish. 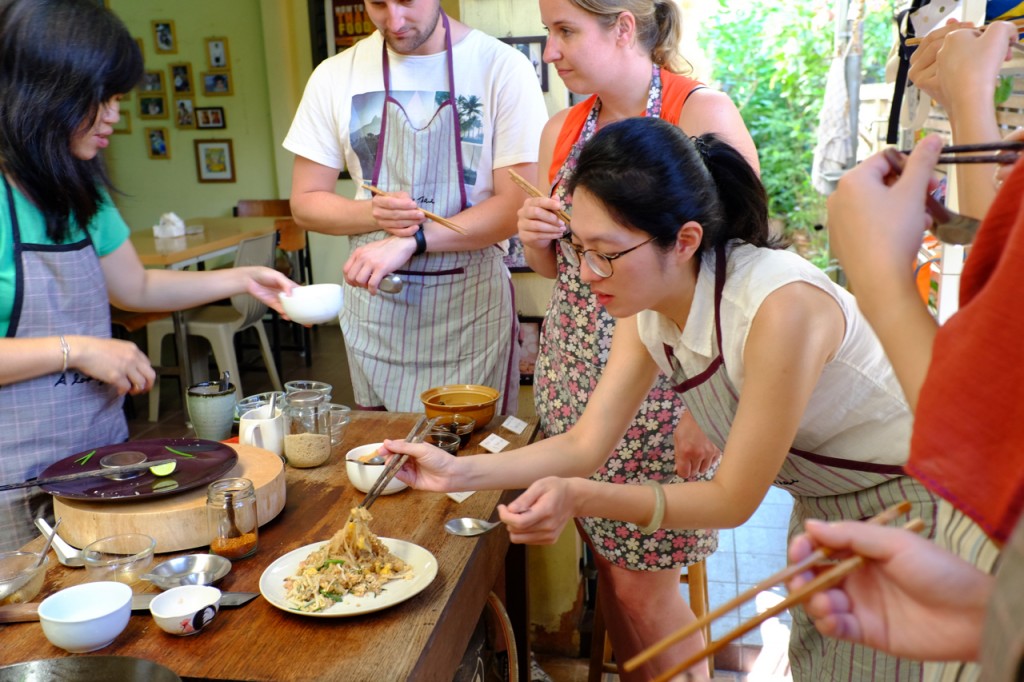 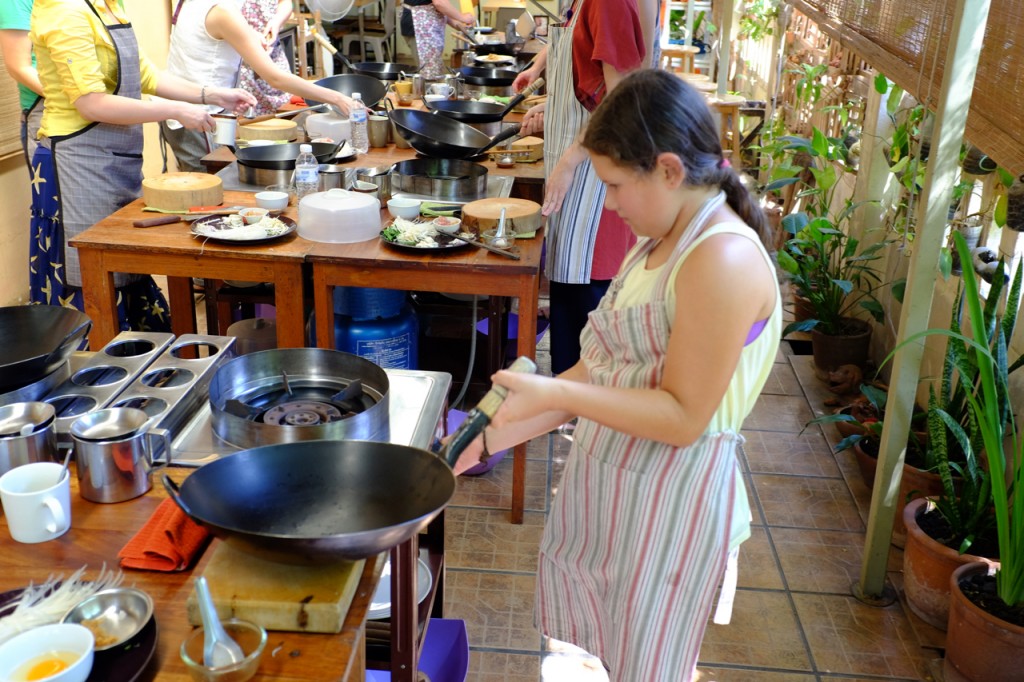 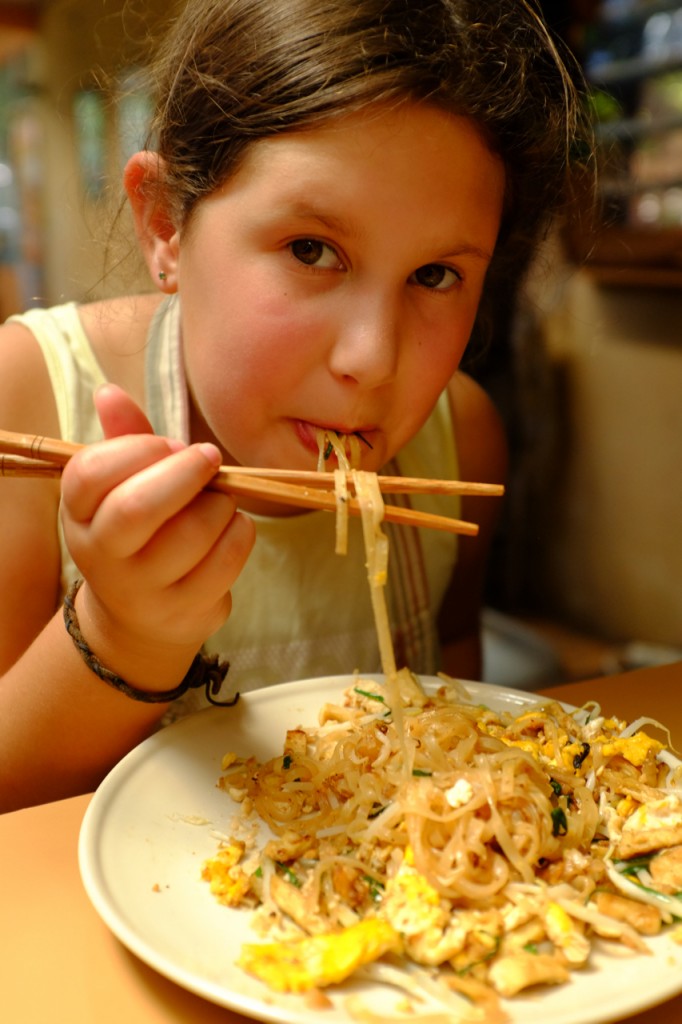 It tastes best when you cook it yourself! 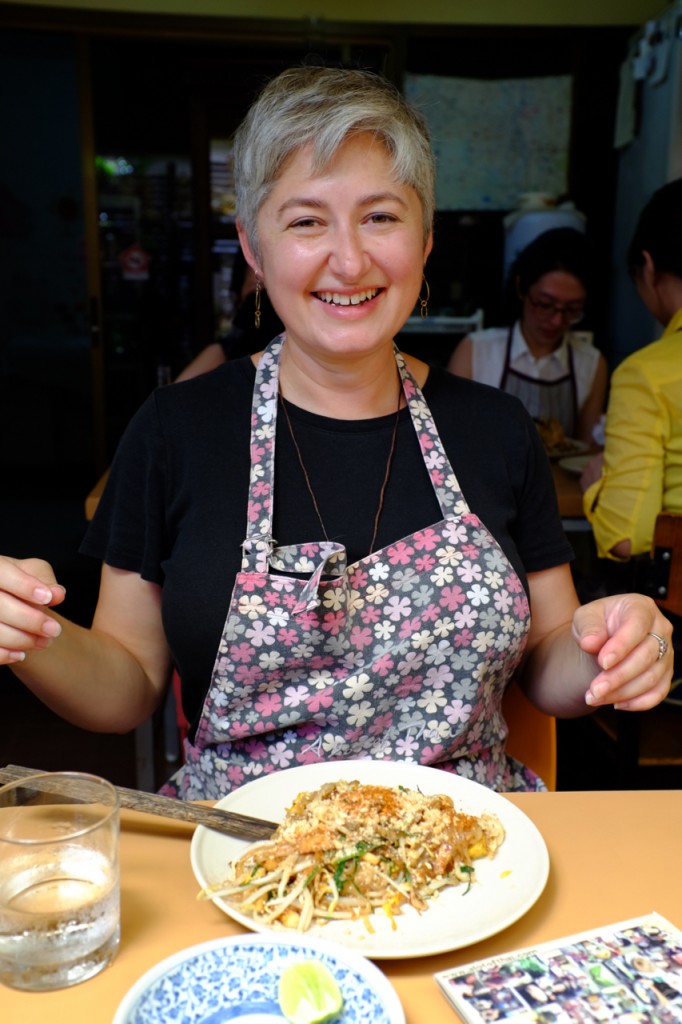 Mila and her Pad Thai

After Pad Thai, we learned red and green curry, hot and sour prawn soup, and stir-fried chicken with cashew nuts. Another “ah-ha” moment for me was how to get the correct cooking temperature, with the stir-fries in particular. 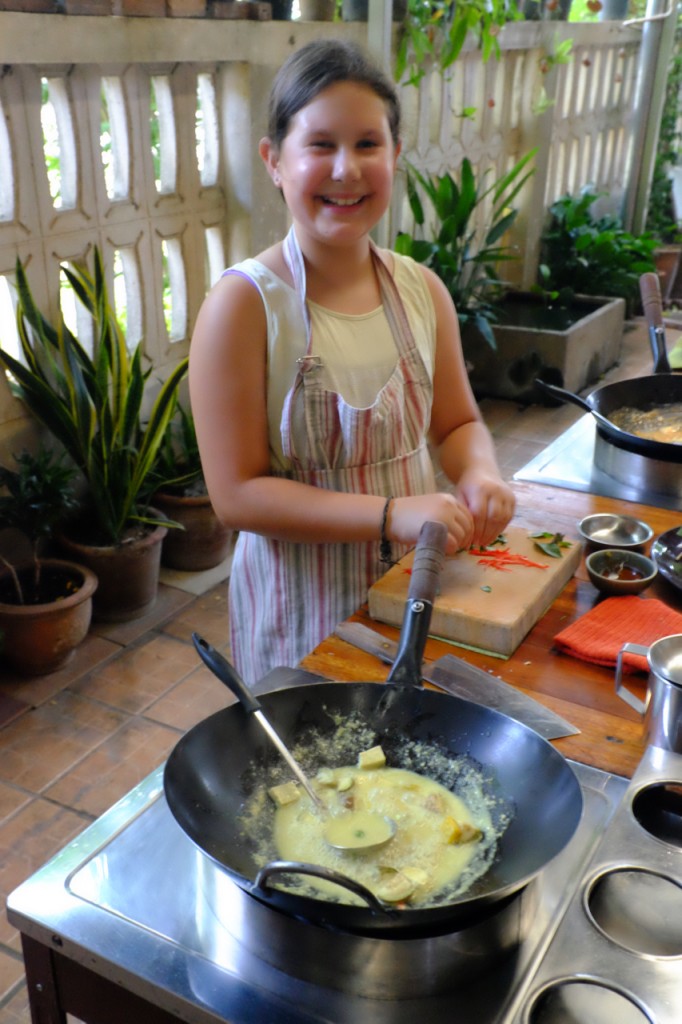 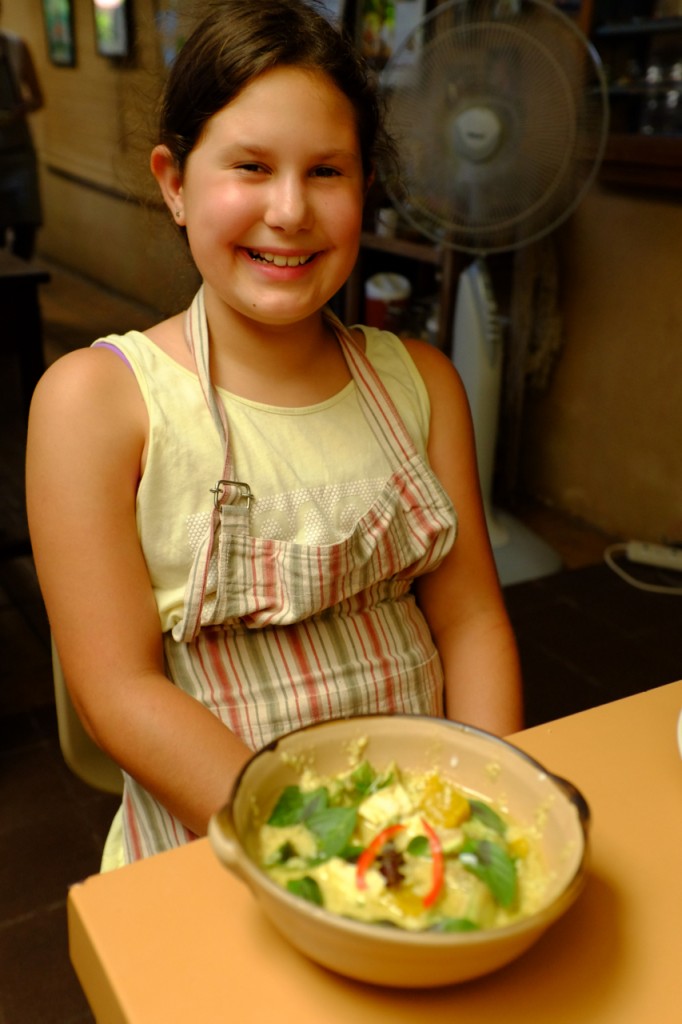 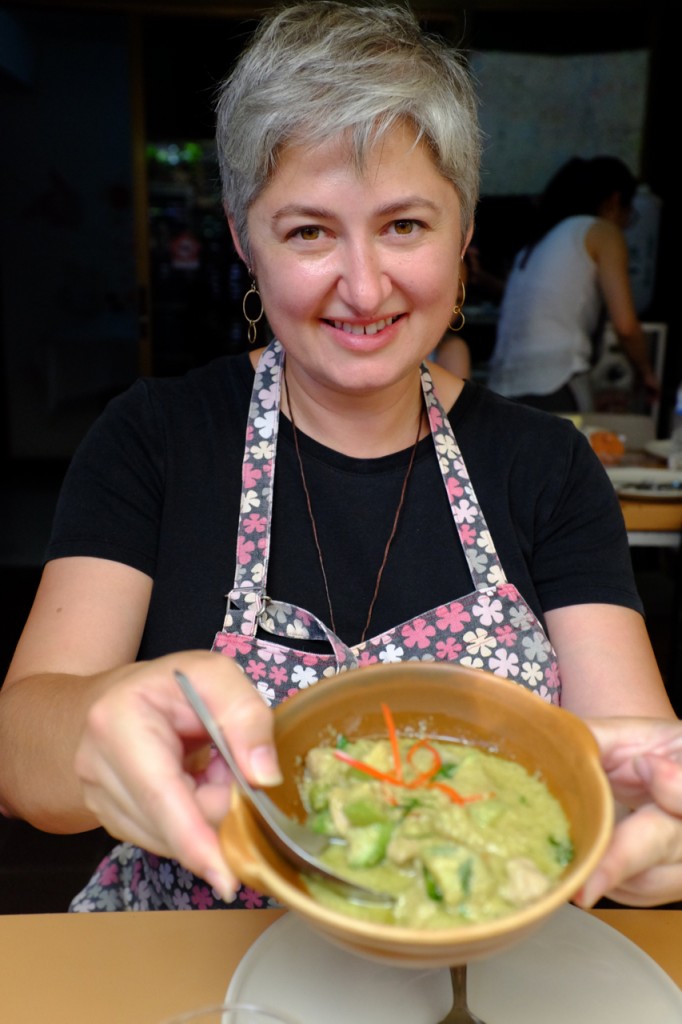 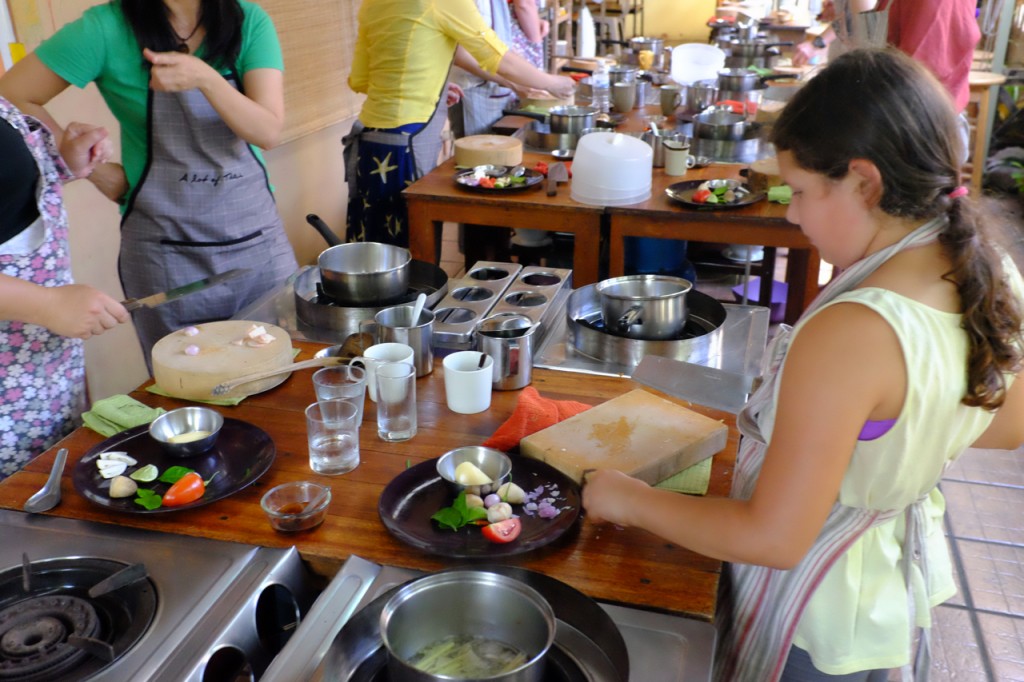 We took a break from cooking, piled into the VW bus and headed to the local farmer’s market to learn all about Thai produce and ingredients. This was a great experience as we were able to learn what to look for and how to select the best produce. For example, the Thai Eggplant I’ve bought at the Asian markets in Dallas has been much seedier than the Thai Eggplant we used in class. I asked Yui about this and she showed us what to look for when buying it at the market. Sorry, it’s a secret! To learn it, you’ll have to come to Chiang Mai and take her class. 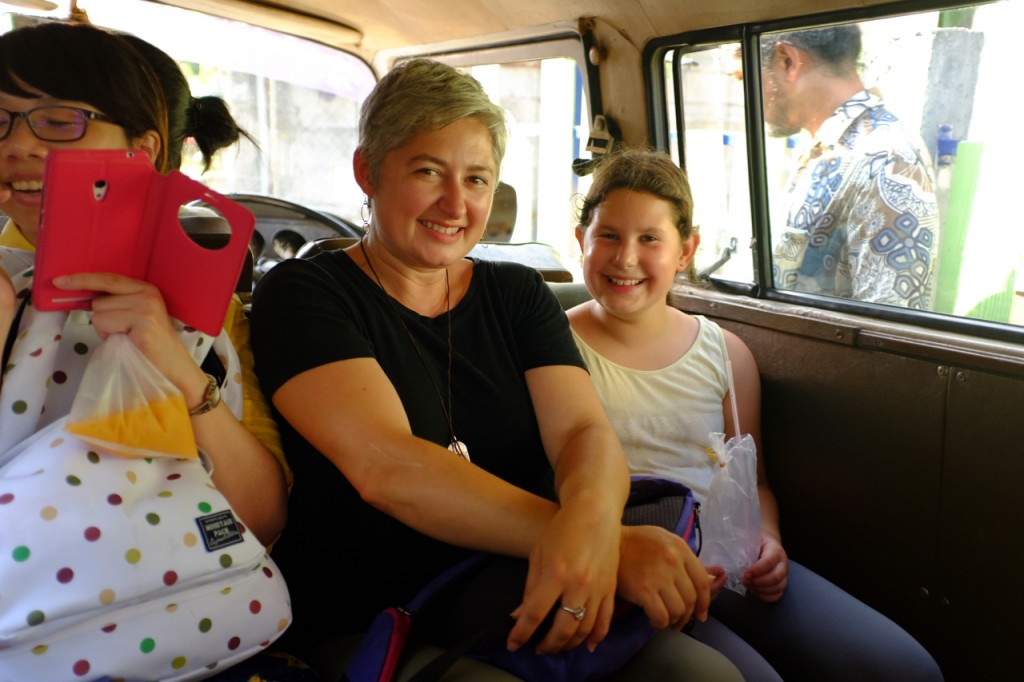 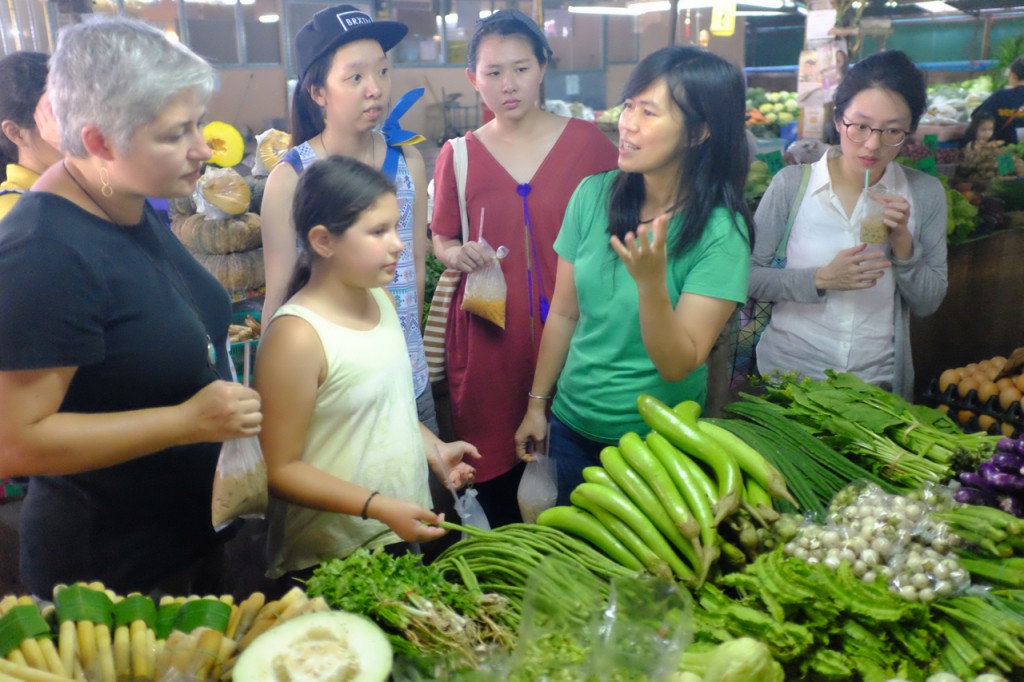 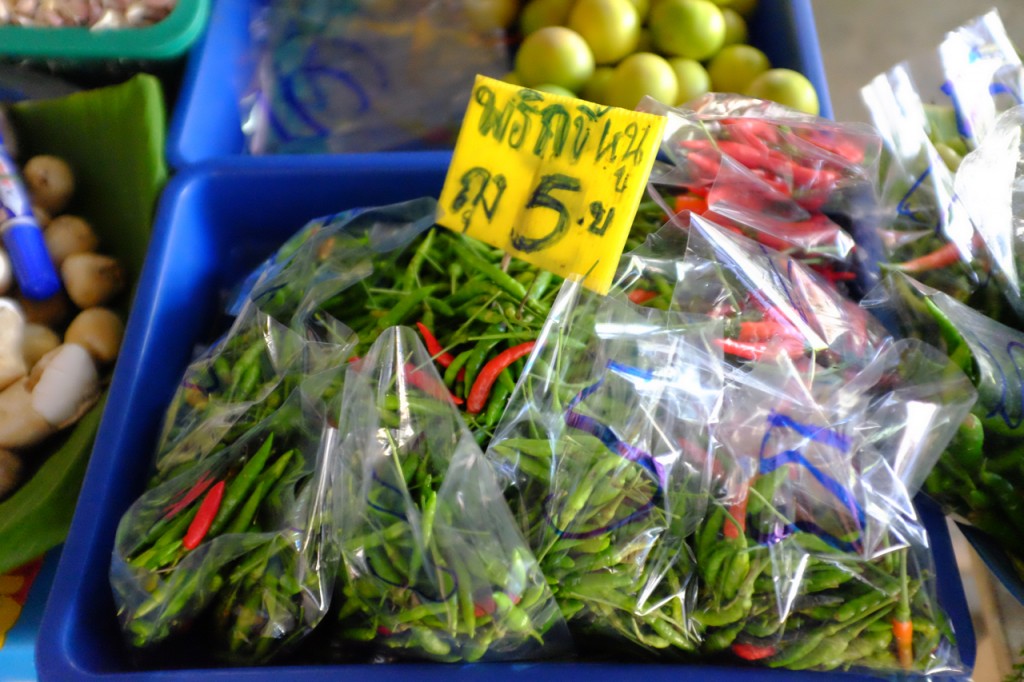 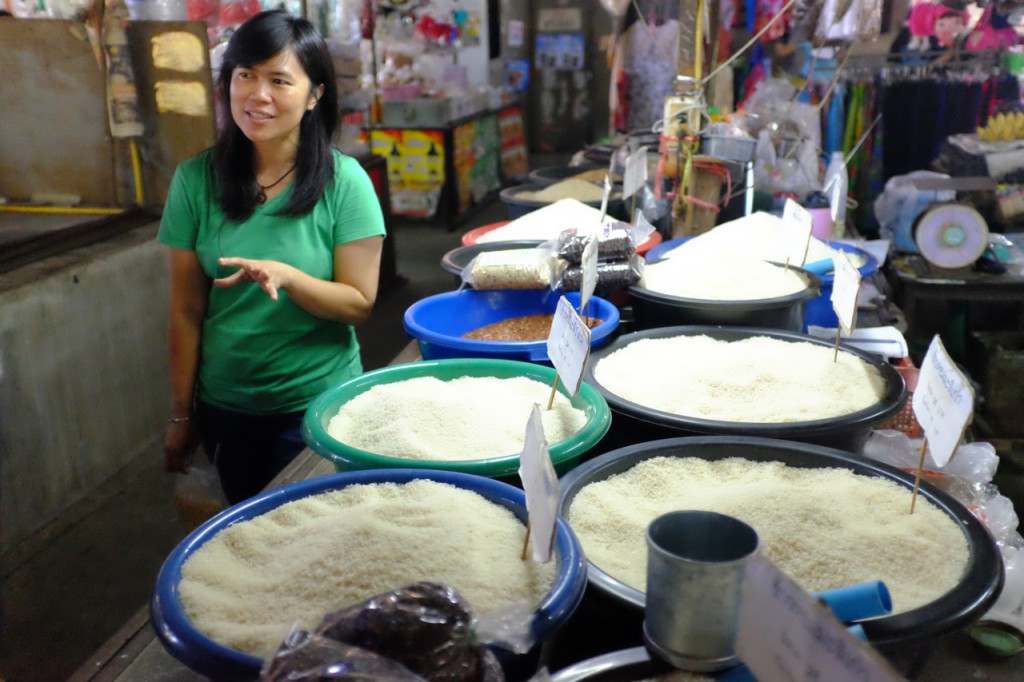 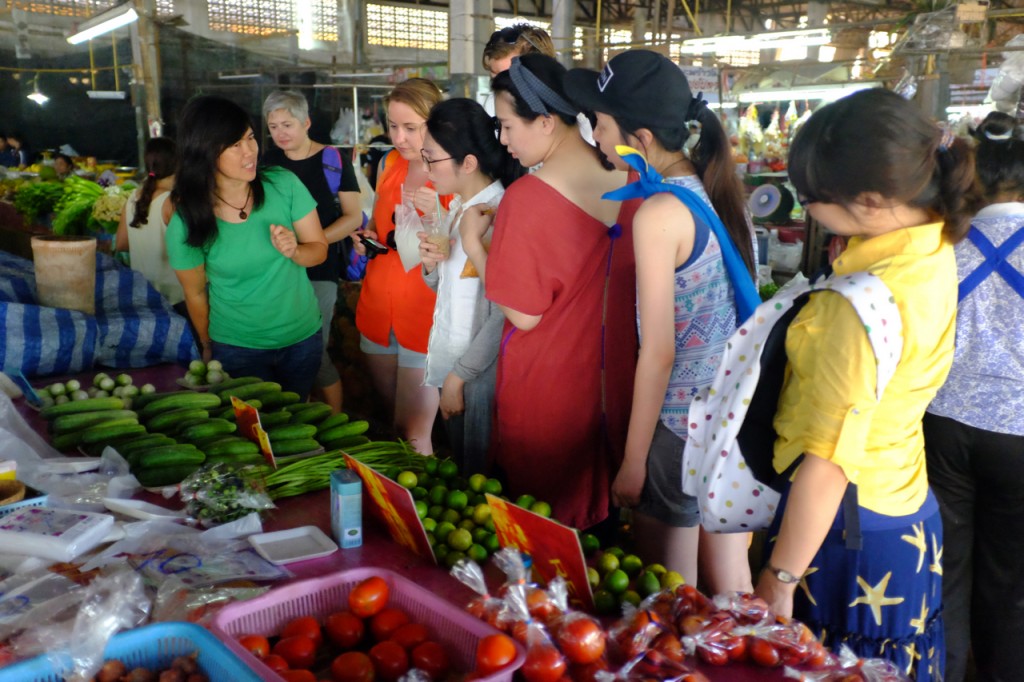 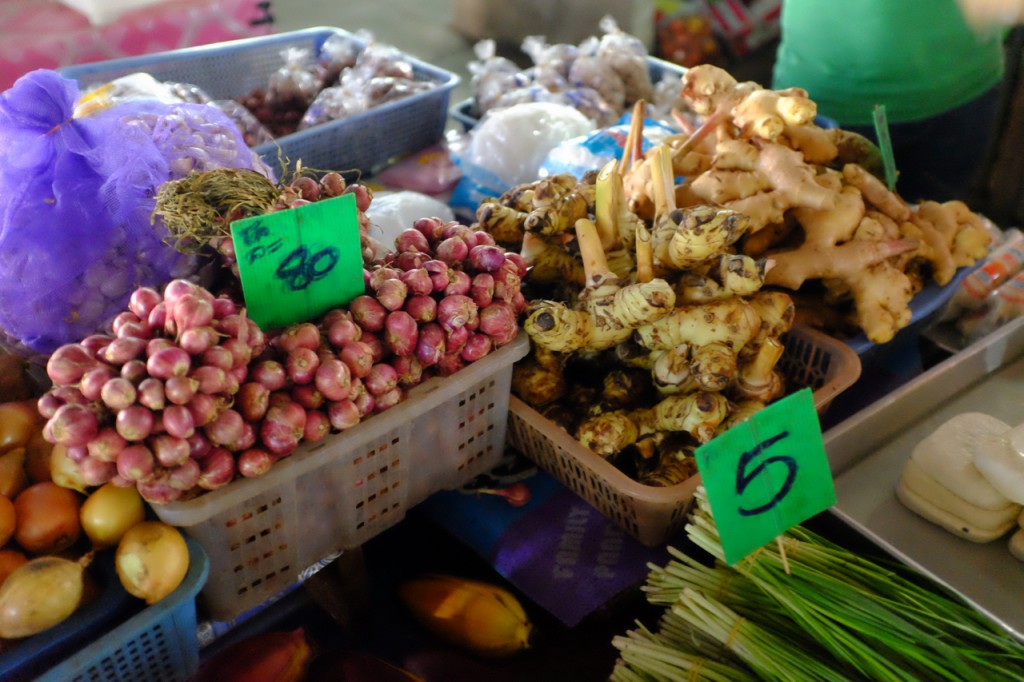 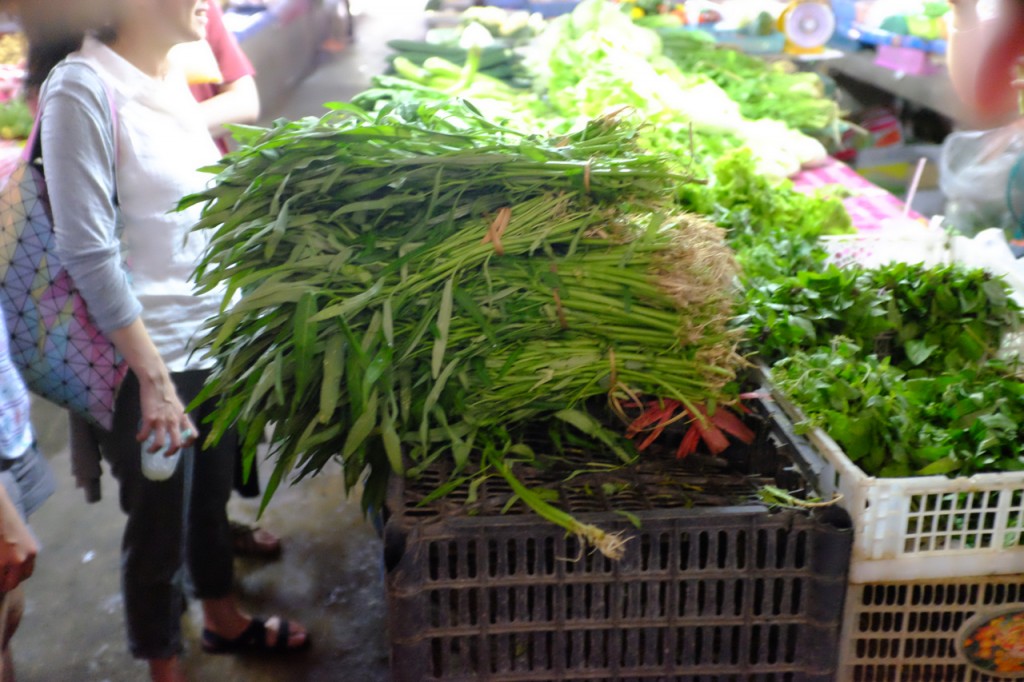 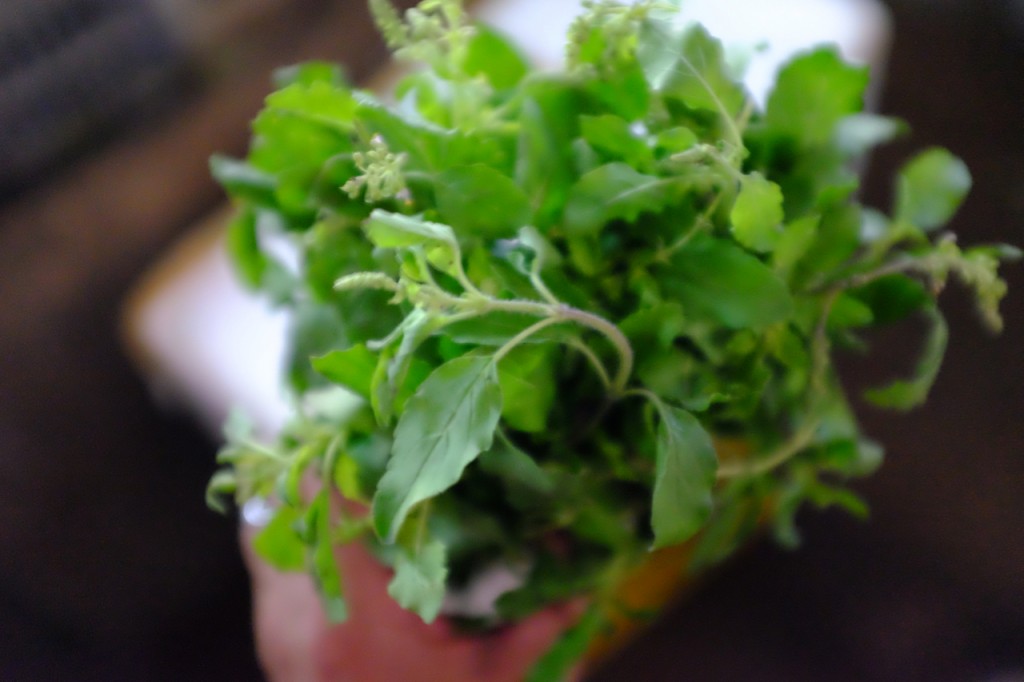 Of course, Jette made a new friend while we were there: 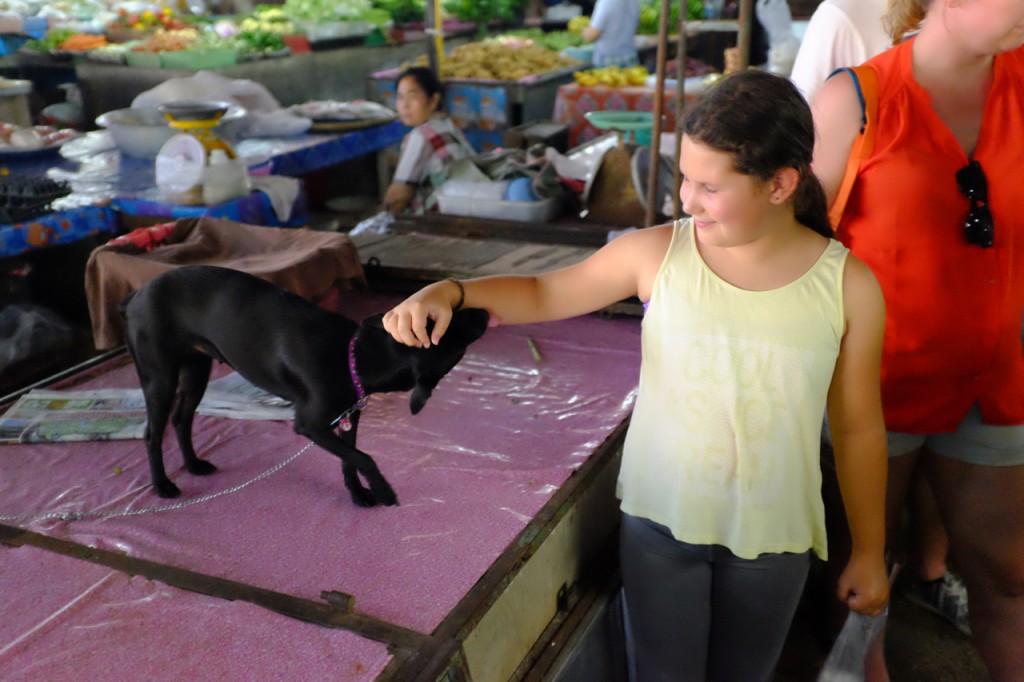 After the market it was back to Yui’s house for an afternoon of cooking. We learned how to make perfect, crispy spring rolls that are NOT at all greasy. The secret is in the temperature of the oil, the rolling technique, and a secret ingredient. 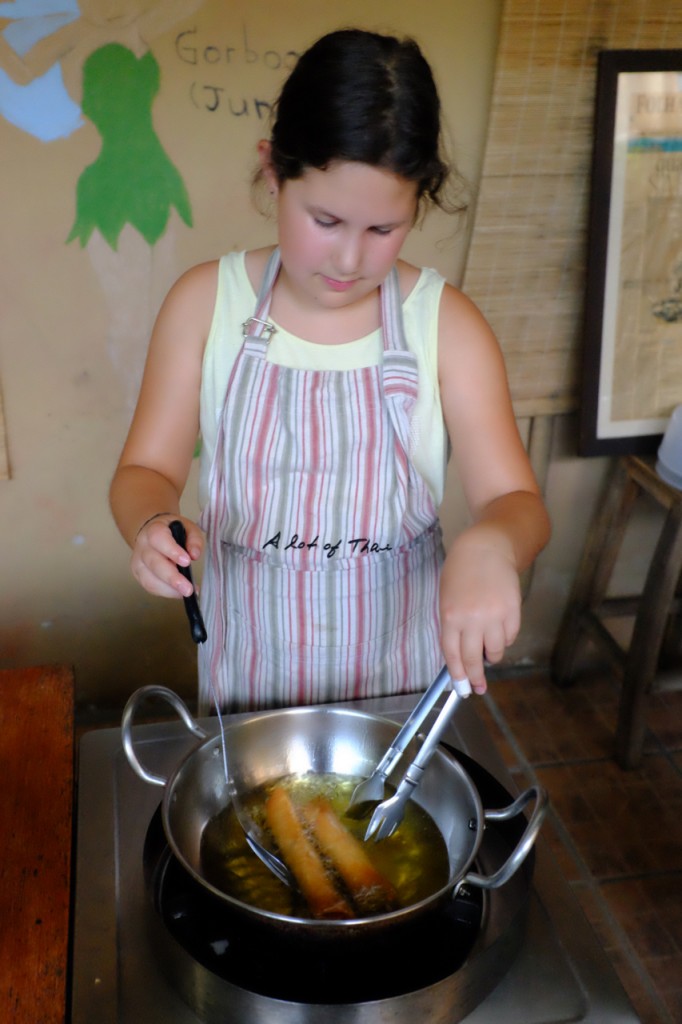 The master at work 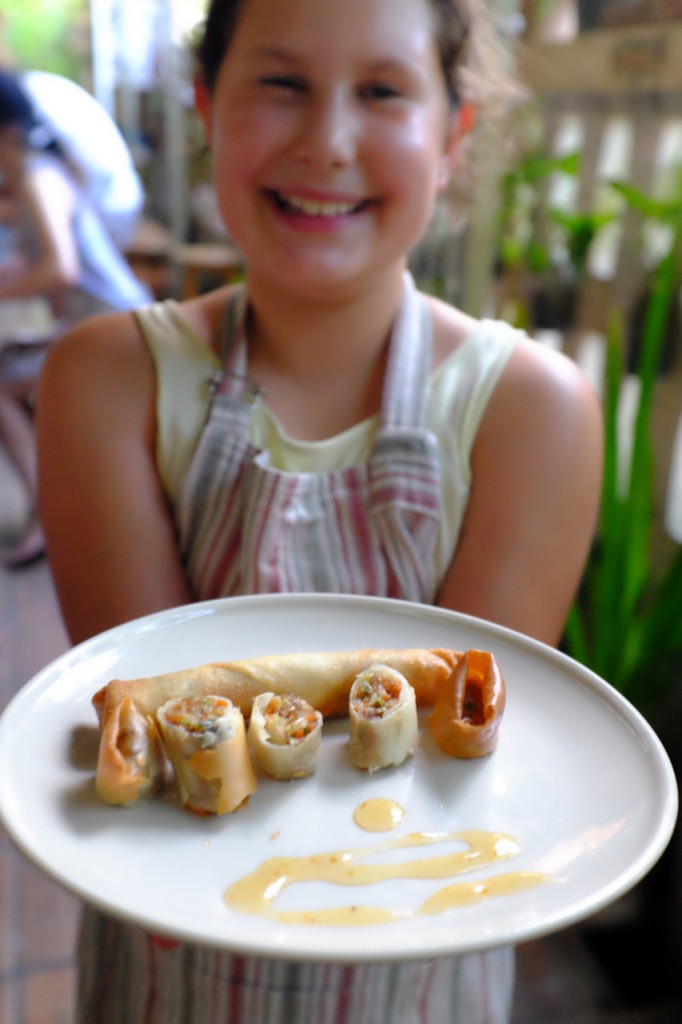 The last dish of the day was the one that I was the least interested in: mango sticky rice. It turned out to be one of the highlights. When done well, it is subtle and super-delicious! We leaned how to do it well and about rice varieties and cooking methods in the process. 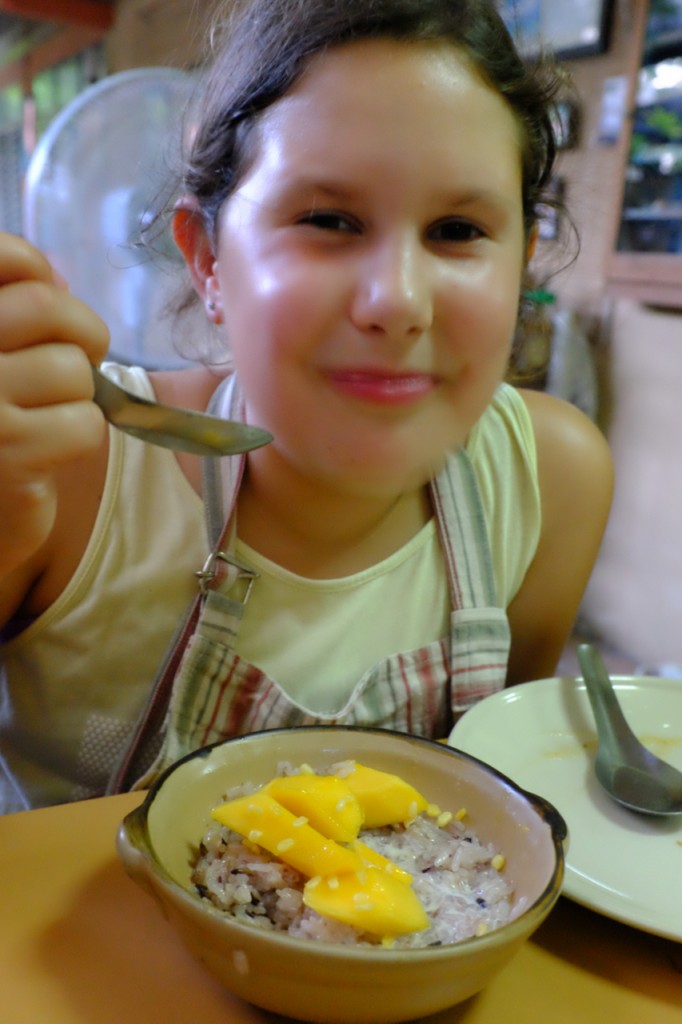 All-in-all it was a fun, fantastic day. We all learned a lot at A Lot of Thai. Thanks Yui!

As you might expect Jette loved it and is on her way to becoming a super-cook. I can’t wait to get home and have her cook me some yummy Thai food. Maybe you’ll get lucky too!