Today we took the train from Strasbourg, France to Mainz, Germany. We rode 7.75 km.

We woke up early, packed the bikes and rode a few blocks to the train station. Getting the bike to the platform was easy. We rolled right into the station and there was an elevator to the platform. We were able to leave all the bags on the bikes and simply roll them into the elevator, one-by-one. Once we were up on the platform, Mila and Jette ran back down to get breakfast and snacks for later. Fully provisioned, we made our way down the platform. The train was already there,standing empty but the doors were locked. After half an hour or so, they powered up the train and unlocked the doors. Thankfully it was one of the commuter trains where the floor of the train is level with the platform, so when the unlocked the doors, once again we simply rolled the bikes on, fully loaded. So nice! 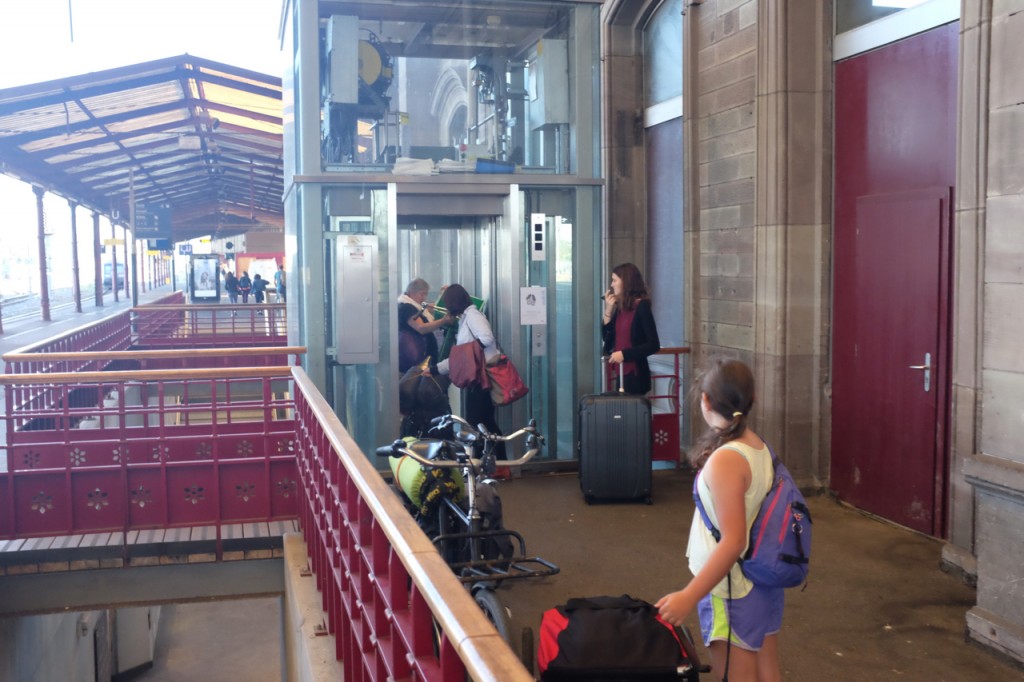 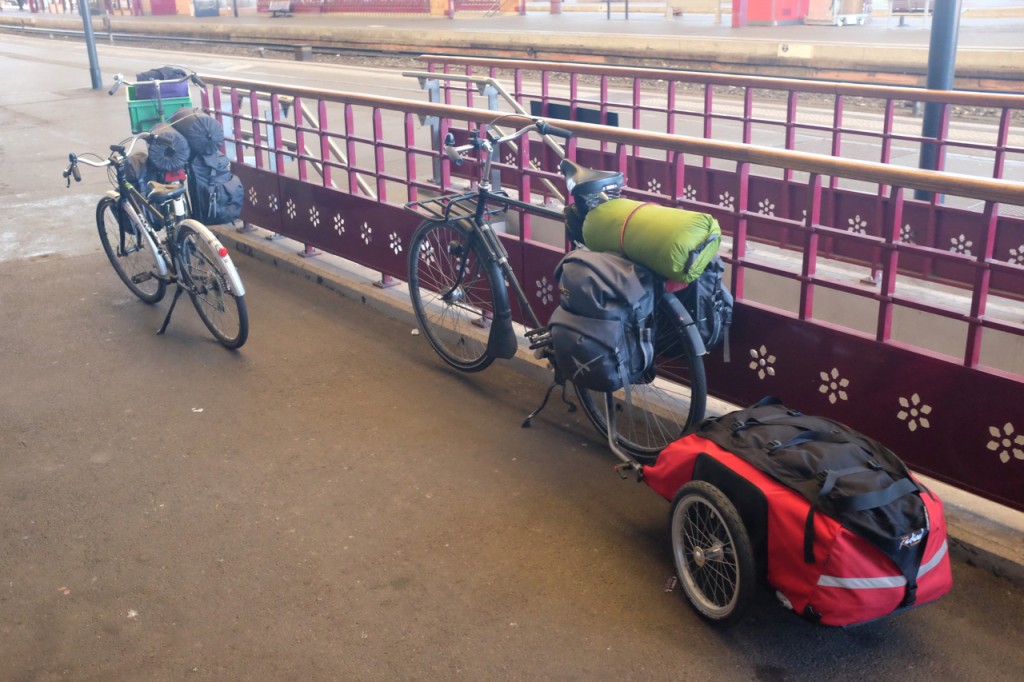 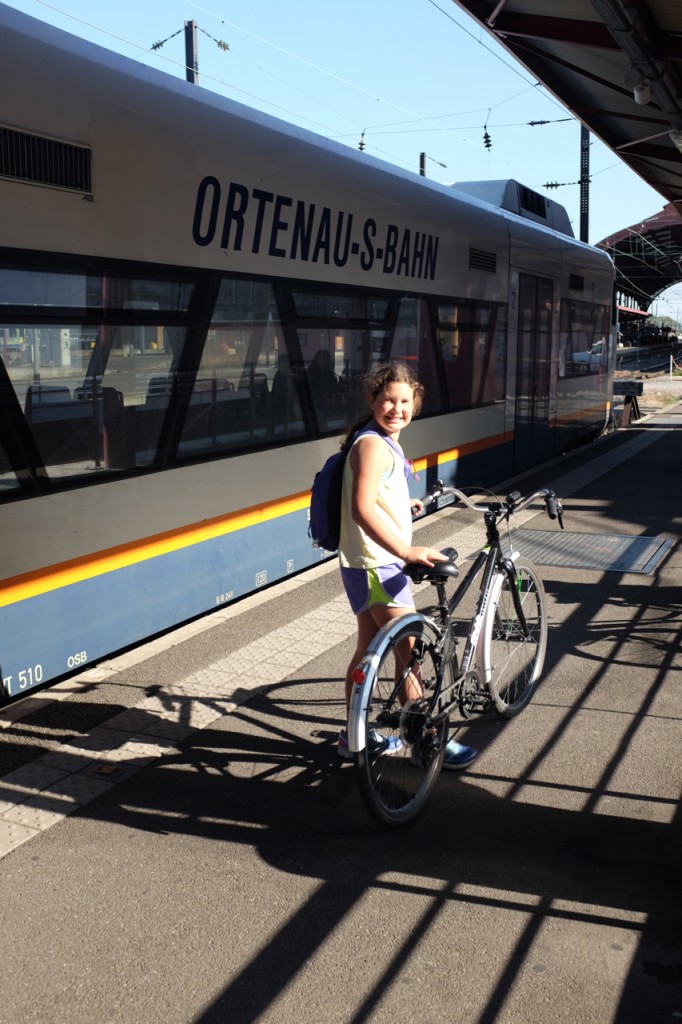 The first train of the day 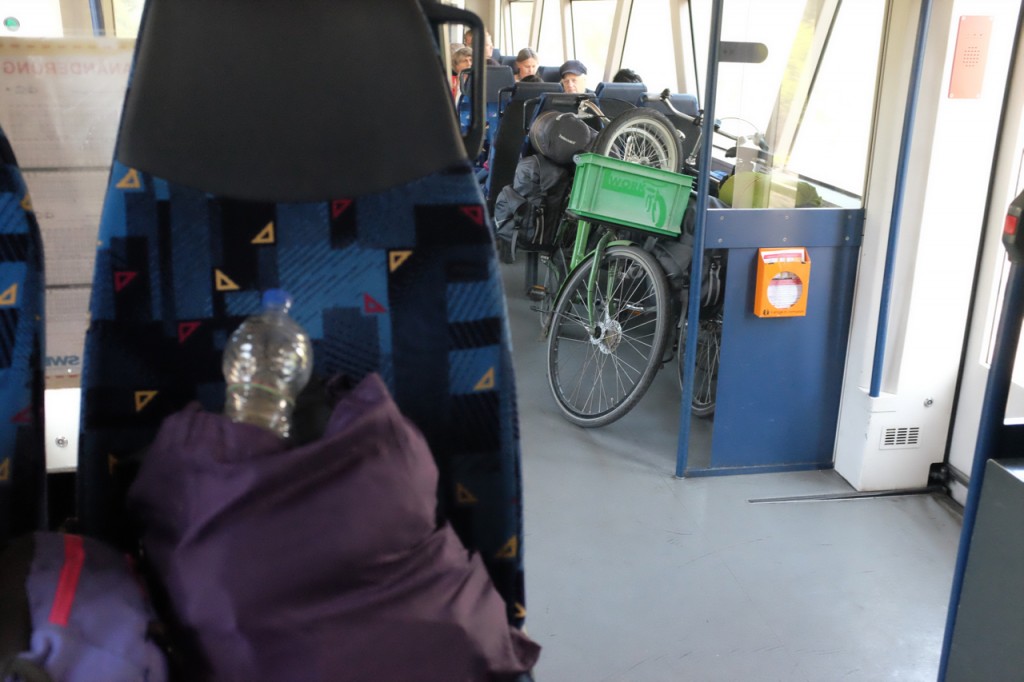 Bike on the train 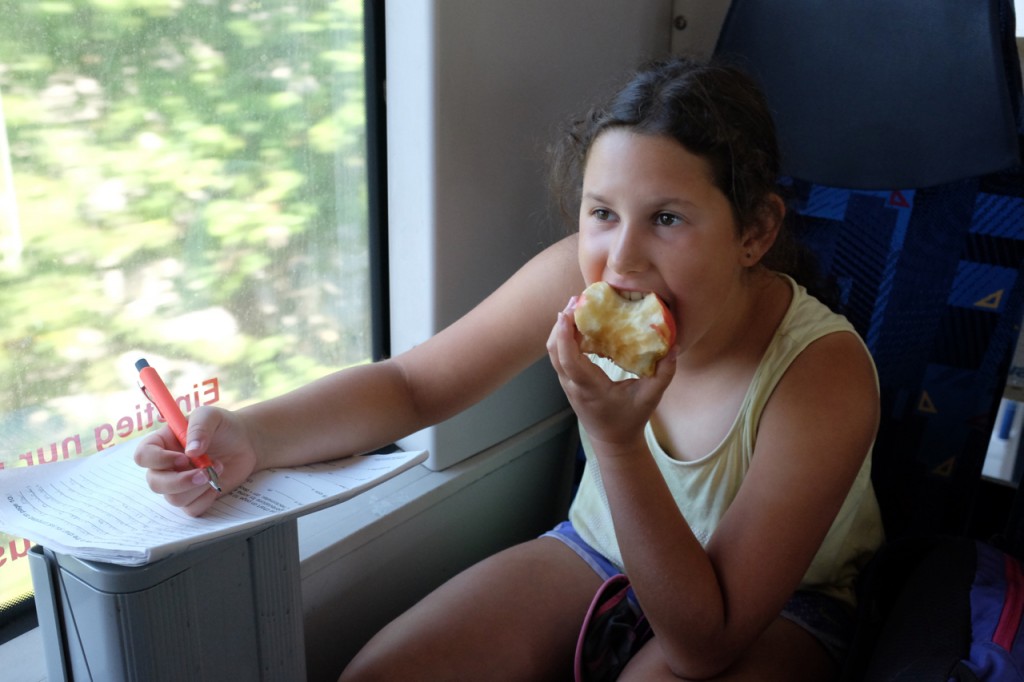 About twenty minutes later we rolled the bikes off in Appenweier. The plan was to go to the ticket agent there and buy tickets for Mainz for us and the bikes. The train pulled away and we were left standing on an empty platform. There was no station, no ticket agent. Just the empty platform of a suburban commuter station. Thankfully there was a ticket machine. Using the ticket machine we were able to find the trains to Mainz and purchase tickets for ourselves. The only problem was the bikes. The schedule said that reservations were required to transport bicycles on that route, but the ticket machine did not let us make reservations, nor did it tell us how we might do so. With no other options, we decided to simply do it, and ask for forgiveness not reservations! 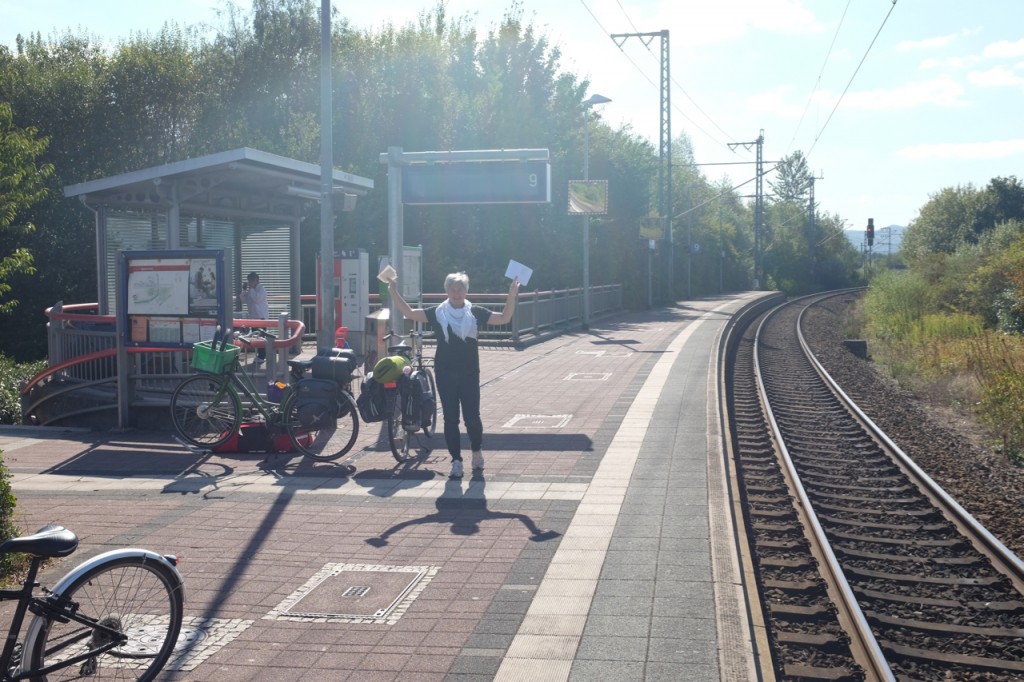 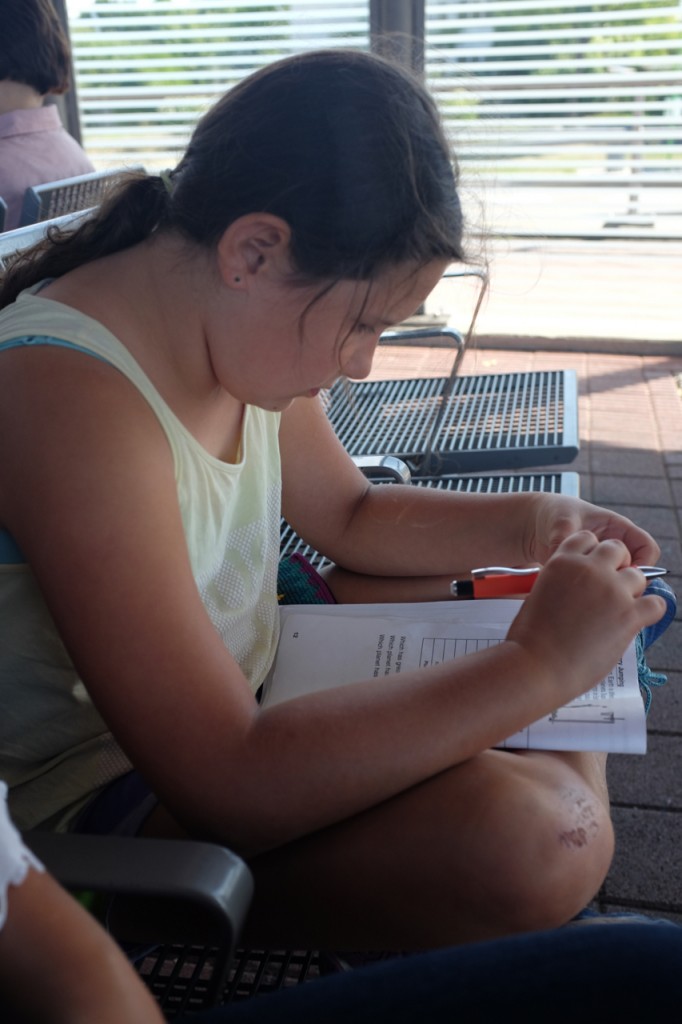 More math while we wait for the next train

As we stood waiting on the platform, we realized that the tickets said “Platform 1” and the platform we were waiting on had a sign saying “9.”  Odd. There were no other platforms in sight. This appeared to be a one platform station. Adjacent to the ticket machine Mila found a display which showed a map of the station. Cleary there were other platforms out of view. We hopped on our bikes, rode down the sidewalk, around a corner, along a street under an overpass and back up on the other side where there there two more platforms. (Still no station or ticket agents). Whew! That was a close one. Our train arrived and once again it was a regional commuter. We rolled the bikes on to a busy train and they just fit. There was some contortionist action necessary but we were on. A few stops later, off again and another train. This time it was a regional express. Almost empty. We had to unload the bikes this time, but there was plenty of room for bikes and bags, and it was pretty easy to split them across two cars. It was a comfortable ride and we looked out the window to changing scenery. Flatlands and corn fields were being replaced with rolling hills, vineyards, and large, modern windmills. The conductor announced Mainz as the next stop. A rushed dance of bikes and bags and we were standing on the Mainz platform with the train pulling away. 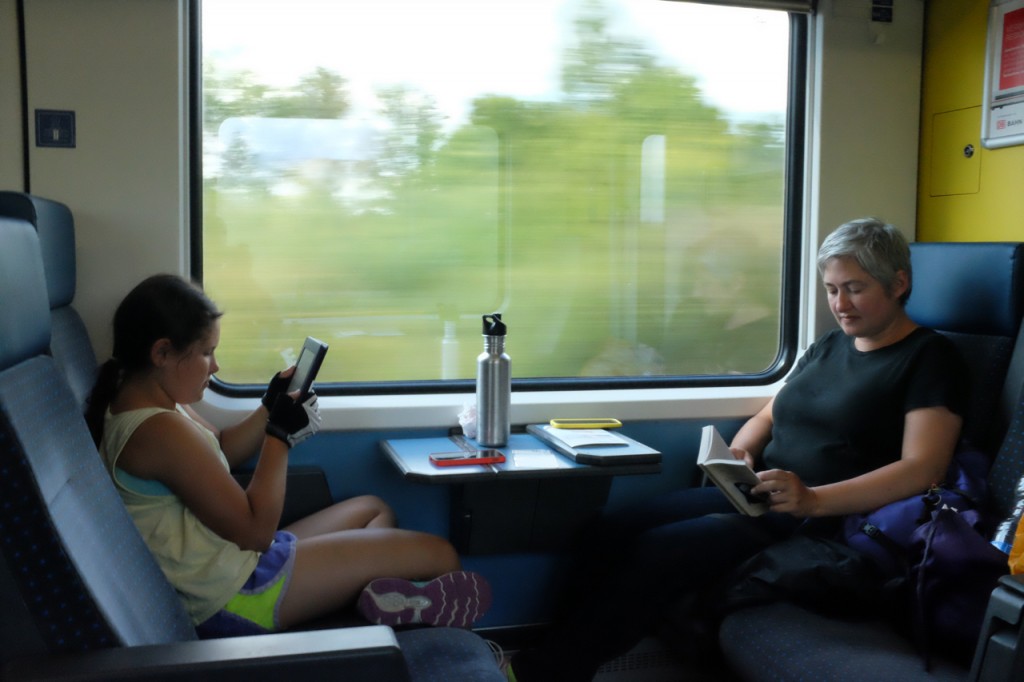 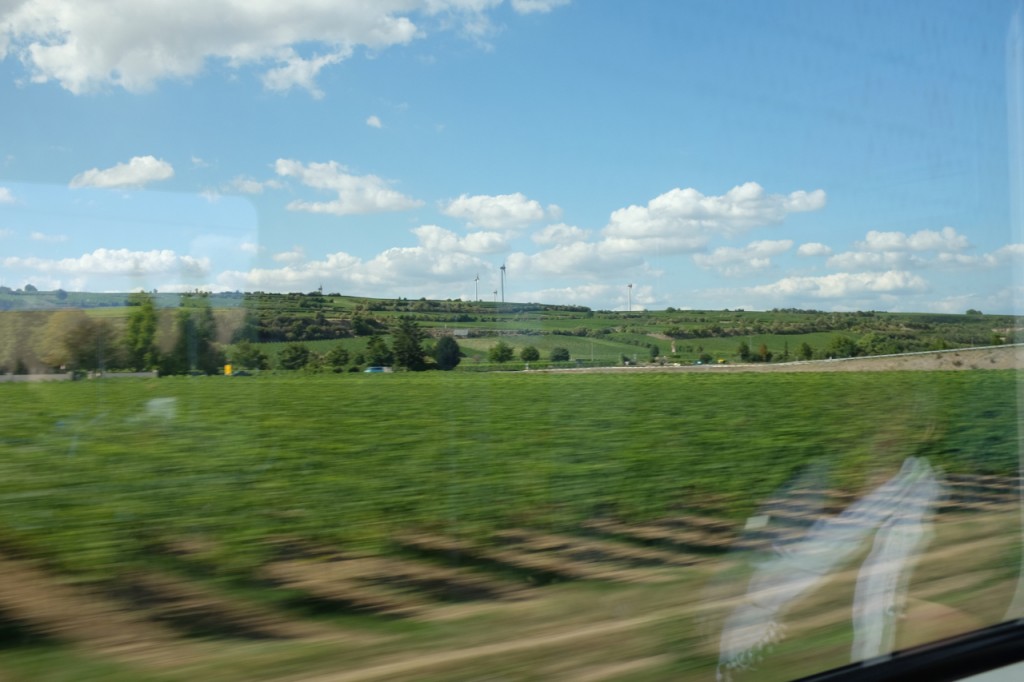 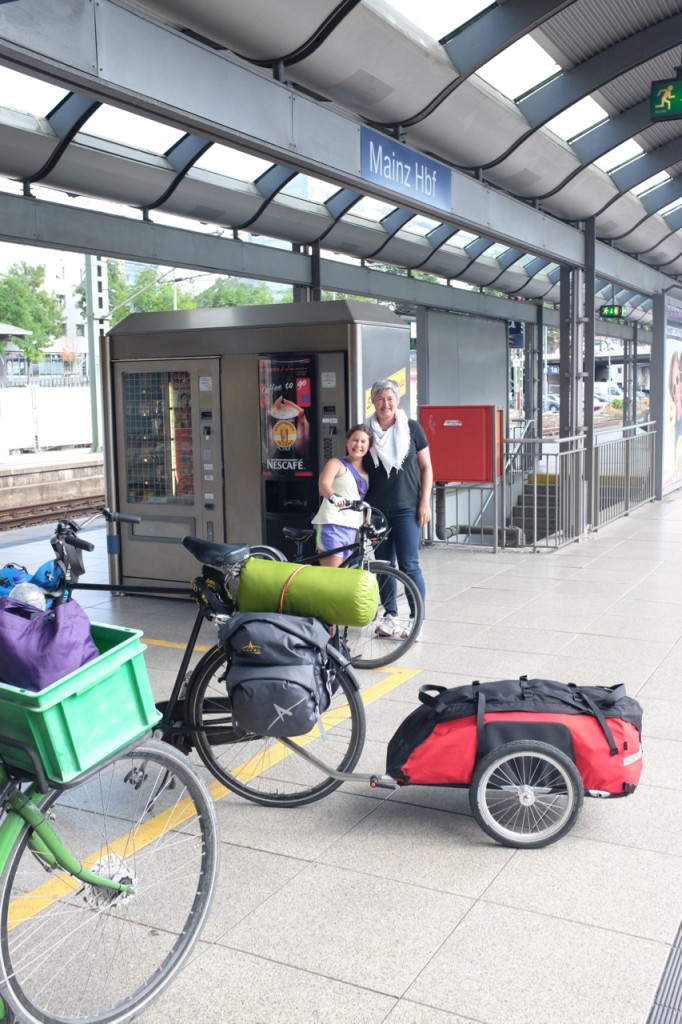 Two elevators later we rolled out of the station and into traffic of the city. We made our way across town to the Gutenberg Museum. Yes, that Gutenberg. You know, the German dude with the printing press and the bible who effectively ended the Middle Ages, ushered in modernity, and utterly transformed the world? Yeah, him. OK, perhaps it wasn’t him alone, but he was a pivotal figure and his printing innovations helped to user in the Renaissance, the Scientific Revolution and the Protestant Reformation. 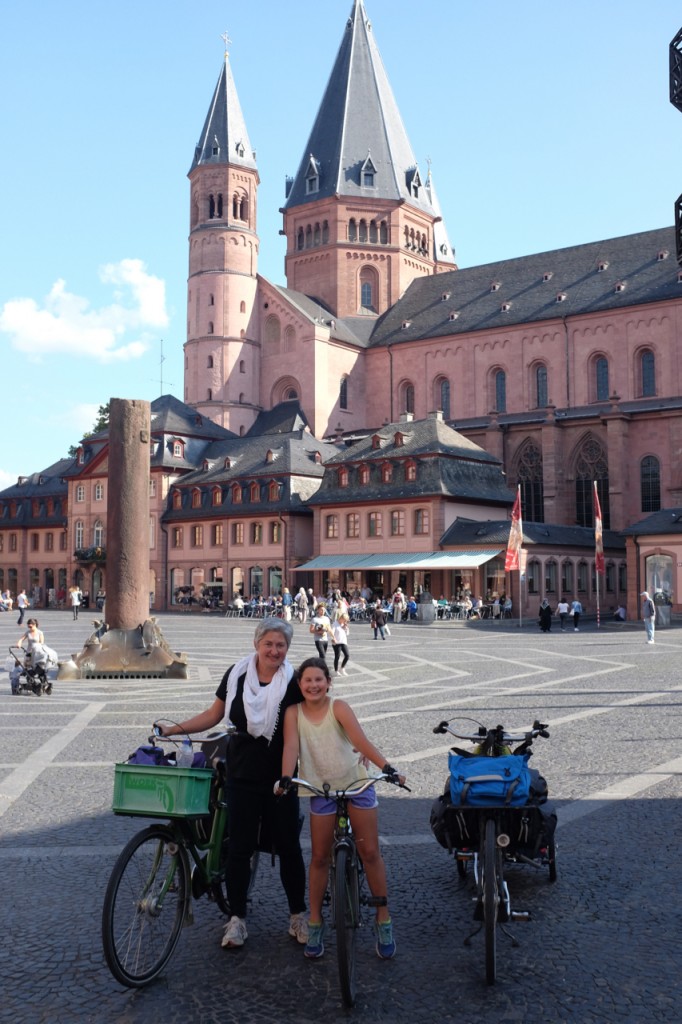 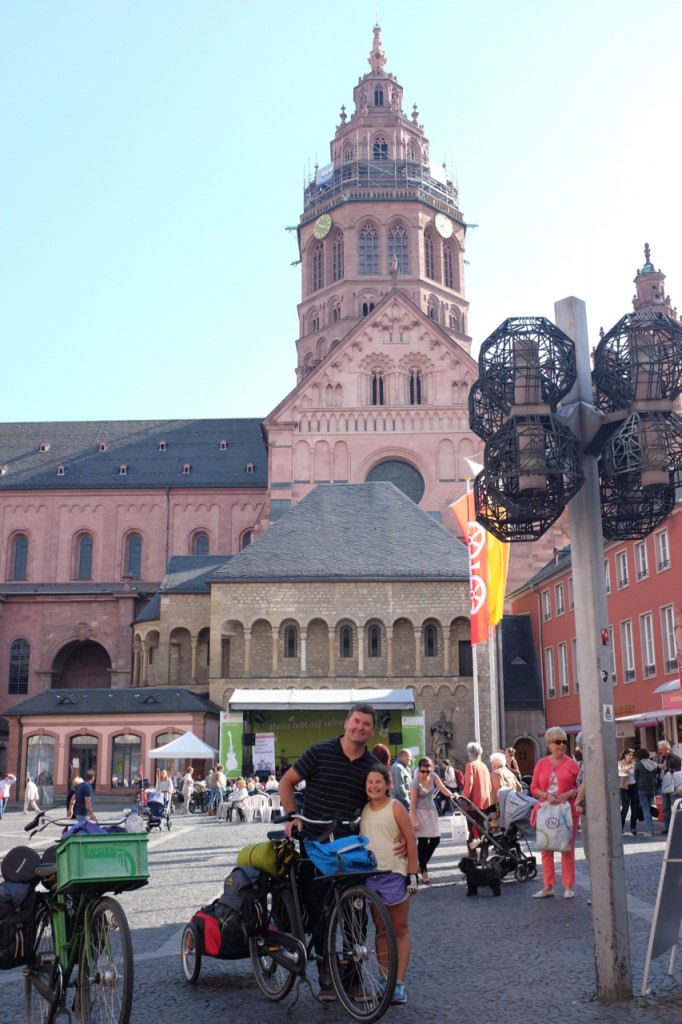 Waco and Jette in Mainz 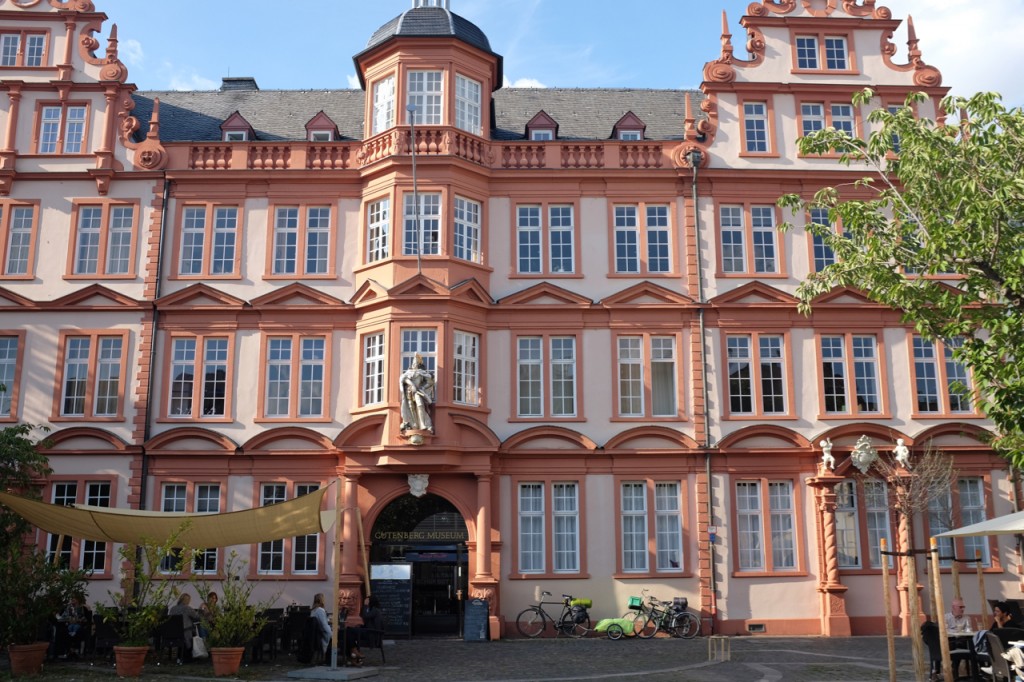 Our bikes parked at the Guterberg Museum 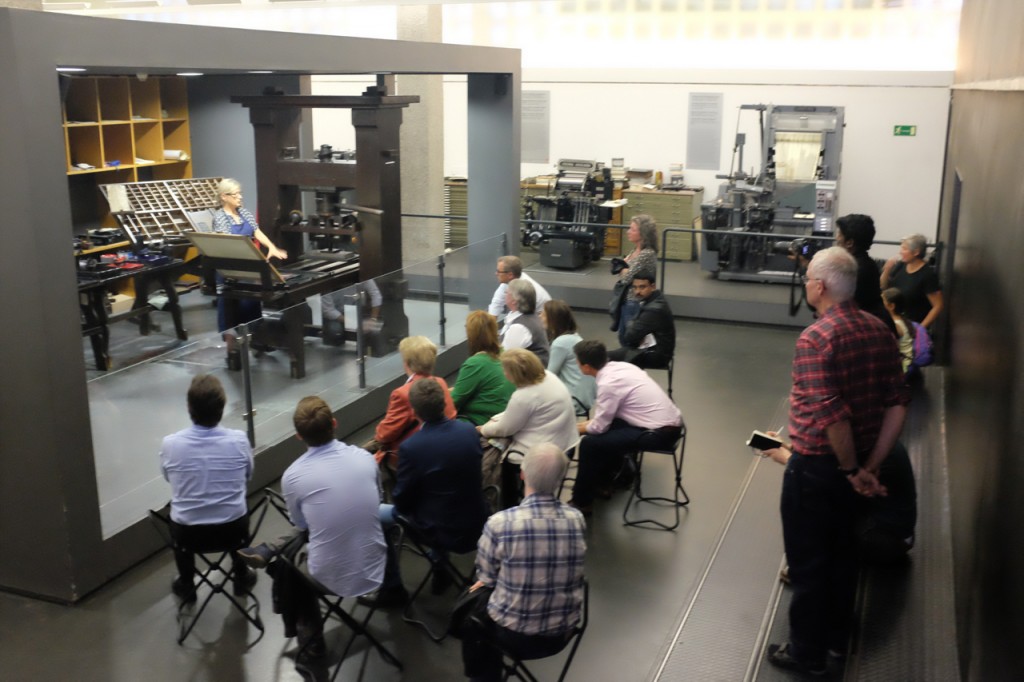 Printing demonstration at the Gutenberg Museum

It was a very nice museum with a large vault room housing original Gutenberg Bibles and a large collection of pre-Gutenberg hand written books of incalculable value, presses of various types and four floors of exhibits to put it all in context. Photography was not allowed, except for the printing demonstration.

After the museum it was time for fuel (a.k.a. “food”). Across the plaza from the museum were a number of restaurants. Jette went straight for Taco Kidd, the first “mexican” food we had seen for some time. The folks there were super nice and fixed Jette up with a bean and cheese burrito. It wasn’t Tex-Mex but it was good. 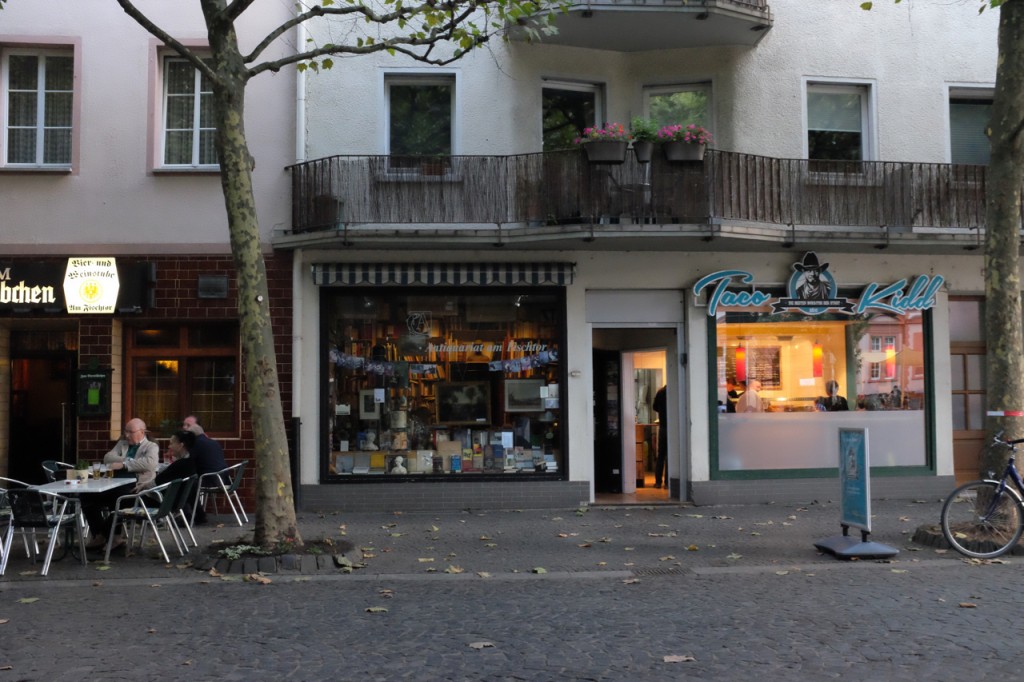 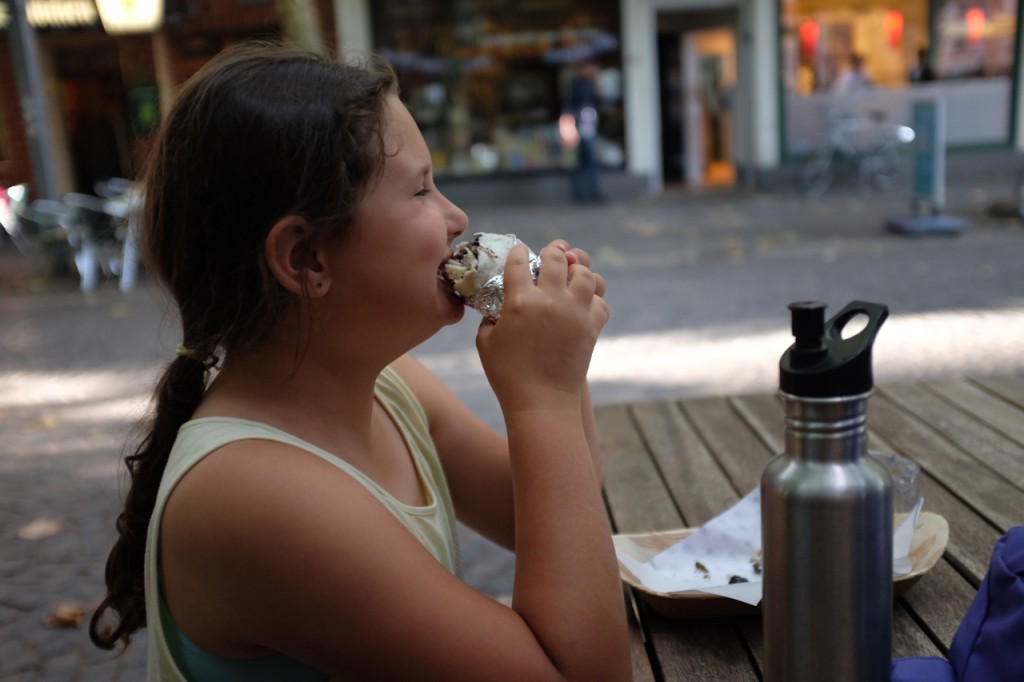 Mila and I opted for one of the plaza cafes where she had beef tips (yes, you read that right, Mila ate beef tips! When in Rome…) and I had a really delicious salad. The only photo I shot of Mila has her with her eyes closed, so I’ll post this one of our smokey neighbors on the patio. It is still shocking how many people in Europe still smoke, and smoke constantly. You can’t see it in this photo, but all of these guys were smoking non-stop. D-i-s-g-u-s-t-i-n-g but typical. Despite the smokies, it was a nice dinner. 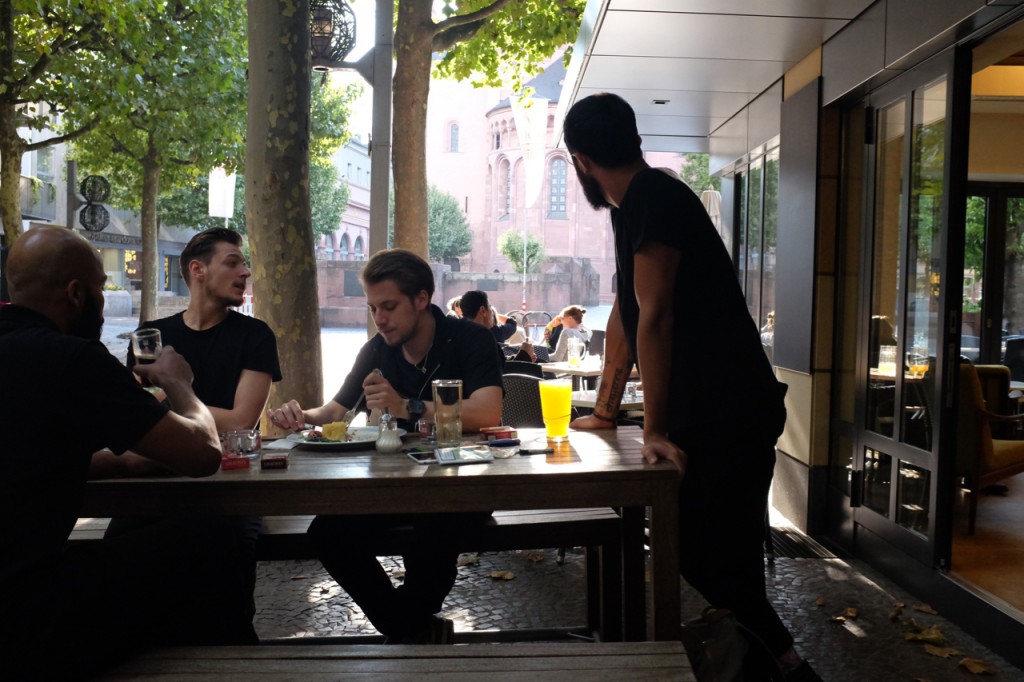 As the sun was getting low, it was starting to get chilly. In fact some of the trees think it is already Fall. 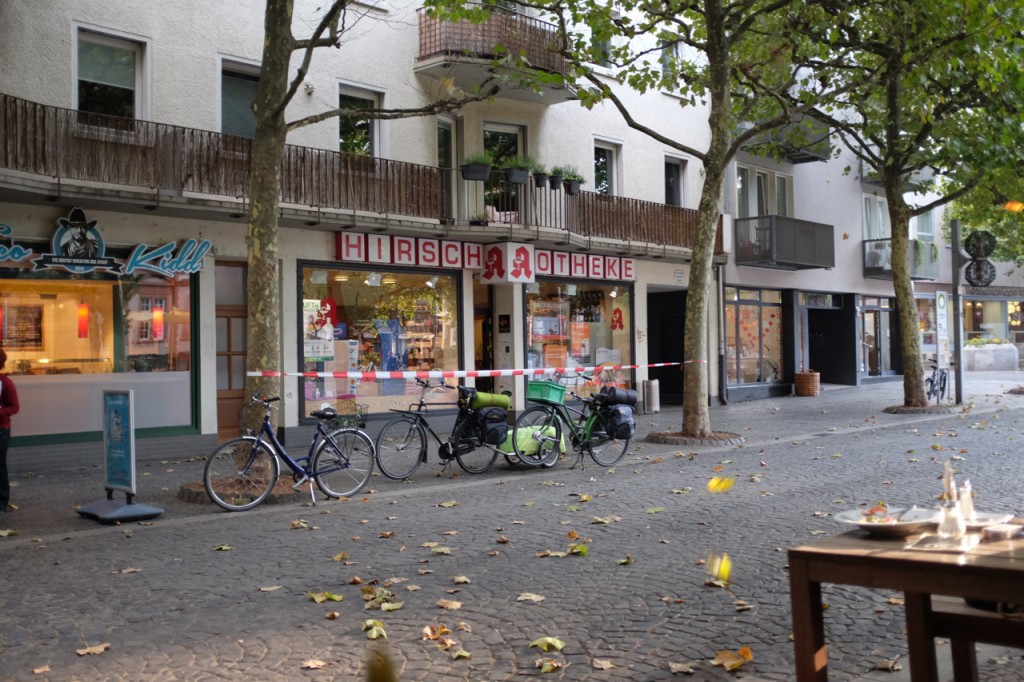 Our bikes and fall leaves

After dinner we rode across the river to our campsite. We crossed and rode along the biggest and busiest road we have seen for a long time, and then up and over a big bridge. The noise from the traffic was jarring. After the quiet country roads, canal paths and forest trails, the noise, foul air and general chaos of the city traffic was a shock to the senses. 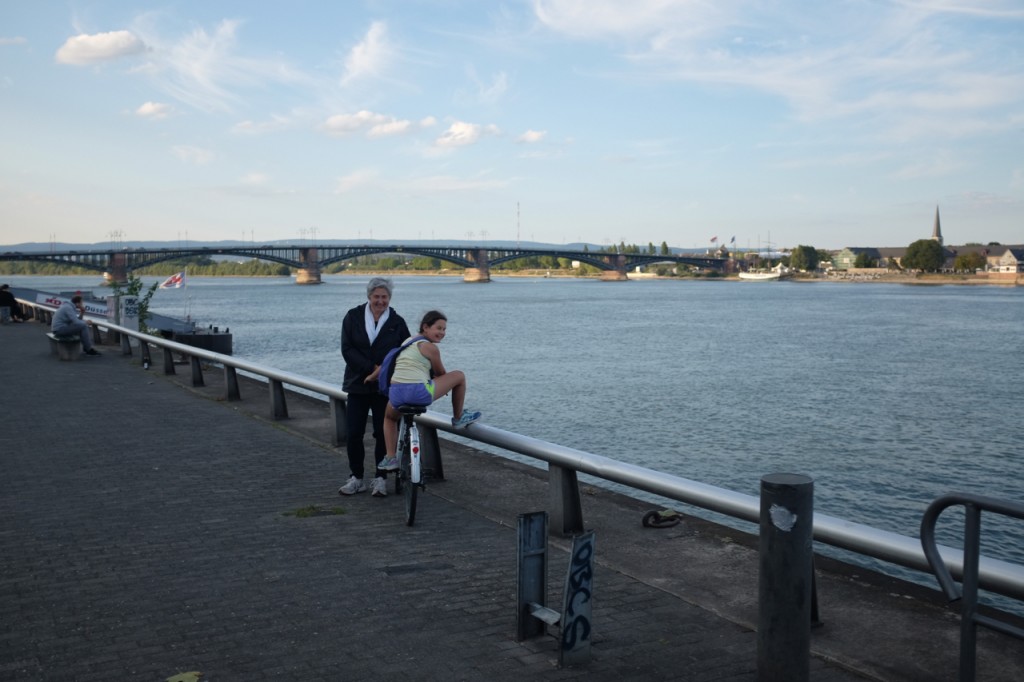 Looking across to our campsite 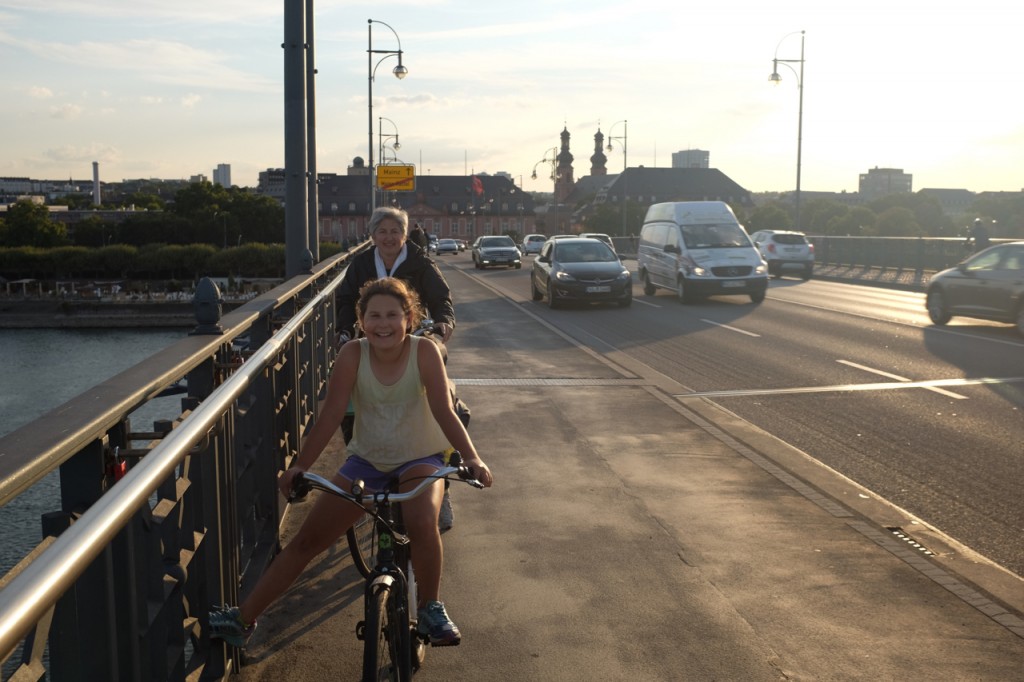 The campsite was right across the river, with a great view of the city. The location made up for  a grumpy proprietor who seemed more interested in smoking and drinking on the patio than assisting guests. While we were setting up camp, we met Alan from Alaska, a super nice guy who had just arrived in Europe and was beginning a bike tour of his own. His plan was to ride up the Rhine to Rotterdam and then South West along the cost of France and possibly Spain. We spent probably an hour or more talking that evening and then again in the morning. He’s cycled the continental US East-West from coast to coat and North-South from border to border. He’s even cycled through Alpine, Texas ;-). Alan, if you read this, we wish you safe travels and tailwinds!

We haven’t had a pop quiz for a while, so here you go kiddos: