Day 14: Mainz to Rudesheim am Rhein

Today we rode 34.94 km from Mainz to Rudesheim am Rhein.

We had nowhere to plug in last night, and our camera batteries are dead. Photos today are from my phone, which doesn’t always like to focus, so some are blurry. C’est la vie.

I got up a couple hours before Mila and Jette and had a hot tea. It was a chilly morning and my sleeping bag had been too light for the night before. I drank the tea and walked around the campground to warm up. Alan was up and we talked for an hour or more. Mila and Jette woke up and we packed up camp and said our goodbyes to Alan. We rode back across the bridge into town to find breakfast and to get a warmer sleeping bag at the camping store we saw next door to Taco Kidd. 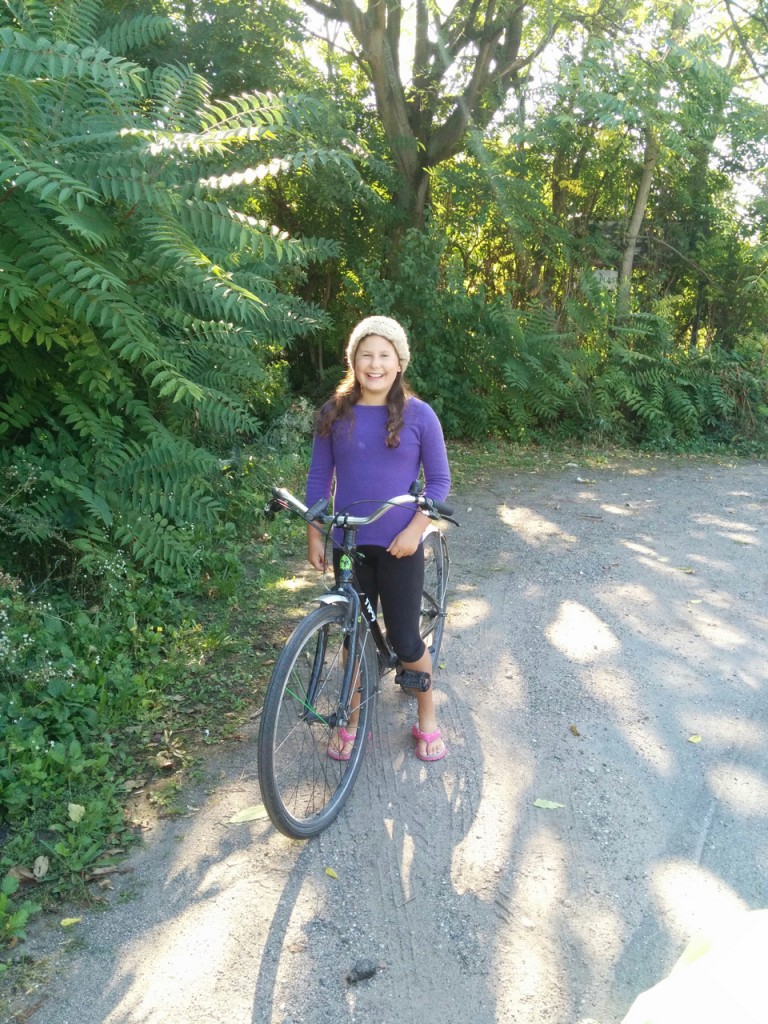 Jette looking cozy as we roll out of camp 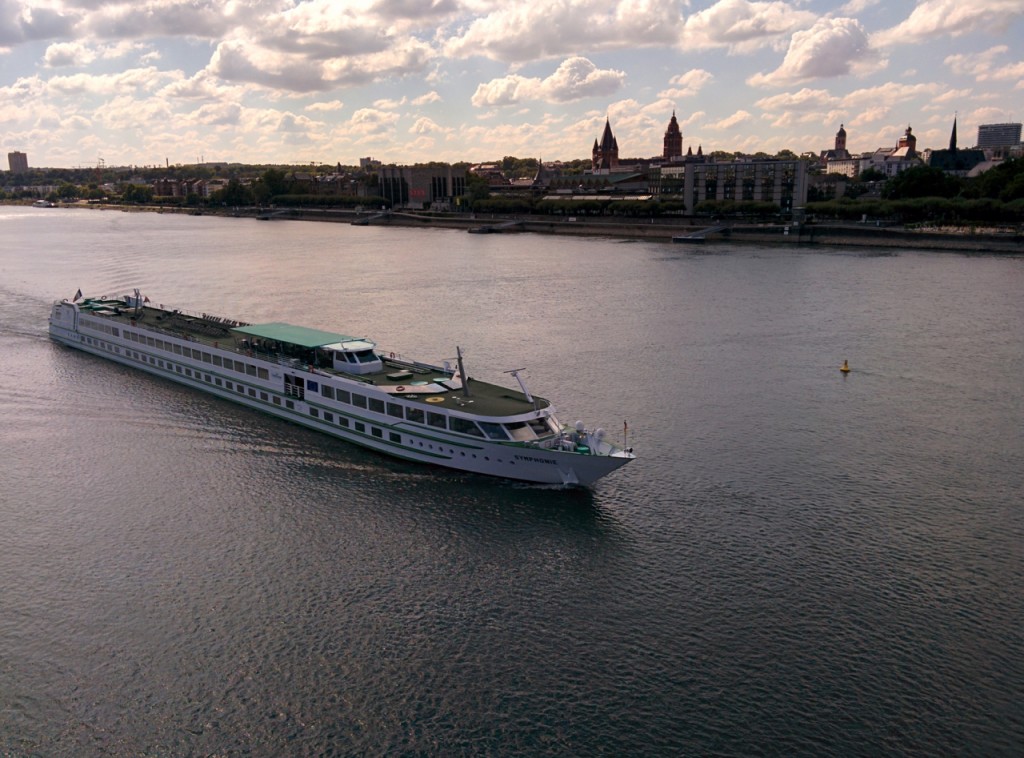 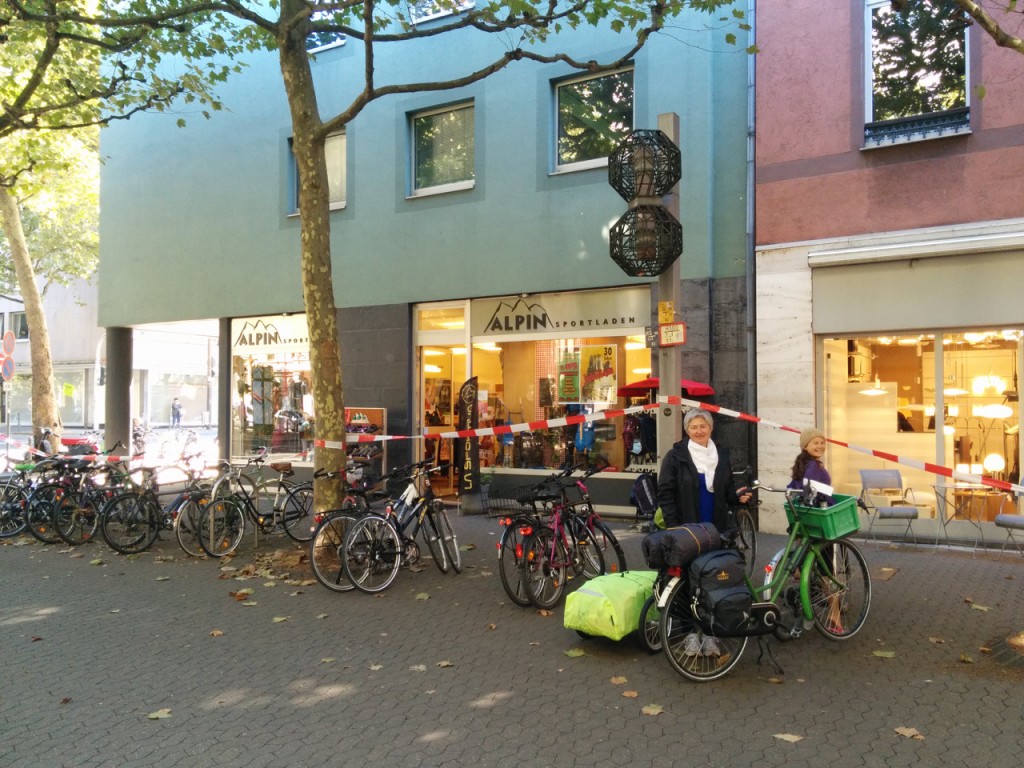 Stopped at the camping shop

With a new sleeping bag in hand we rode over to one of the main shopping streets to find breakfast and food for the road. We were slow and it was almost noon by the time we had crossed the river again and were back on the Euro Velo 15 route headed North. There was quite a bit of construction and a number of detours along the way and we got off the route a few times. Signage was poor around Mainz and that made it easy to get off route too.

We stopped for an ice cream break in sleepy little Wiesbaden. Ice cream seems to be a popular treat for touring cyclists and there have been surprisingly few ice cream shops along the route! 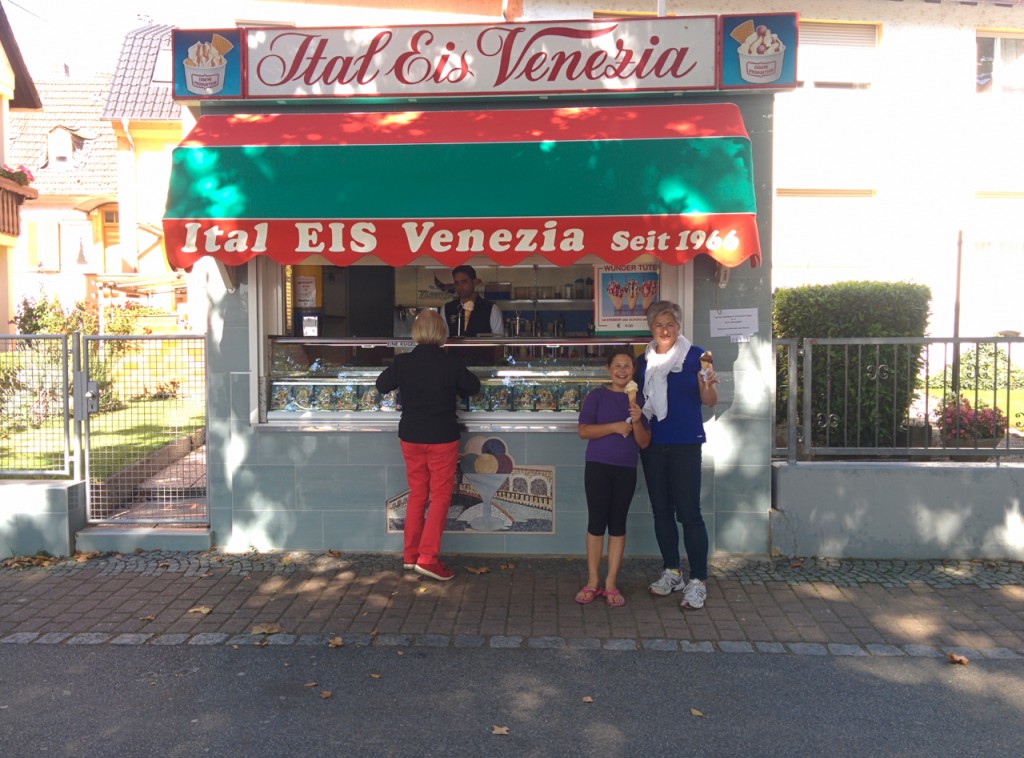 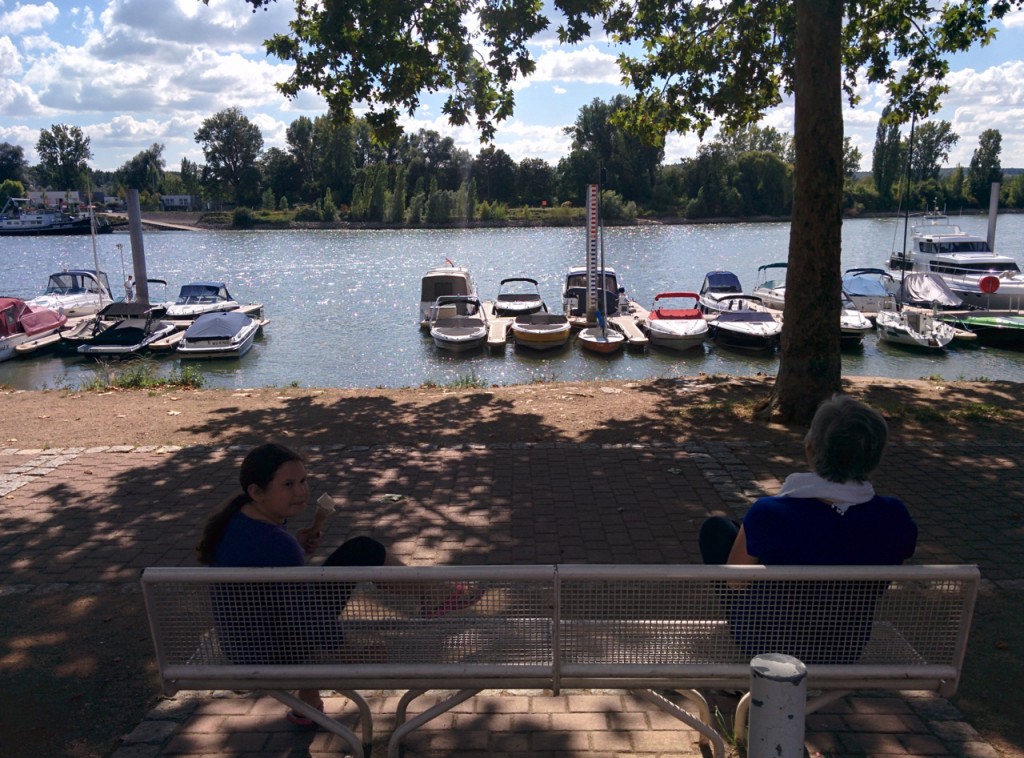 The weather was nice and we even had a tailwind for some of the day. That’s a treat. Unlike the Upper Rhine where there were virtually no boats, and the Rhone au Rhin Canal where we didn’t see boats until the latter part, this section of the Rhine is full of big ships coming from the Netherlands, the North Sea and beyond. We saw big container ships, barges, and tankers. 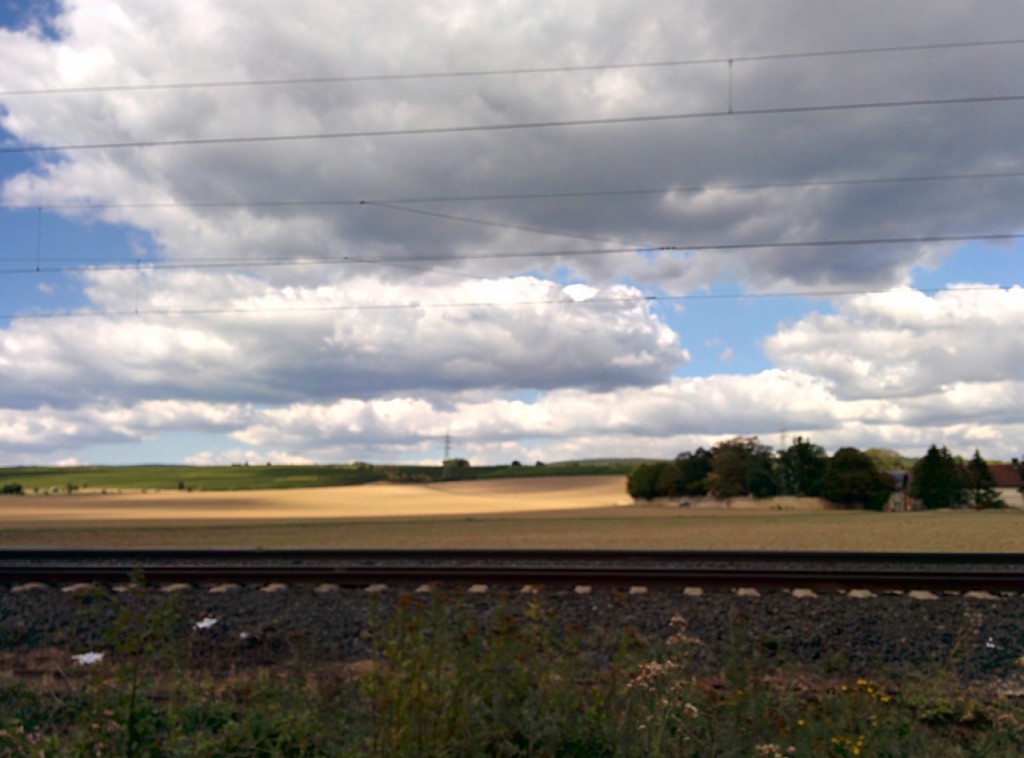 Pretty skies and no more cornfields! 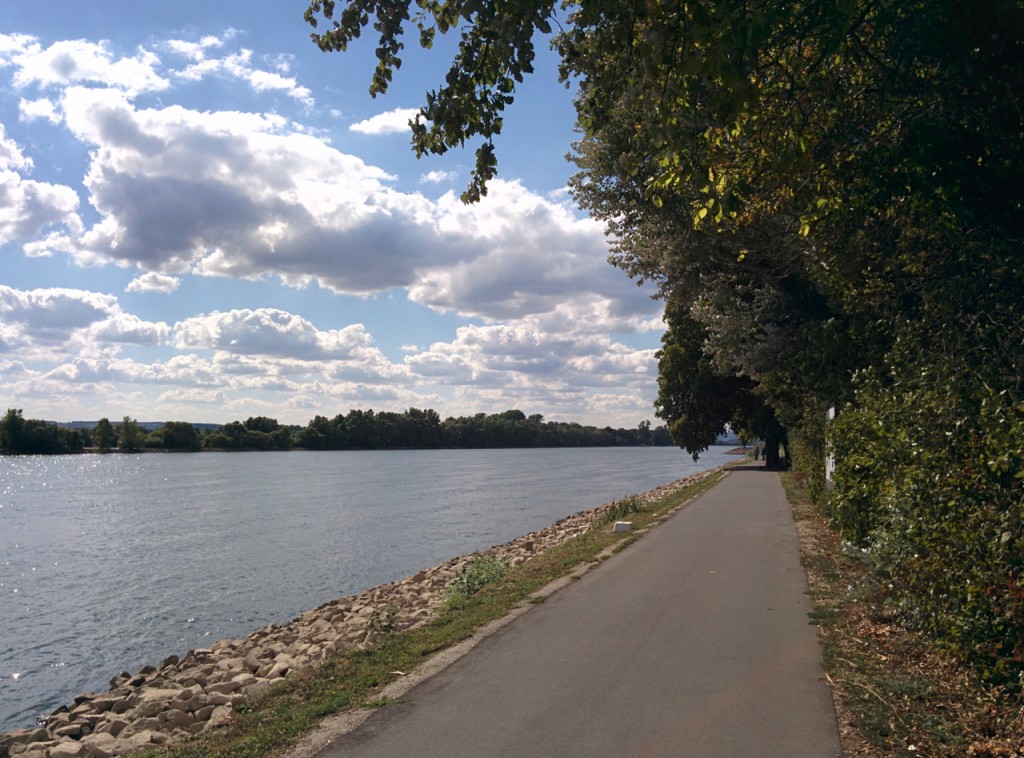 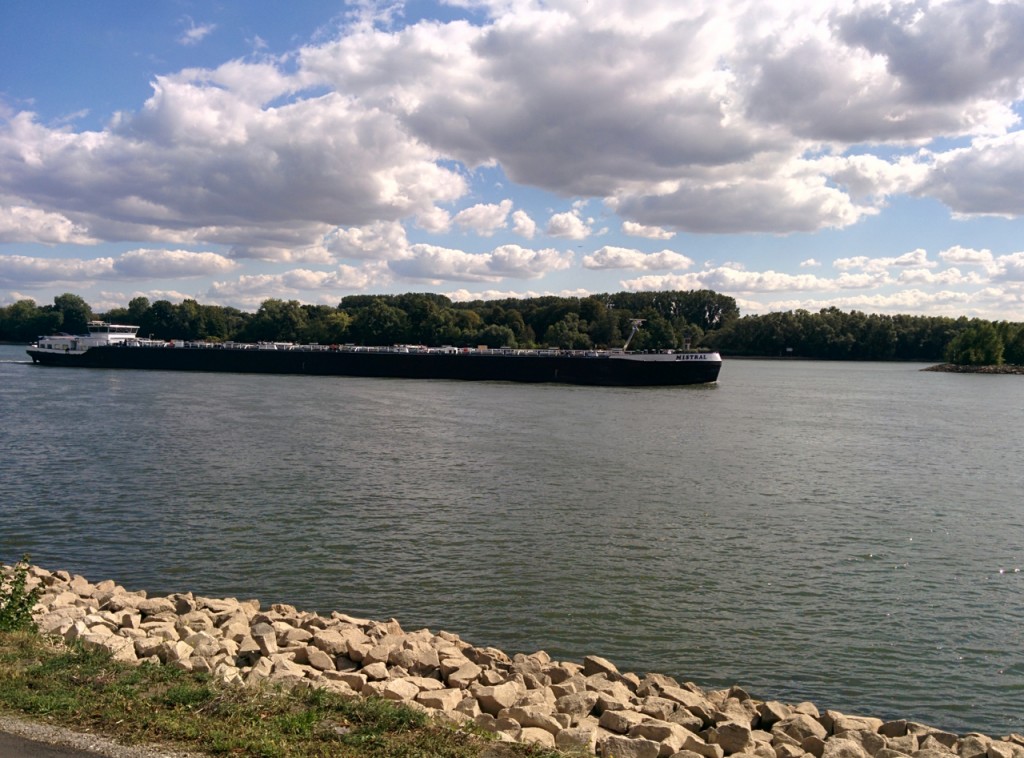 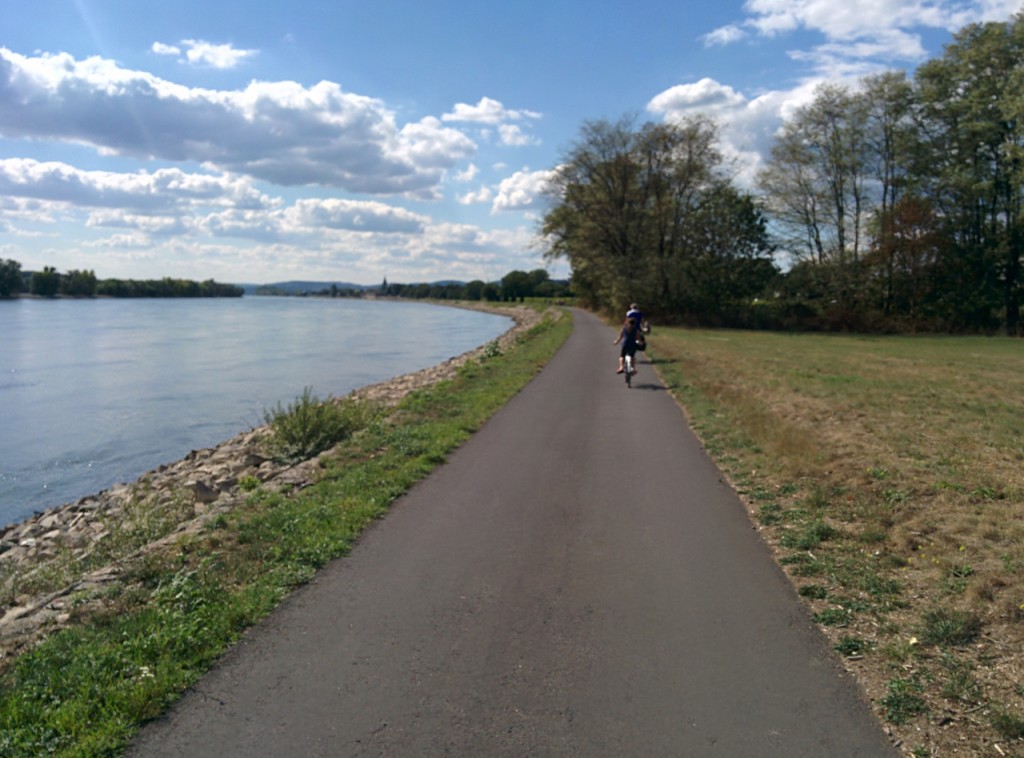 We stopped for a water break at Oestrich-Winkel where this is an old crane that was once used to loading and unloading wine barrels from ships. 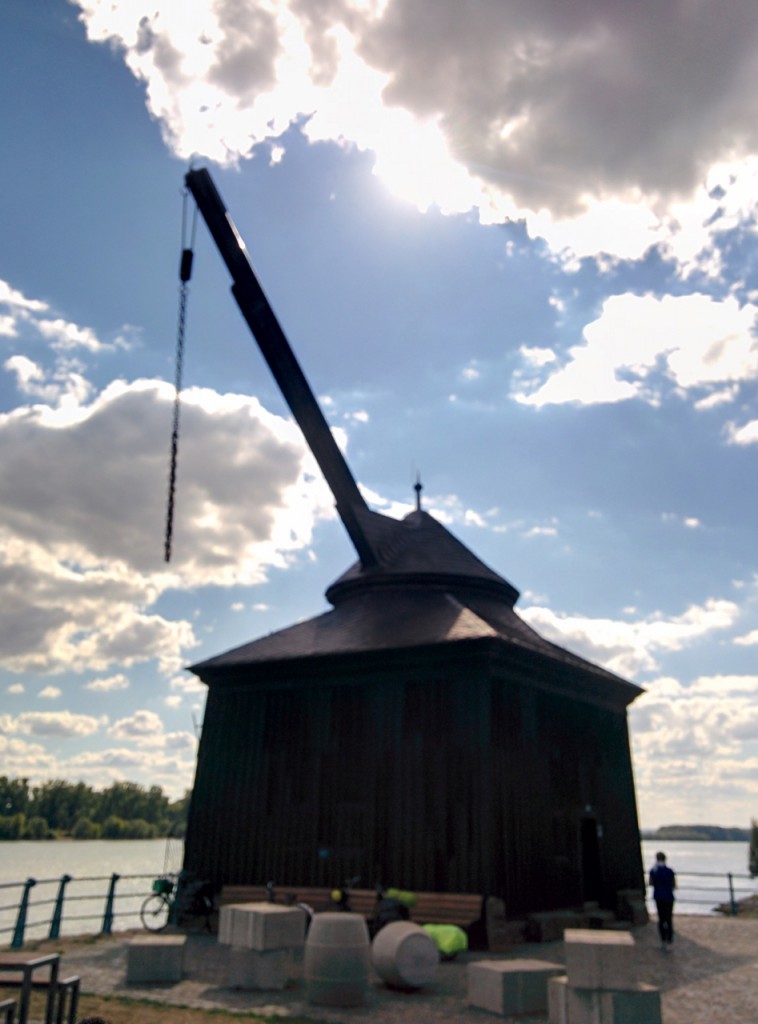 Built in 1745, the crane was powered by people on treadmills! Image two giant hamster wheels inside the crane, each with two men on them. Sound like fun? It was hard, dangerous work. Apparently it was not uncommon for the men to slip and fall in the wheels and have limbs crused by the machinery, or even to be crushed to death. I’ll pass on the human hamster job, thanks.

As we got closer to Rudesheim there were jetties built along the shore, often with little sandy beaches in their corners. 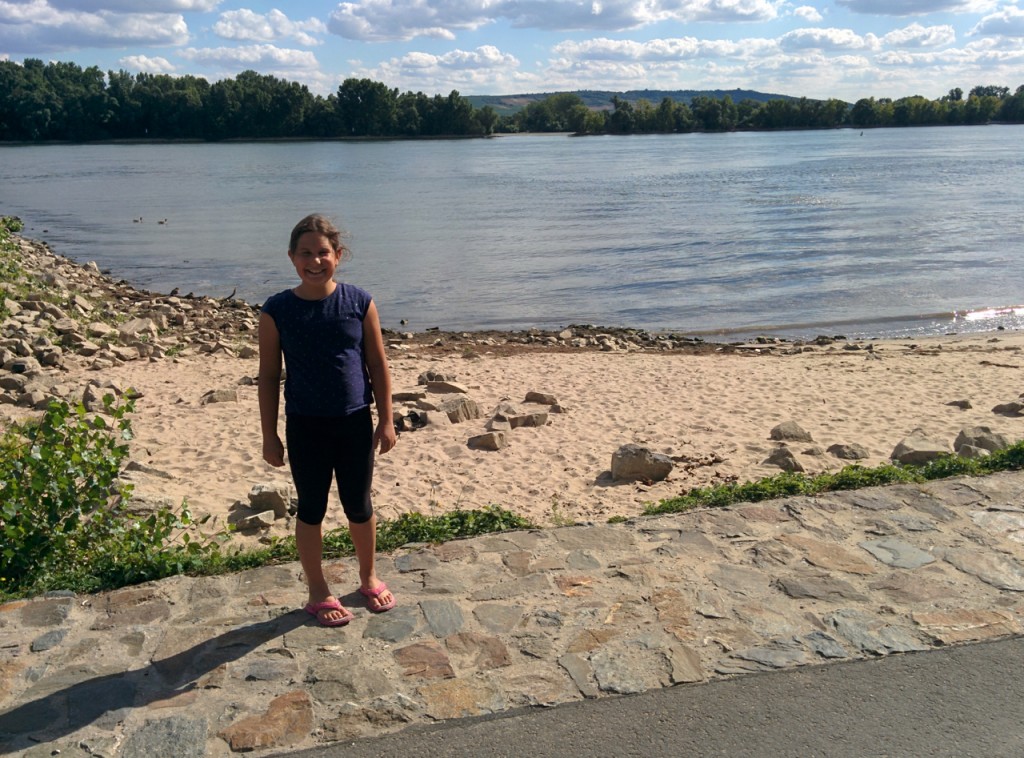 On the edge of Rudesheim, we set up camp at Rheingaucamping. We had a great location with just the bike path between our tent and the river. 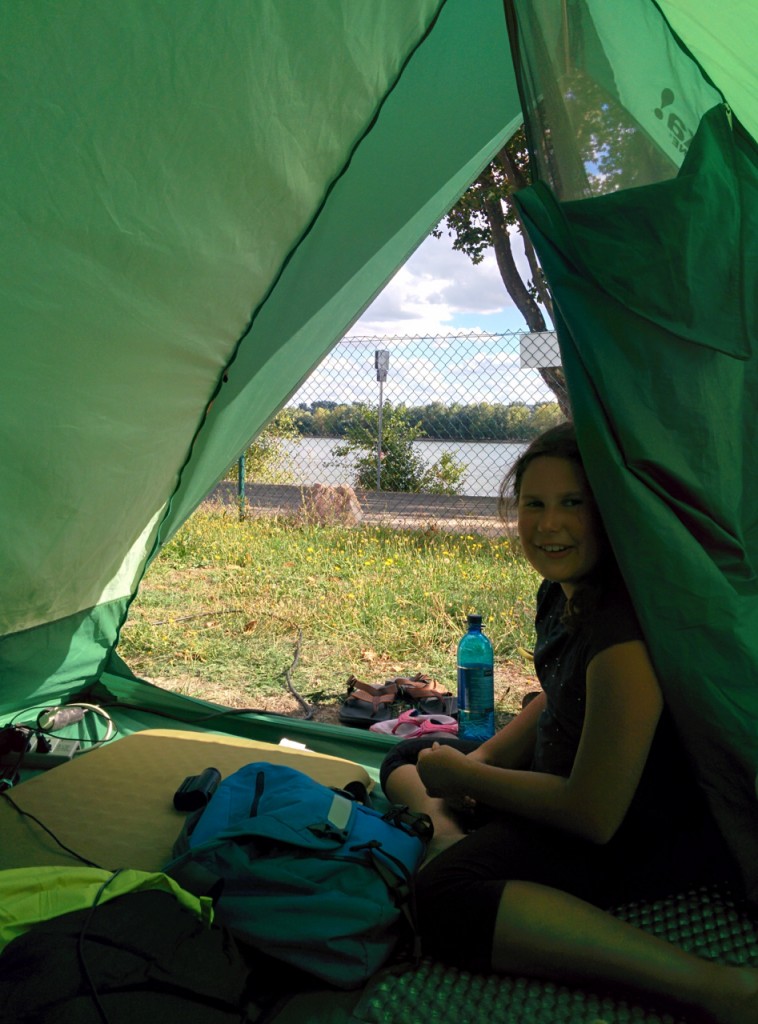 River views from our mansion

The folks at the campground were nice enough to loan us an RV hookup cable and outlet so we could have power in our tent to charge our batteries! The only thing missing was internet, but at least we could charge our cameras and phones. Nice.

We had a nice dinner at the Boosthaus Restaurant just down the path. 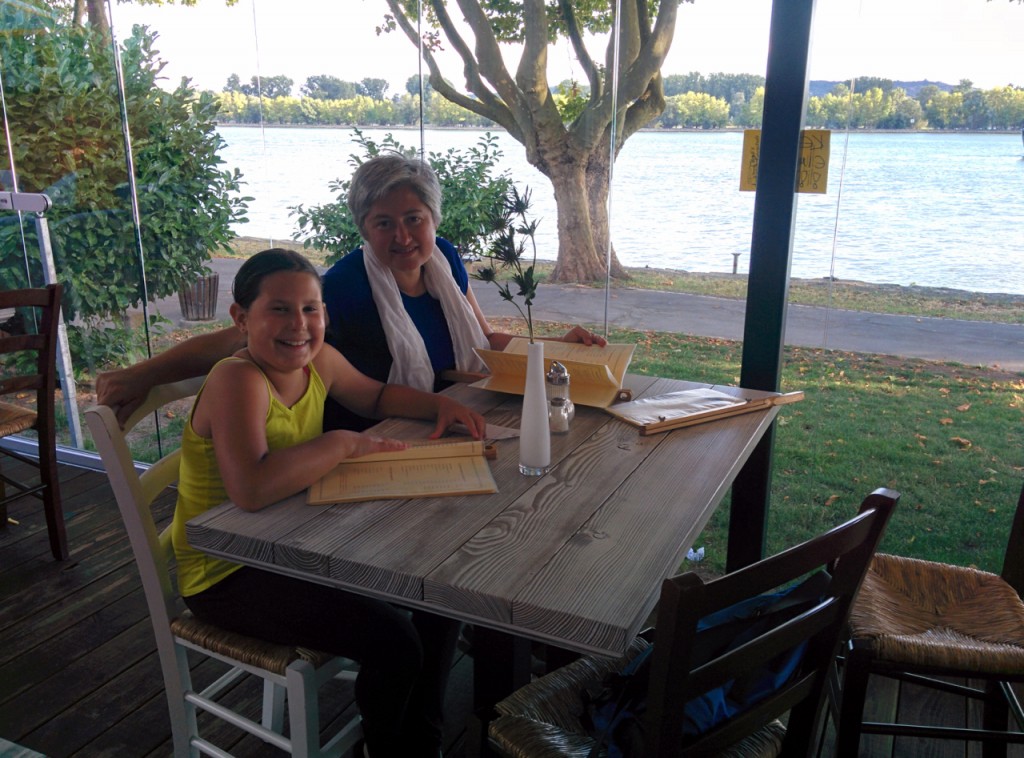 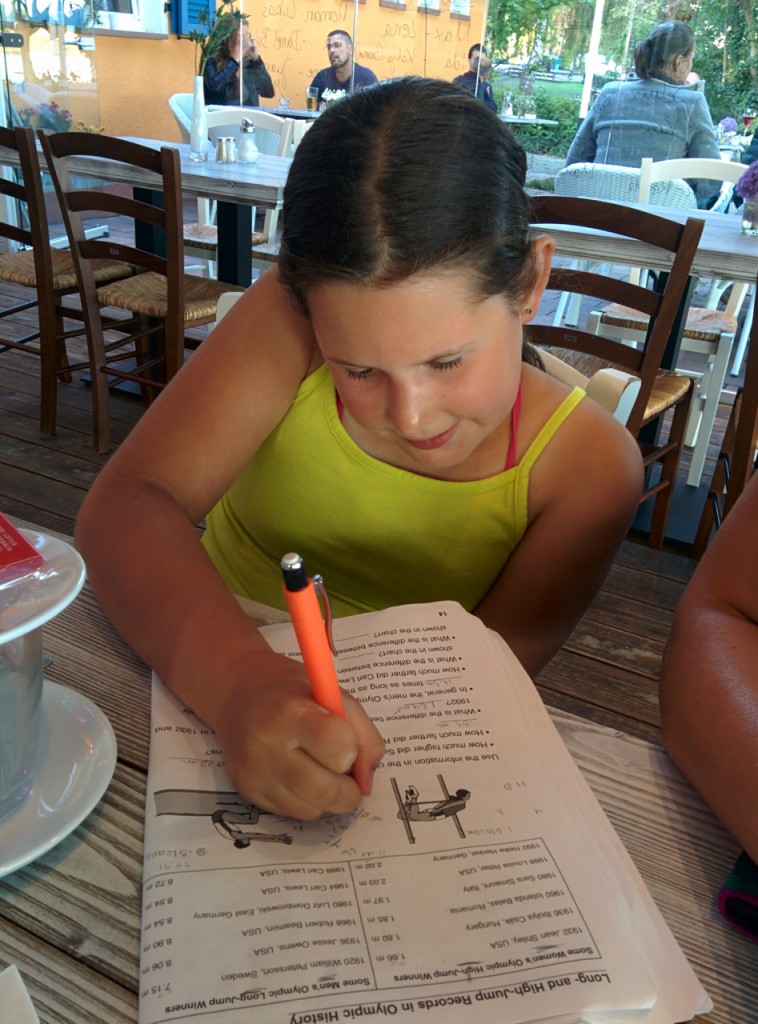 We watched the ships go by as the sun set on the Rhine. 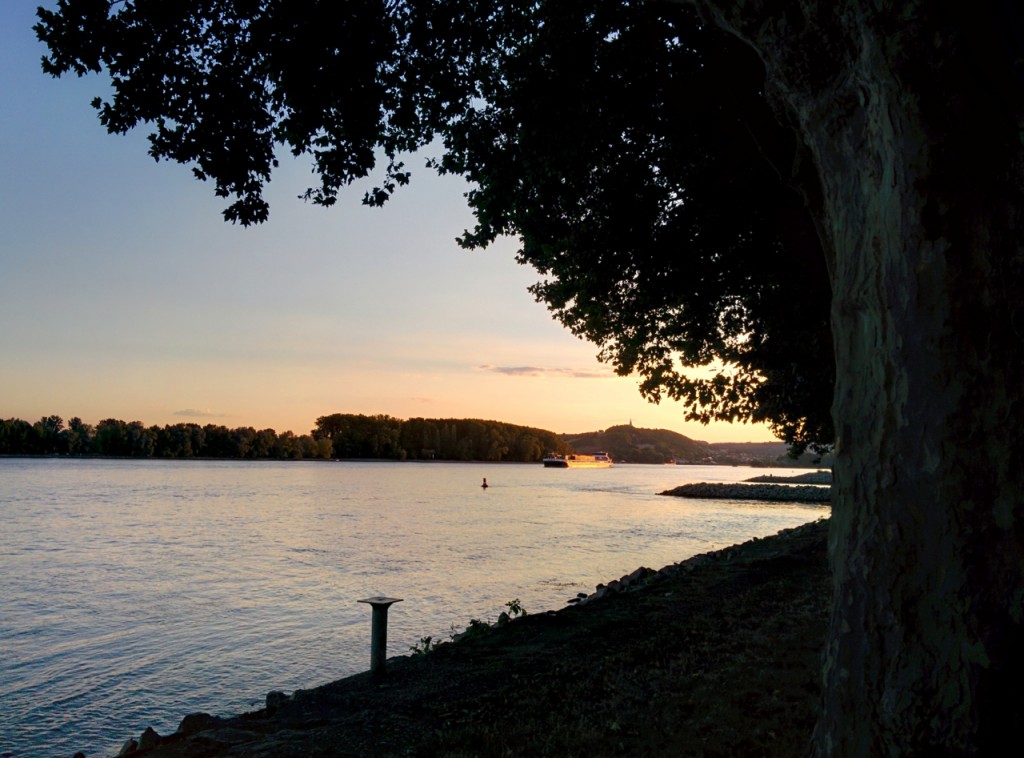 Mila was cozy in the new sleeping bag, and I used our two light sleeping bags together. Unless it gets really cold, I think we’ll all be cozy and warm now.