Today we rode 37.48 km from Rudesheim to Sankt Goar

We packed up camp and rode into Rudesheim proper. Rudesheim is siad to be the second most visited tourist destination in Germany, after the Cologne Cathedral. Smack in the middle of the wine country of the Middle Rhine, it is a cute little village, but very, very touristy. In fact, I don’t think there is much in town other than tourist-focused businesses. It’s cute little streets and alleyways are packed full of little cafes, trinket shops, wine bars, beer gardens, and B&Bs. A tourist ghetto, but a nice one. We poked around town and had a tea and some sweets while we waited for the next ferry across the river. 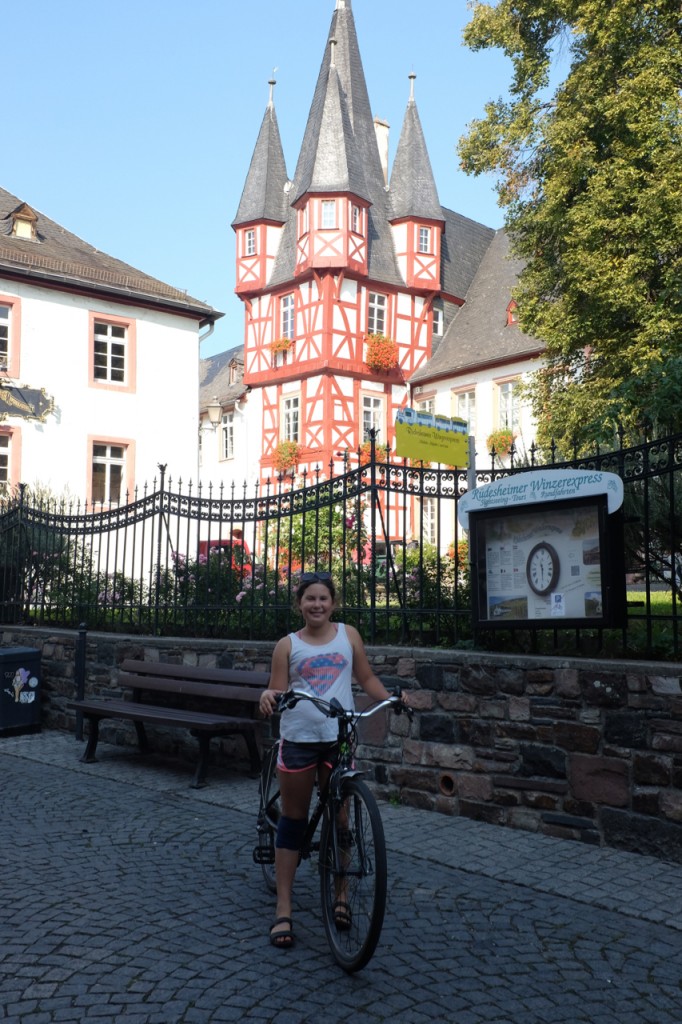 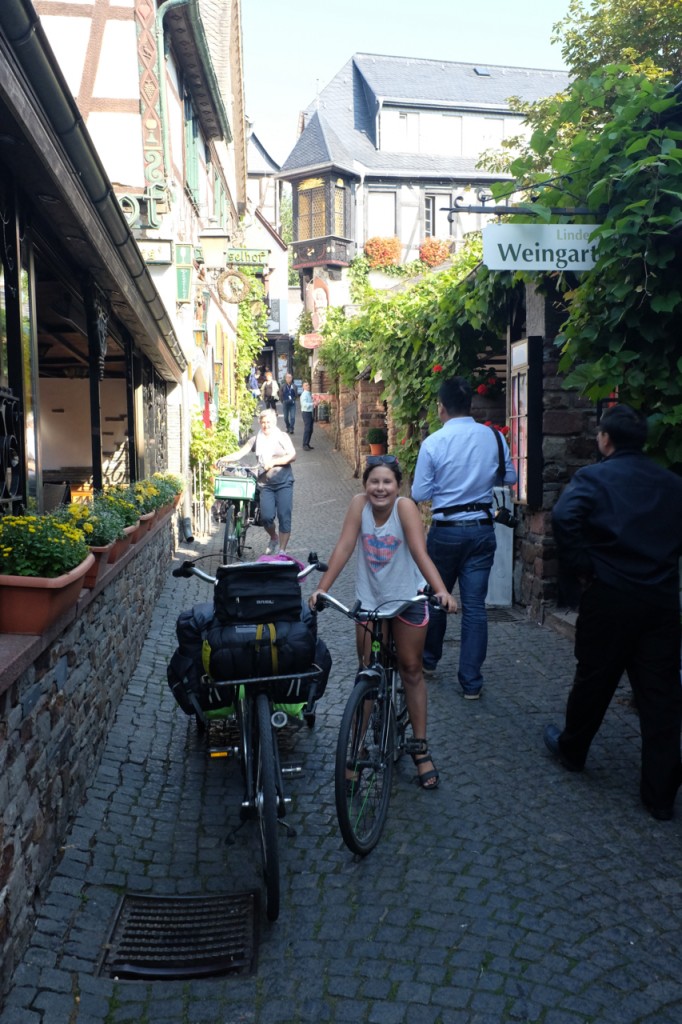 One of the many cute little alleys 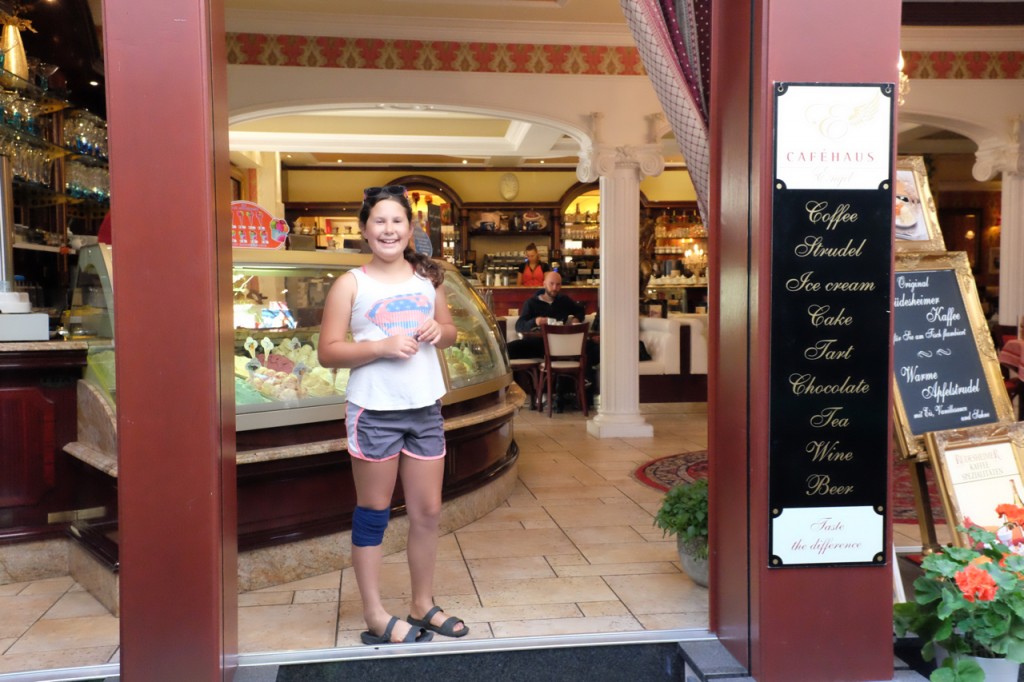 Jette in the cafe 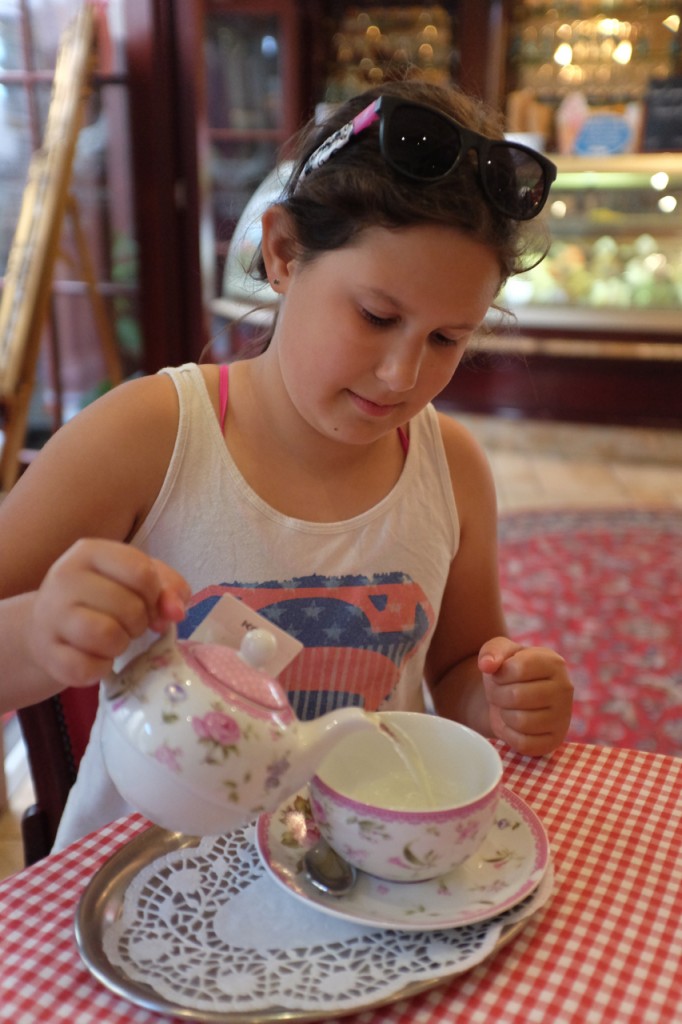 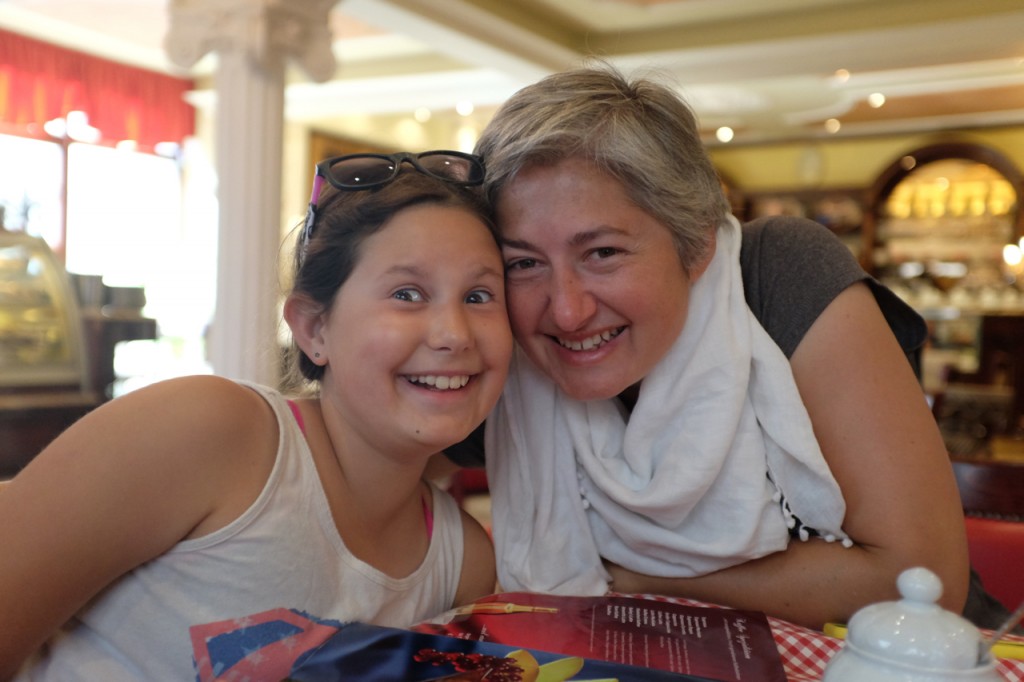 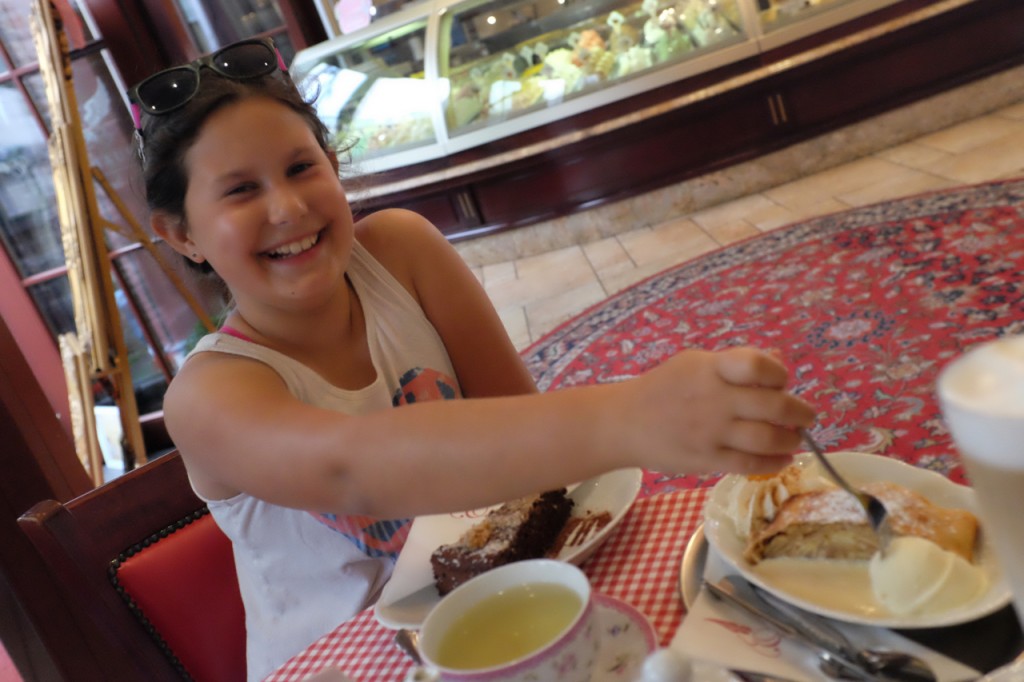 Stealing a bite of strudel 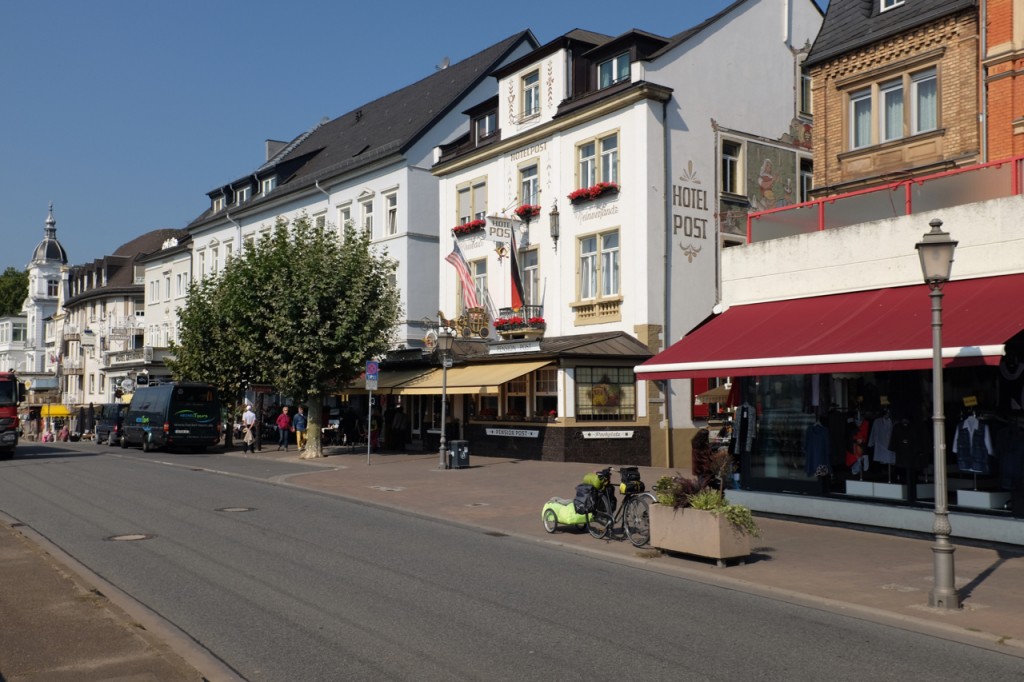 The main street along the river 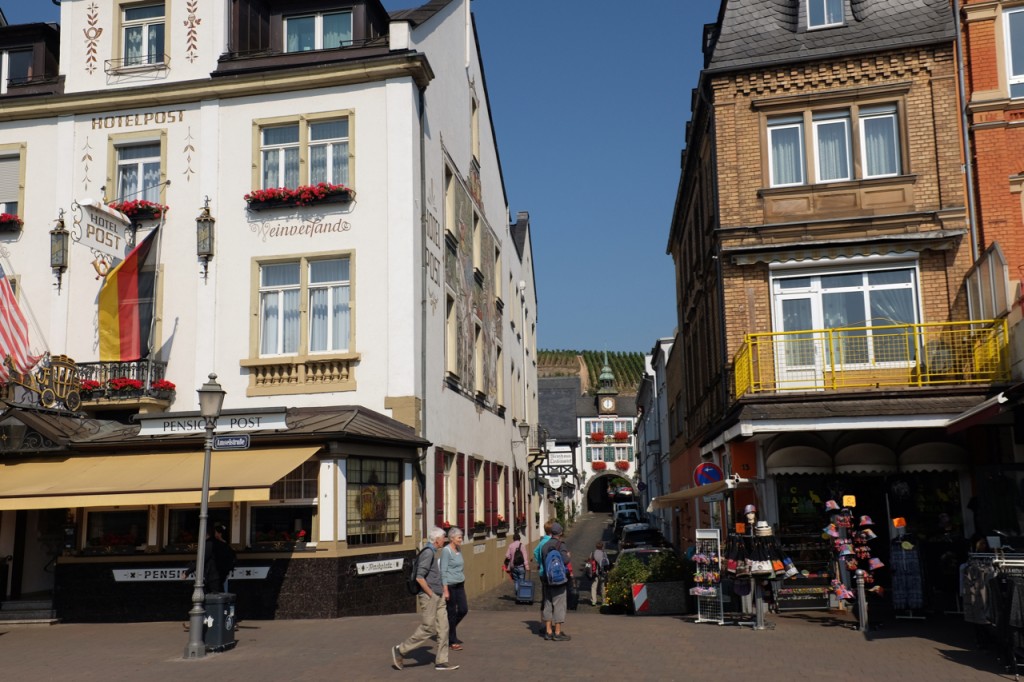 Looking back through the village to the vineyards in the hills

I happened to snap the following photo in Rudesheim, so I’ll go off on a quick “gear” tangent… Somewhere along the way someone stole my handlebar bag. Or maybe we left it in the hotel in Strasburg. We’re not sure. All we know is it went missing (it was empty at the time). Anyway, I bought a cheap 20 Euro bag at a bike shop near Mainz. Here’s a shot of the front of my bike with the new handlebar bag and Mila’s new sleeping bag which now lives on my front rack. 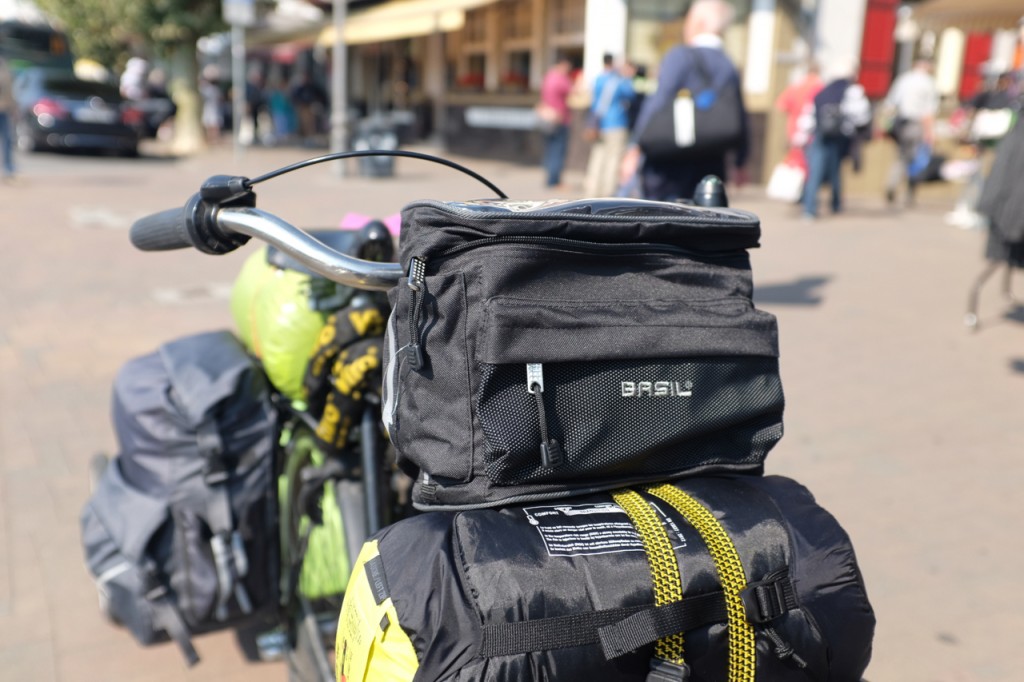 The new bag is much bigger. All I had in the old bag was my camera, so this one allows me to stash a few other things in there too, and provides easier access to the camera, which is nice.

So. We hopped on the ferry and headed across the river to Bingen, where we picked up the route along the West shore of the river. 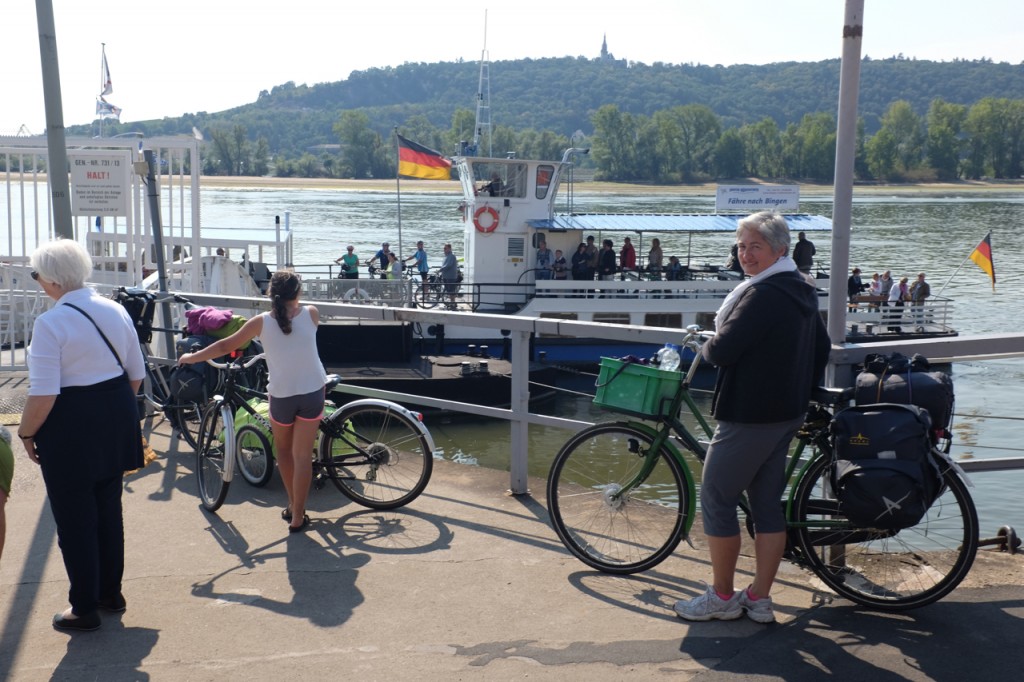 Waiting for the ferry to Bingen 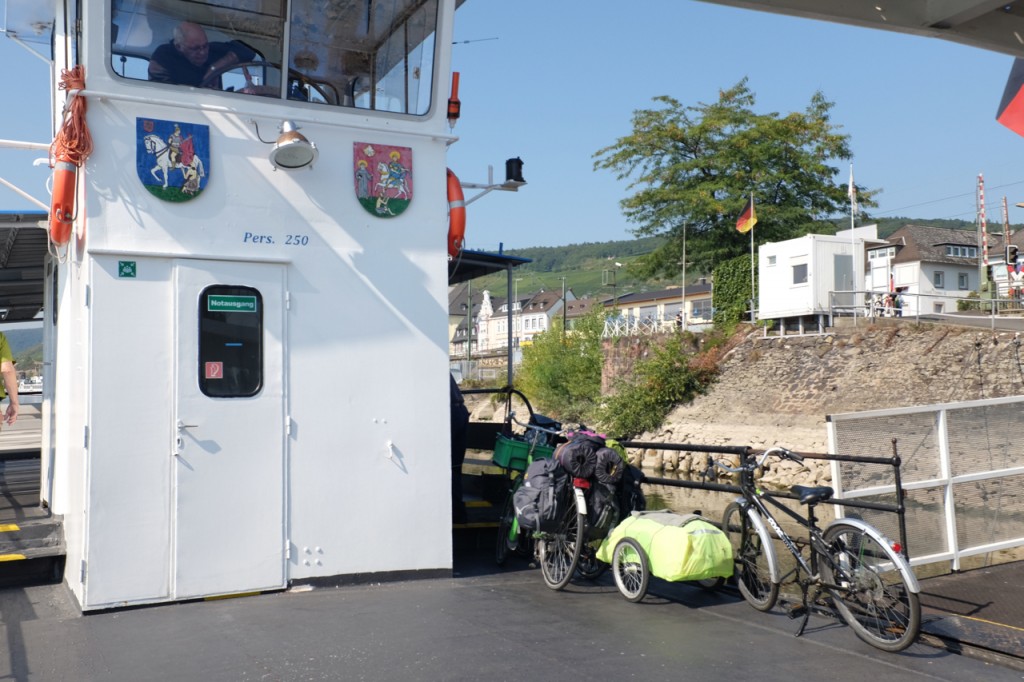 Bikes on the ferry 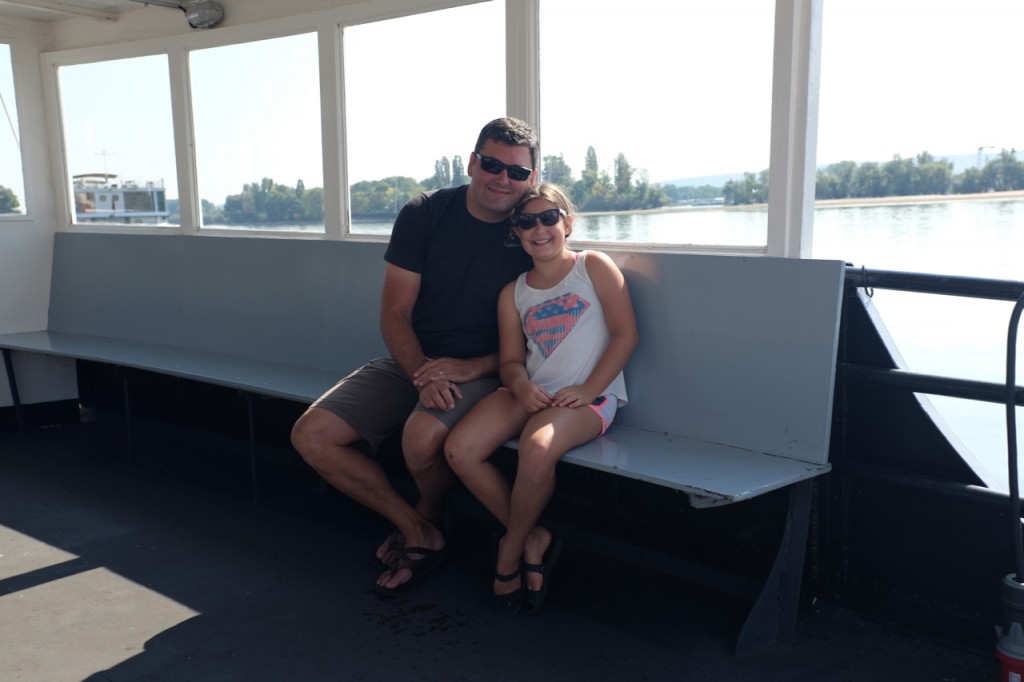 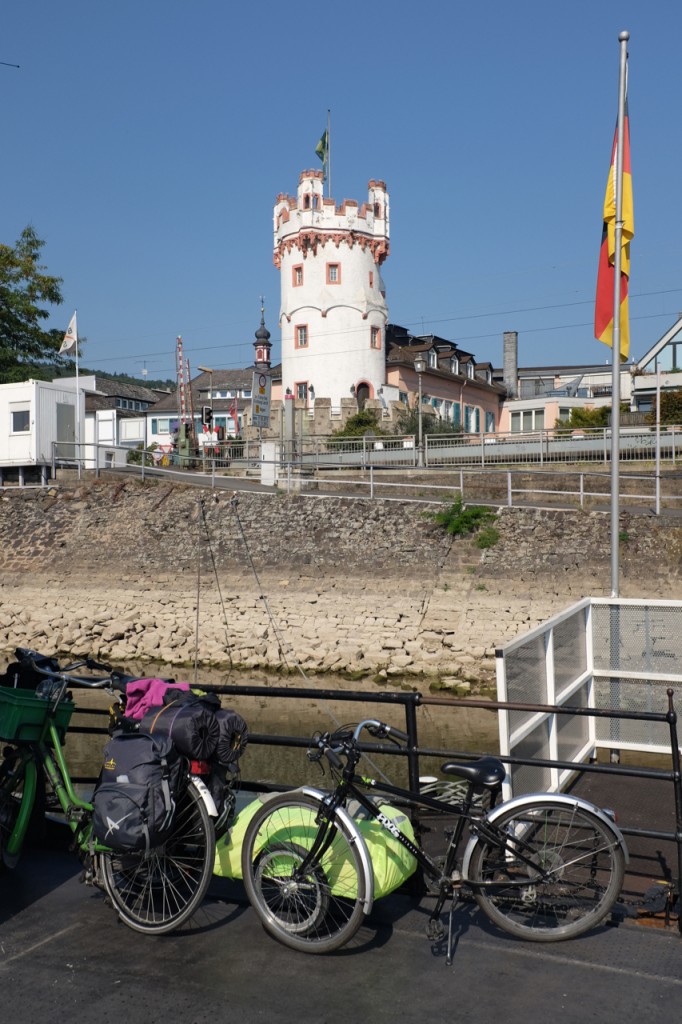 Looking back at Rudesheim from the Ferry

We landed in Bingen, which had a great view of the terraced vineyards across the river. The hand-built stone retaining walls were pretty amazing. They have certainly mastered the art of hillside farming. 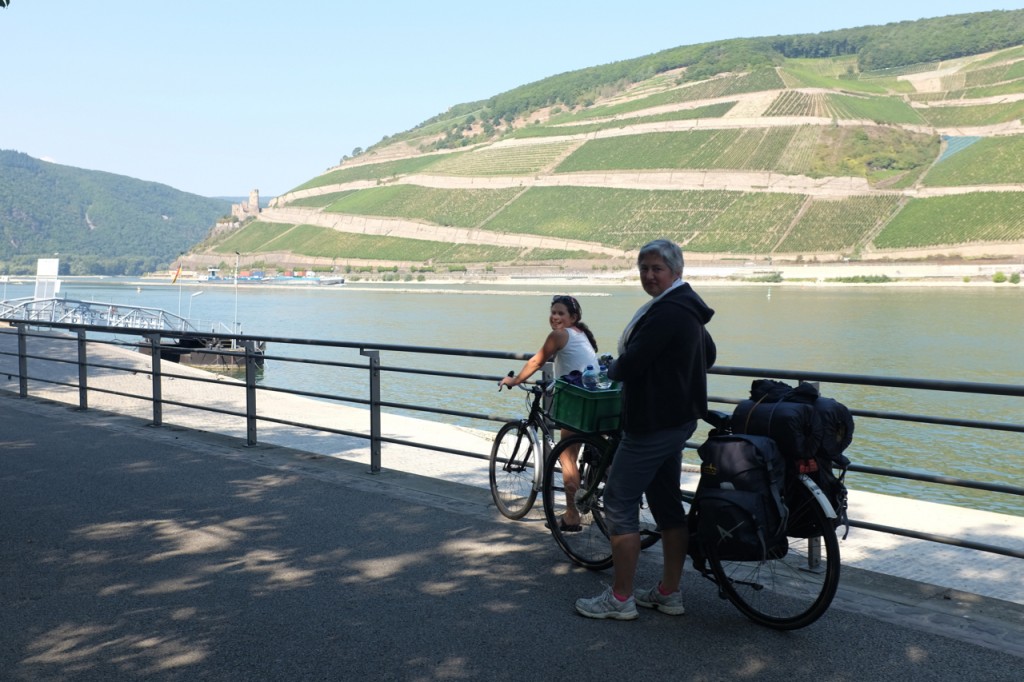 The view of terraced vineyards from Bingen 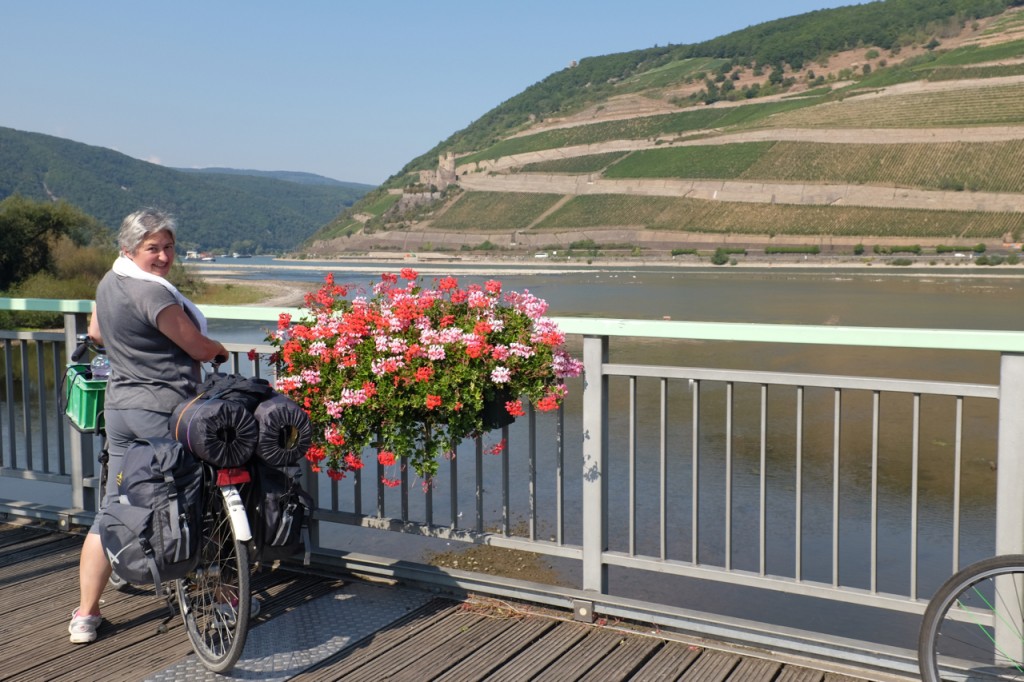 We rolled into town and found the main shopping street where we stopped into the mobile phone shop to buy more credits for our prepaid SIM card. We use Google Maps on my phone for navigation and for searching for campgrounds and other things that we might need along the way. 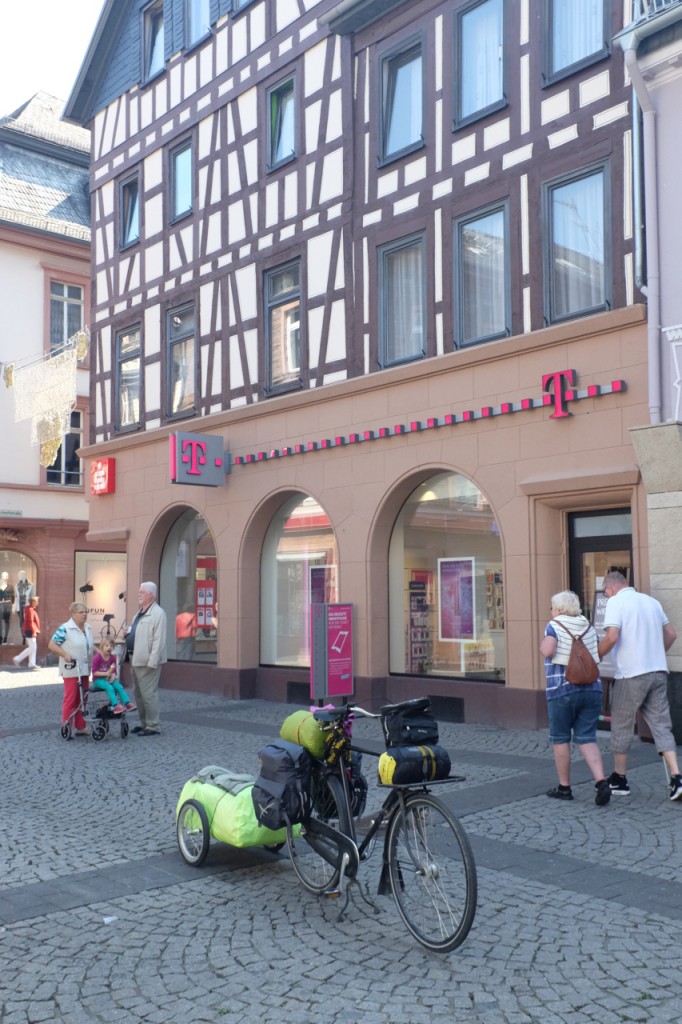 Credits “topped up” we found the path and hit the road. The path followed the bank of the river and we had nice views of the passing ships as well as the terraced hillsides and little villages along the opposite bank. Along the way we passed more jetties with little sandy “beaches.”  We stopped for a beach break. 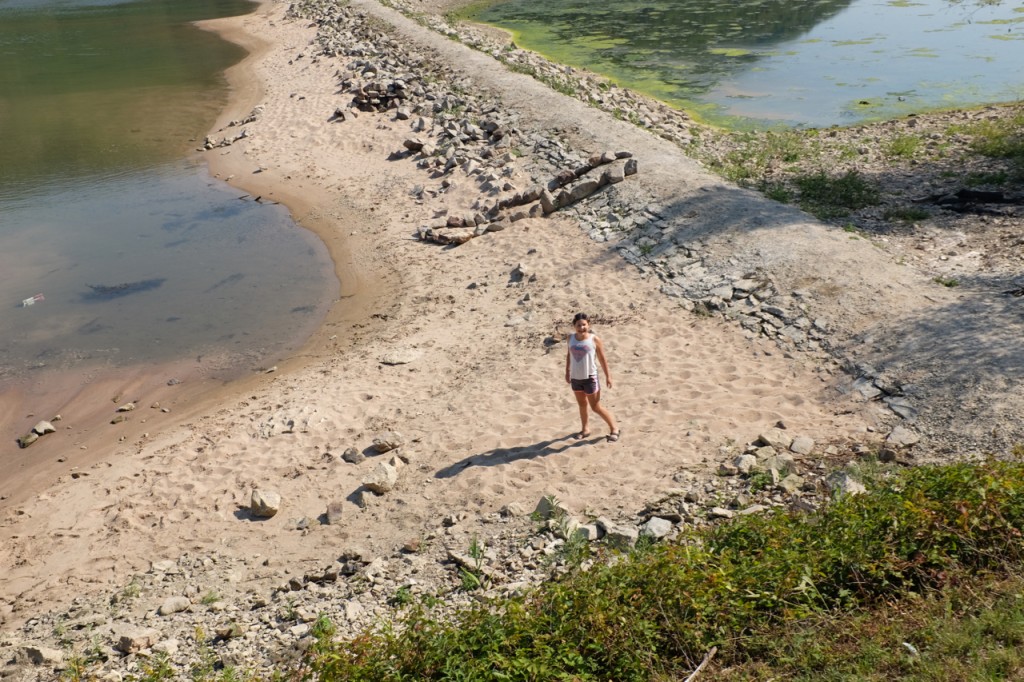 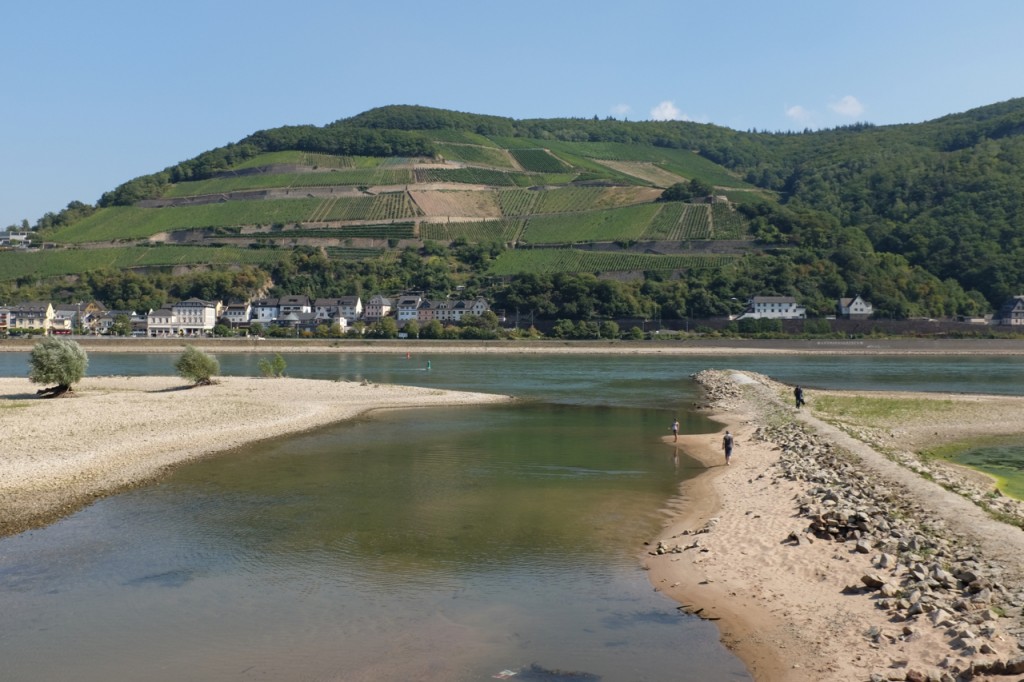 Jette and Mila on the jetty beach

While we were stopped an older man on a bike stopped and told us that he had a boat and that the water levels were really low in the river. That was something that we had been noticing for a couple of days. From the look of the water lines on the shore, the vegetation and even the floating docks, it looked like the water level was as much as 2 or 2.5 meters lower than “normal.” 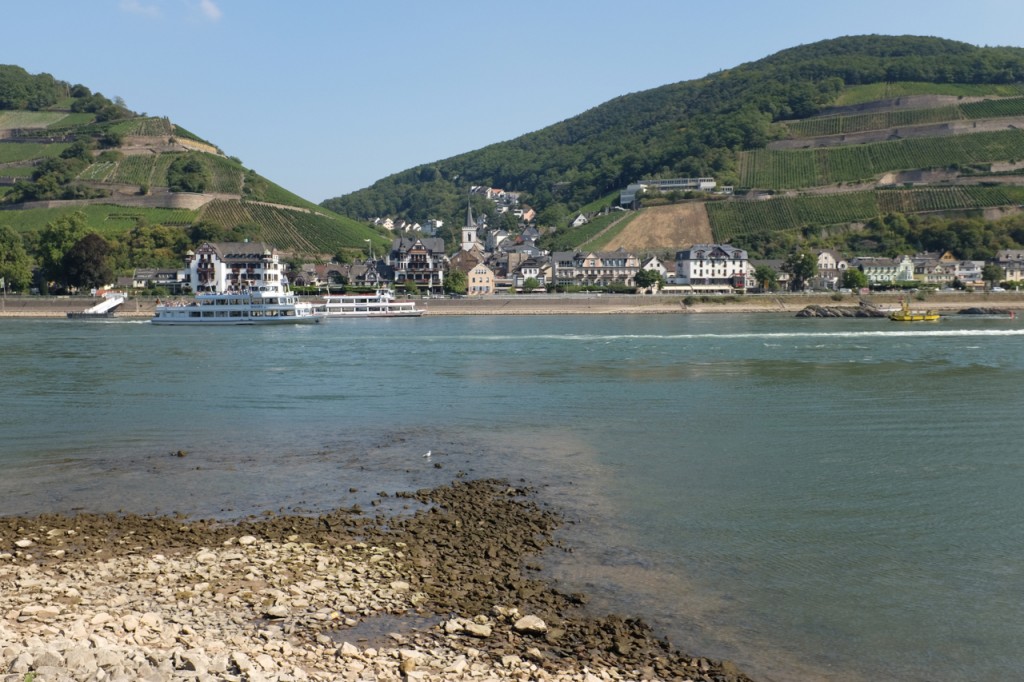 Little village tucked in the valley 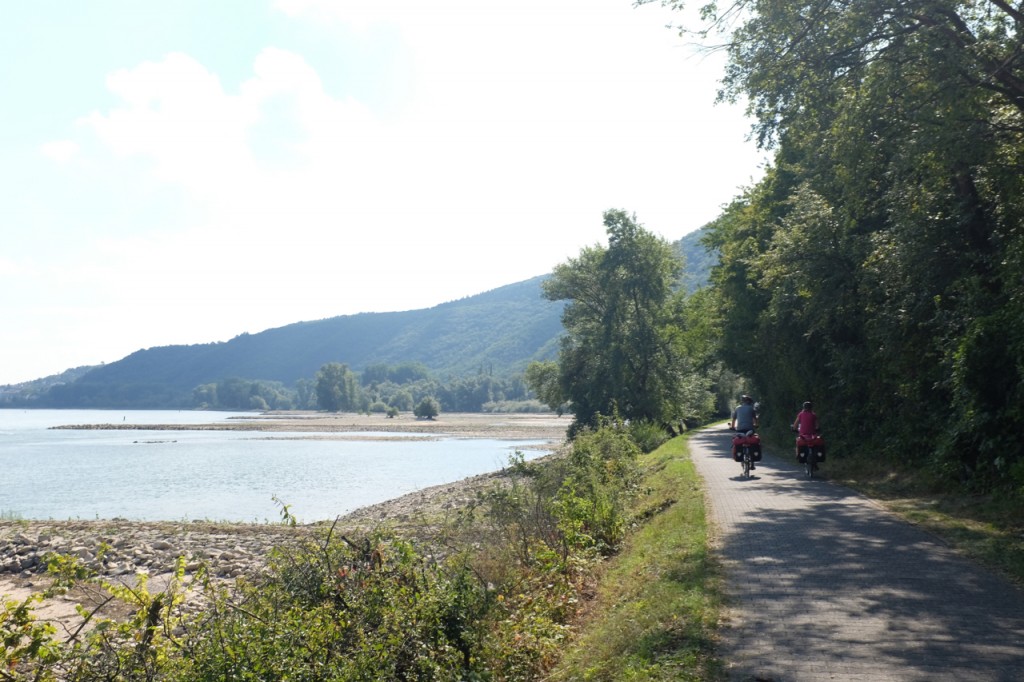 The trail along the river

Oh, did I mention there were castles? Along this section of the Middle Rhine there are many castles and it has been designated a UNESCO World Heritage Site. Along with all of the cargo ships, we’ve started to see lots of big river cruise ships too. 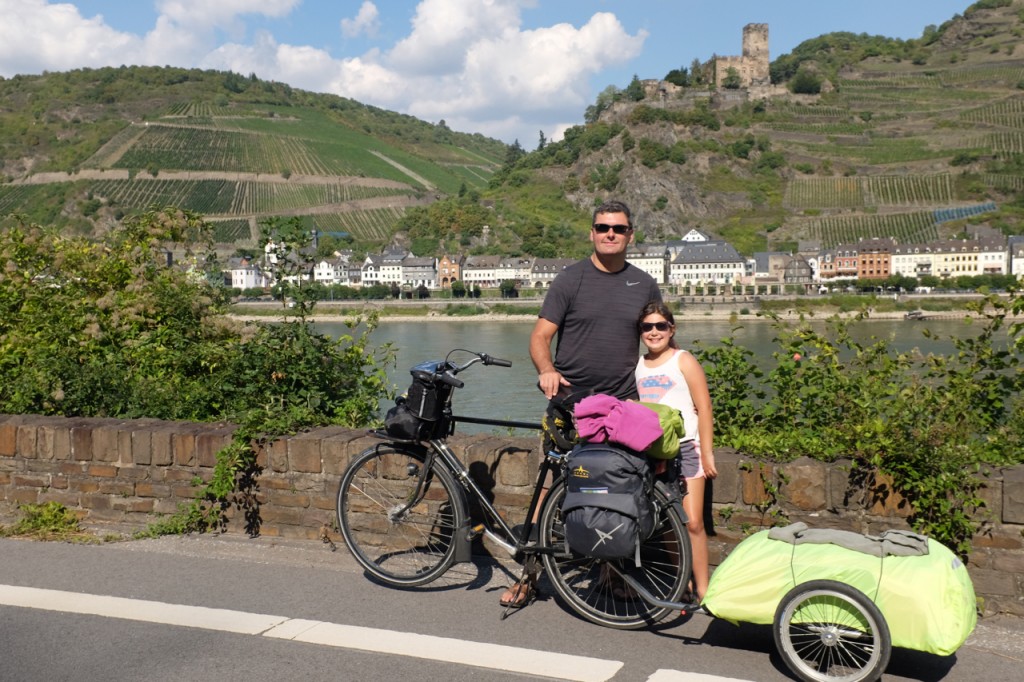 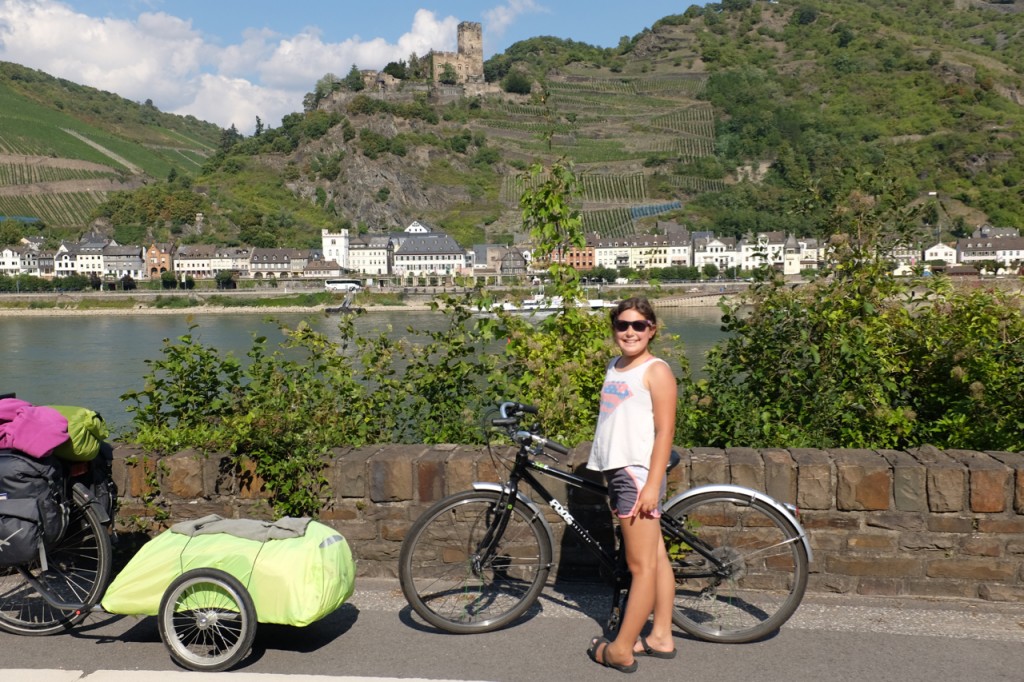 Jette on the Middle Rhine with castle

In many of the towns and villages we’ve passed through, they are getting ready for Octoberfest with town squares, main streets and river fronts morphing into soon-to-be-open biergartens! 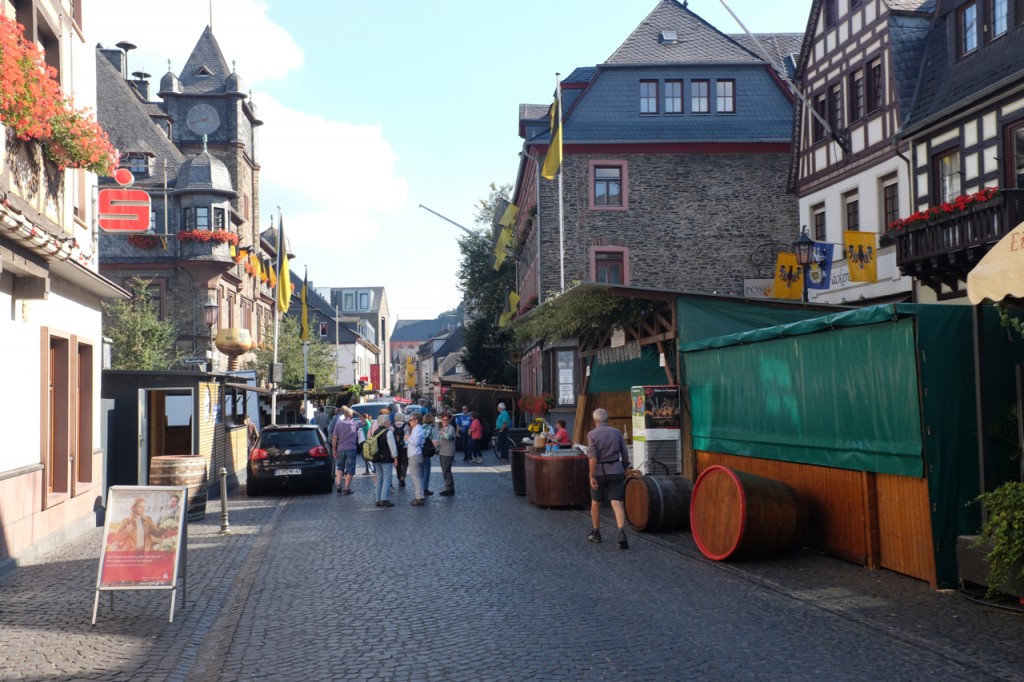 Getting ready for Octoberfest

As we got closer to Lorelei and St. Goar the trail hugged the edge of the river and was often high up above the river. Immediately to our left was the two lane highway, so it was noisy with passing vehicles. When the big river cruise ships passed we rang our bicycle bells and waved, trying to get the all the old people (there seemed to be nothing but grey hair!) on the boats to wave back. Some of them did.

Do you remember the story of the Rhine Maidens? We told you about them when we were in Disentis, Switzerland. Well, this section of the Rhine has The Lorelei. 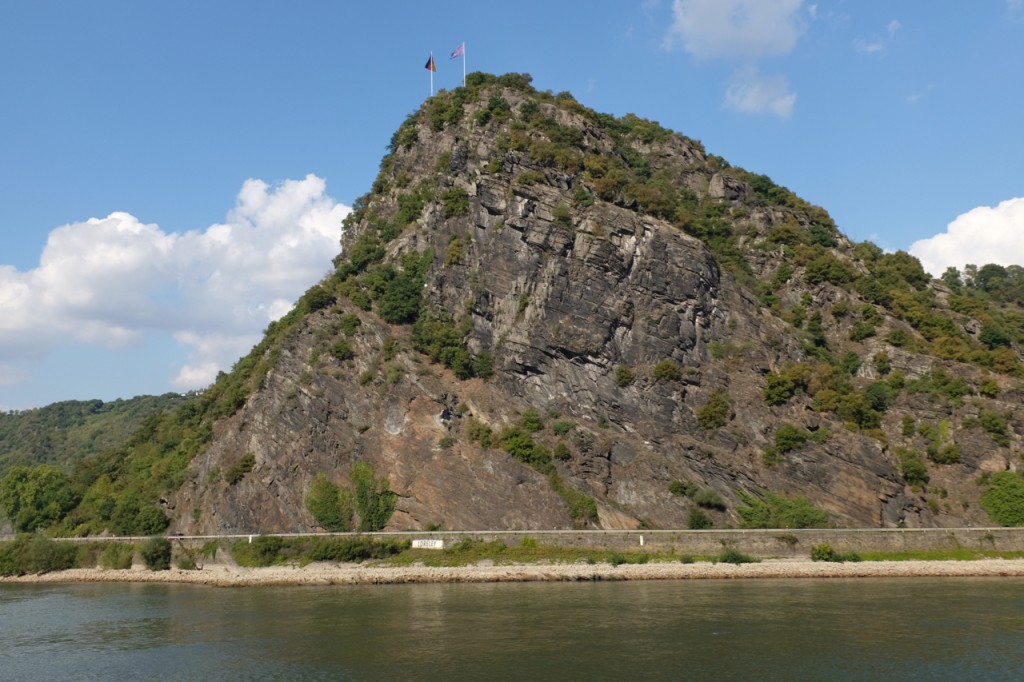 Here’s how Wikipedia describes the Lorelei:

The Lorelei is a rock on the eastern bank of the Rhine near St. Goarshausen, Germany, which soars some 120 metres above the waterline. It marks the narrowest part of the river between Switzerland and the North Sea, and is the most famous feature of the Rhine Gorge… A very strong current and rocks below the waterline have caused many boat accidents there.

Lorelei is also the name of a feminine water spirit, similar to mermaids or Rhinemaidens, associated with this rock in popular folklore and in works of music, art and literature.

There are a number of stories and myths about the Lorelei – from a beautiful siren who lures men to their deaths to dwarfs living in caves on the cliff. We didn’t see either, but we did stop for the night and set up camp in a beautiful spot on the bank right across the river. 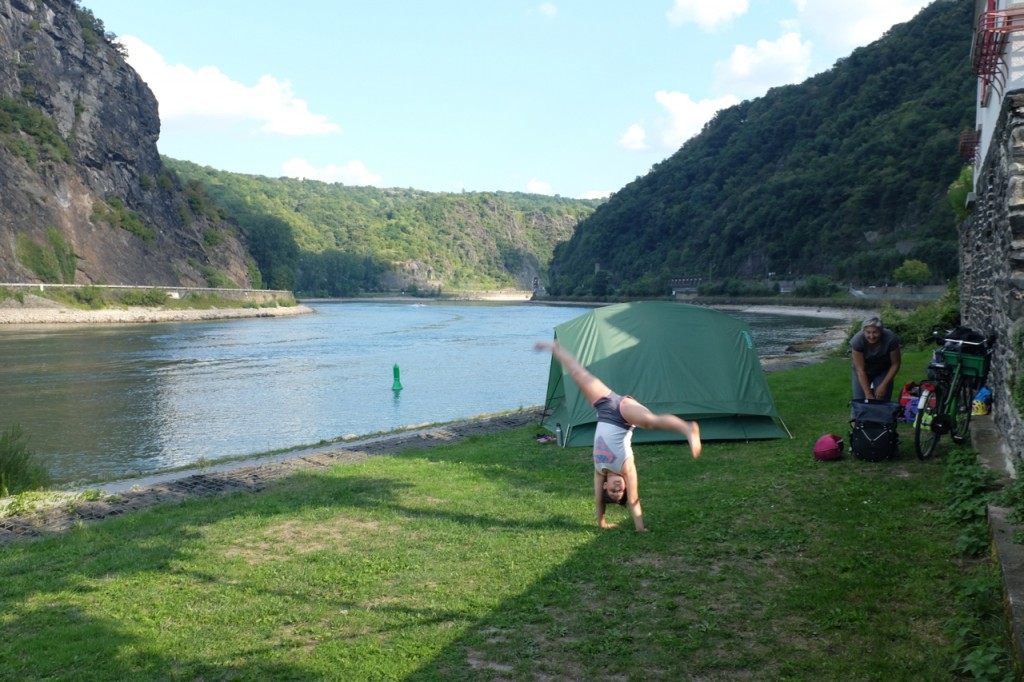 Our tent and the Lorelei

Our camp was right next to a house and Jette had a fun time climbing the stone walls. At a couple points a girl about Jette’s age walked by, checking us out. The second time she came by I said hello and told her our names. She said her name was Sophia. I asked if she lived in the house. She said yes and with a shy smile she was gone again. We didn’t see her again but in the morning we left her a note thanking her for letting us camp next to her house and giving her Jette’s email address and asking if she wanted to be pen pals. 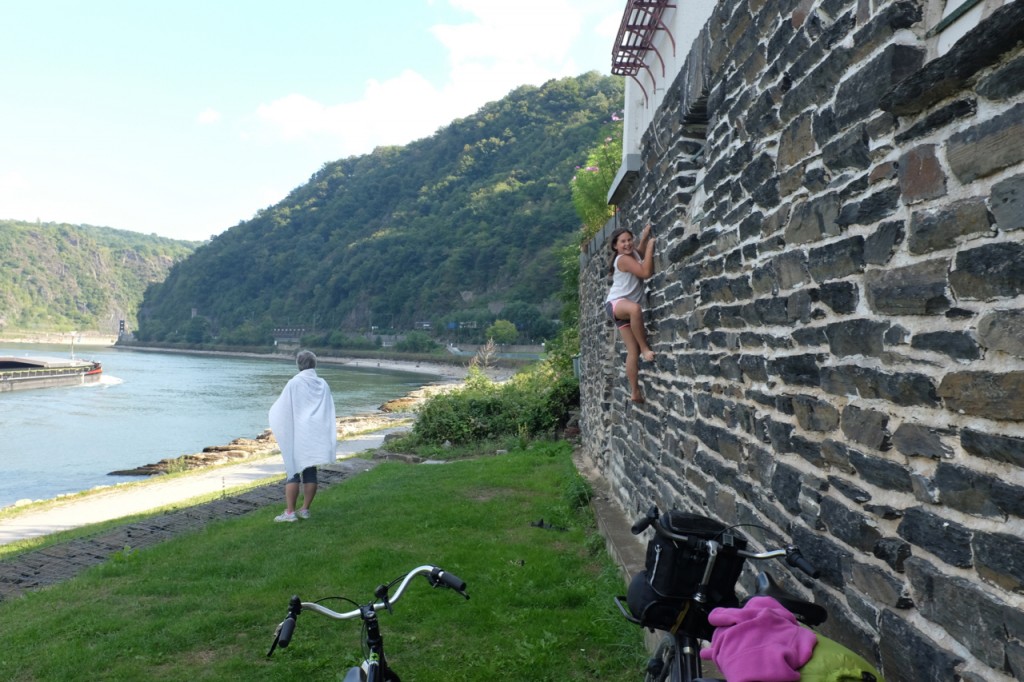 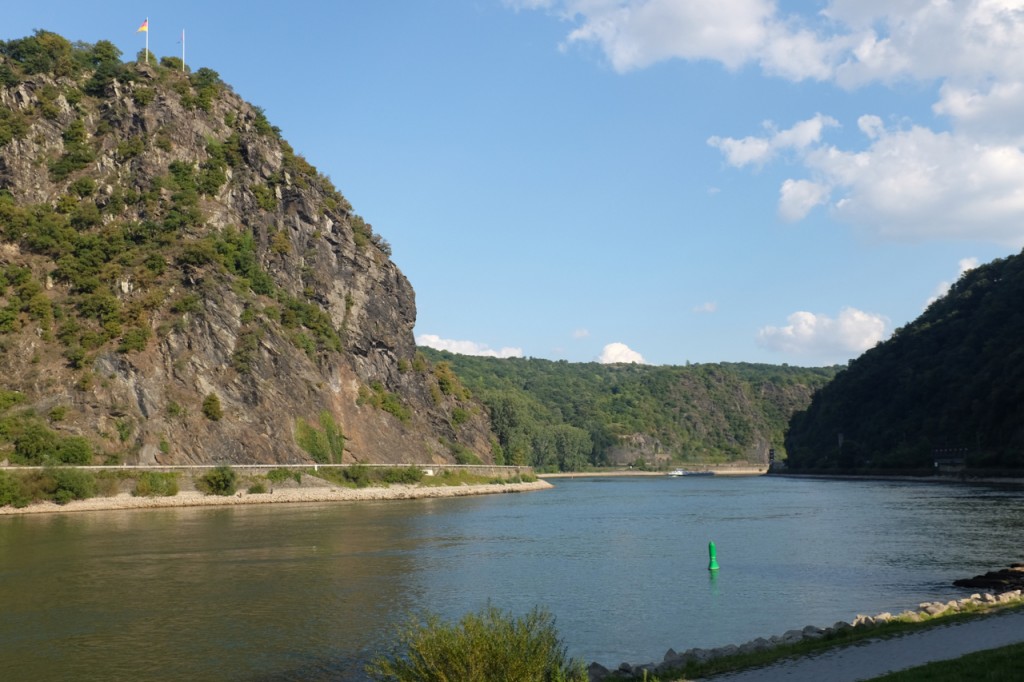 View from our tent

We had dinner at on the patio of a nearby restaurant. Jette had some fun on their trampoline. 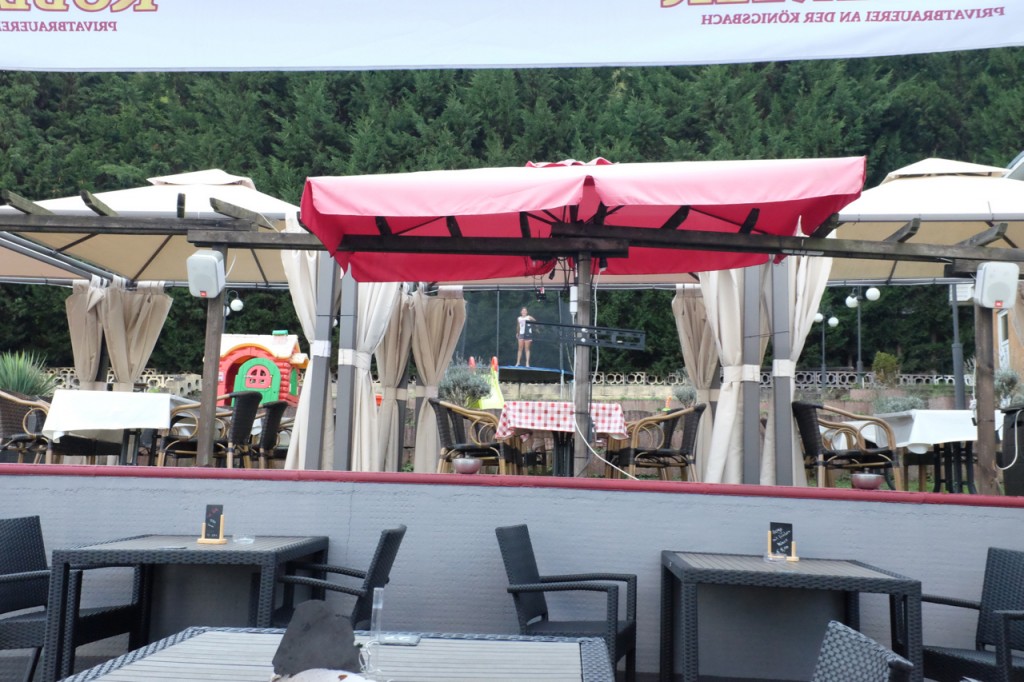 I enjoyed what has become a typical dinner for me in this part of Germany – a green salad and a margherita pizza. Yum!

After dinner we hit the sack and slept to the sound of many, many boats and ships passing the Lorelei in the darkness.