Today we rode 41.83 km from Sankt Goar to Koblenz. 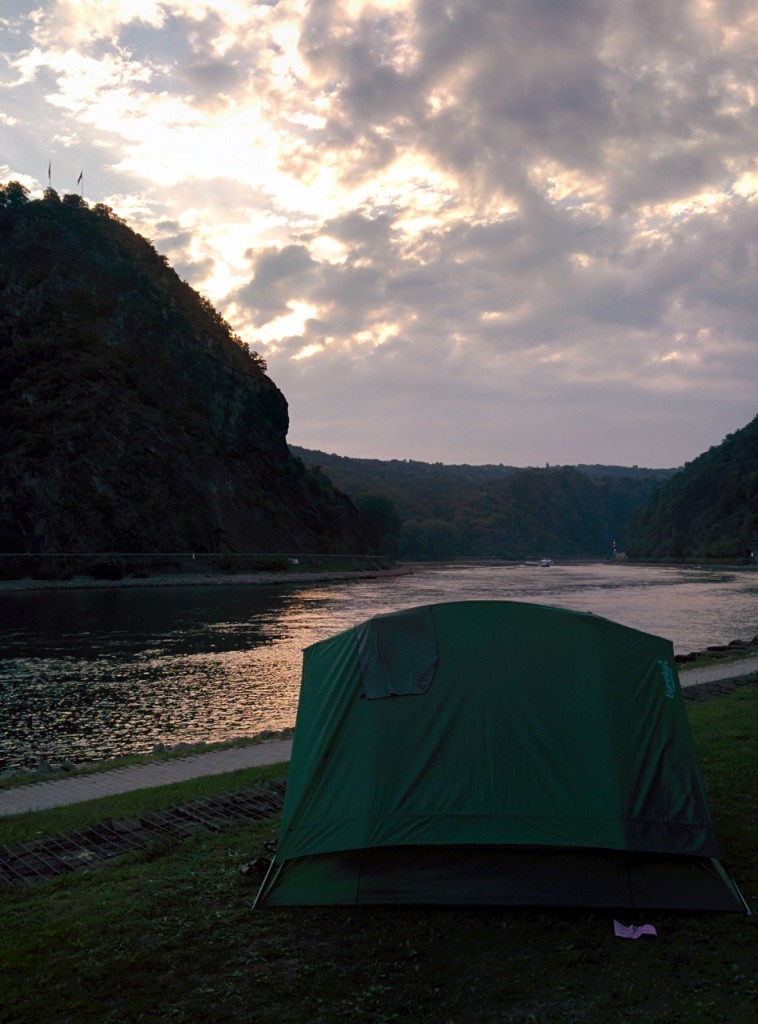 This morning we packed up camp and I decided to do some quick bike maintenance. The trailer arm had bumped my rear wheel and knocked it out of alignment a couple days ago and I had been procrastinating fixing it. So, we ate some bread and butter, packed up camp, brushed our teeth and I broke out the bike tools. Five minutes later the wheel was aligned, but there was a problem. 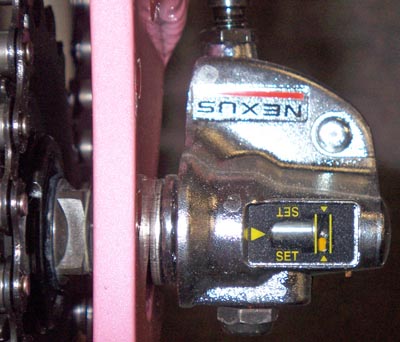 I have seen this happen before from the anchor bolt being over-tightened. The body of the bell crank is cast from a soft metal and if the bolt is tightened too much, the threads in the bell crank body disintegrate. Some years ago I did this on another bike and have been very careful ever since. It’s possible that I am to blame once again, but I’d like to think it was either the guy who swapped cogs on the bike in Amsterdam or the one who replaced the spoke in Switzerland. Regardless, I was stuck now. I had two wrenches, a multi-tool, and no spare parts.

Clearly it was MacGyver time…

I went into the little shop at the campground to see what I could find to improvise. They didn’t have much. In terms of hardware it was mostly spare parts for campers and RVs. Lightbulbs, hoses, fuses, and things of that sort. A little package of hose clamps caught my eye, and I picked up a roll of duct tape for insurance. 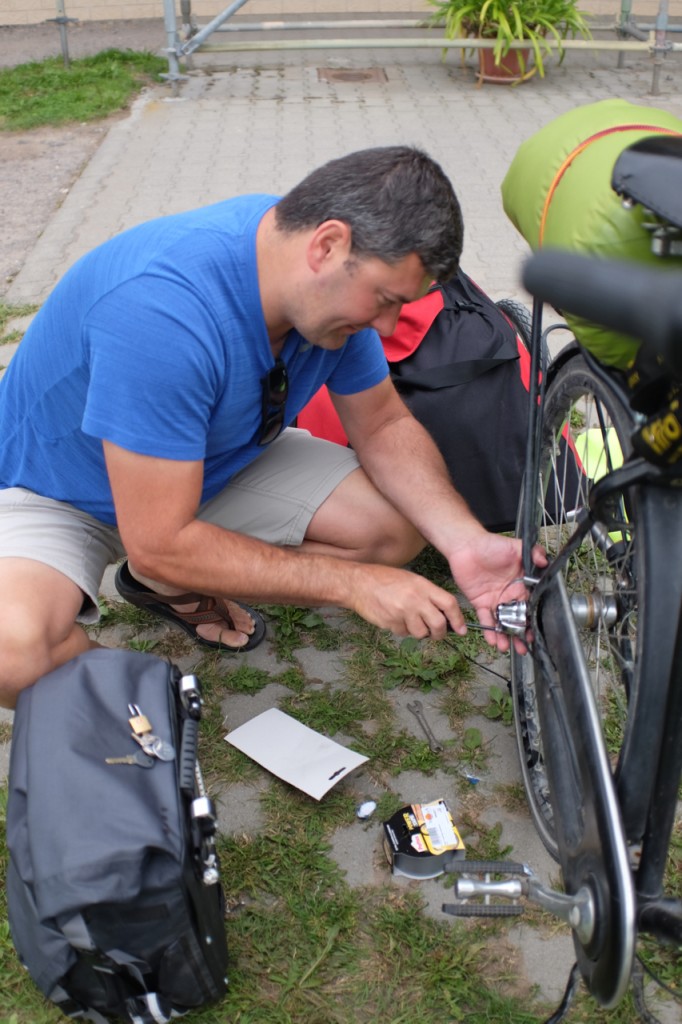 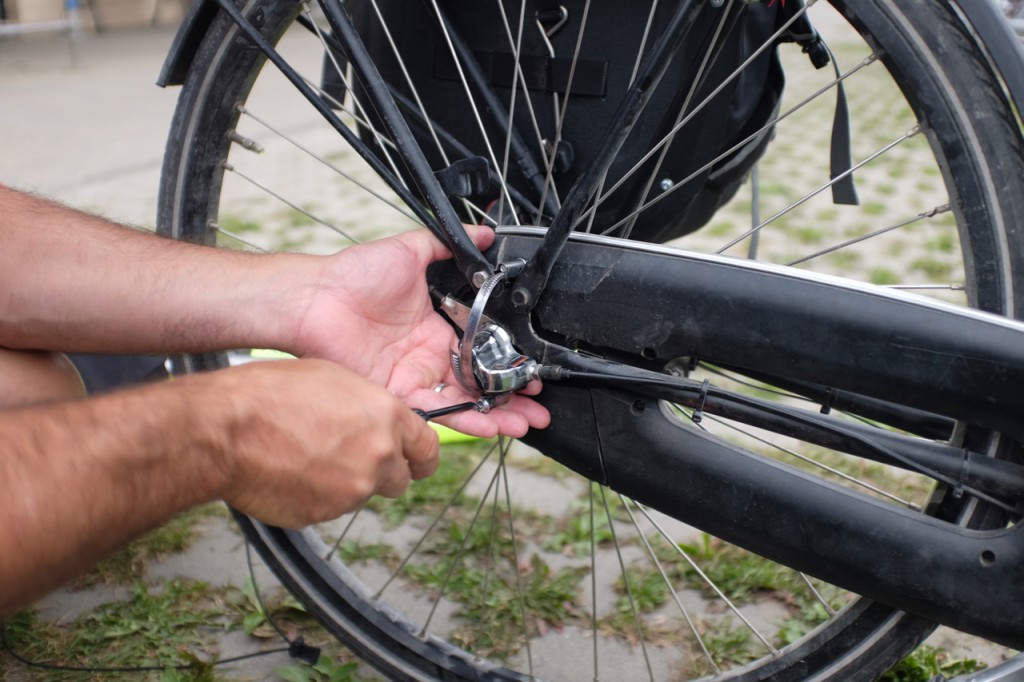 Hose clamps to the rescue

I joined two hose clamps to each other to get the length I needed, then wrapped the hose clamps around the dropout of the frame and the body of the bellcrank. I snugged them up and the bellcrank was held nicely in place. I was ready to roll! 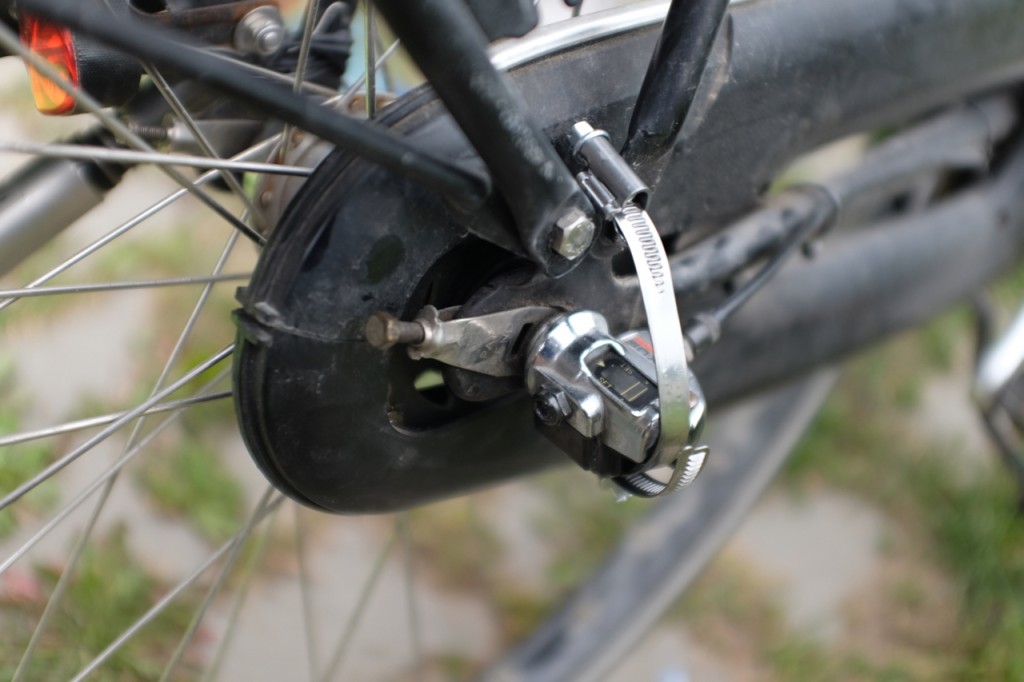 As good as new

Off we went, past castles and cruise ships. 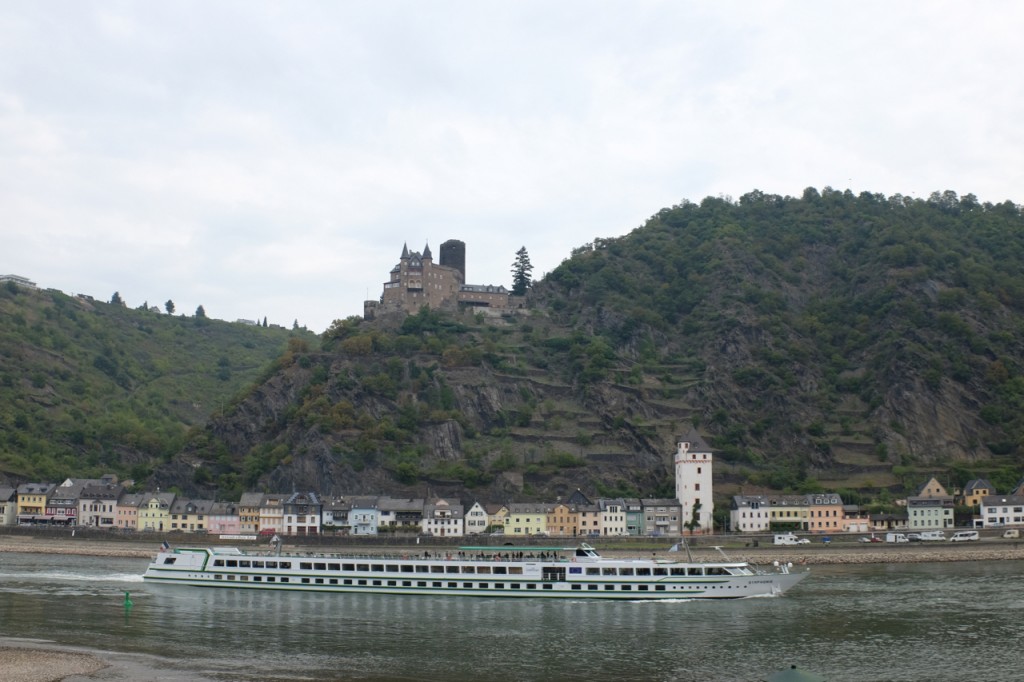 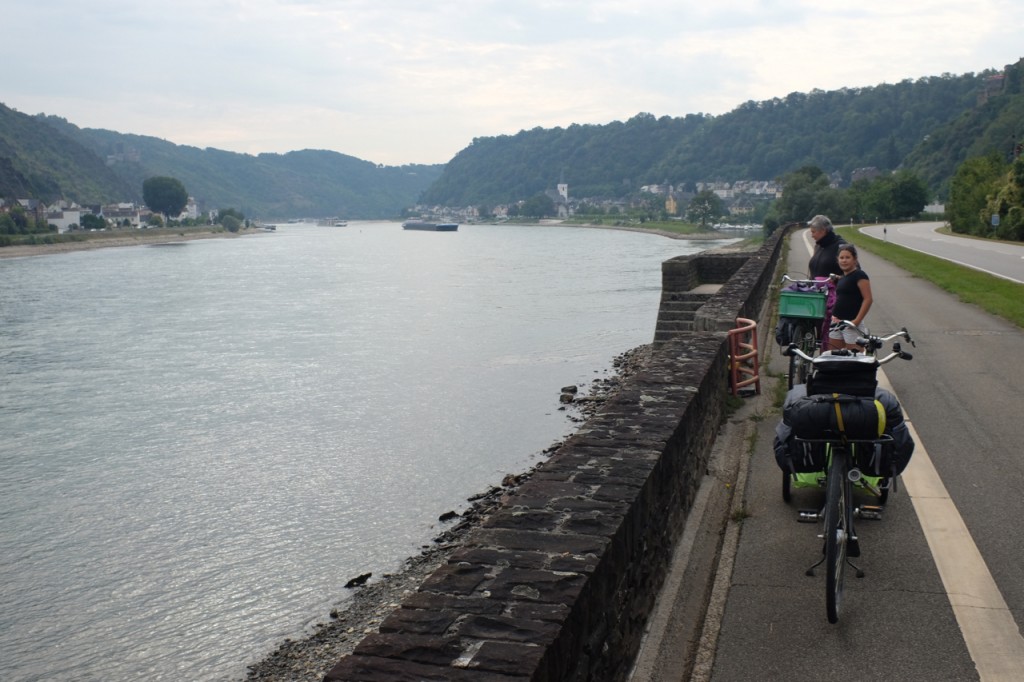 We stopped for lunch in very touristy Boppard. I think we hit town just as the river cruise ships dumped their human cargo for lunch too. We had some yummy omelets and it began to rain. We were tucked safely under the umbrellas and of course our panniers (bike bags) are waterproof. 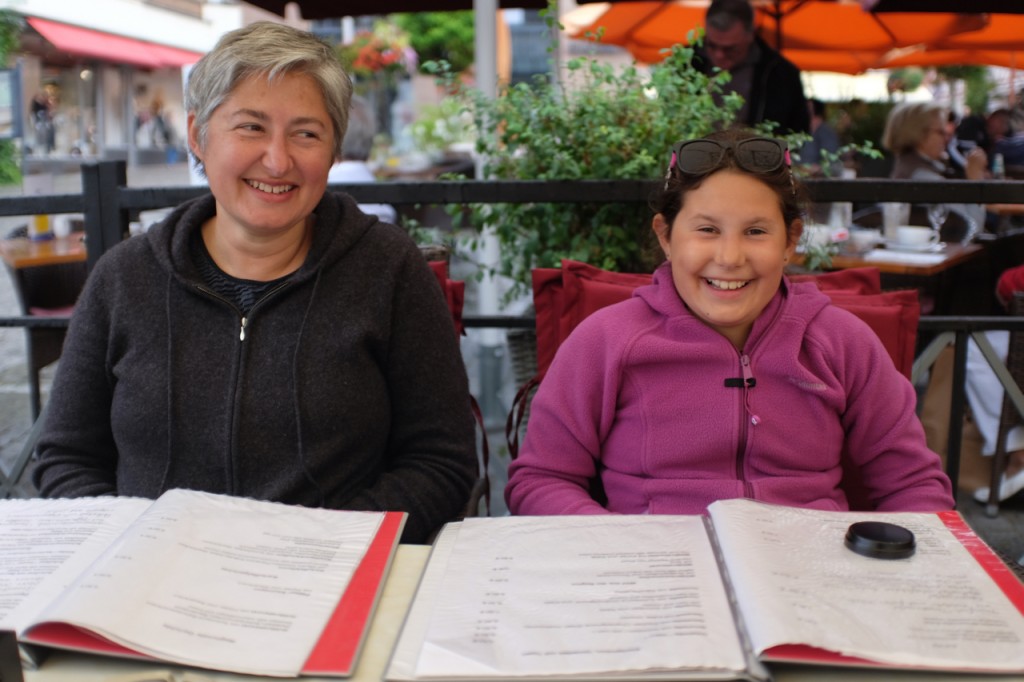 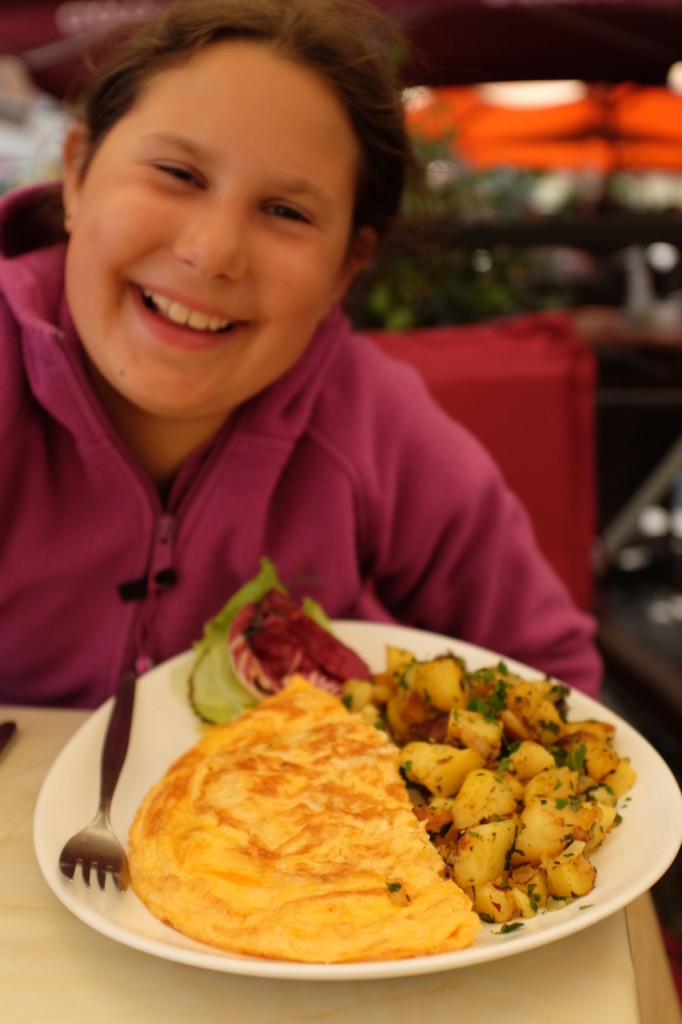 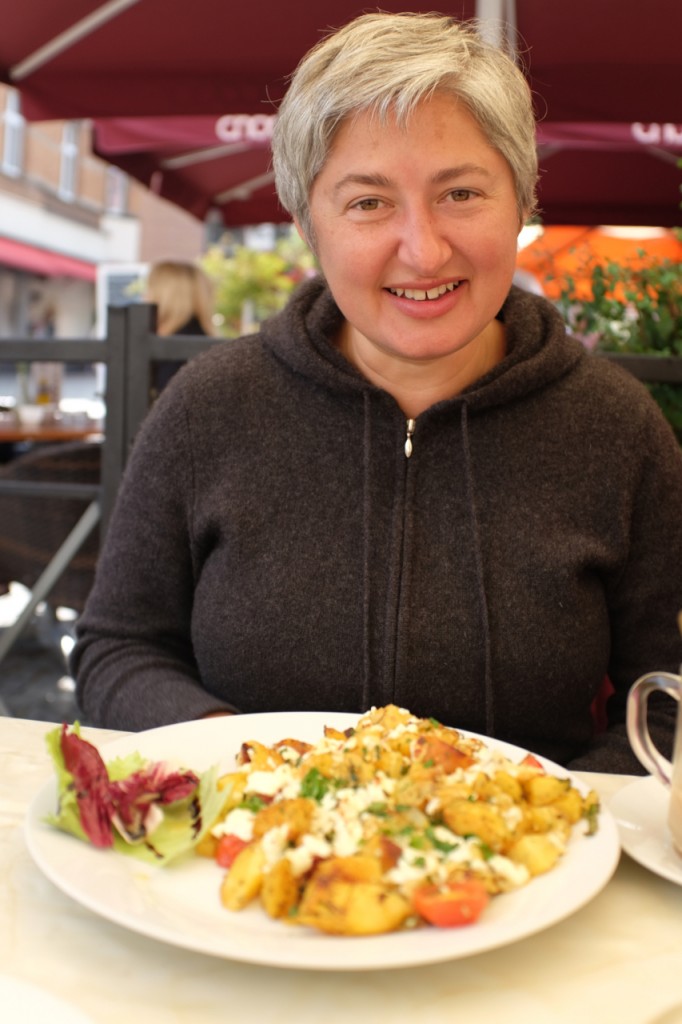 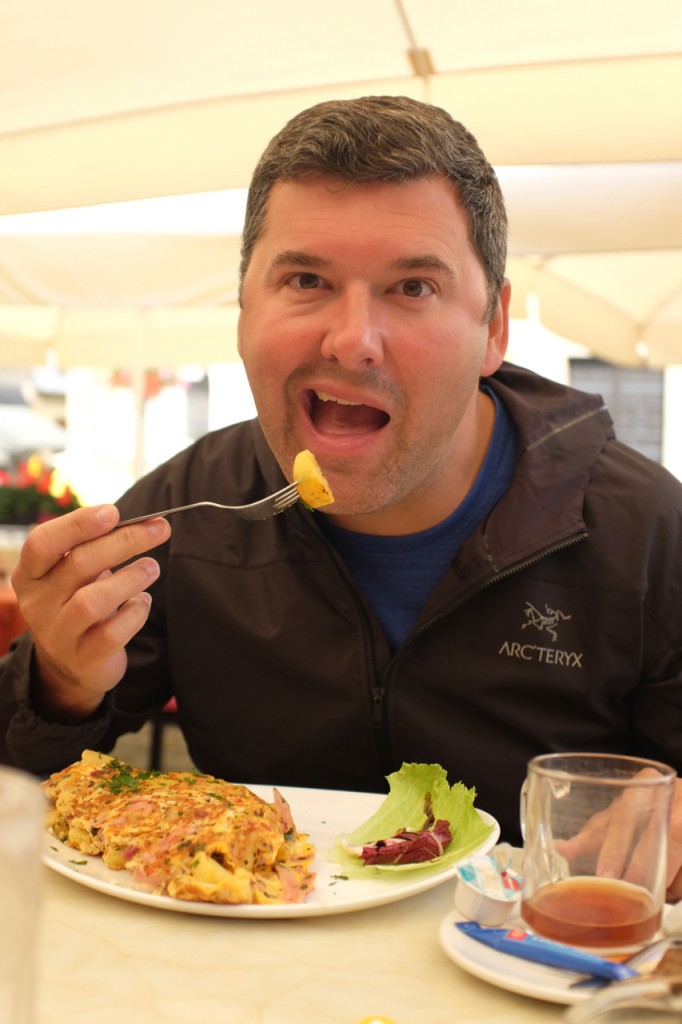 By the time we finished lunch the rain had stopped. While Mila and Jette waited (forever) for the check I pulled out some tools and made some adjustments on my bike. While I was working a group of about 8 spandex-clad cyclists in matching jerseys pulled up on fancy road bikes. They were clearly amused by our bikes, the amount of stuff we were carrying. I think they were even more amused to see that I was strapping hose clamps on a three-speed. They were speaking Dutch to each other and it wasn’t long before one of them wheeled over a little closer and asked me where we were going and where we were coming from. They had a good laugh. We chatted about our trip our bikes, and one of his friends pulled out his phone and showed me a picture of his fancy touring bike with a BOB trailer. While we were talking even more of their group pulled up. They said that twice a year they come to Germany or Switzerland on a big ride. A few jokes about us joining their pace line and they were off.

We hit the road again. It was a nice ride. We had the river and the cruise ships on our right, there was lots of pretty scenery and a good number of old castles on the hills. One has to marvel at how they were built. With the technology of the past it must have required massive amounts of human labor. 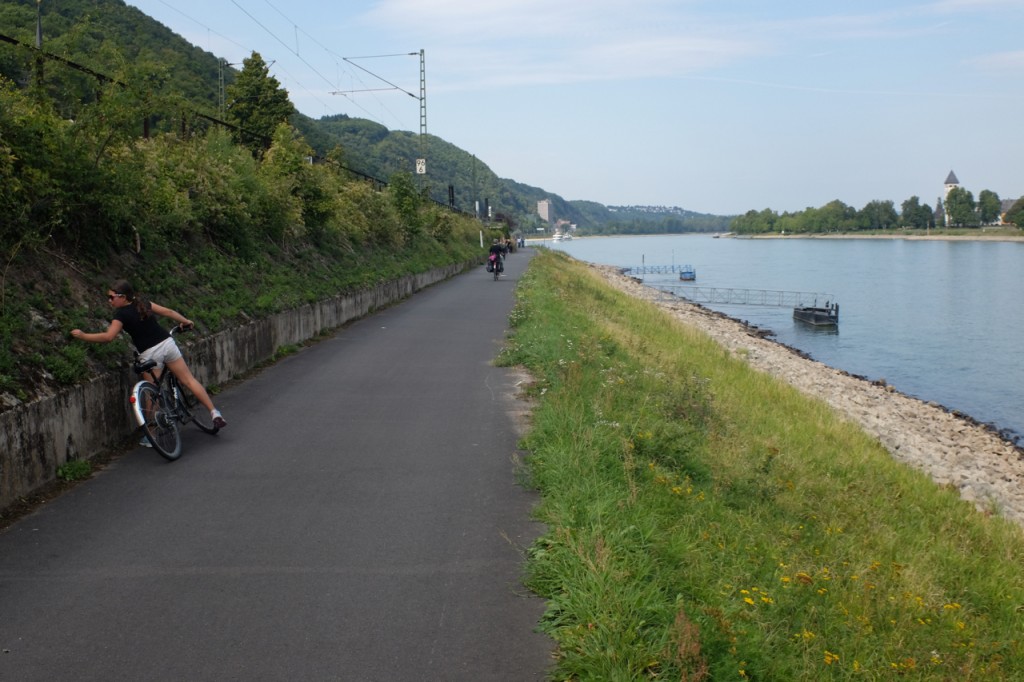 Stopping to check out the wildlife

As we got to the edge of Koblenz we stopped at the Koblenzer brewery biergarten for a refreshing heffeweizen. While we were there I searched online with my phone to see if I could find and book a hotel. I couldn’t find any that would allow me to book online. They were either fully booked or didn’t have online reservations. I called a couple and they were full. For some reason my phone wouldn’t connect to some of the numbers. We decided the easiest thing would be to ride into town and just find a hotel. 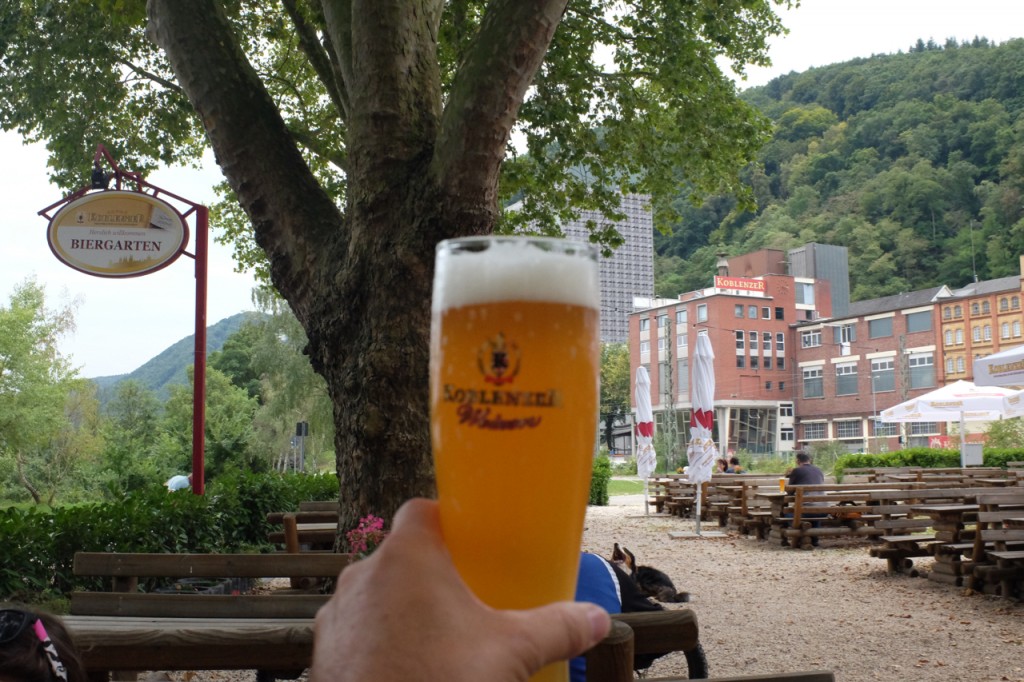 At the Koblenzer biergarten

The trail into town went through a pretty, wooded park. 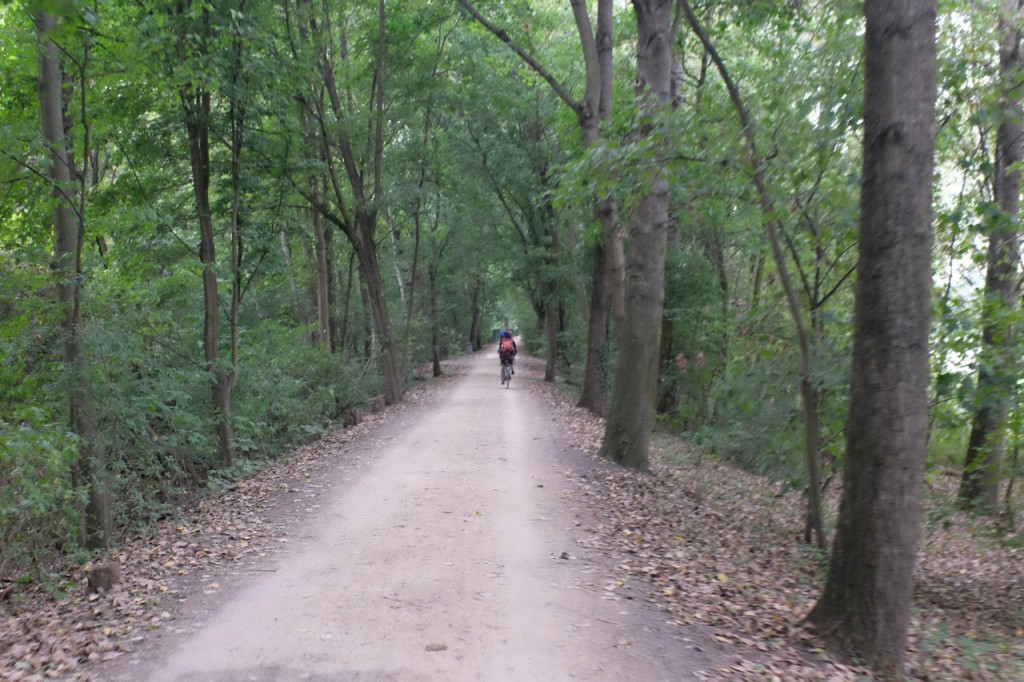 As we came into town, things seemed eerily quiet. We didn’t see any people at all. Had the zombie apocalypse finally arrived?! 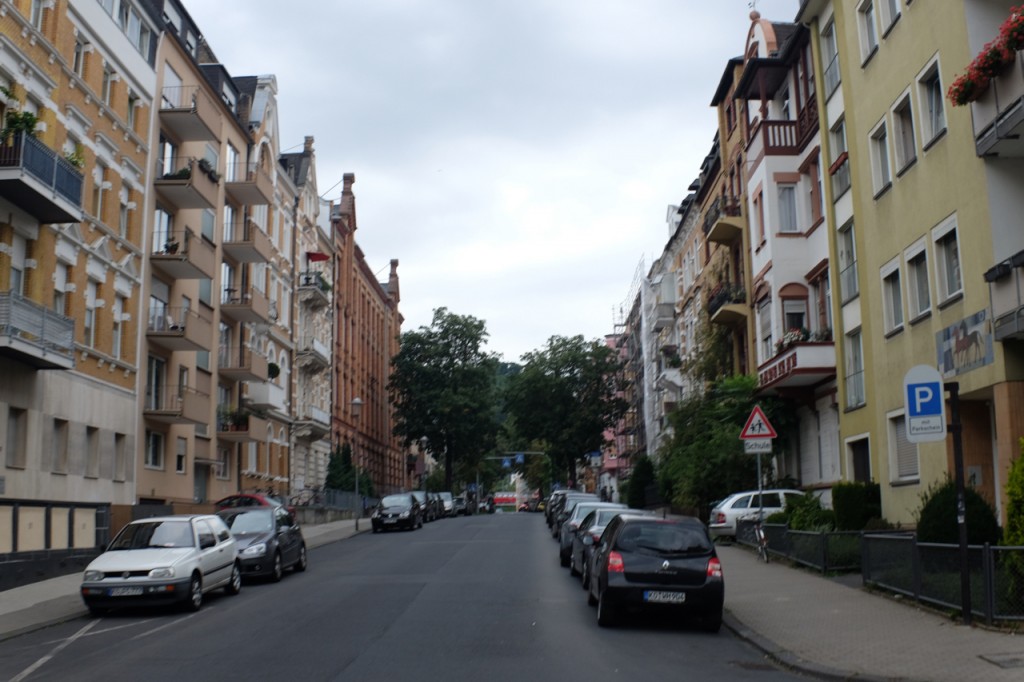 We’d found a few promising hotels on Google Maps, and we stopped at the first one, the Hotel Hamm. They were fully booked. I asked the friendly woman behind the desk if she could recommend another hotel nearby and she said that virtually every hotel in the city was full. She checked some sort of online hotel booking system and called about 8 hotels to see if they had any openings. None of them did. She made a final call and found one that “might” have an room available, but wouldn’t know for half an hour. It was called Hotel B&B and she said that she was not familiar with it and couldn’t vouch for it. She said that they local tourist information office had been calling her looking for rooms and suggested that they might know of some hotels with openings. She drew us a map, gave Jette a candy and we were on our way.

The tourist information office was right in the middle of town, it a very modern new complex surrounded by lots and lots of retail. 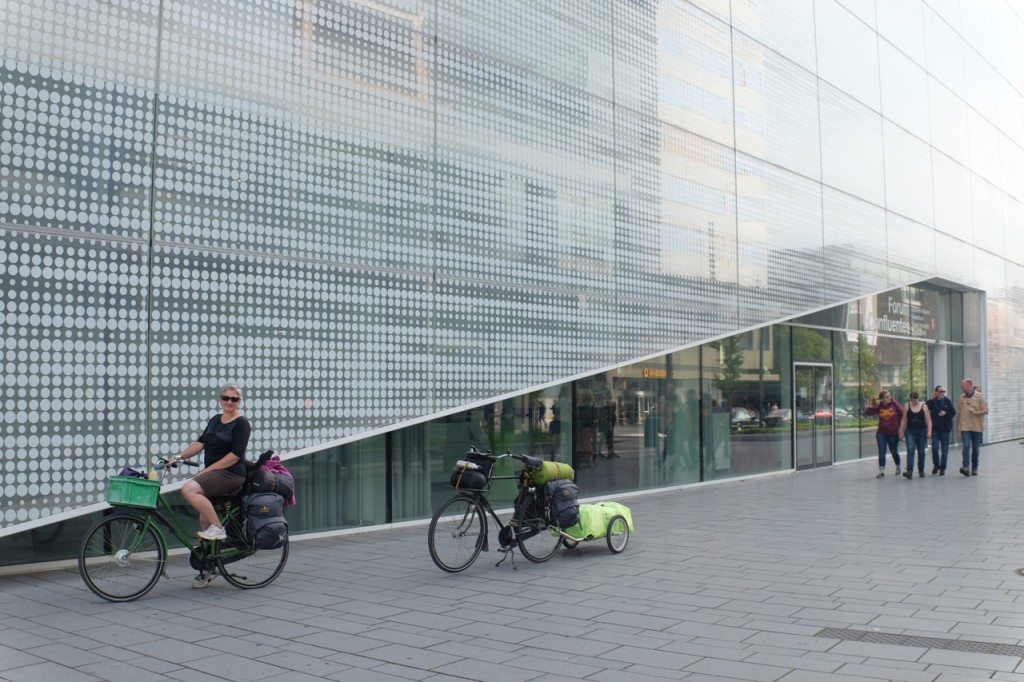 At the tourist information office 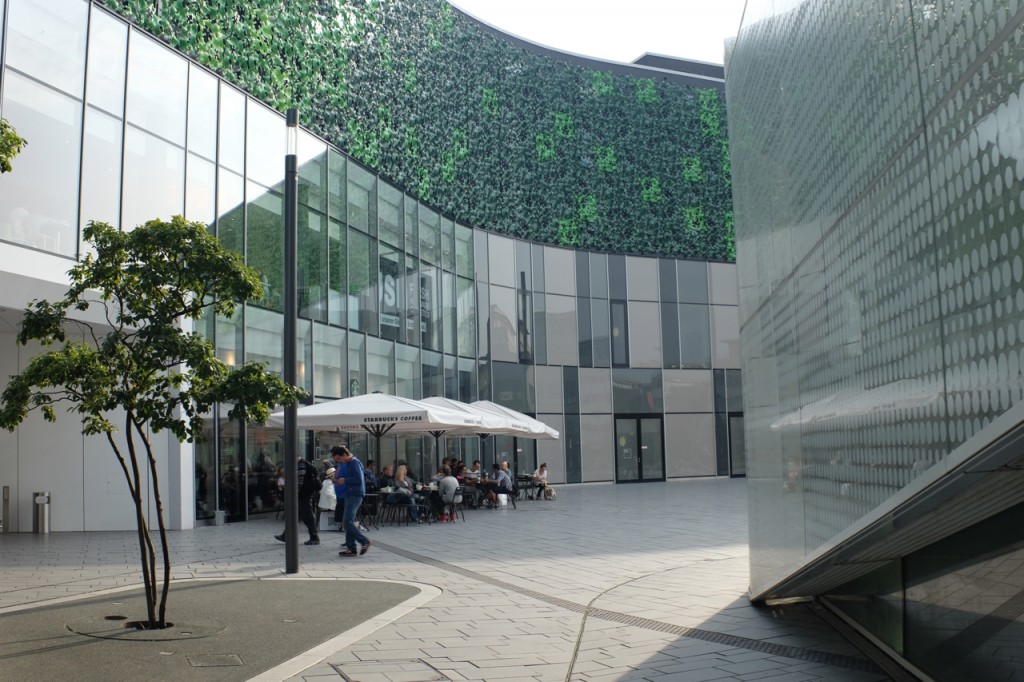 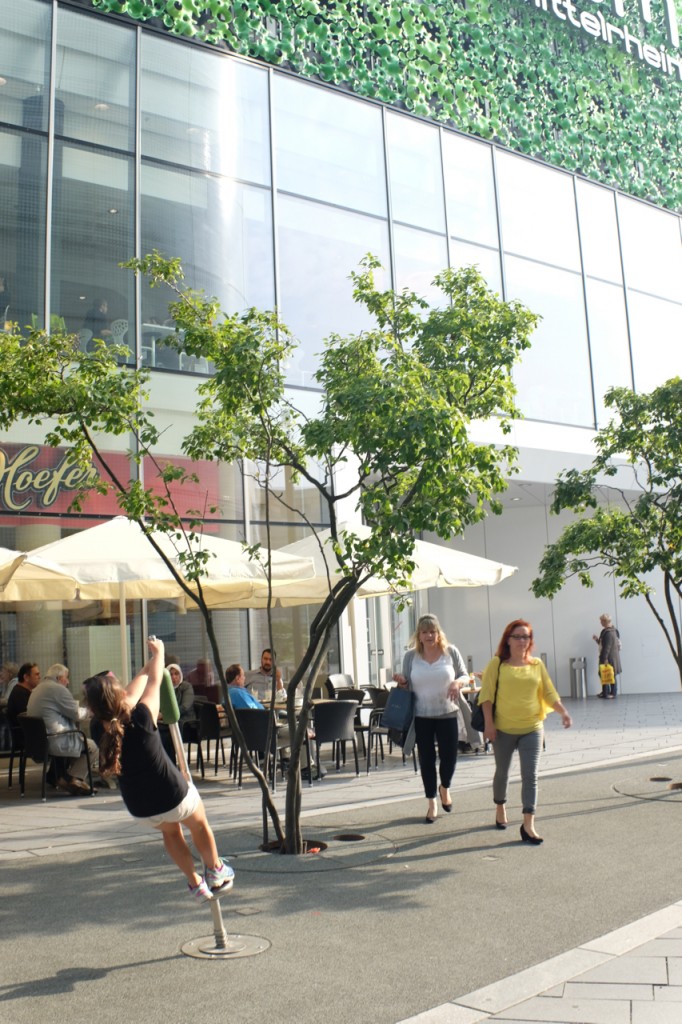 At the tourist office, they just laughed when we asked if they knew of any hotels available. Really.  I told them what the nice lady at Hotel Hamm said about the possibility of an opening at Hotel B&B and asked if they could call them on our behalf. They did and there was one room available!  Obviously we said we wanted it and would be there as quickly as we could. The woman at the tourist information office marked the location of Hotel B&B on a map for us and we were on our way. It turns out Hotel B&B is not a B&B at all, but rather a motel on a busy highway called B&B Hotels. Hey, they have showers, beds and electrical outlets! They even have an internet connection. The Holy Grail. 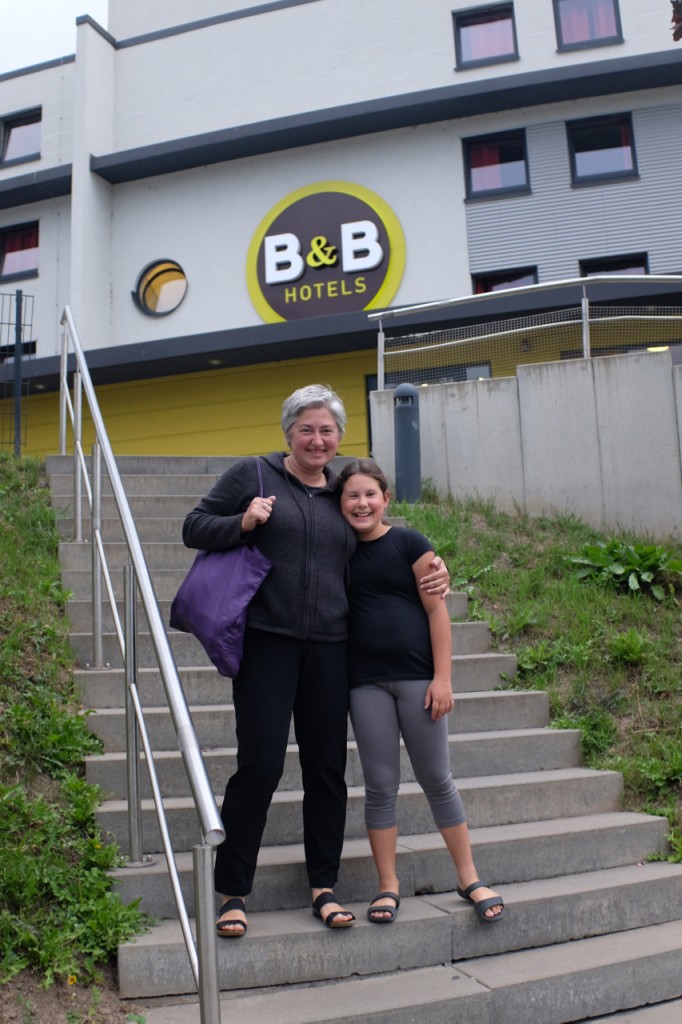 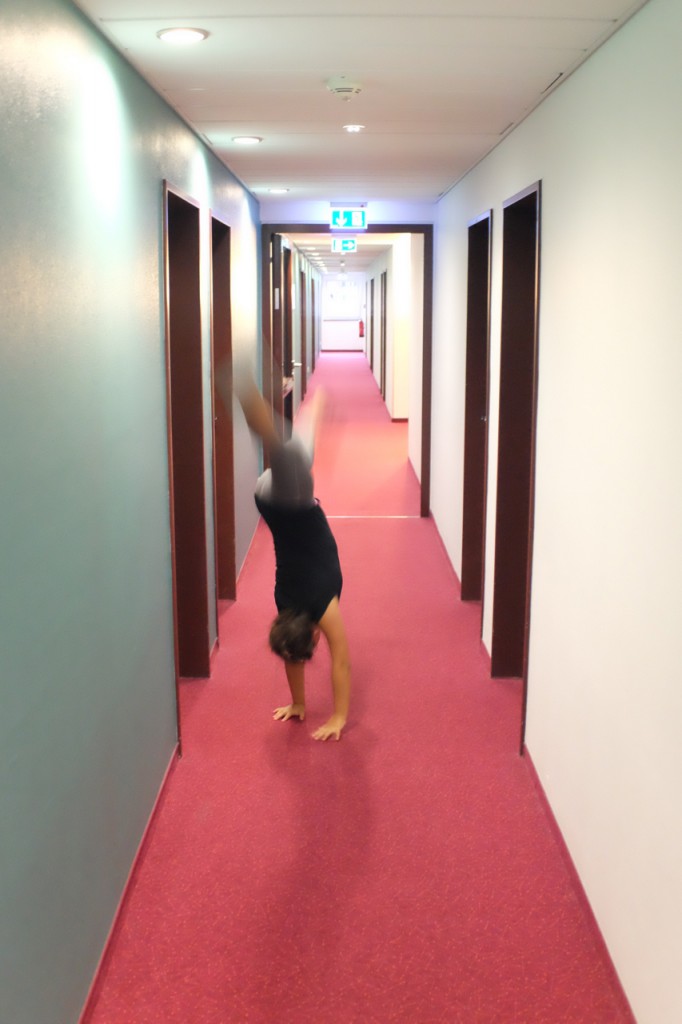 We checked in to the hotel, locked our bikes up in the parking garage and walked into the city in search of dinner. We hit one of the main shopping streets just before most of the stores were closing. Mila and Jette couldn’t resist going into the local T.J. MAXX which in Germany is called T.K. MAXX. 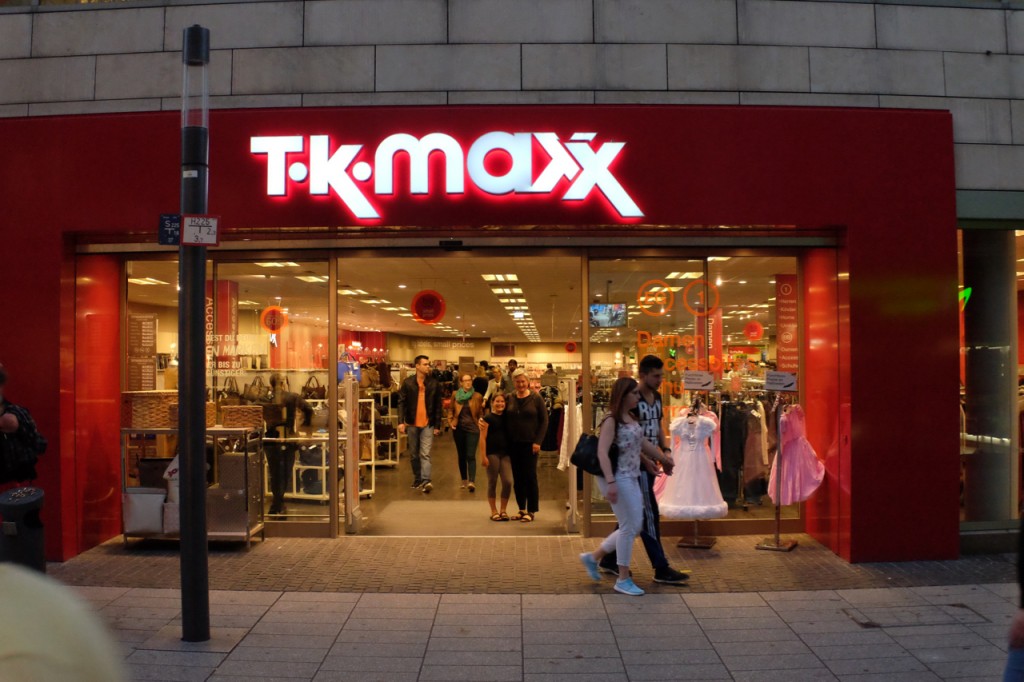 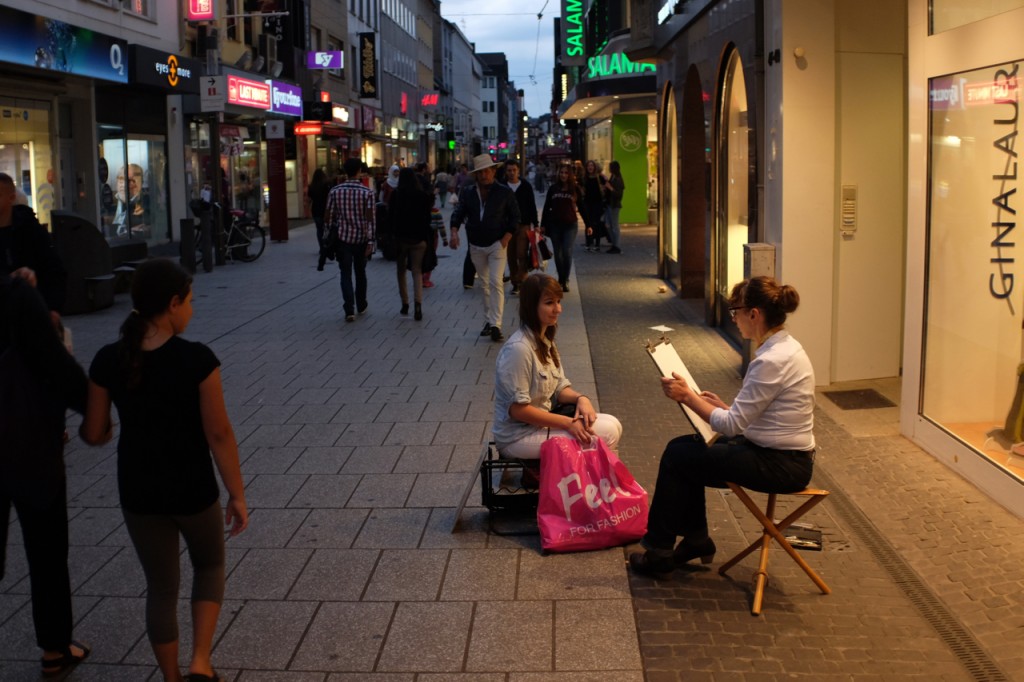 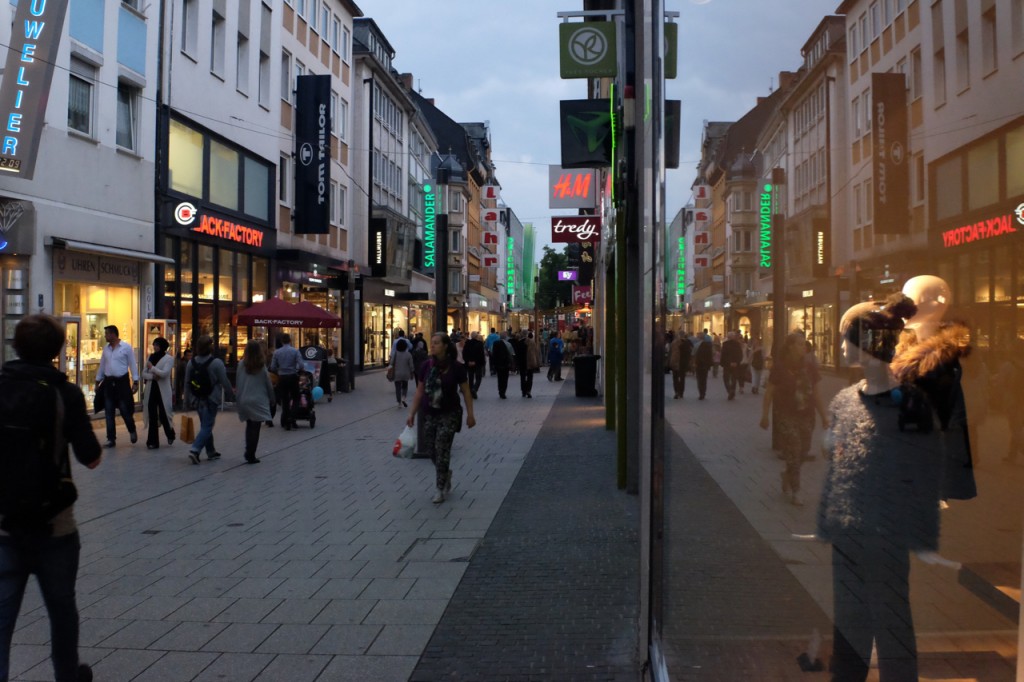 In the almost every town and city we’ve visited the main shopping streets are pedestrian. It is so nice to have quiet streets with sidewalk seating and no traffic or traffic noise. In this regard, the quality of life is so much higher here. In one of the plazas off the main shipping street, there were a number of restaurants. We choose an Italian place and enjoyed a nice dinner under the huge umbrellas. I’d love to get one of these twenty foot umbrellas for our back patio at home! 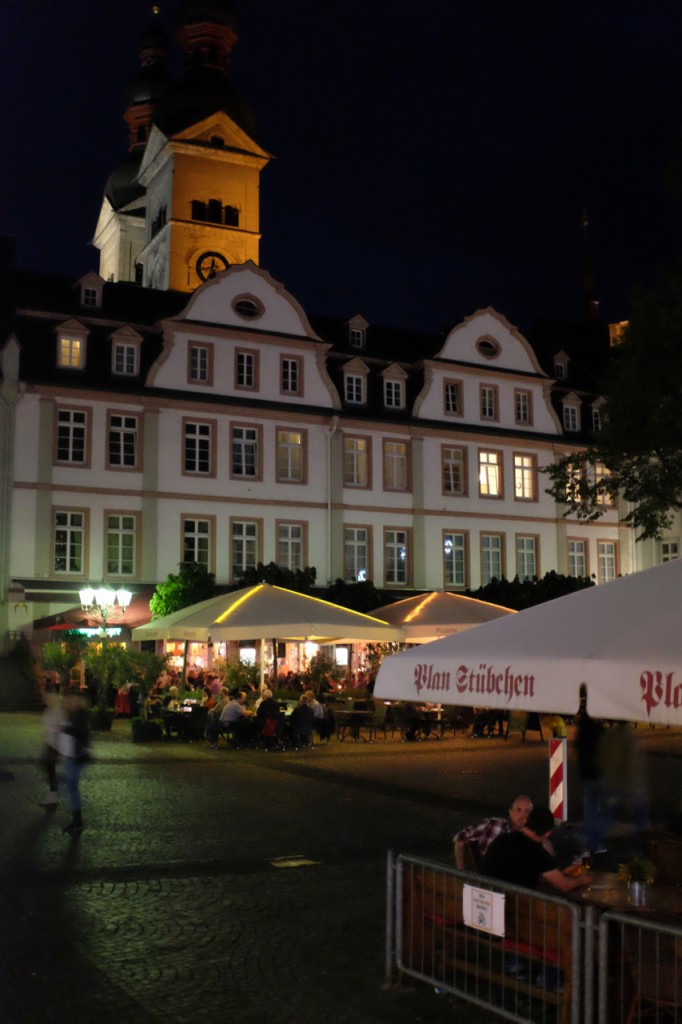 Restaurants on the plaza 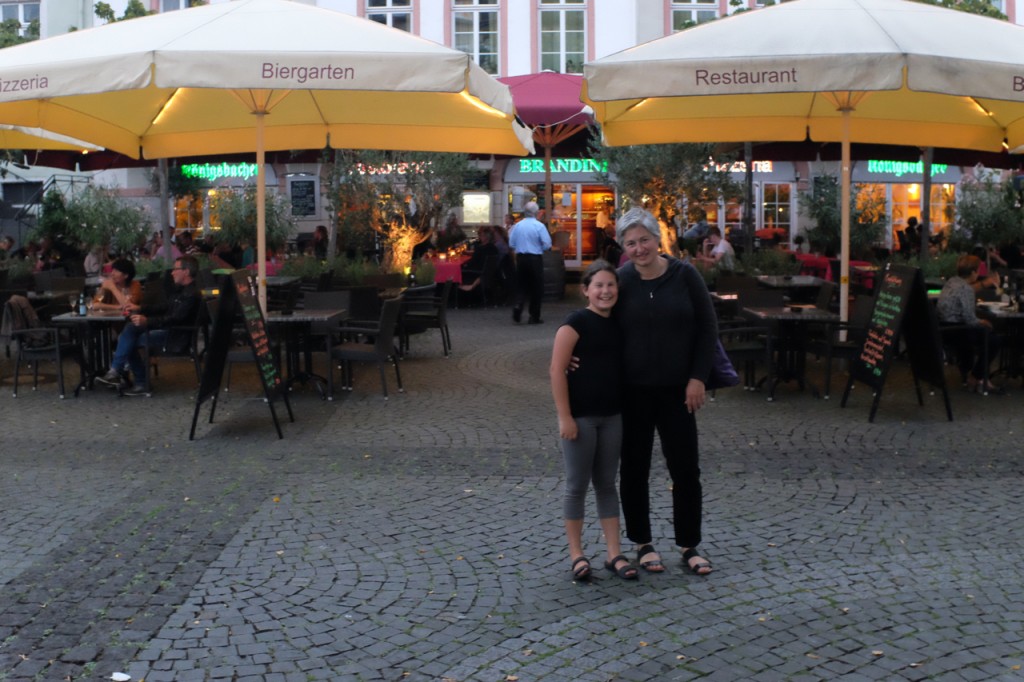 On the way back to the hotel, we giggled at the Oktoberfest outfits for sale in the shop windows. 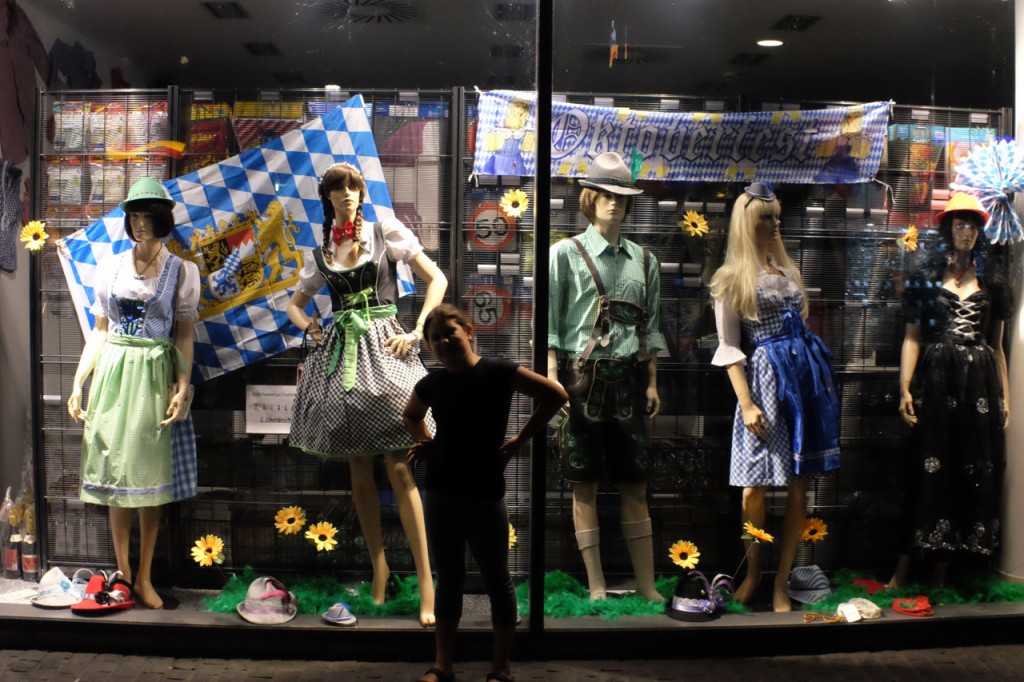 Mila said she would pay good money to see me in the men’s outfit above. Even with the offer of renumeration, I think this is highly unlikely. 😉 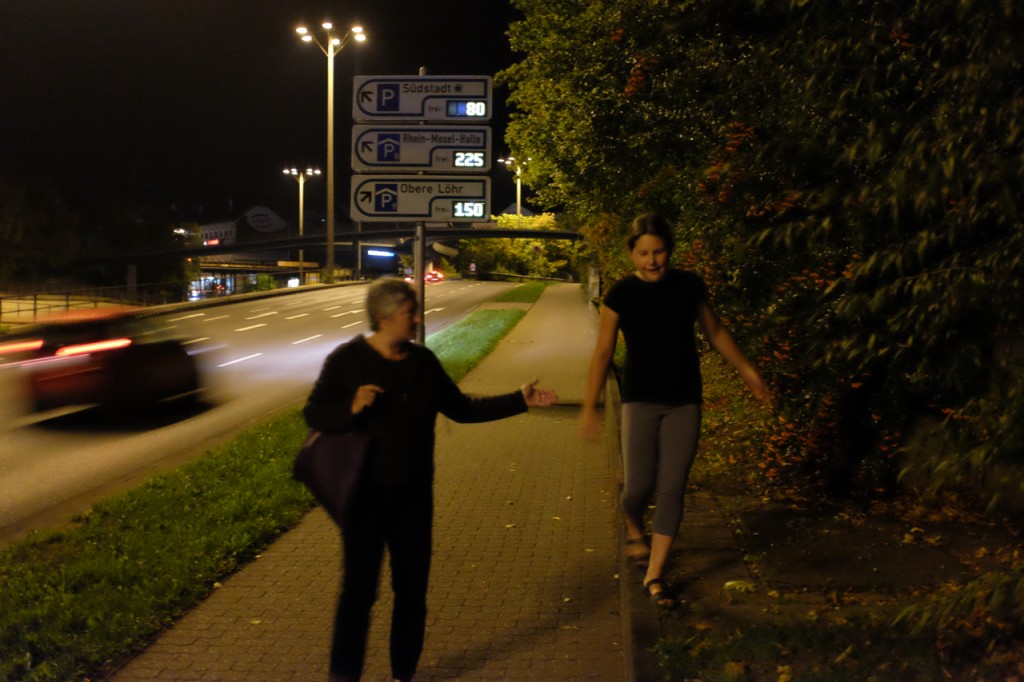 Back to the hotel and to bed.