Another post about our time in Disentis a couple weeks ago… Still playing catch up on blog posts!

Sometime around the beginning of the trip Jette said that she wanted to go on a zip line for her birthday. As luck would have it, we noticed that there was a clip of a zip line in the Camping Disentis promotional video:

We enquired about it, the owner of the campground made a phone call, and we had a zip line session booked. It was 10 days before her birthday, but hey, for a random zip line discovery in a foreign country, you can’t get much closer than that, right?!

To get there we were told (at least as best we could understand with our limited German) to exit the camp, turn left and go up the mountain through four tunnels. At the exit of the 4th tunnel, on the right side we would see some stairs…

So we hopped on our bikes and rode/walked up, up, up… It was all uphill and it was endless. Up the mountain on the narrow, winding mountain highway and through the tunnels. We rode a little, but mostly walked our bikes along the edge of the narrow mountain road. 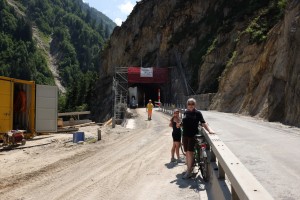 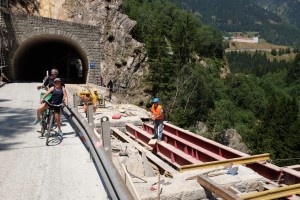 One of the tunnels was under construction. The girders you can see in the photo above are on the edge of a cliff and below there is a sheer drop. It would be the end for anyone who lost their footing. None of the workers wore safety harnesses or were attached to lines. These guys are human mountain goats. 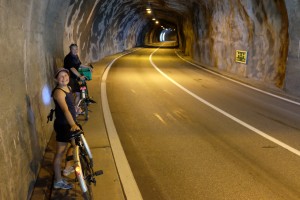 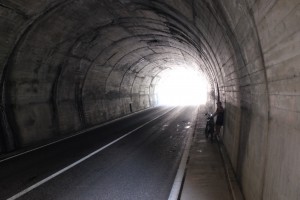 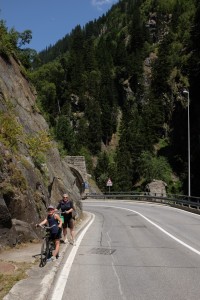 One of the tunnels was 500 meters long! Just getting there was a challenge for us.

Sure enough, at the end of the 4th tunnel, we were greeted by Kim, a muscular man with sun bleached hair and a friendly, weathered smile standing by the edge of the road. It was quite a surprise and seemed quite random as there were no buildings, just a little sidewalk area off to the side of the road at the tunnel entrance.  If you were going to cast a mountaineer for a movie, you could find no better person thank Kim. 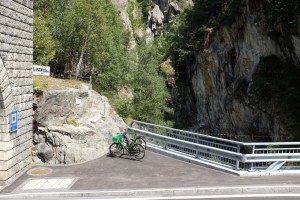 Note the rope bridge in the background of the photo above. This is one of the bridges that you had to cross to get back after doing the zip line. The zip line itself runs from the upper left of the photo to well below the lower right of the photo. To access the climbing and zip line areas you must climb the rock face in front of our bikes.

We were given harnesses and helmets and joined a group of Swiss Scouts (boys and girls, age 12 to maybe 16) for a brief orientation. 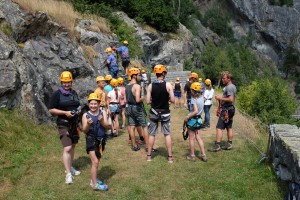 Each harness had a tether with two carabiners. Wherever there were lines marked red and white, we were to clip in using both carabiners, each clipped onto the line in opposing directions. There were iron rods, bent into “”U” shapes and hammered into the stone to act as steps. Lines indicating that you should clip in were marked with red and white tape. We clipped in and climbed the steps. When our progress was blocked by an anchor on the line, we unclipped and reclipped, first one carabiner and then the other – so we were always secured by at least one of the carabiners at the end our our harness tether. After the orientation, each person, regardless of age, was responsible for his or her own safety and that of their climbing mates. There were two staff members in the area, but generally speaking, after orientation, you were on your own. 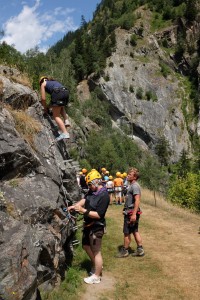 None of our photos even begin to do it justice or suggest the scale of the scene, but the zip line ran at a steep angle across a rocky gorge with a river at it’s base. There were a variety of cable bridges spanning the gorge at various heights and angles – these were the only way to get back once you had crossed on the zip line. None of them had stable footing. Steps were fashioned from pieces of wood hung from cables with no horizontal support, so they swung in the wind and underfoot. Crossing them was like stepping from one crooked swing to another. We were clipped in to a cable above, so a fall would not be a fatal fall of 20 or 50 or 100 feet to the rocks of the river below. A misstep and a fall would leave you dangling by your harness tether and require that you pull yourself up the cable, regain your place on the bridge, and finish the crossing. 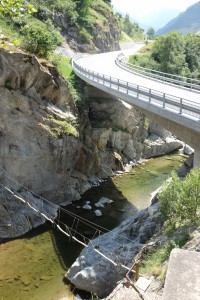 The easiest cable bridge and the roadway 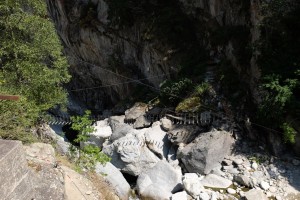 The zip line and some of the bridges 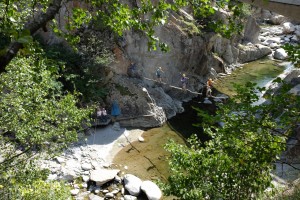 The end of the zip line and the easy bridge back

In the photo above, the small blue pad on the face of the cliff is the only thing between you and splat should the zip line equipment or its operator fail. The wooden platform where the two people in white shirts are standing is the place where, after your zip line session, you can elevate yourself to unclip from the zip line. After that you are on your own getting back. You can scale the rocks to the right and cross the “easy” bridge, or climb the rocks and a series of wooden structures and iron steps in the cliff face to get to other more difficult bridges. 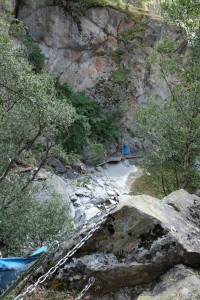 Another view of the zip line 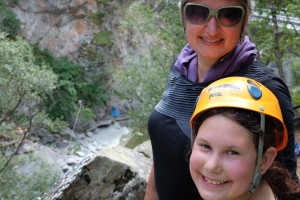 Our intrepid zip liners getting ready for the plunge!

Before we did the zip line across the gorge, we did a little rock climbing. 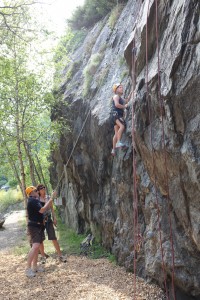 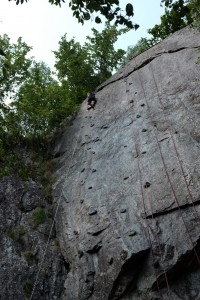 Getting close to the top.

Then it was time for the zip line. I went first, followed by Jette and then Mila. The scariest part is the initial jump off the cliff at the beginning. There is 6 or 8 feet of shallow drop before the sheer drop of the cliff face and there was enough give in the cable and length to the tether that my feet dragged ground momentarily before I was fully over the edge, giving strength to the question, “Is this thing going to hold?!”

Jette was next and she was all smiles on the way down. 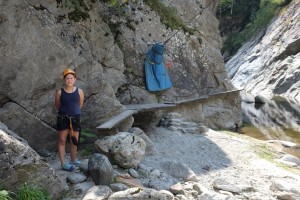 Made it! At the bottom of the zip line. 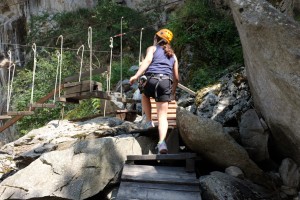 Heading up to the easy bridge. 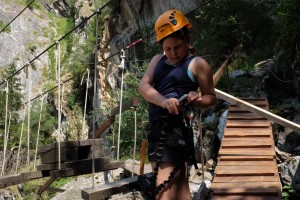 Clipping in at the foot of the bridge 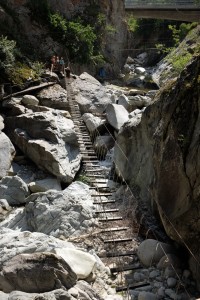 Another view of the easy bridge. It looks low from this angle, but in some places it is quite a long drop to the river below. 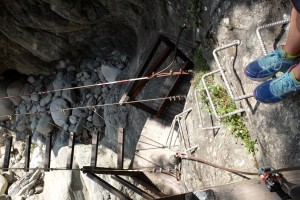 The end of the easy bridge and the beginning of the wall climb.

We don’t have any photos that really capture it, but the bridge crossings and climbs back up were challenging. It can be a bit nerve wracking watching your almost-ten-year-old un-clip and re-clip to get around an anchor bolt on a vertical rock wall 100 feet above a stone filled, rushing river!

The videos make the bridge crossings look easy. They were harder than they looked!

Jette is amazing. She met the physical challenges as well as the physiological ones.  Even as we ran out of energy, she was very careful with each of the dozens clip-outs and clip-ins as we climbed and traversed the bridges. As we climbed, we talked about how fatigue can lead to mistakes. She consistently mindful and made no mistakes. I on the other hand had to re-clip twice after failing to get one of my carabiners properly secured on a cable.

After riding/walking up the mountain, two zip line sessions, bridge crossings, and climbs back up, we were totally exhausted. 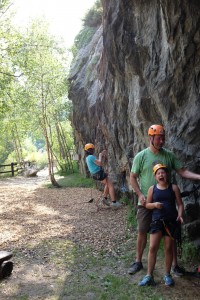 Thank goodness camp was down the mountain…and they served ice cream! 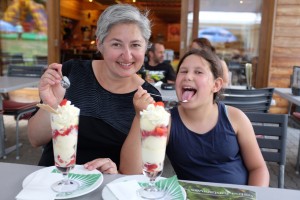 Not a bad early birthday celebration.