The flight from Lima to Cusco was quick – only about an hour – but the views were amazing. Even with an aisle seat I caught some amazing glimpses of the snow capped Andes. Beautiful! Cusco is so high in the Andes that when we landed it seemed like we barely had to descend. On the ground in Cusco

Cusco sits in the mountains at more than 11,000 feet above sea level. Altitude sickness is an issue for many people above 8,000 feet, and it can be quite serious. From the moment the plane depressurized Mila and I could “feel” the altitude. For me the sensation was that of pressure in my head, especially behind my eyes, and a slight sense of being short of breath. I constantly felt like I needed to take a deep breath. The symptoms weren’t too bad, but definitely noticeable. Mila said that it felt like her head was in a vice, getting squeezed at the temples. Jette didn’t feel it at all. Ah, to be young!

We caught a taxi from the airport to our hotel in the old, touristy part of the city. The hotel was a quirky little place, but fine for our needs and we met some nice fellow travellers there each day at breakfast. We only come alive at night!

We were welcomed with cups of hot coca tea, a popular local drink which they say is good for relieving the symptoms of altitude sickness. It tasted like a smokey green tea, and was pleasant enough, though for me at least, it seemed to have no effect on my symptoms. 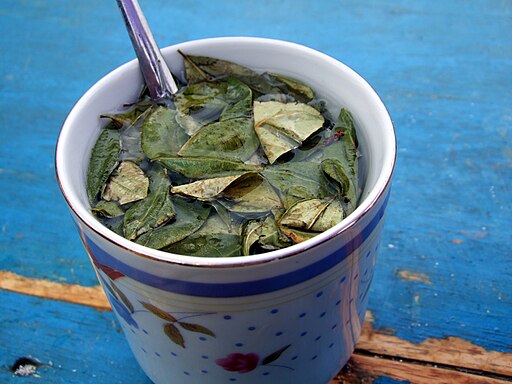 Coca tea is made by steeping the leaves of the coca plant in hot water. Coca tea is not to be confused with cocoa tea, also popular in Peru. Cocoa tea is made from the shell or husk of the cocoa bean – the same bean from which chocolate is made!

Speaking of coca, here’s a little bit of trivia. The original recipe for Coca-Cola included cocaine, a drug made from the chemical processing of coca leaves. What most people don’t know is that Coca-Cola is still made with coca leaves. In fact, in 1922 when cocaine was outlawed in the United States and the import of coca leaves outlawed, the Coca-Cola Corporation was given a special exemption, allowing them and only them to legally import coca! Currently, this is done through their partner, the Stepan company. Wikipedia describes their coca operations:

The plant is the only commercial entity in the USA authorized by the Drug Enforcement Administration to import coca leaves, which come primarily from Peru. Approximately 100 metric tons of dried coca leaf are imported each year. The cocaine-free leaves are sold to The Coca Cola Company, while the cocaine is sold to Mallinckrodt, a pharmaceutical firm, for medicinal purposes.

Aside from tea, there are many coca products – from ointments to snacks – that are popular in Peru. With our tea cups empty and our bags safely stashed in our room, we ventured out to explore Cusco and find some dinner. In the old part of the city there are lots of narrow cobblestone streets. Walking down some of them was really unpleasant as some of the sidewalks were so narrow that when you encountered someone coming the opposite direction there was not enough room to pass each other without stepping off the sidewalk or ducking into a doorway. Normally such narrow streets and sidewalks are cute and quaint. But in this instance there was so much traffic, so many cars, that it was was very unpleasant.  Drivers whizzed by, often driving way too fast for the conditions. Every taxi that passed blasted its horn, hoping for a fare. It was loud and, as we would discover, dangerous.

As we were walking down one very narrow street, a driver came so close to the curb that his side mirror came into the sidewalk area, and smashed into me. Luckily it was a newer car with “folding” mirrors, so it simply bruised me a bit as the impact flipped his mirror back. Of course the driver didn’t even slow down. Welcome to Peru.

In the end, we found a nice dinner at quiet little restaurant. Lomo Saltado – a popular Peruvian beef dish. There are more than 2,000 varieties of potatoes in Peru, so you never know what color your french fries might be! Cusco was the political and religious capital of the Inca Empire. For a very short period from about 1400 to 1534 the Incas assembled a massive kingdom that stretched along the West coast of S. America from Colombia to Chile. At that time, it was the largest empire in the world. It was short-lived because the Spanish conquistadores arrived in the 1520’s and over the next 30 years decimated the population with fighting, enslavement and disease. In some parts of the Inca Empire only about 1 in 60 people survived. Very difficult times for the indigenous people.

After fishing and mining, tourism is the third largest industry in Peru, and modern day Cusco is a very touristy city.  It gets about 2 million visitors each year. In the old part of the city it seems as if there is nothing but shops, hotels, touts and street vendors catering to tourists. We’d heard so many people rave about Cusco that we were expecting something, well, different. We wanted to like Cusco, but we just couldn’t. In fact it may have been one of the only places we’ve been that made us downright grumpy. Despite the fact that Cusco didn’t win our hearts, we still found lots of things to like. The setting is beautiful, there is lots of charming architecture, and the town is obviously rich with history. Standing in front of Iglesia San Pedro, near the San Pedro Market in Cusco Picarones near the market in Cusco Cusco had Jette climbing the walls! Schoolgirls walking past the mercado Much to Jette’s dismay, guinea pig was on almost every menu.

When the Spanish arrived, they demolished many Inca buildings and used the stones to build churches and other colonial structures of their own. In Cusco you can see both old Inca structures and Spanish ones. One of the amazing things about many of the older Inca structures is the stonework. There are some truly massive stones assembled with amazingly precise joinery and without the use of mortar. Like the pyramids of Egypt, one really has to wonder how they were able to do it with the tools and technology of the time.

While mainstream archaeology attributes much of this work to the Incas, there are a number of people well outside the mainstream who theorize that many of these walls and structures were built as long as 15,000 years ago by an unidentified, pre-Inca culture using “lost ancient high technology.”

With this we are entering the realm of “aliens built the pyramids” – very alternative theories – but kind of fun! We watched a few of these videos and read a bit about this. While we can’t say that we fully embrace the theories, they did provide a really fun framework for looking at the structures we visited. And we saw a lot of old structures in Peru! After hours, days, and weeks of looking at site after site it can be very easy to glaze over and see them all as just another pile of Incan stones! Adding a little dash of “conspiracy theory” and approaching it like an archeological mystery to be solved made it more fun and engaging.

What if the mainstream archeologists are wrong?
Could there have been a culture of megalithic builders here long before the Inca?
What evidence can we find?
What techniques were used in the construction of this?

These kinds of questions had us  analyzing building techniques, gathering evidence, and testing theories rather than just wandering through and saying, “Hey look, another Inca stone wall…”

Late one afternoon, we took a taxi to Saqsaywaman, the Incan ruins in the hills above the city. The price of admission was much higher than we expected. We had read that the admission was about $3 USD each, but the cheapest option for foreigners turned out to be $74 USD for the three of us. For foreigners, prices are much higher and instead of being able to buy a ticket to enter the site, you can only purchase the expensive “Boleto Turistico” a one day pass to a handful of different sites, or the “Boleto General” an even more expensive ten-day pass to 16 sites. We weren’t planning to visit many of the sites on the list, so we debated whether it was worth it for that price.  Ultimately we decided that we were here, so we might as well do it. As it turned out, we didn’t have enough cash on hand and they didn’t take credit cards!

So, unable to enter, decided to walk along the adjacent road and peek at the ruins through the fence and hedge they have planted to block the view. As we walked, we spotted a footpath that led up an adjacent hill. Up we went and were rewarded with a very nice view of the ruins. We could only see them from a distance, but the view was good and the vantage point gave us a very good sense of the overall layout of the site. We were content. The site of Saqsaywaman above Cusco The massive stones of Saqsaywaman.

After taking things in from our hillside viewpoint, we walked back down to Cusco. Along the way a local dog adopted Jette. It walked with us for about an hour, all the way down the mountain and back into town. Looking across the valley at Cusco. Buddies on their way into town.

We stopped at a shop to buy the dog a treat, but while we were inside she left! Jette got to feed the other dogs we met on our way back to the hotel. The collectivo to Ollantaytambo.

The next day, we caught a collectivo to the old Inca town of Ollantaytambo. Ollantaytambo would be our base for exploring Machu Picchu and the surrounding area. But that’s the next blog post!