Today was Jette’s 10th birthday and it was a good one!

Our recent posts have been “catch up” posts about things we did days or weeks ago.
Today’s post is actually about today. Well, last night and today.

Last night was our first night in our Amsterdam apartment (and our third night in a real bed since the trip began!). With a kitchen at hand, Jette cooked us all a nice dinner of grilled Salmon, pasta and broccoli. 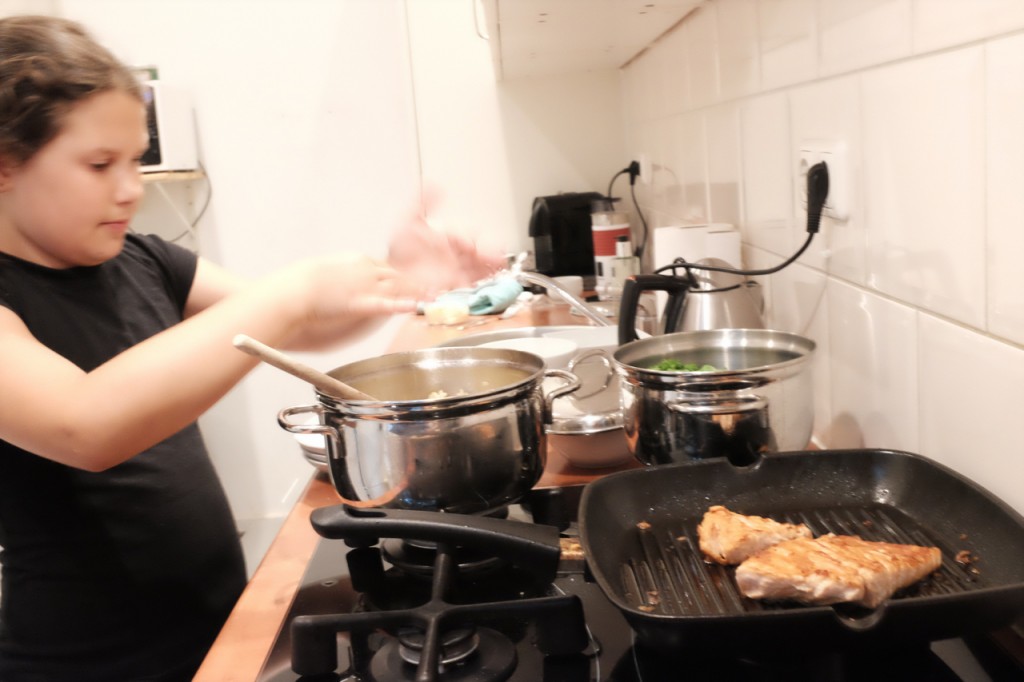 Parmesan going into the pasta 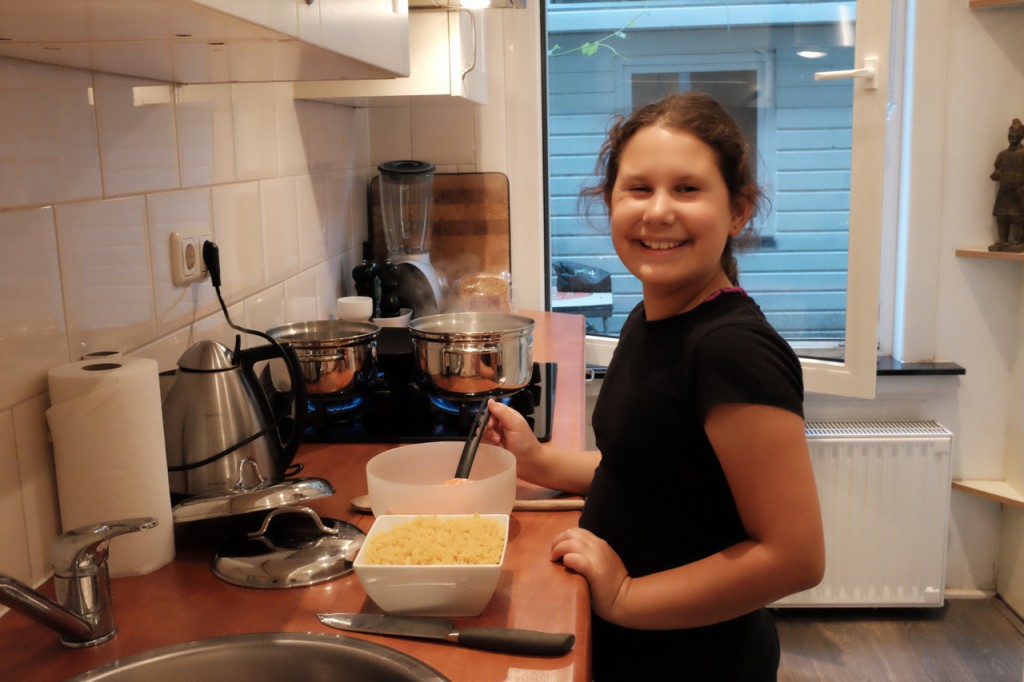 The pasta is ready 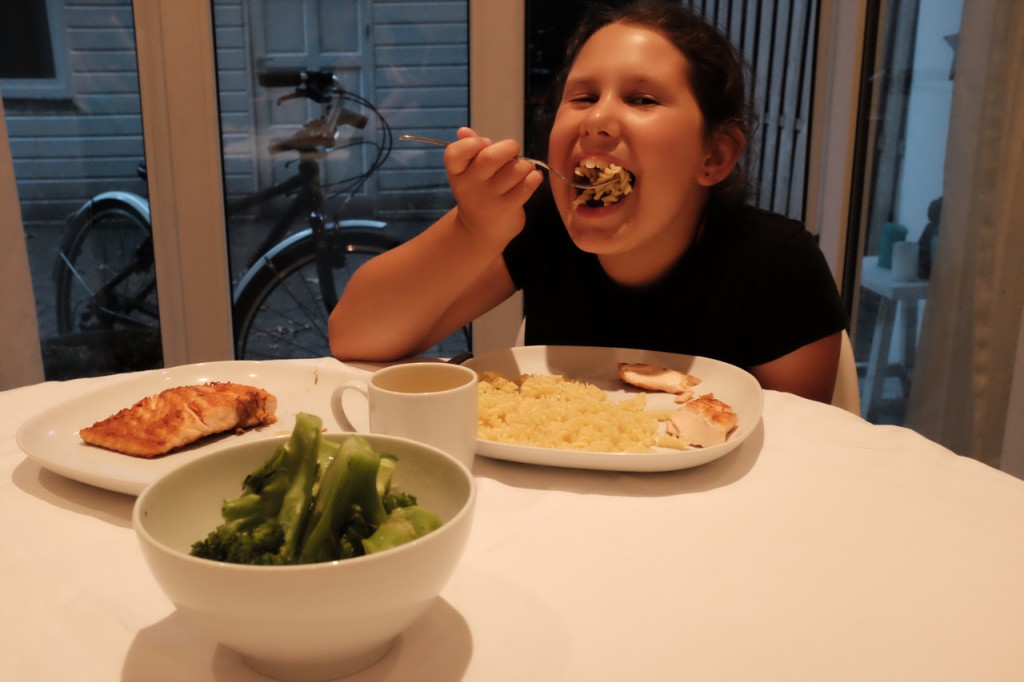 The chef likes pasta, that’s for sure! The salmon was perfect too. Good job chef Jette!

When she awoke this morning there was a birthday message waiting for her on a decorated table. 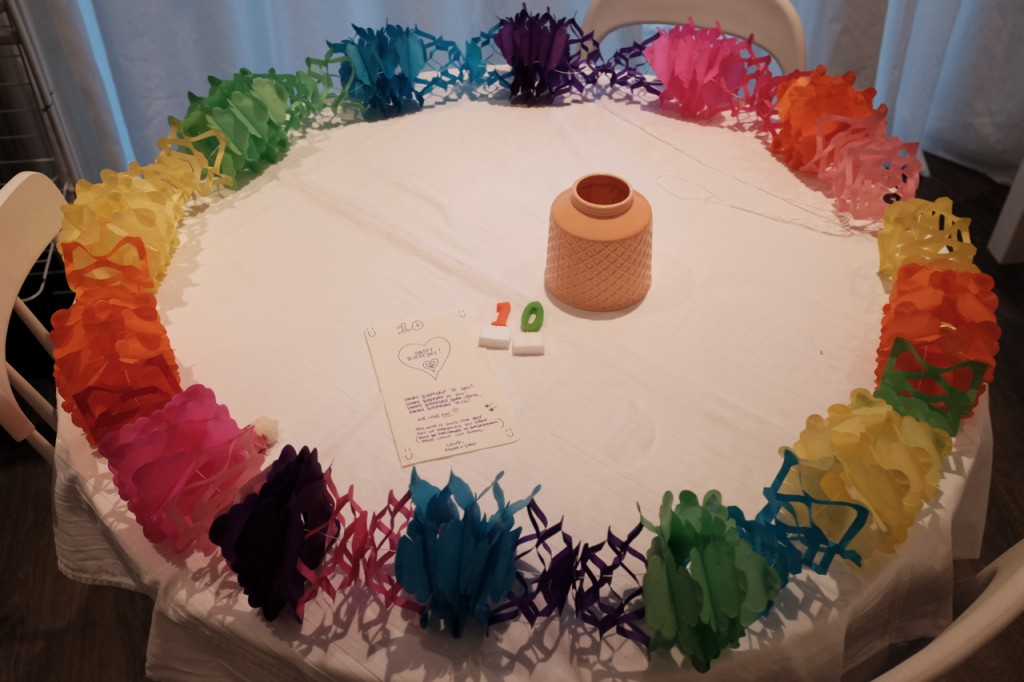 And ten balloons. We had fun with the balloons. There might have been a balloon fight in bed as we blew them up. And a couple games of balloon volleyball. Then we got our clothes on and the camera came out. 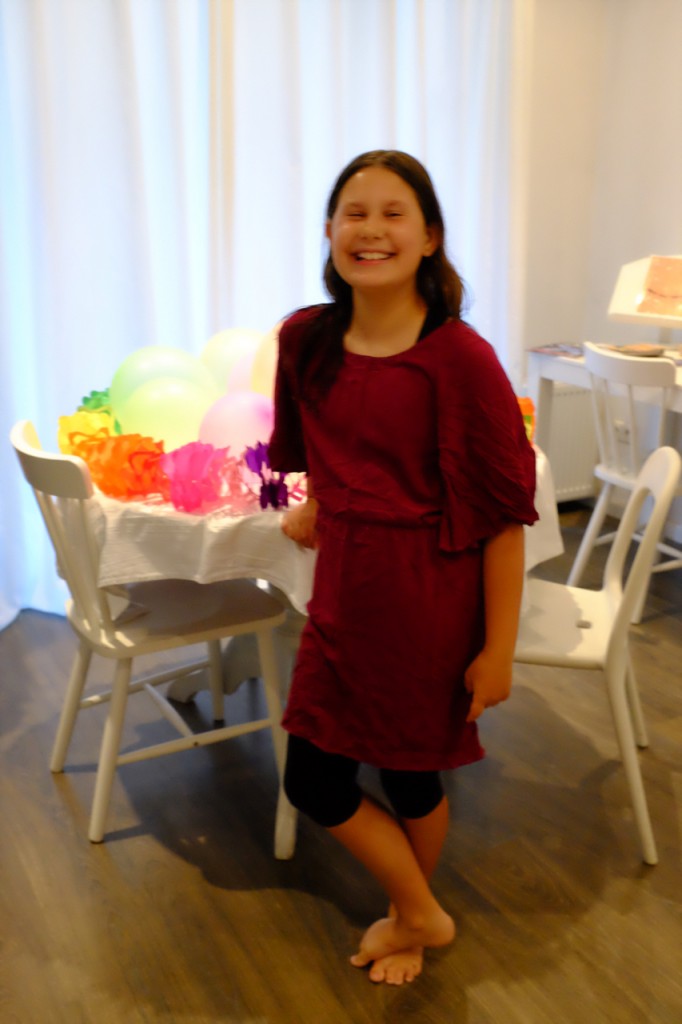 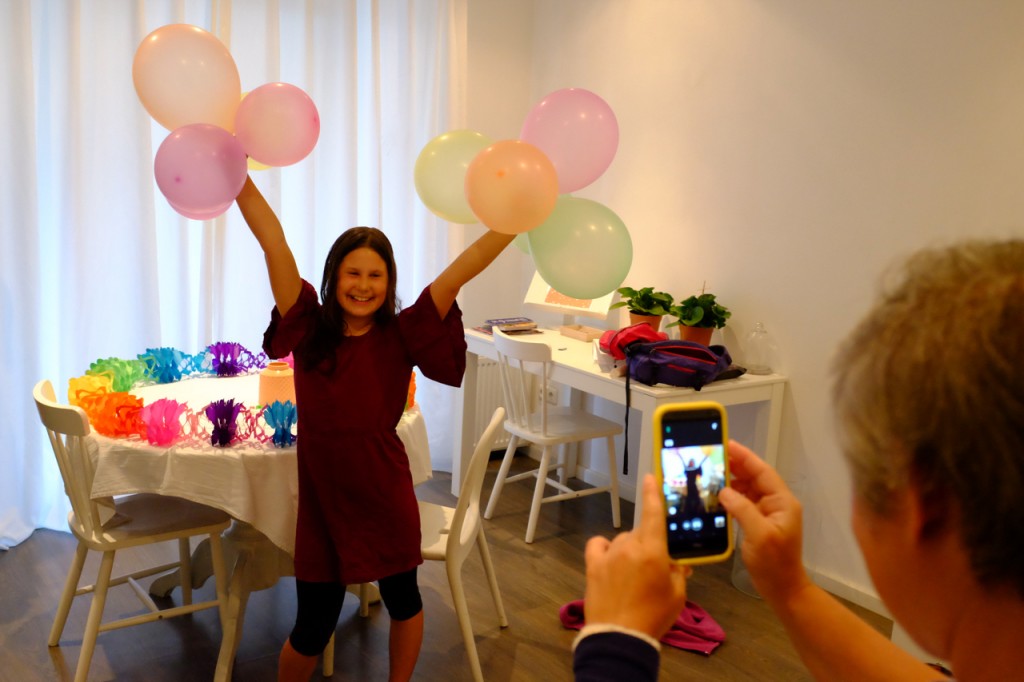 Posing for photos with 10 balloons. 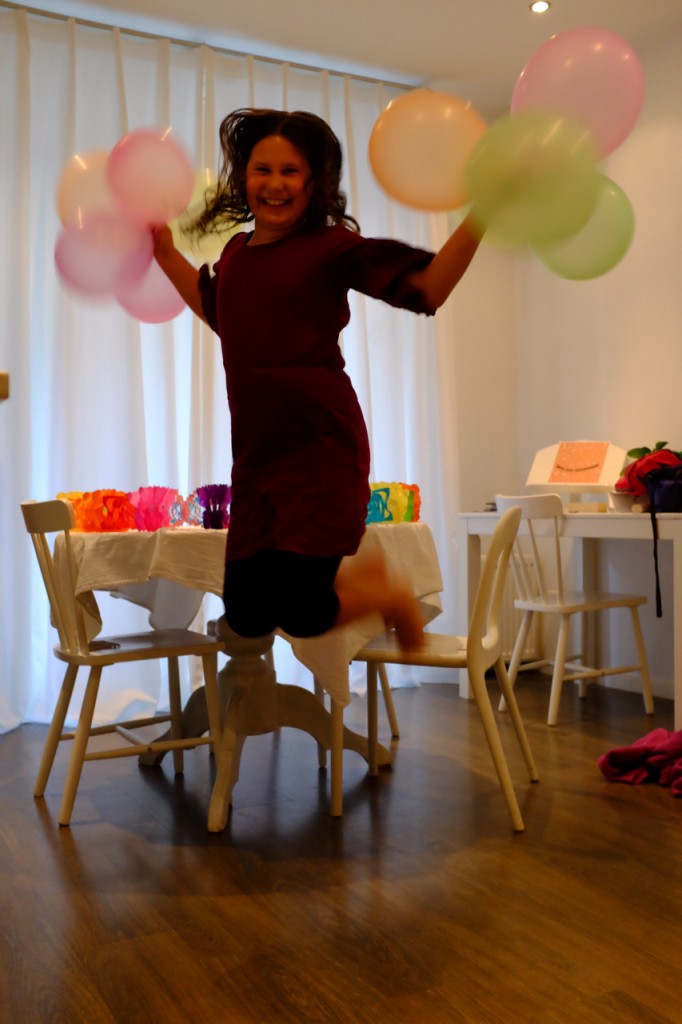 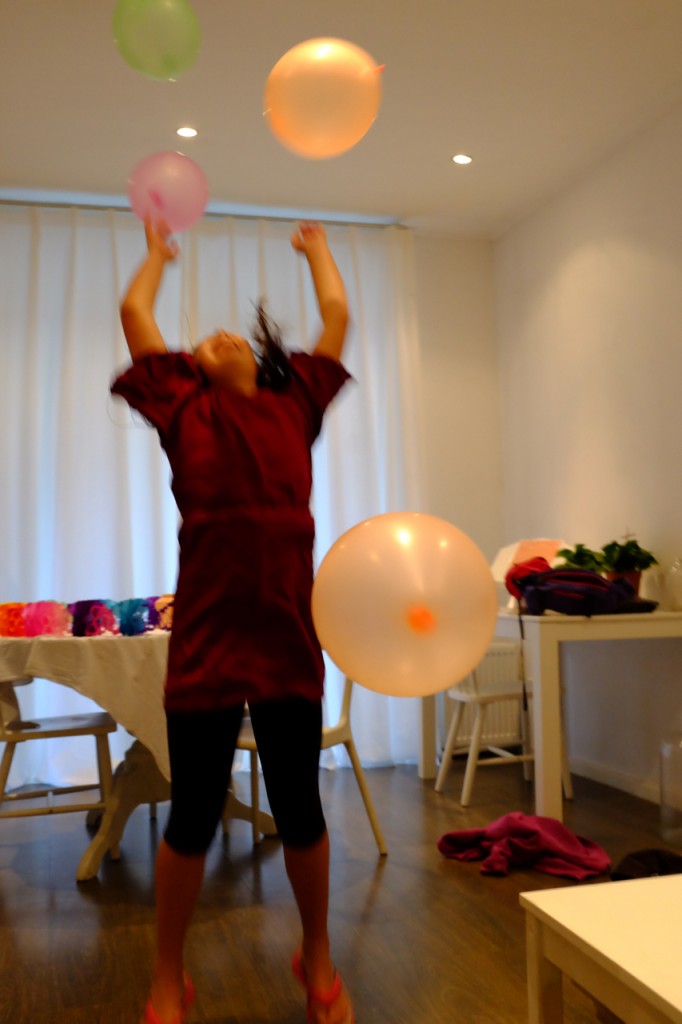 We ventured out to Bedford Stuyvesant. No, we did’t head “home” to NYC, it’s one of the new cafes that has popped up in the neighborhood since the last time we were here. It’s a cute spot with a comfy, funky vibe. The weather was cool and there was a light sprinkle of rain. 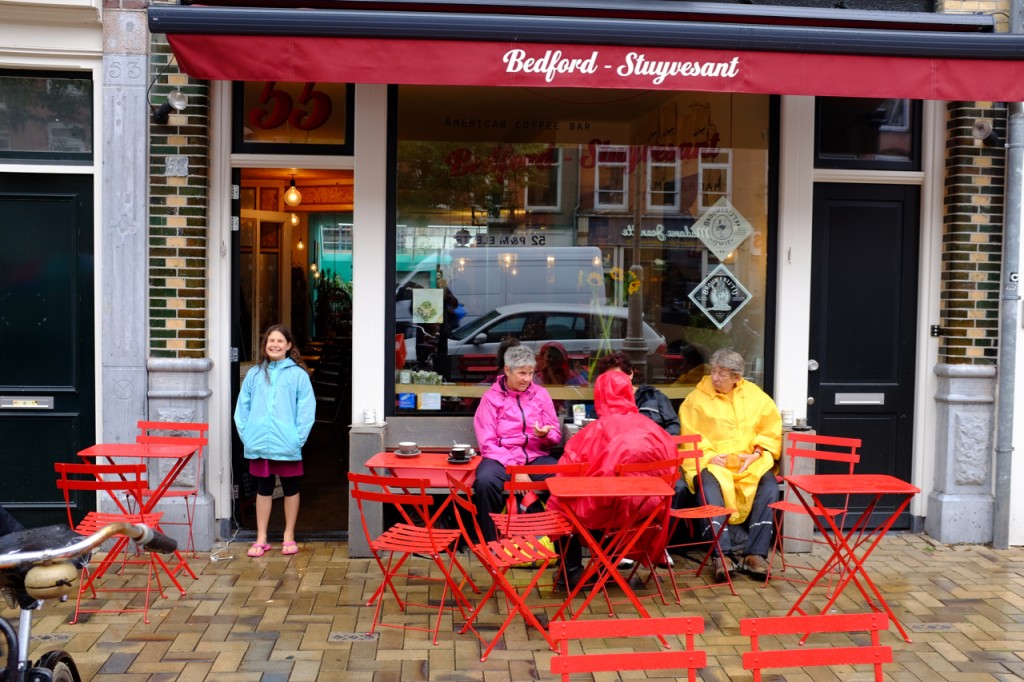 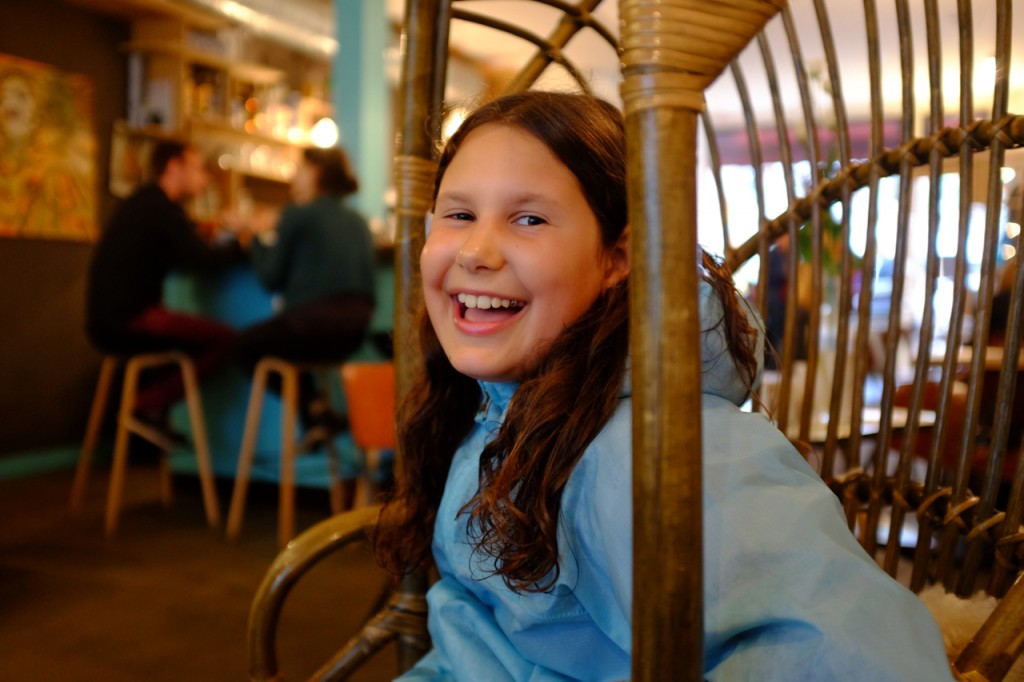 The birthday girl got the groovy hanging rattan chair. 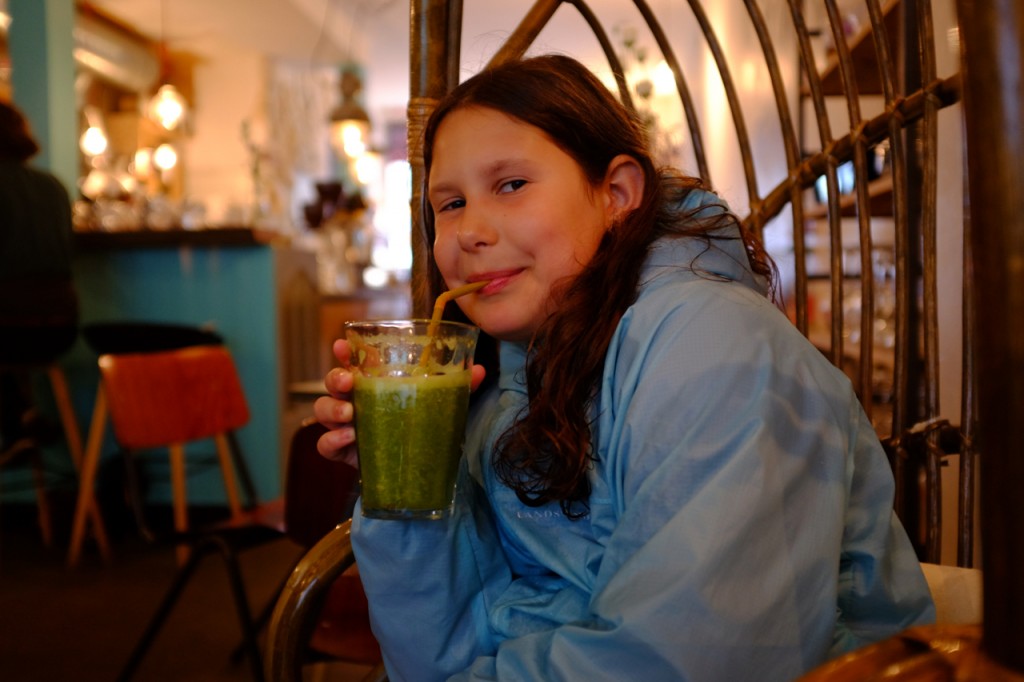 We stopped by the park on the way to the tram. 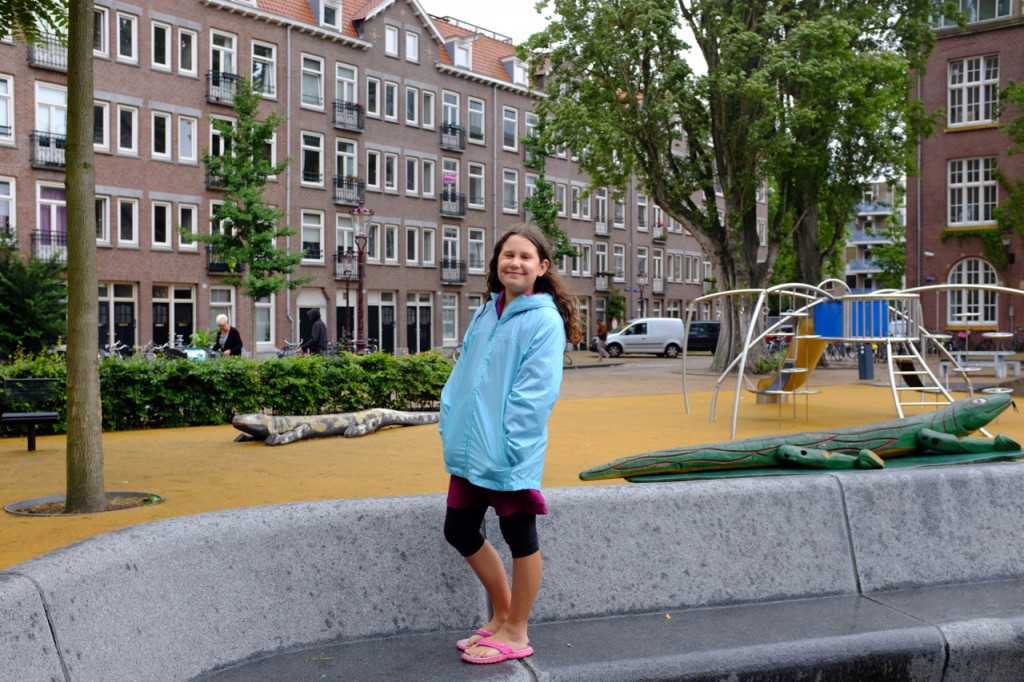 Our East Amsterdam neighborhood is called Indische Buurt and many of the streets are named after the Indonesian cities and islands of the old Dutch “East Indies.” The park has an Indonesian theme too, with hand carved animals native to the islands – Komodo Dragons, Crocodiles, Tigers. It is an ethnic neighborhood that is quickly gentrifying. At this moment in time, it feels a bit like the old East Village or Lower East Side.

We hopped on Tram 14 and went across town to La Perla one of our favorites spots in the Jordaan neighborhood, for an early lunch. Jette had specifically requested their tomato, basil, buffalo mozzarella sandwich as her birthday meal. While on the tram, both the rain and wind picked up. We hung our wet coats on the rack in the corner and enjoyed a delicious lunch at one of our favorite restaurants in Amsterdam. 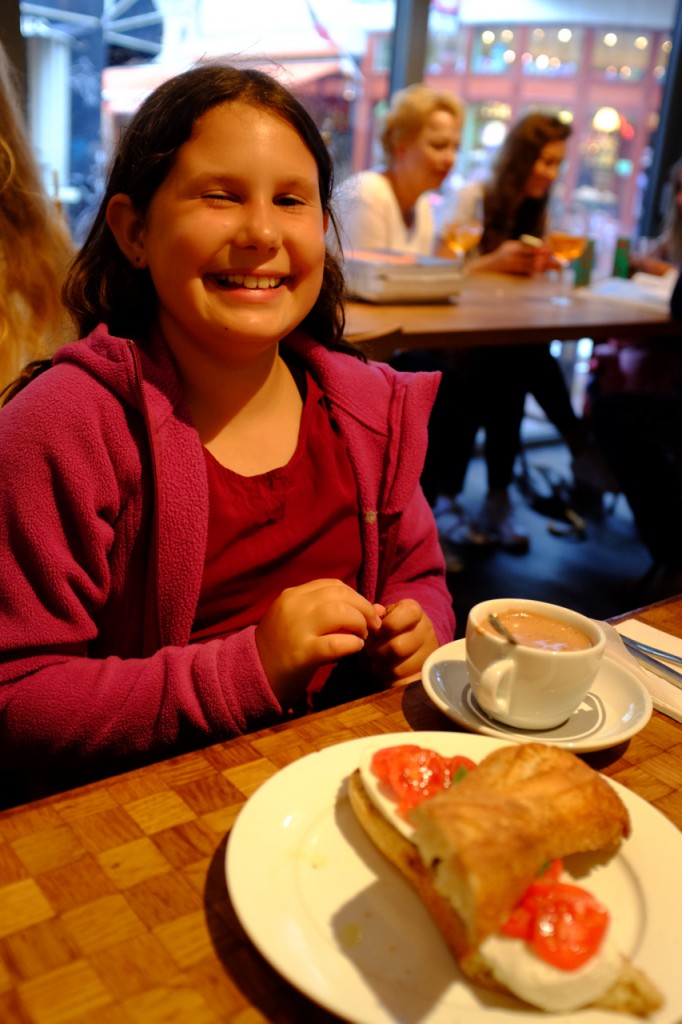 A birthday tomato basil, mozzarella sandwich. And a hot chocolate! 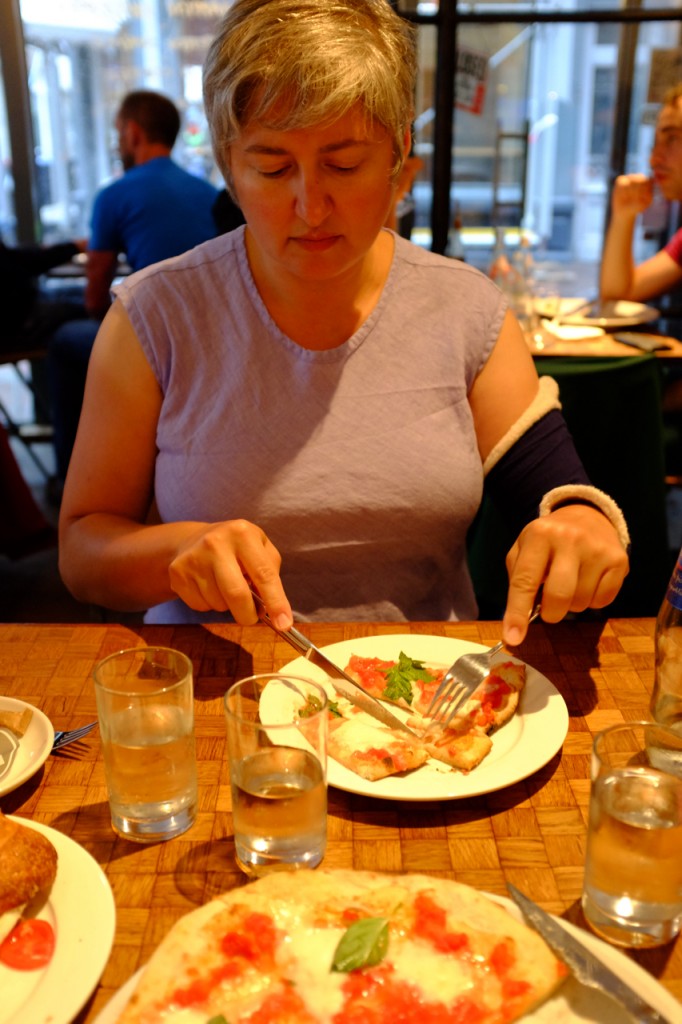 Mila trying to eat pizza euro-style (knife and fork). Not so easy with a cast. 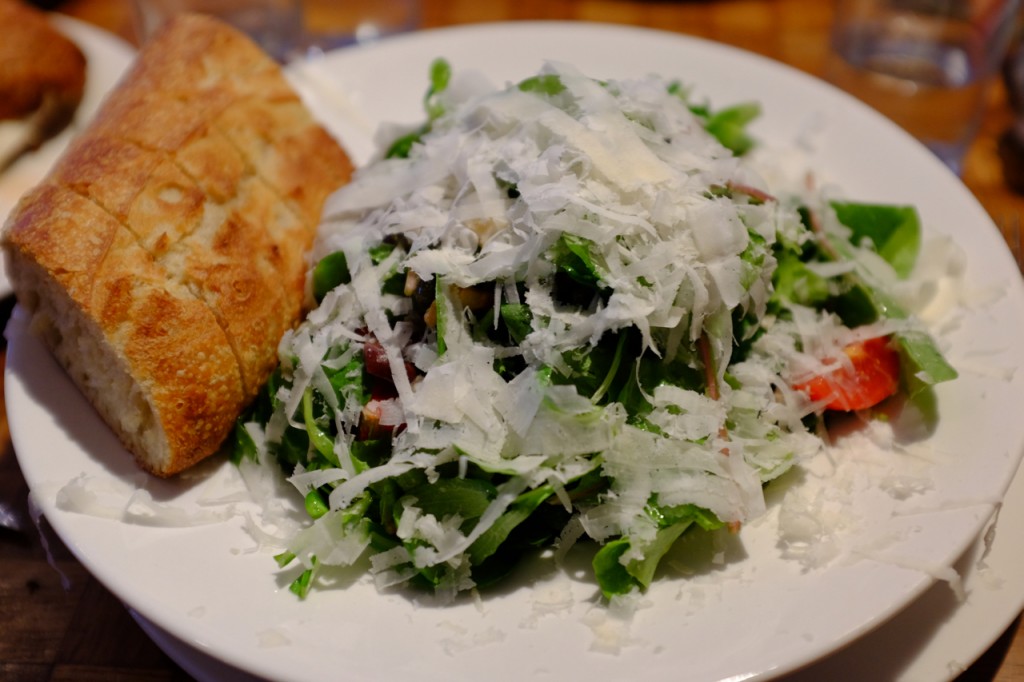 Best salad in Amsterdam. And the bread is awesome too. 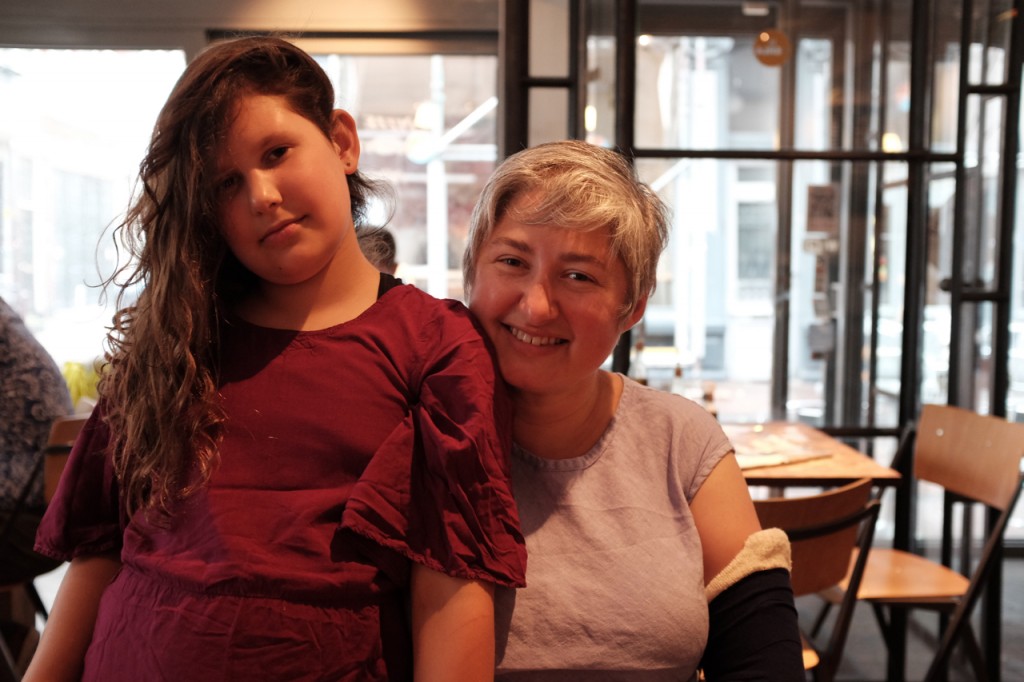 When you’re 10 you can flip your hair and pose with attitude.

Then we walked across the street to Jette’s favorite candy store for a piece of licorice. 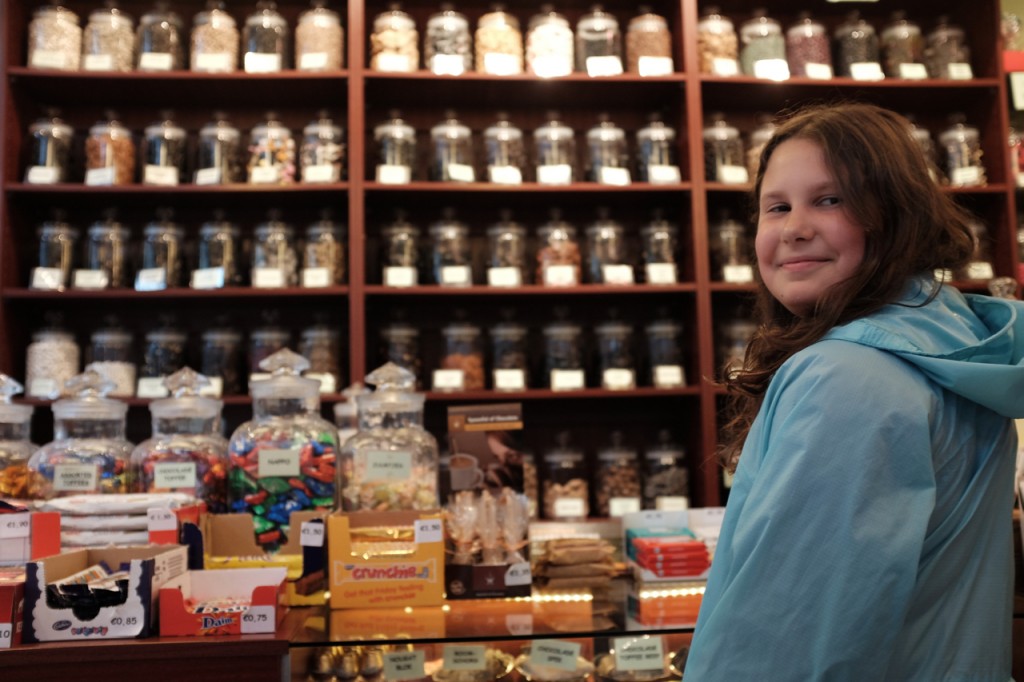 Despite the howling wind and blowing rain, we walked down the the “9 Streets” neighborhood where we spent hours window shopping. We bought a few things too.

We joked that the coldest winter ever was a summer in Amsterdam. The temperature was in the 50’s and the wind was quite strong and gusty.  Mila and Jette popped into a store along one of the canals by Westerkerk. There was commotion across the canal and I walked across the street to see what it was about. A huge, old tree had fallen in the wind and was blocking the street and tram tracks. As I walked back across the street and into the store, I heard a huge CRACK! behind me. The big tree right next to me had succumbed to the wind, cracked at the trunk and fallen too! 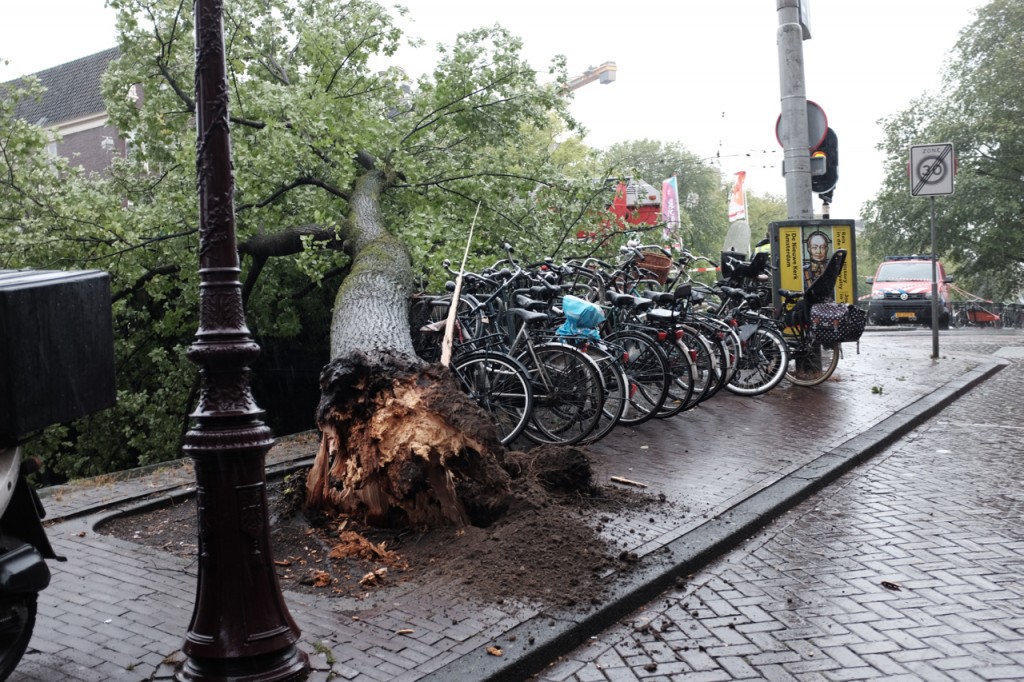 This big tree fell victim to the wind just as I walked past.

We spent hours on the town, but only snapped a few shots while out in the wet, windy weather. 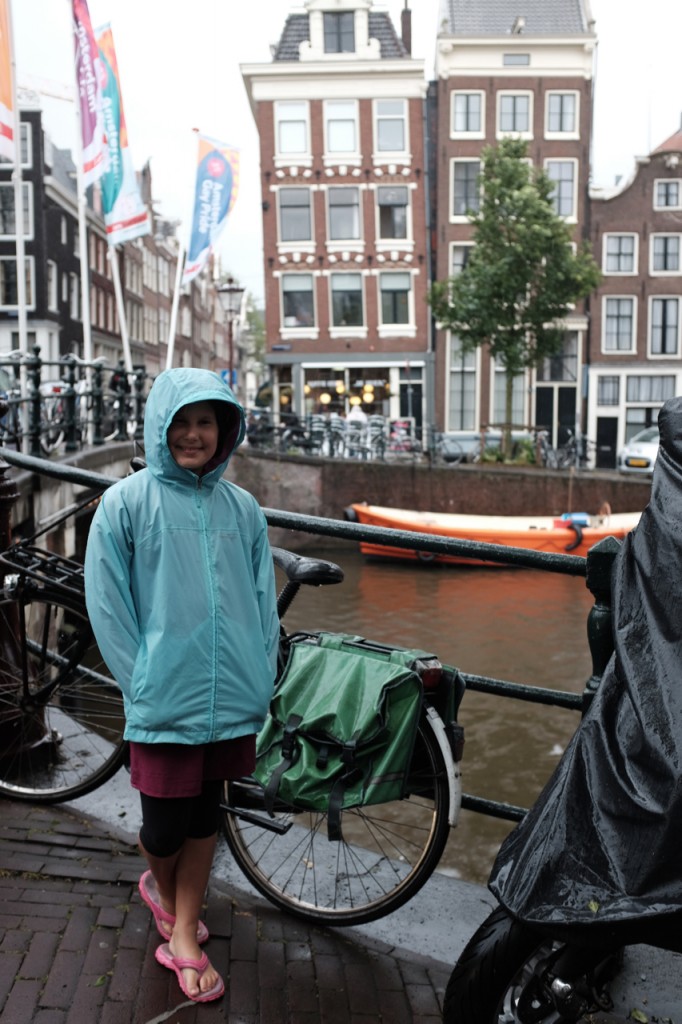 Have raincoat, will travel. Notice how much the old building in the background is leaning!

We took a quick coffee break to warm up and dry off.

Because of the wind and downed trees, the trams weren’t running, so we started the long walk towards home. We stopped for frites along Damrak. That’s OK for dinner on your birthday, right?! 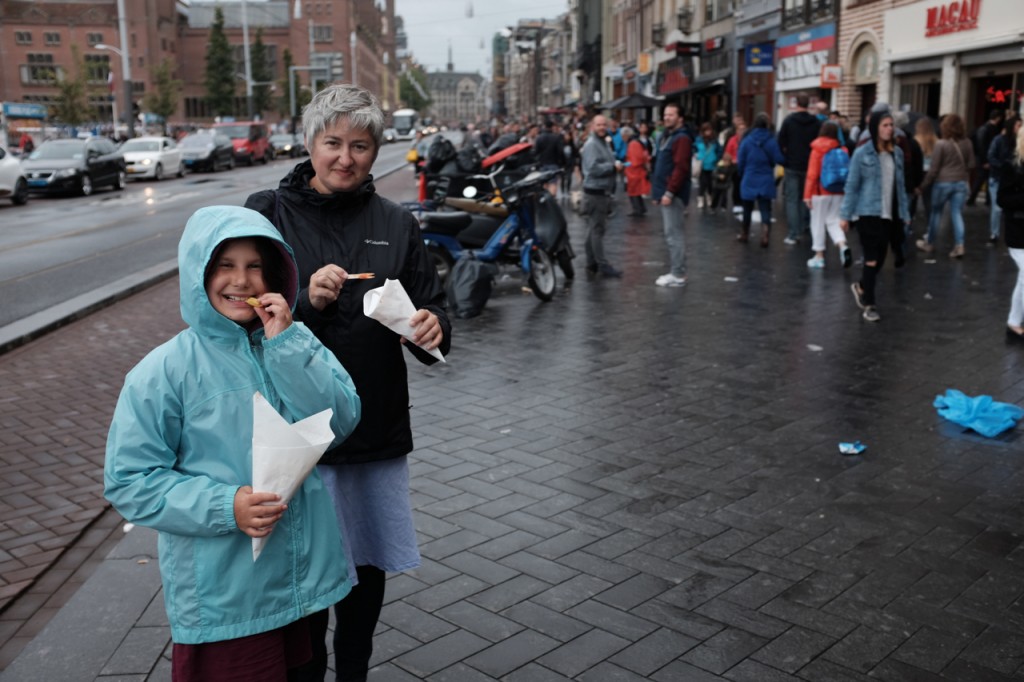 Frites in the rain. (Frites are pomme frites, french fries, or freedom fries depending on your dialect 🙂

We realized that the busses were running, so we walked up to Prins Hendrikkade and found one of the stops for Bus 22. This is what it looked like: 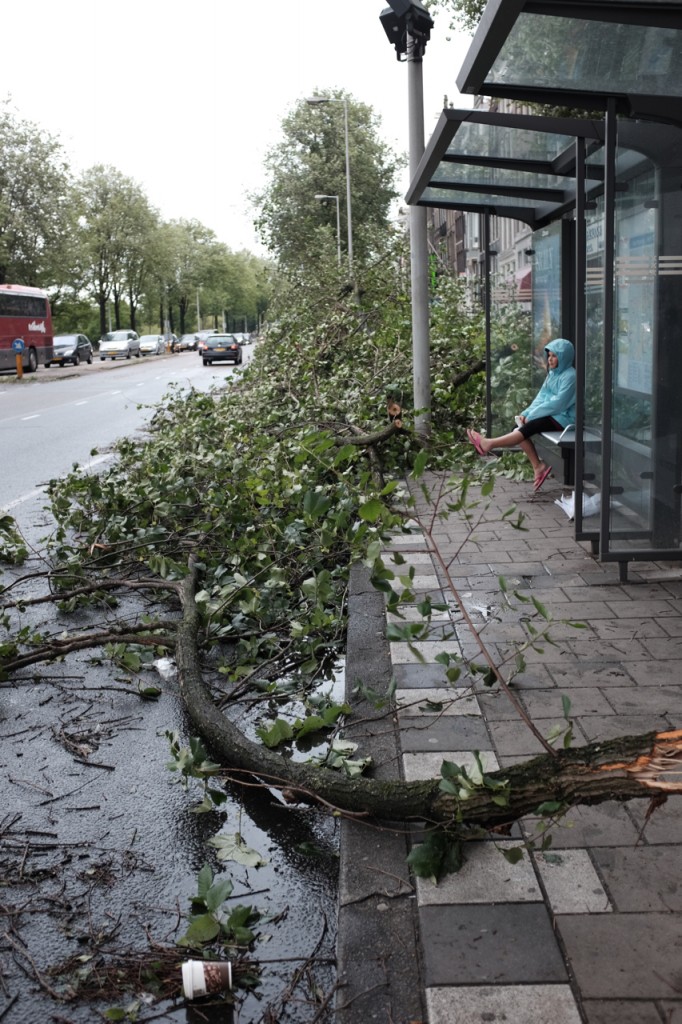 Another downed tree at the bus stop.

Back at our apartment, none of the trees had fallen, but there were small branches and leaves everywhere. 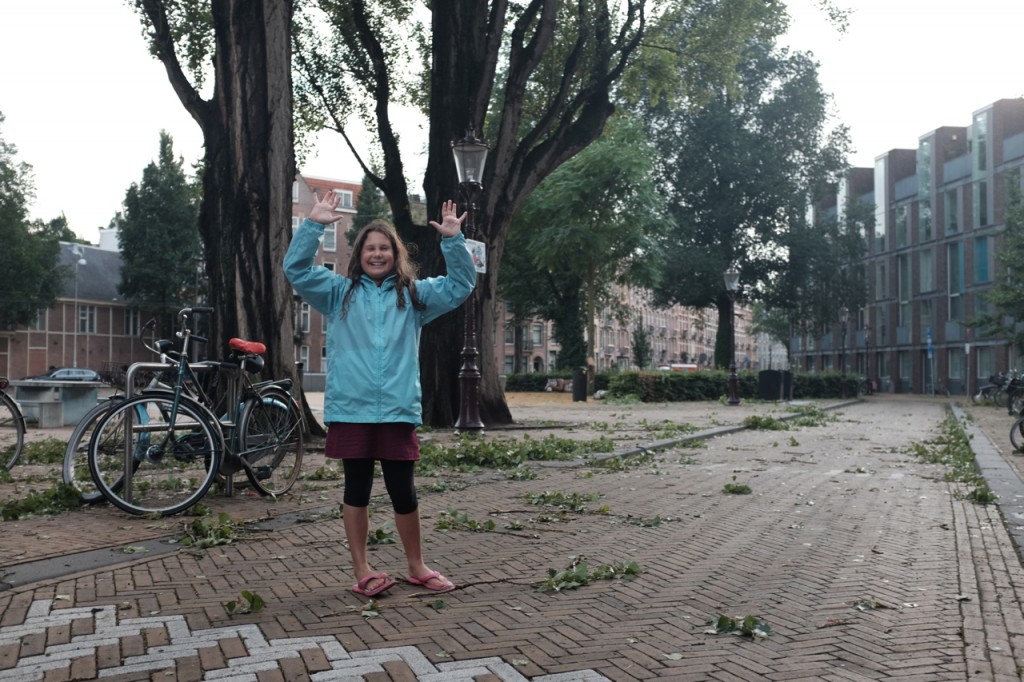 Lots of leaves and branches on the ground from the storm.

We saw the news online and learned that this was the worst July storm in recorded history for Amsterdam. Here’s how a Reuters news story described the day:

One person was killed as the most severe July storm ever recorded in the Netherlands swept across the country on Saturday, delaying flights and disrupting road and rail traffic.

Dozens of flights were delayed at Amsterdam’s Schiphol Airport and authorities warned traveler’s not to take to the road as gale-force winds and rain lashed the country, prompting the meteorological service to issue a “Code Red” warning.

No trains were running at Amsterdam Central Station, and trams were halted across the city. Roads were blocked by fallen trees in many places around the low-lying country.

A motorist was killed in the eastern province of Gelderland when a tree fell on his car, and there were reports of people being injured in several cities.

With gusts of up to 121 kmh in coastal regions, it was the most violent July storm in the Netherlands since records began in 1901.

By the time we got home the skies had cleared and the wind was dying down. Somehow we still had energy for the playground at the park our apartment faces. 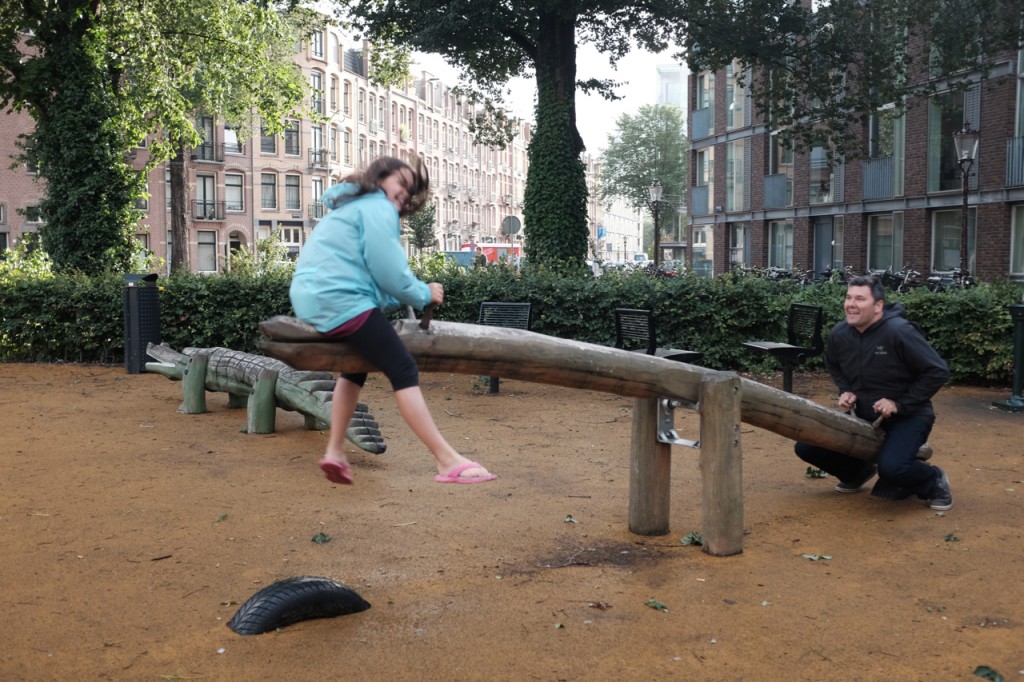 We also realized that Jette hadn’t made a wish and blown out candles. It was already 8 p.m. so a cake was out the question, but there was that new little ice cream shop in the neighborhood… 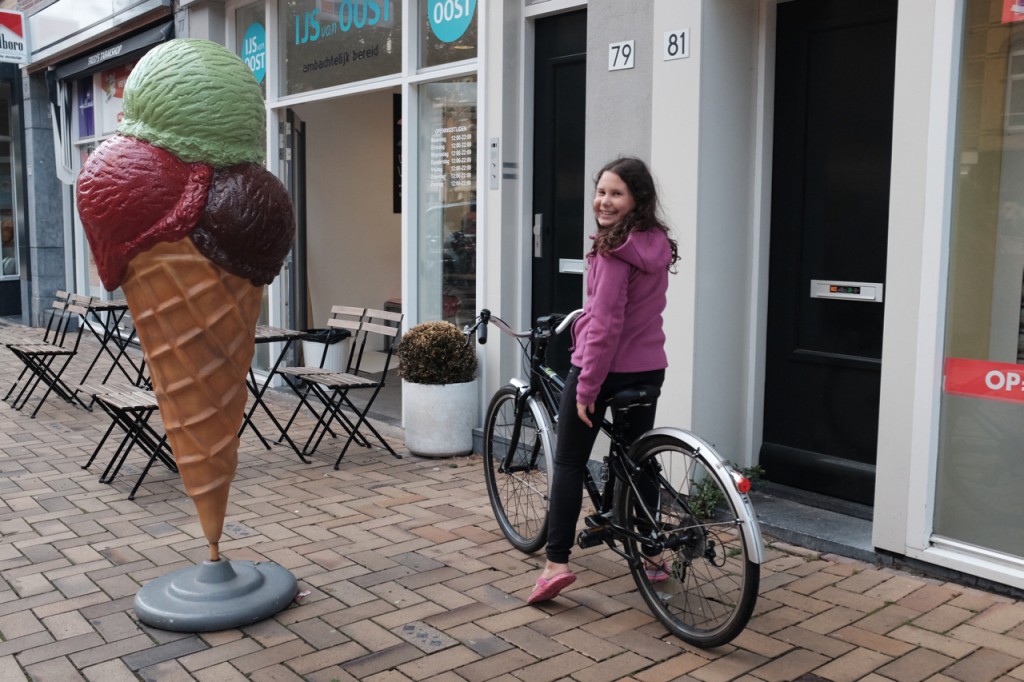 Bike and ice cream. What could be better? 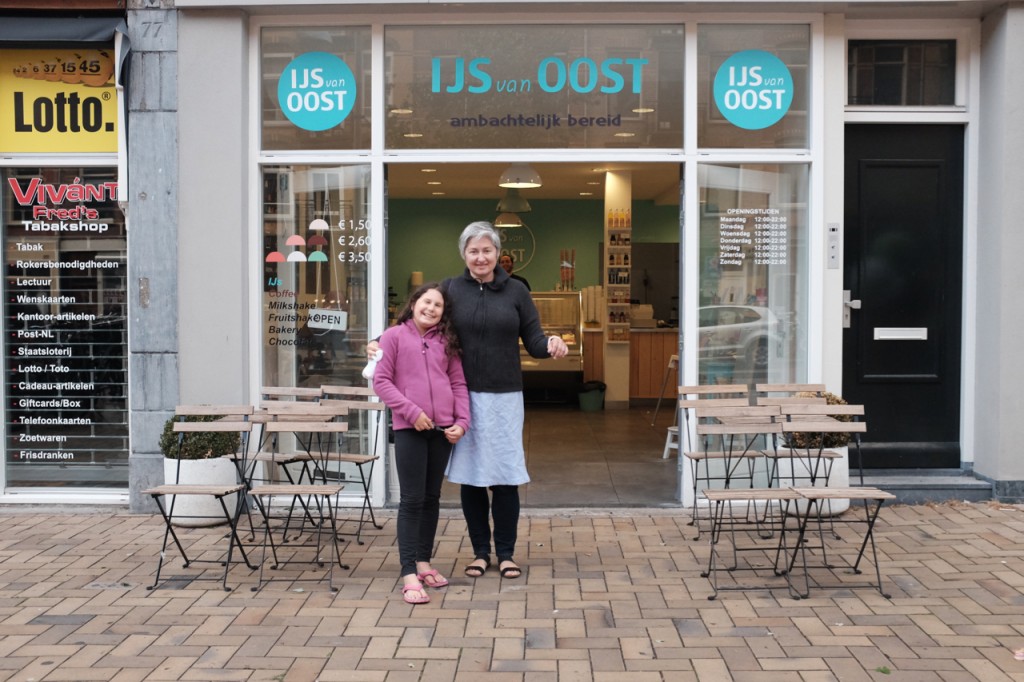 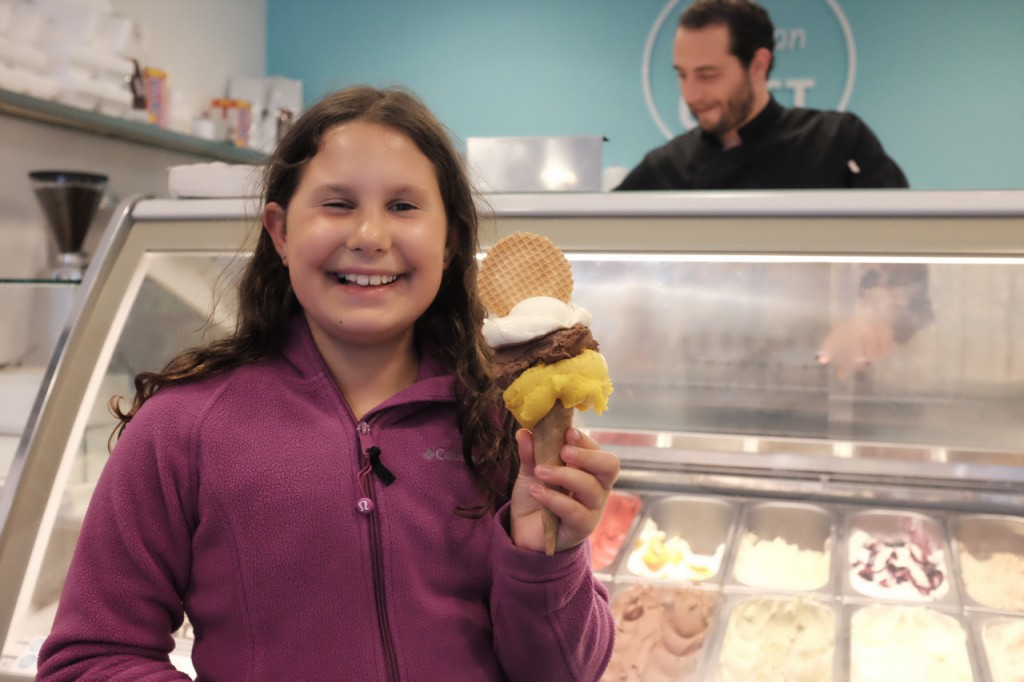 The nice man behind the counter gave a TRIPLE scoop when he heard it was Jette’s birthday. 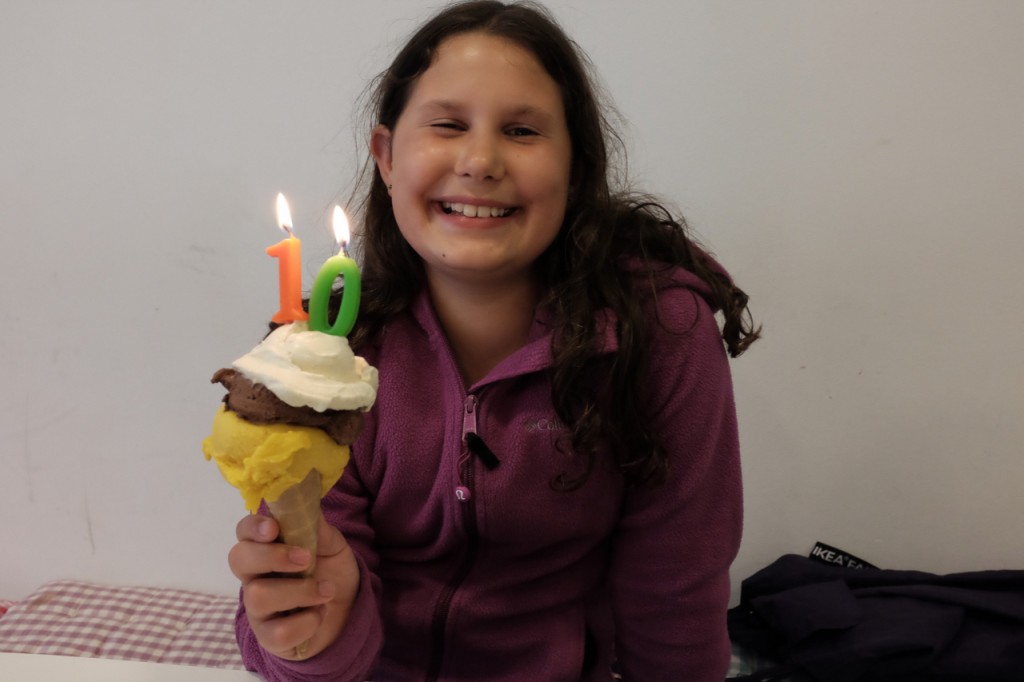 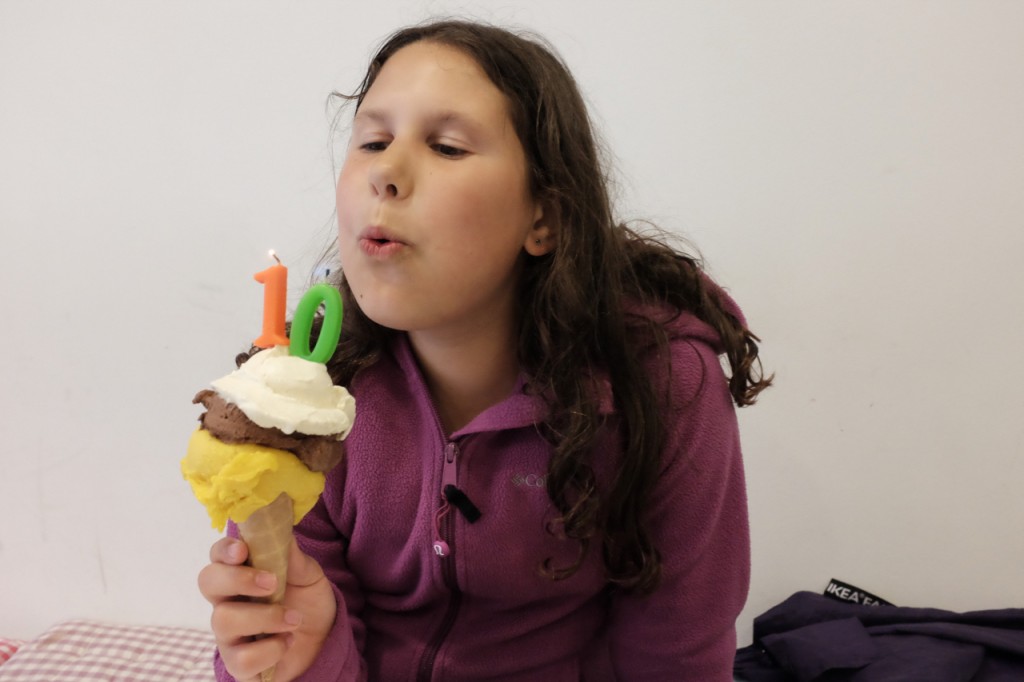 Here’s to hoping all our wishes come true.

After the birthday ice cream, it was back home, with a half-hour stop at the park to get in a little gymnastics. 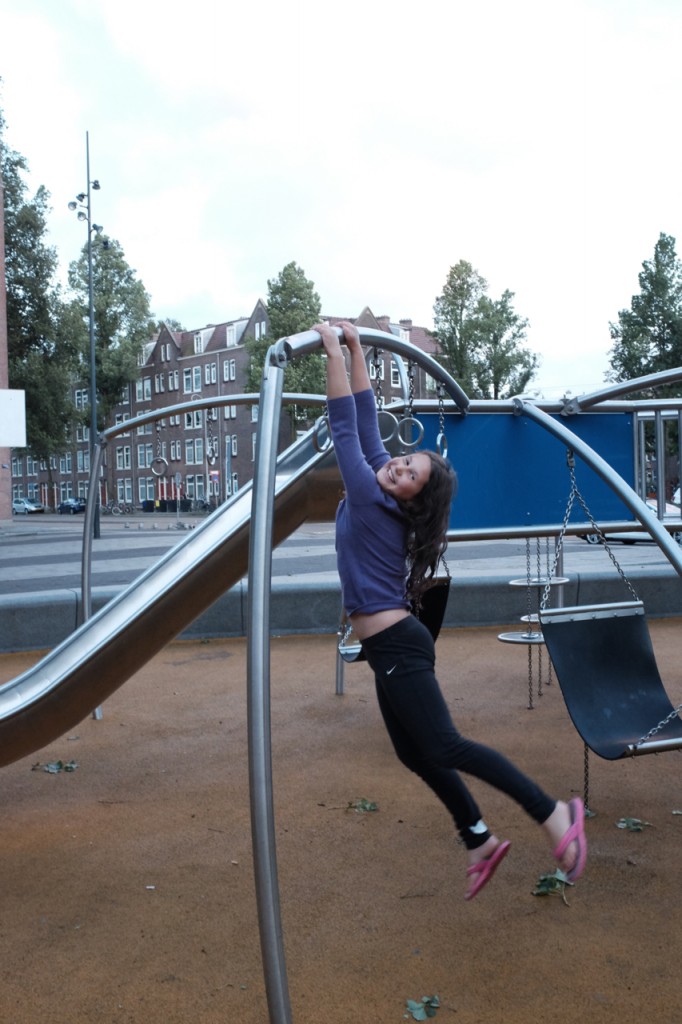 A gymnast at heart. 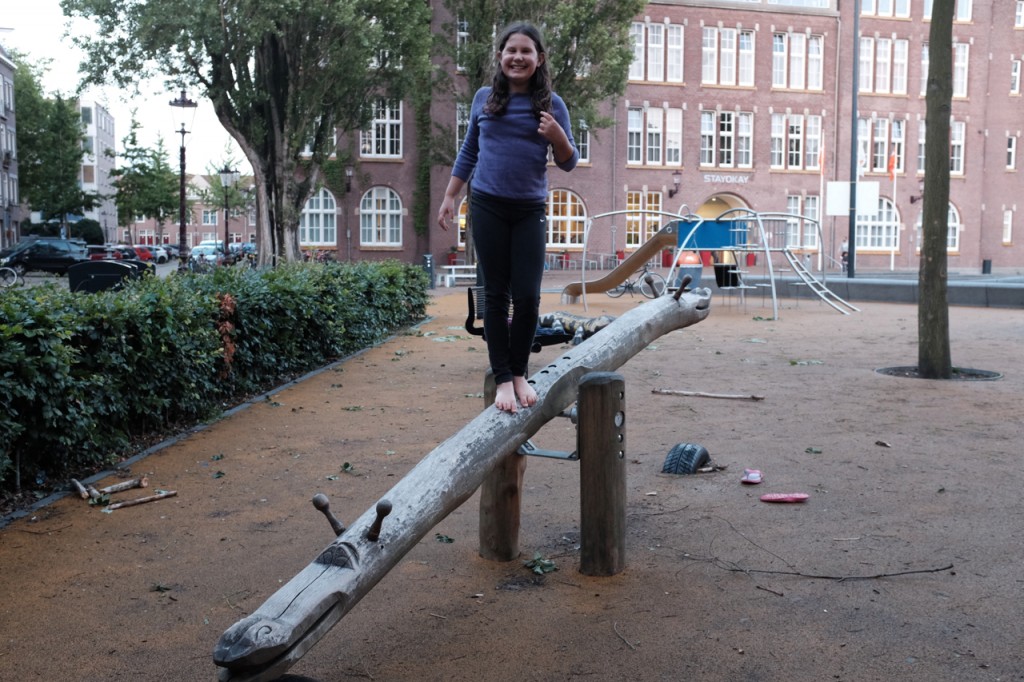