Have you ever been sitting in a movie theater on the 4th floor of a giant shopping mall and felt the whole building shake? We hadn’t either, until tonight!

We went to the 6:20 feature of The Jungle Book at the Victoria Mall in Pereira, Colombia. About 30 minutes into the movie we felt the whole building shake. It was a weird sliding motion, not too extreme, but enough to really feel. At first I think we all thought it was an effect or trick of the senses from the 3D movie. When we realized that the whole building was moving, we got up and headed straight for the emergency exit.

About a quarter of the theater had the same idea, but people were so casual about the whole thing it was weird and frightening. They were moving very, very slowly, many of them just standing around in the stairwell and blocking the exits. As we were making our way out of the theater the lights came on. No one was panicked and people didn’t even seem to be talking about it. There were no announcements and no visible security or direction from staff. We got out of the theater and into the main part of the mall. There it was as if nothing had happened. Nonetheless, we got down to the ground level as quickly as we could and went outside, straight to the middle of a large plaza on one side of the mall. We wanted to be somewhere safe if another, stronger shock hit and buildings collapsed.

No one else seemed the least bit concerned, or seemed to be doing anything at all. Apparently we were overreacting by local standards. Hey, better safe than sorry as far as I’m concerned! How could we know if that was it or just a small tremor kicking off a much bigger series of shocks?! 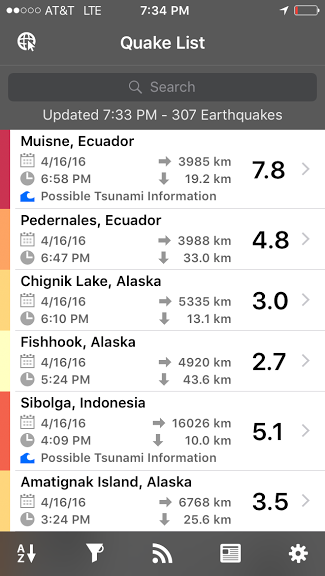 Once again, our superfriend Anita gave us instant access to global quake data!

Apparently what we felt were shocks from a 7.8 earthquake centered in Ecuador. The news is currently reporting 28 dead there and a tsunami warning. This is what it looked like in Ecuador:

We’re getting ready for bed, and while it seems highly unlikely that we’ll have a dangerous quake here, we have an exit plan worked out should we be surprised with another set of tremors overnight. Sweet dreams!