It’s eerie to consider that we were just in Sumatra mere weeks ago and just days ago, a significant 7.9 earthquake hit southwest of the island. We consider ourselves lucky to have gotten the chance to visit such an incredible place yet miss the turbulence that comes with living there.

Indonesia is a country composed of fourteen THOUSAND islands, six THOUSAND of which are inhabited; we visited ONE, Sumatra. 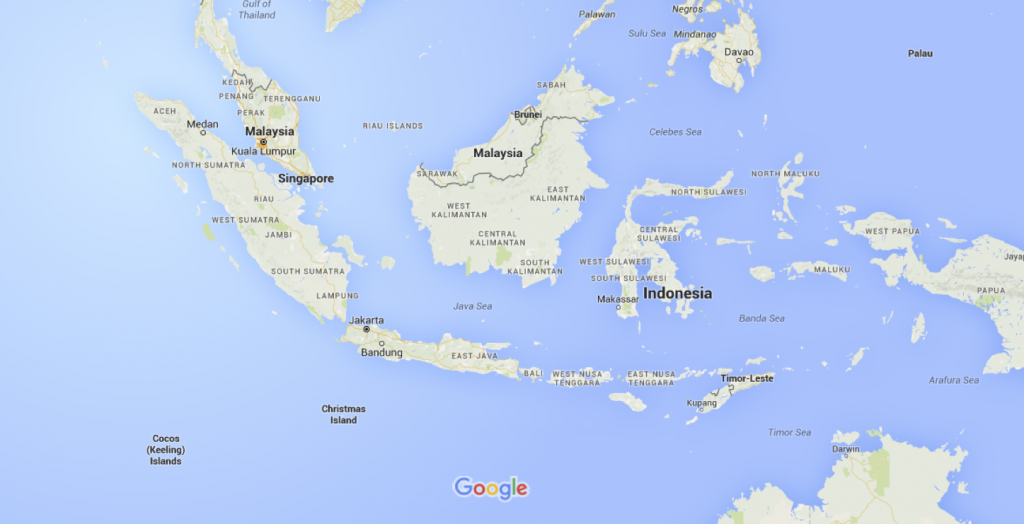 Our first and last stop in Sumatra was Medan. We flew into Medan from Penang, Malaysia. We also flew out of Medan on our way back to Kuala Lumpur, Malaysia before flying on to Sri Lanka. For a city that is typically used as a transit hub, atypically, we spent a combined four days here and discovered a few of the city’s charms. Our travels through Indonesia went something like this:

Medan is the fifth largest city in the country and is the largest city after Jakarta, Surabaya, Bandung, and Bekasi, all of which are on the island of Java.

Our plane trip from Penang was short and easy and we arrived in the early evening, right around sunset. We spent a significant bit of time inside the airport trying to find a SIM card, while politely avoiding large numbers of overpriced taxi touts. Once we had our SIM card purchased and installed, we were able to locate our destination on Google Maps. We’ve found this simple measure incredibly useful on more than one occasion. If a taxi driver has never heard of the particular guesthouse where we are staying, we can show him a dropped pin on a Google map. If that fails, having internet is useful to pull up our hosts’ phone number. We can then just hand the phone to the driver to discuss directions in the local language. Sounds simple enough, but with thirteen countries travelled so far, keeping track of all those tiny SIM cards and communicating our needs upon arrival in each new country is a step that takes a bit of time and some effort, but has always cut down on that slightly disorienting, slightly overwhelming feeling of being in a completely new place on this planet every few weeks.

Medan was a bit of a shock to our systems after the loveliness, charm and relatively high level of modern development of Penang. Our guesthouse was in a residential neighborhood about 45 minutes from the airport and most of that time was spent driving through dimly lit residential neighborhoods. Indonesian drivers are notoriously wild and reckless, weaving in and out of the suggested street lane markings into oncoming traffic. Somehow, though, we lucked into the slowest driver in Medan. His caution and slow speed may have caused all of the other drivers around us to look all the more insane.

There was quite a bit of homogeneity between the neighborhoods that we drove past in that they all seemed to be lively, late in the evening, full of smiling children running around, having what appeared to be a great time. There was, of course, a cacophony of motorcycle and car horns blasting away constantly for no apparent reason.

There were dozens of street vendors, most of whom were selling ayam goreng (fried chicken) and many others with independent petrol stations. It appeared that in order to be a licensed petrol dealer, one must first locate a dozen plastic, empty 1.5 liter water bottles and refill them with 1 liter of petrol. Once the bottles are placed across a small table, shelving unit, chair or any other somewhat stable surface for display, business is officially open. With every sort of gas-powered vehicle whizzing by, the stations were definitely a necessity, but there was a disorienting sense of redundant commerce; the stations were sometimes right next to each other, often across the road from each other and just here, there and everywhere. It seemed like a very popular business with low barriers to entry, low overhead, low spoilage and questionable margins.

The quality of housing and overall infrastructure, upon first glance, appeared devastatingly low. Knowing that Indonesia is a wealthy country with a significant level of profit from many industries, with the largest economy in Southeast Asia, I was quite shocked to observe the low level of road construction, garbage everywhere and general lack of solid infrastructure that I had assumed would be there based upon the country’s wealth. We drove for some time through quite similar neighborhoods until we arrived at our guesthouse, K77. We were greeted warmly by Lola, the wife in the husband/wife team who own and operate the guesthouse, but before we went inside, a little group of neighborhood kids came running up to us and some of the tiniest ones came running up to Jette and took her hand to their foreheads, a custom called “salim” which indicates respect in their social structure and hierarchy. As westerners, we are uncomfortable with outright hierarchical statements and physical acts that are representative of societal position, but in Indonesian society, hierarchical relationships are respected, emphasized and maintained, so we felt the need to go along with local customs.

We wrapped up our hellos and came in to see that our host had brought out a tray of juice and a delicious snack of sweet sticky rice lopis for us. They were sooooo good and our first time trying them. They were our first introduction to Indonesian sweets, but wouldn’t be our last; we were to discover that Medan is known for tasty cakes.

We took our bags upstairs, got cleaned up and stepped out to search for a quite bite of dinner. The street in front of K77 is quite narrow, with most of the street-facing buildings being either one or two stories. Going out on foot brought us a lot of attention. We spent a few minutes sharing smiles, then walked along to find some dinner. 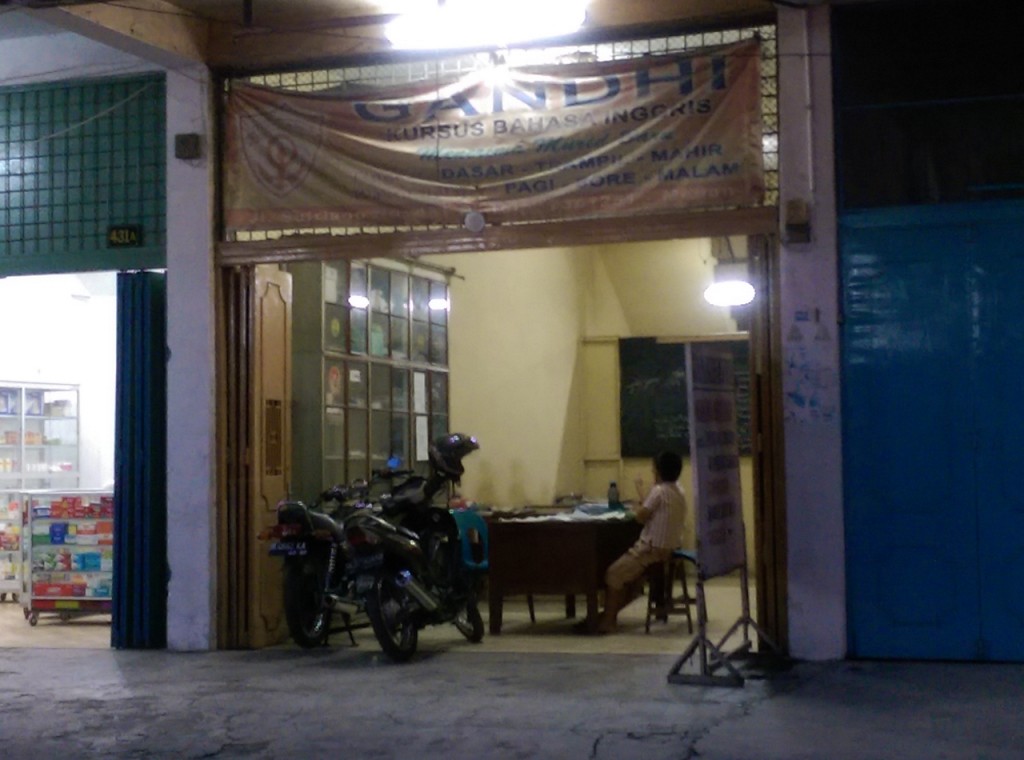 Local business? homework spot? motorcycle parking spaces? all of the above? 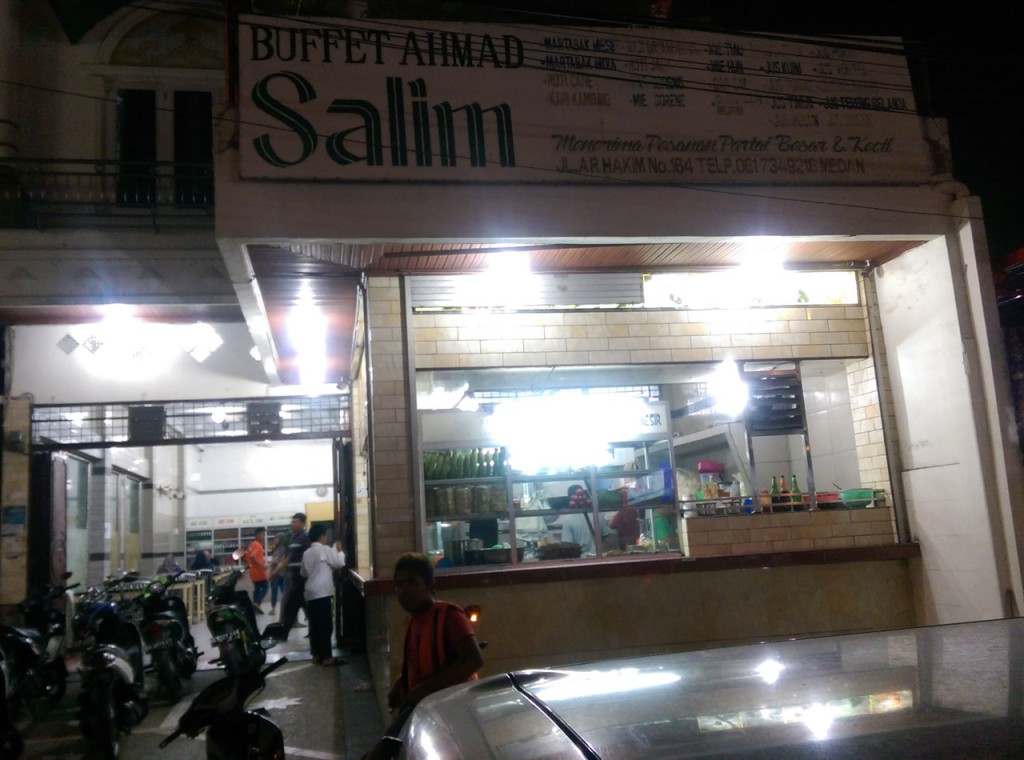 We walked the wild streets of Medan for a bit, dodging traffic with every step across broken concrete rubble bits as we tried to find a place to sit and have a meal. While we explored, we ran into a young Chinese man who was also staying at K77 and we ventured around for a bit together. After an intense, life-risking street crossing, where we all ran across and teetered on a crumbling median, cars and motor scooters zig-zagging and whizzing by without slowing down, we saw a small restaurant that looked reasonably busy (always a good sign) and clean (another positive trait). We ordered with the help of Waco’s rusty Bahasa language skills and ended up having a delicious dinner. Pretty much everyone in the restaurant stared at us throughout our entire meal; we had so many pairs of eyes on us, we could only laugh. After having been in Penang, home to thousands of expats, we had gotten used to feeling like we were just one of many, and not too special. Indonesia was going to be different, very different. Our first hours here were shaping up to frame our entire visit to the country; Sumatran tourism has slowed to a trickle and people were intrigued by us. Some were so excited to meet us, they made us feel like celebrities, asking for our photos. 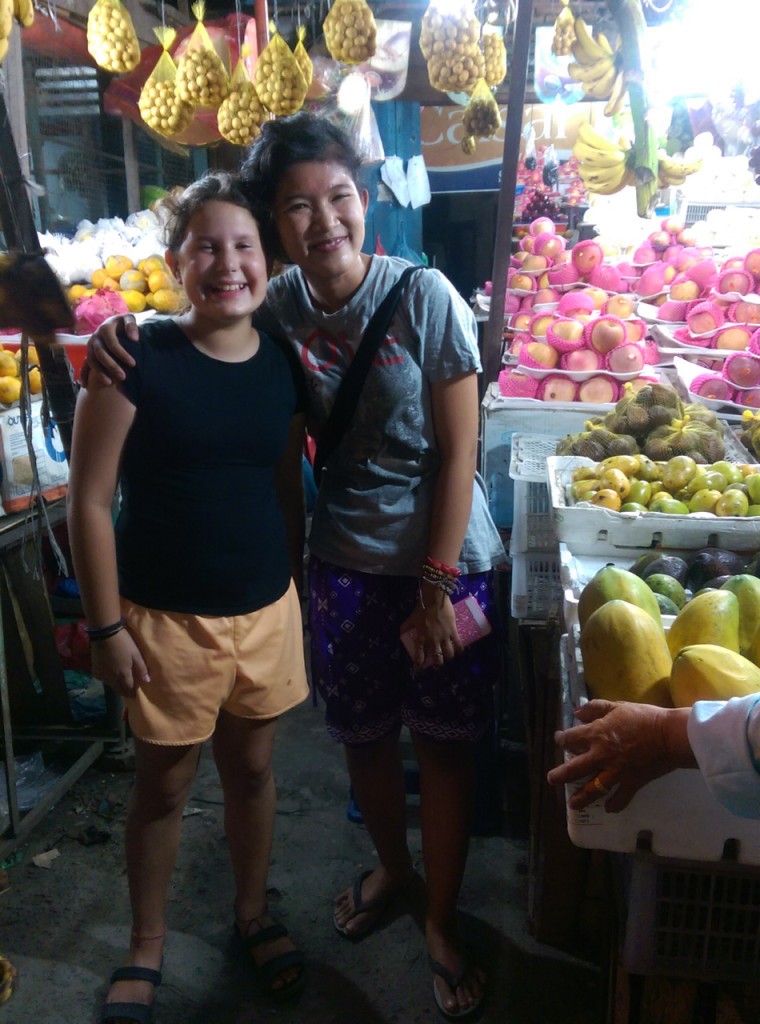 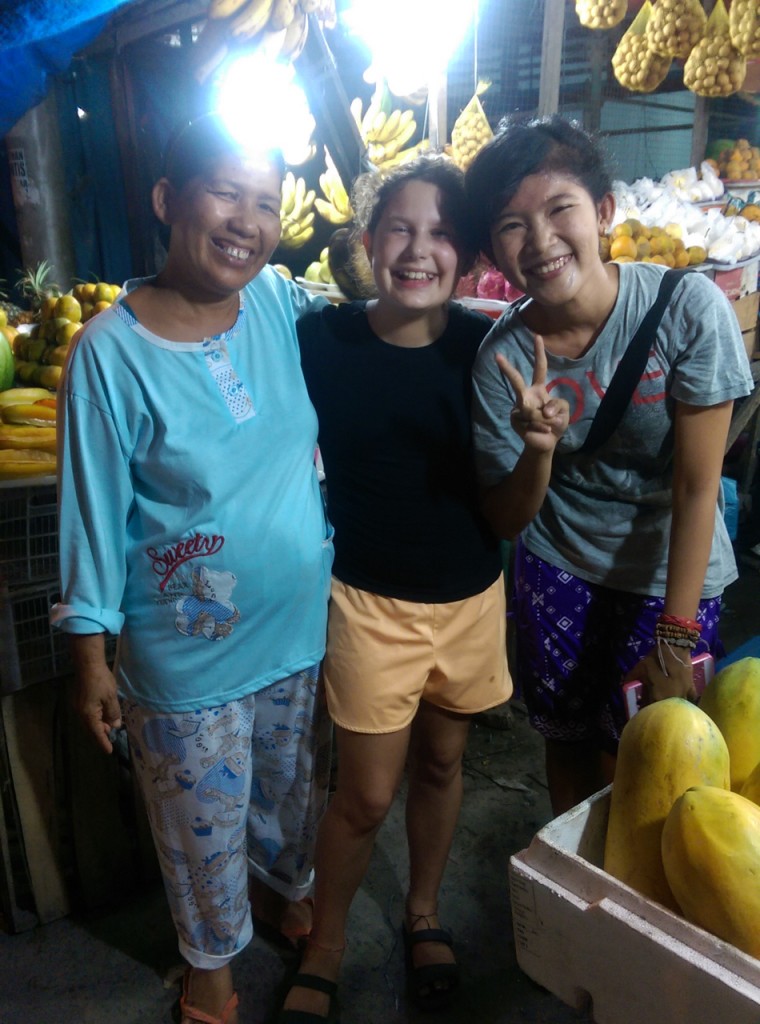 Here she is with mom, who asked for photos

The next morning, we set out in vain to find a laundry facility that could clean our growing bag of unwearable clothes in time for our departure the following day. We walked and explored, assuming that we would find a place easily, as we had in so many other cities and countries before. After walking in vain for nearly an hour, with extremely vague directions and “help” from some locals, we finally found a dry-cleaner. The clerk started to count our items and came to a pair of undies, at which point she put everything back into our bag and stated simply, “Oh, sorry, cannot”. We stood a bit dumbfounded, “Pardon”? She was quite apologetic, but their facility had a policy against cleaning undergarments. Well, there are three of us and half our laundry is underwear!

Tired, hot, and sweaty, we decided we’d spent enough time and energy on our laundry task of the day and proceeded onwards, by tuk-tuk, to some of Medan’s more interesting sights. We went straight to Tip-Top Cafe, a colonial-era relic of a restaurant that’s been around since 1934. The signage, covered patio and menu were a throwback to another time, which is always fun, but there was also an awkwardness to the experience. There were too many suited servers for the number of customers the cafe was serving. We ordered a few items and thought our meals were fine, but the formality of the service felt quite forced in a city like Medan. Tip-Top is a place where locals of questionable honor and shady expats come to rub elbows and “do business”, and spend more rupiah for one meal than the servers likely received for their week’s wages. We finished quickly and moved along. 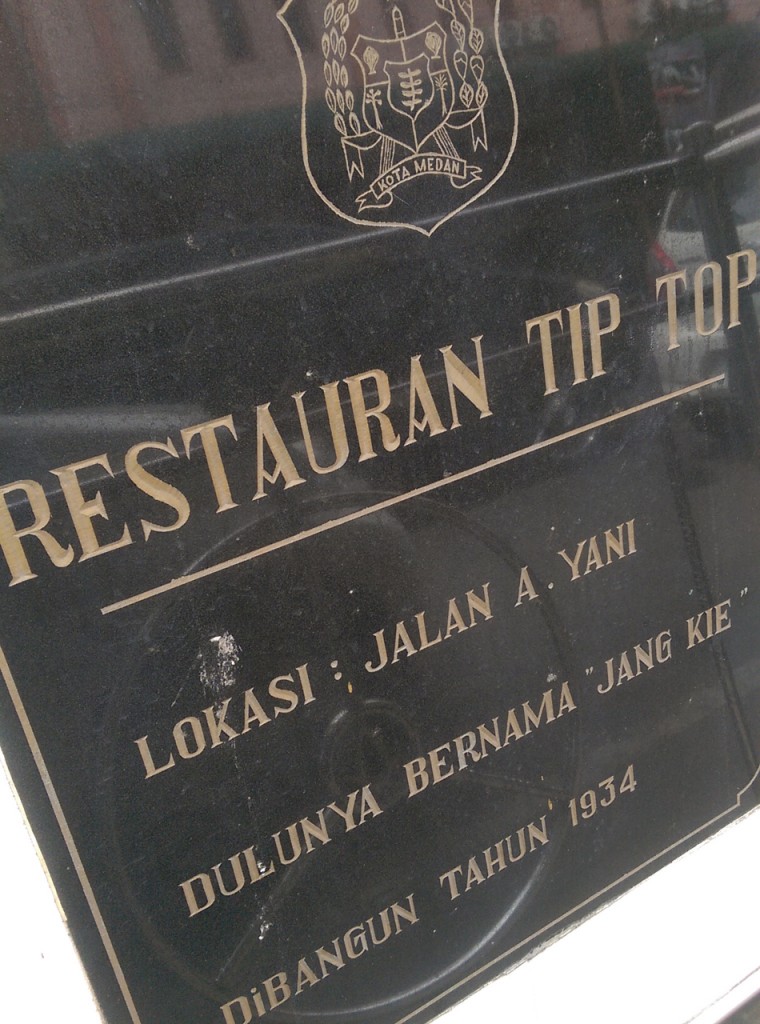 Amazing for this spot to have survived since 1934 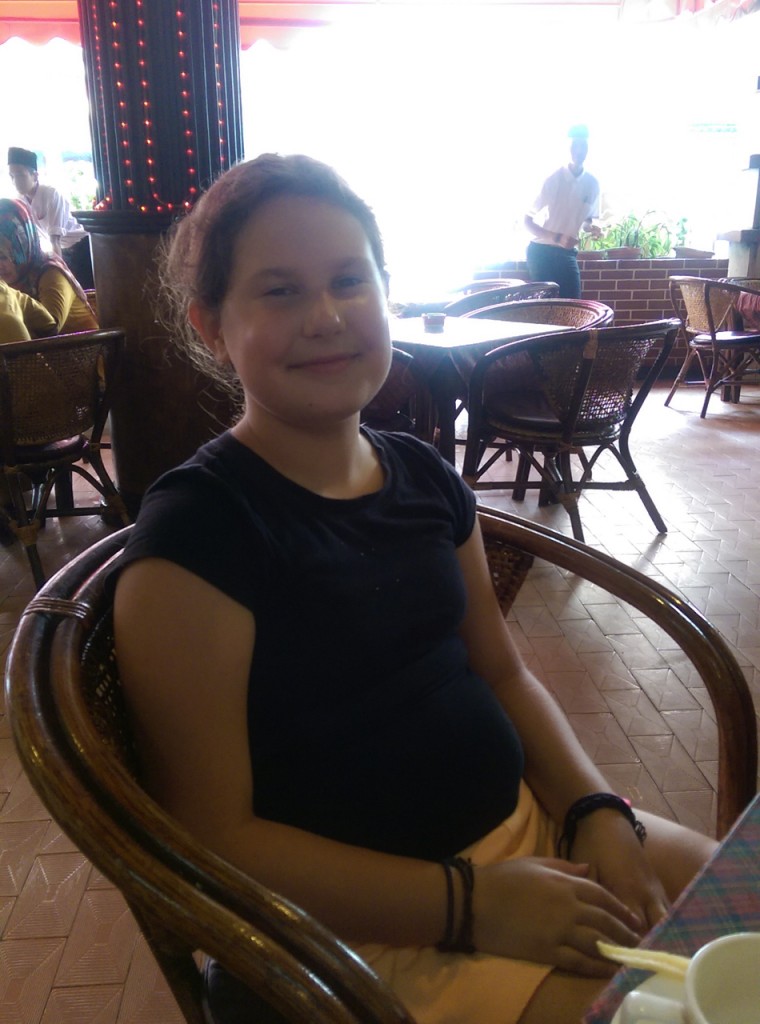 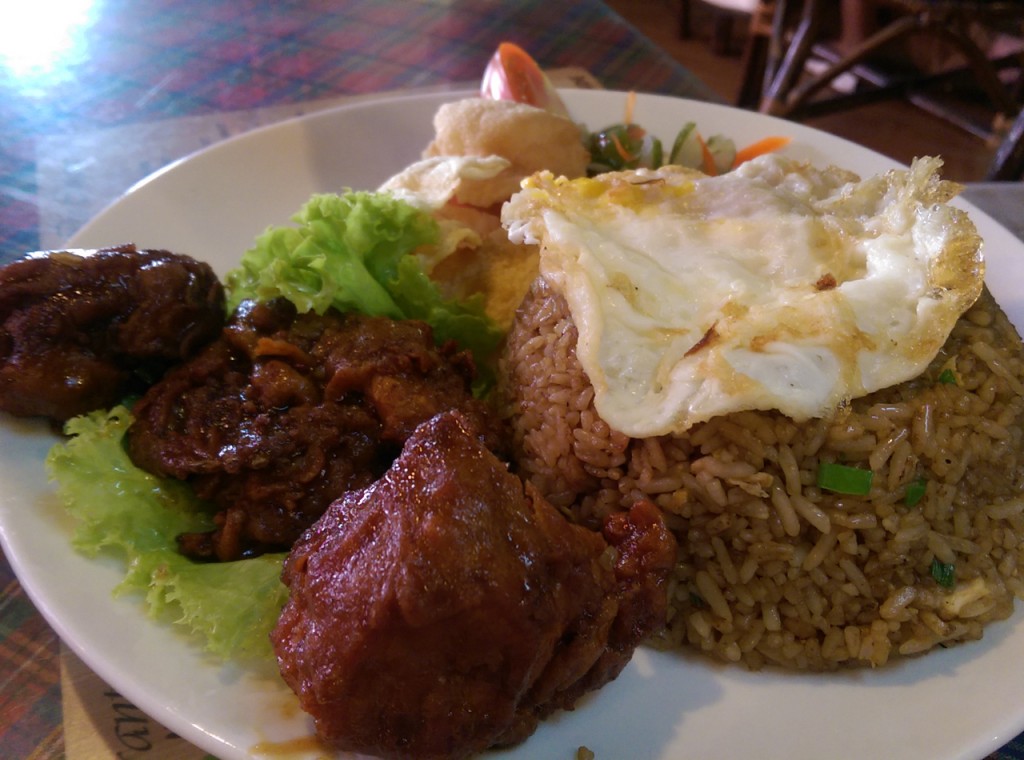 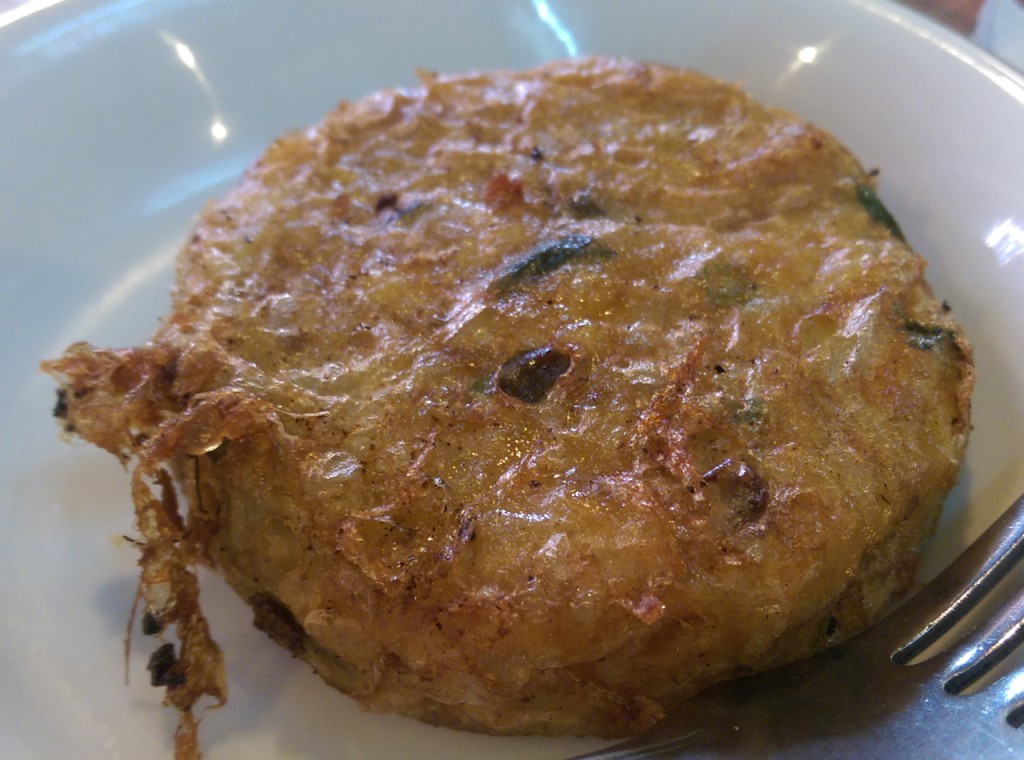 We ventured across the street, to the Tjong A Fie mansion after lunch. The historically significant Chinese, feng shui, turn-of-the-century mansion, turned out to be incredibly similar to the Cheong Fatt Tze Blue Mansion in Penang, that we had just seen days before. The buildings almost appeared to have used the exact same blueprints! Our excellent guide through the home revealed that the Indonesian was a nephew of the Malaysian magnate, which was fascinating and might explain the similarity of the two properties. The Indonesian tour allowed for more exploration within the property, which was really fun and sated our curiosity to see rooms that had been deemed “private” at the Blue Mansion in Penang. 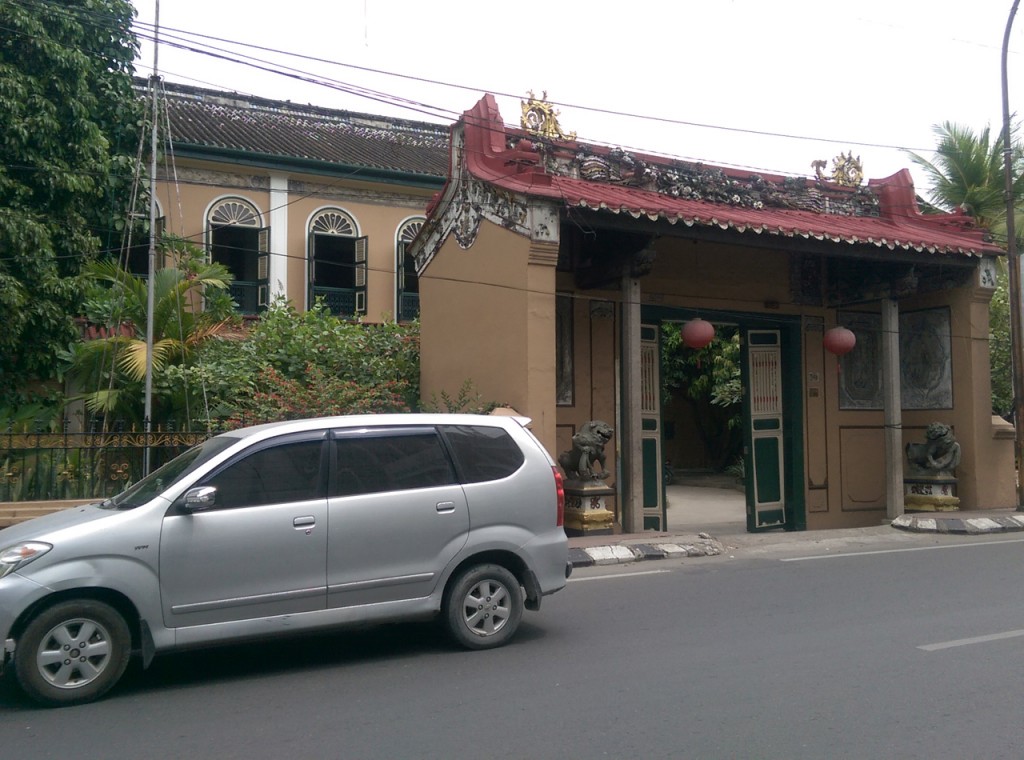 The entrance to the mansion is quite unassuming 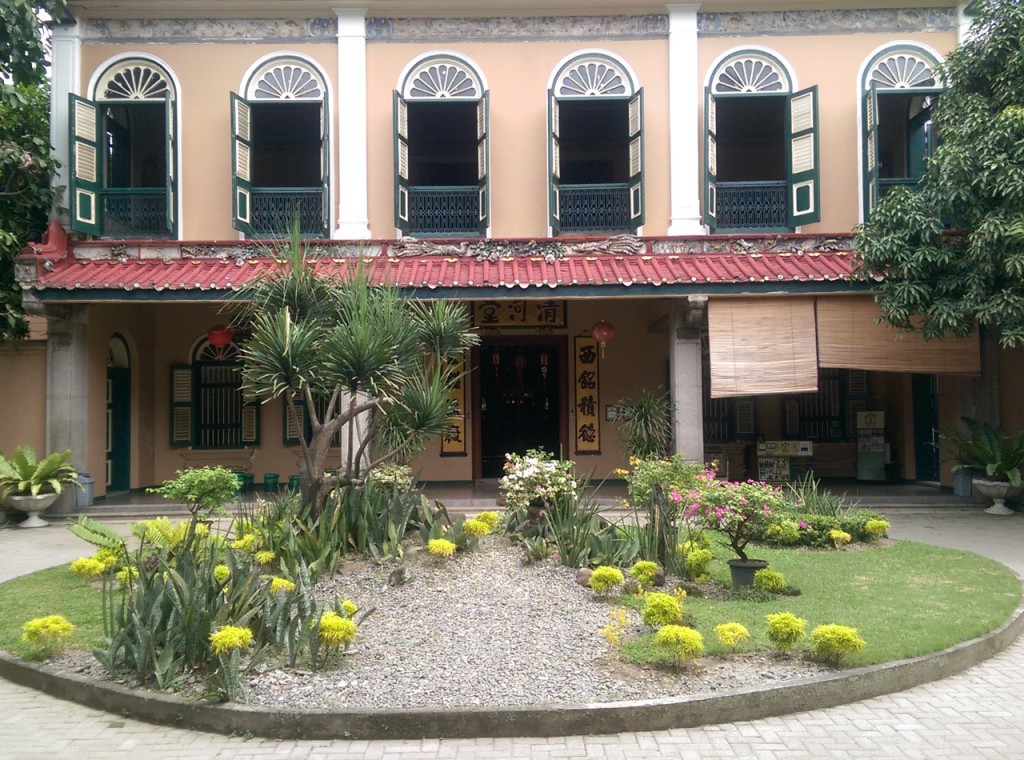 Greeted with a subtle garden just inside the gate 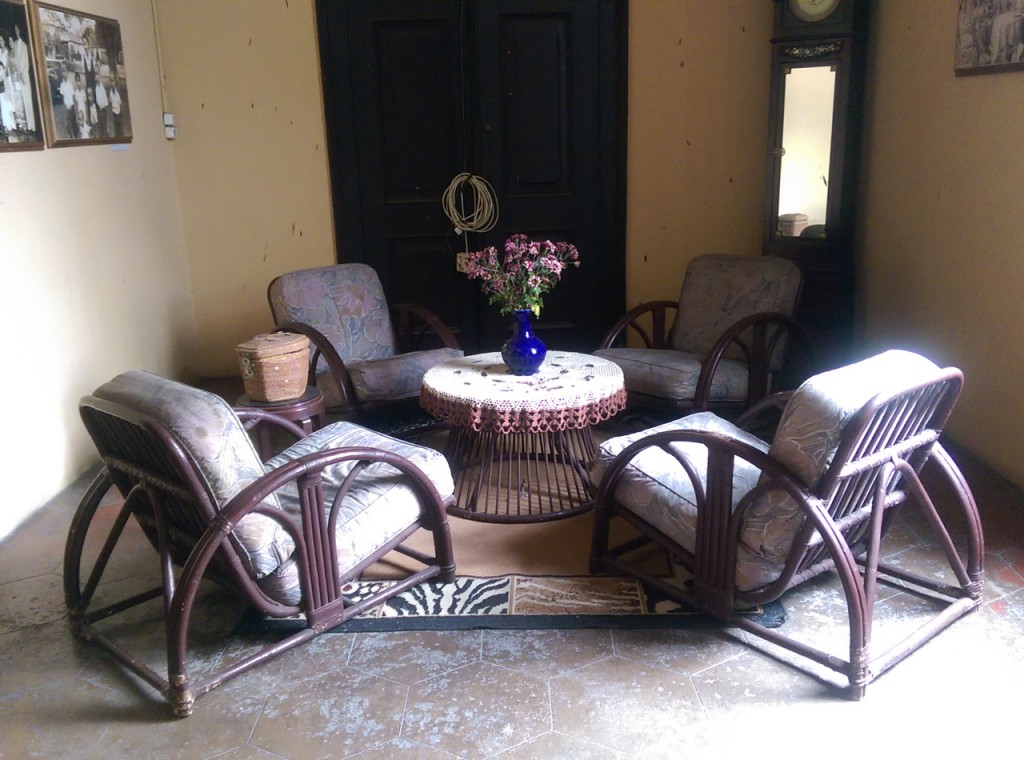 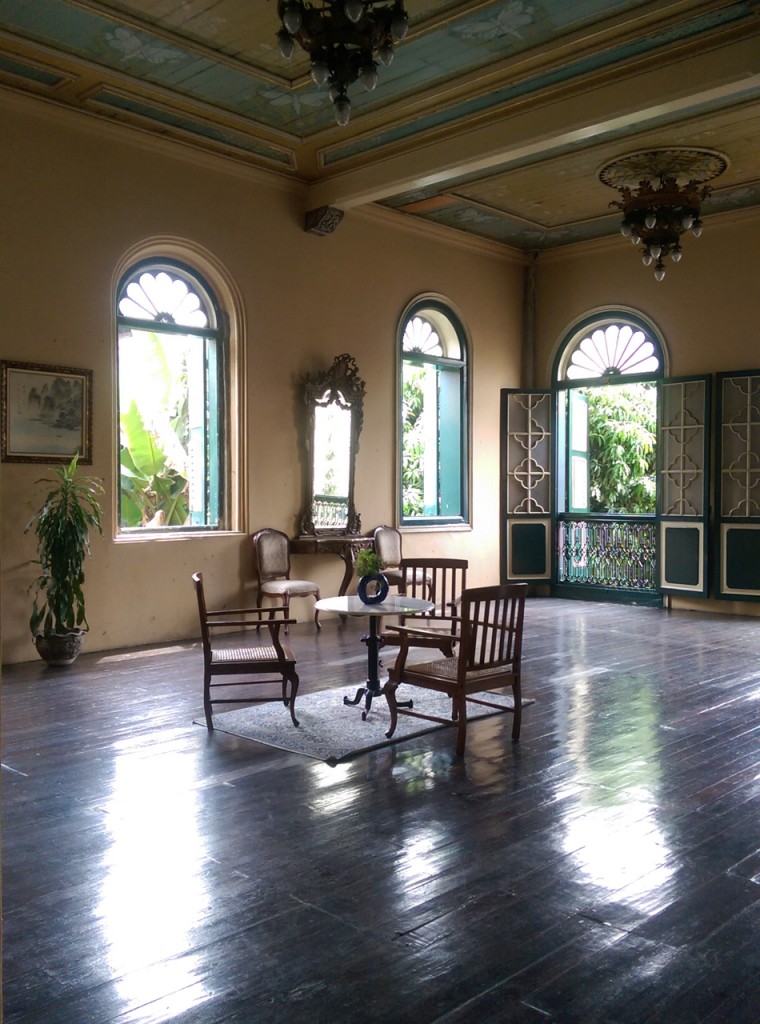 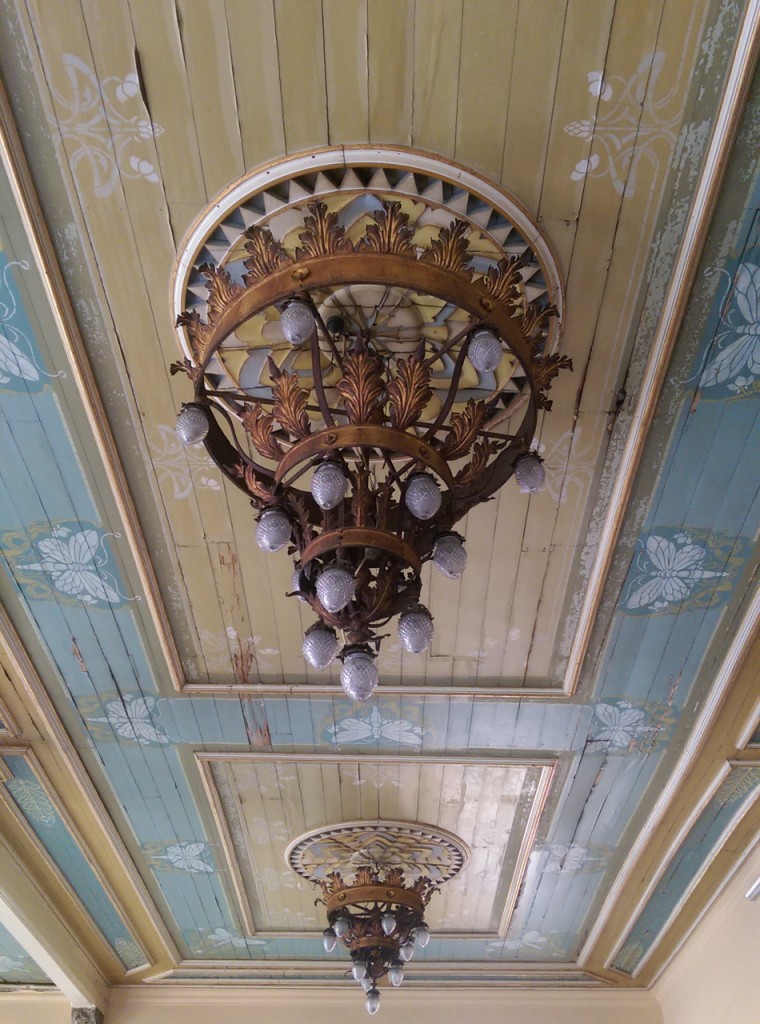 The detail on these ceilings was incredible 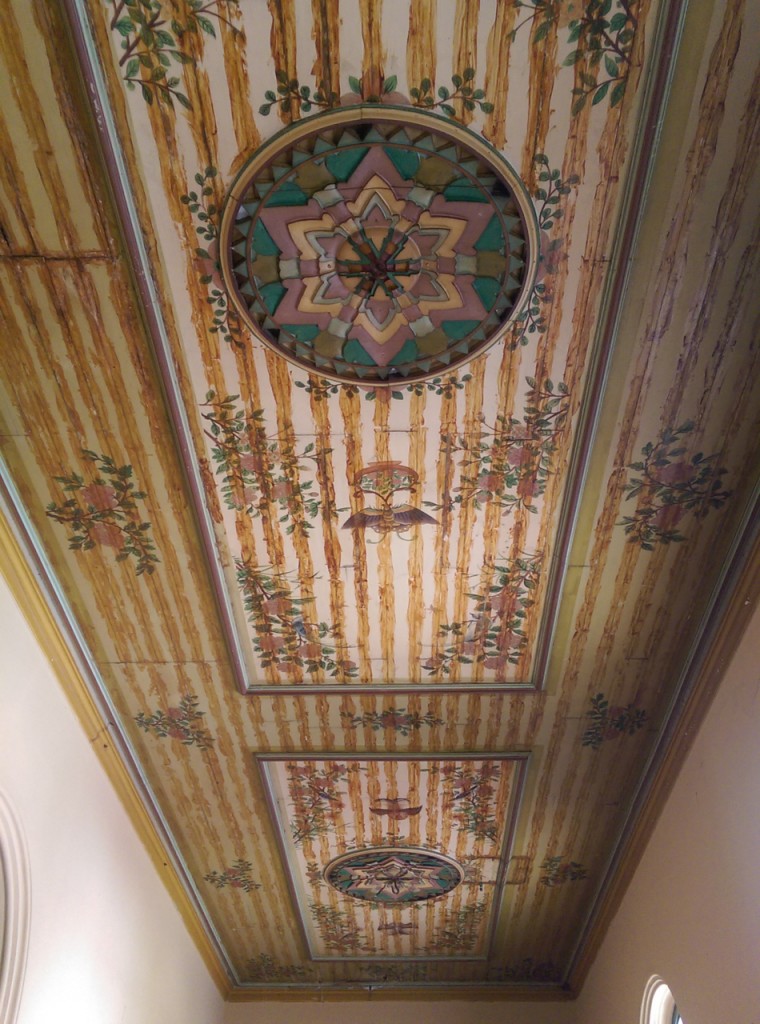 Slightly crumbling, but so detailed 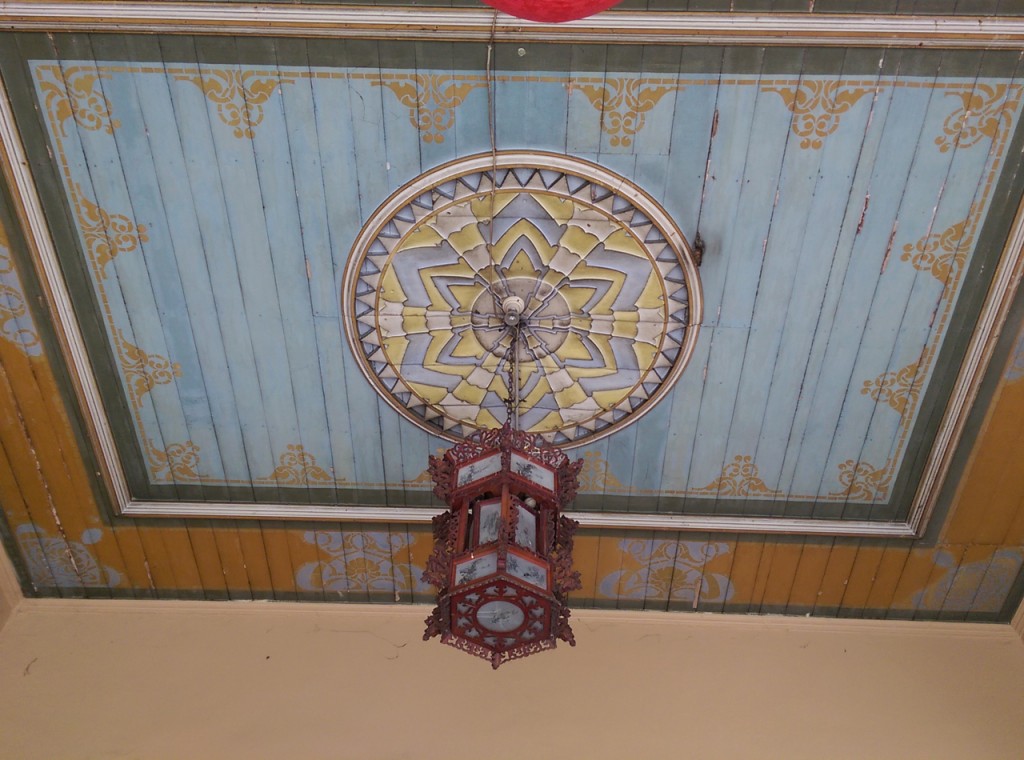 This one was outside under the porch 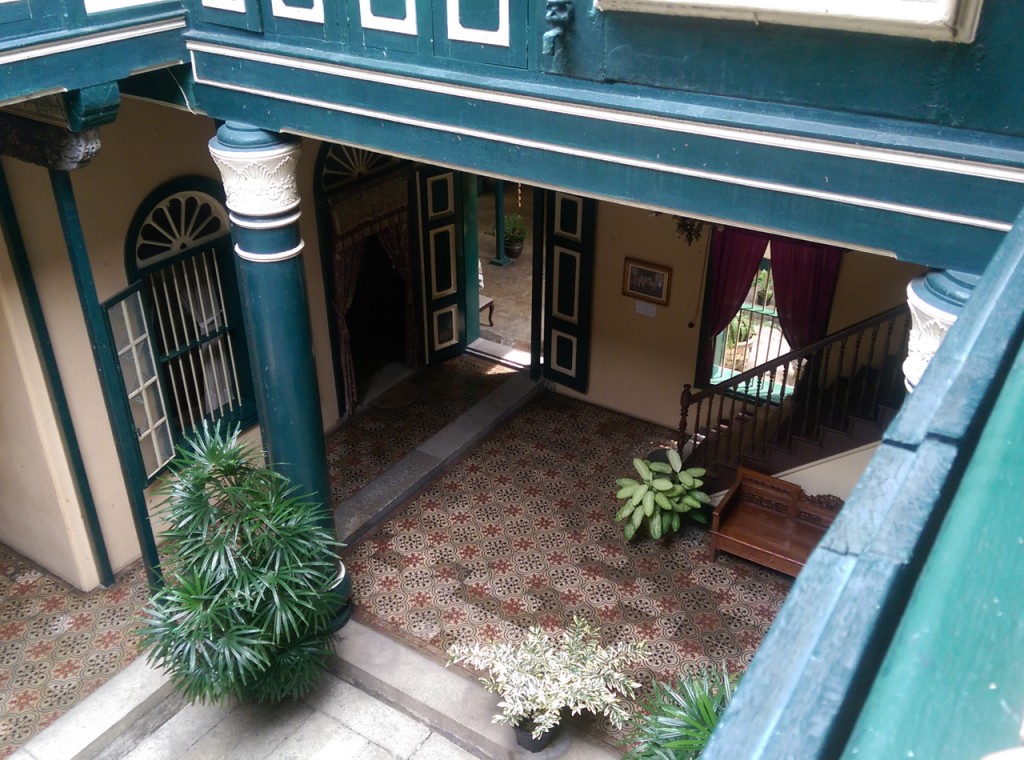 The interior spaces are completely open to the exterior 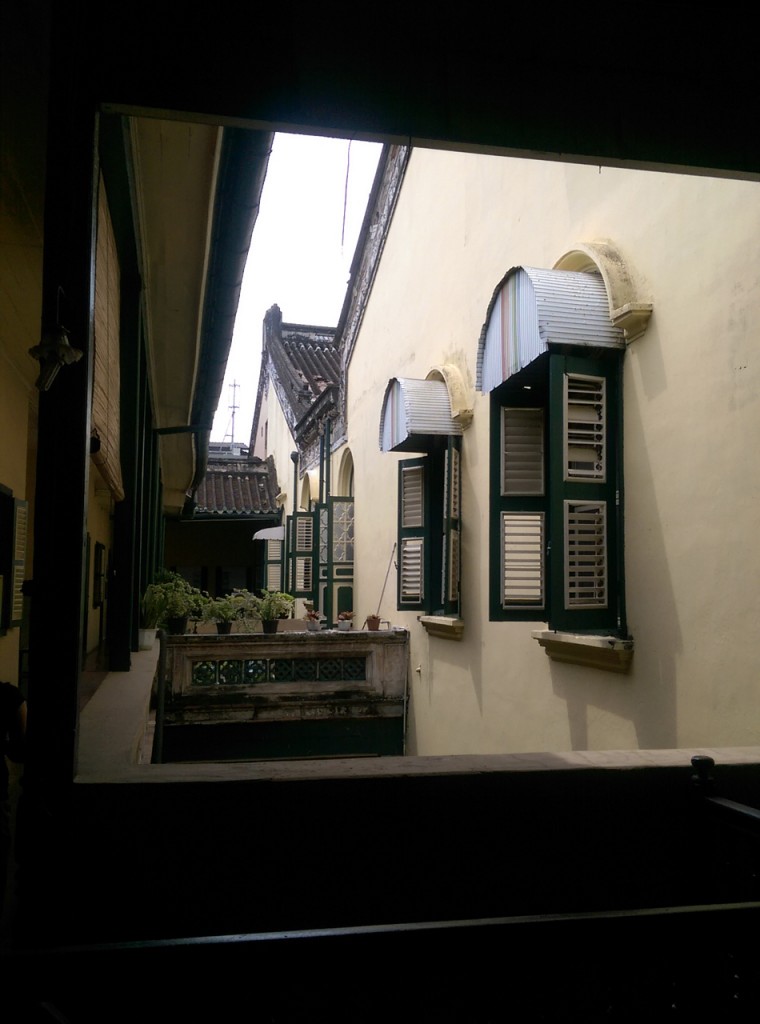 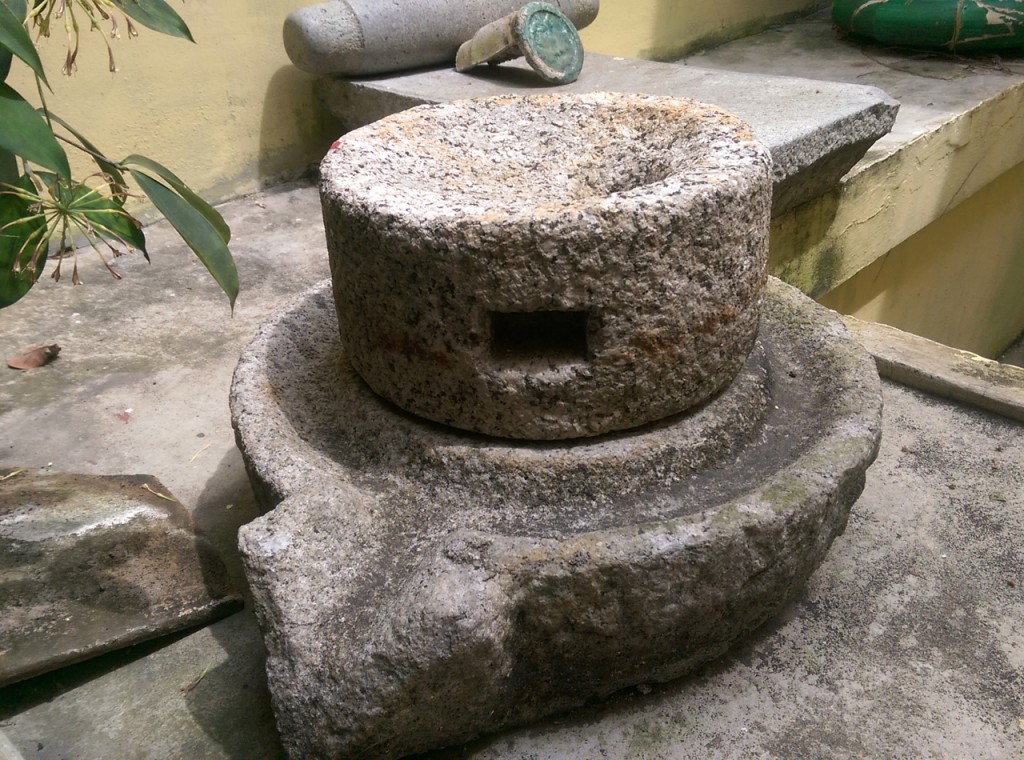 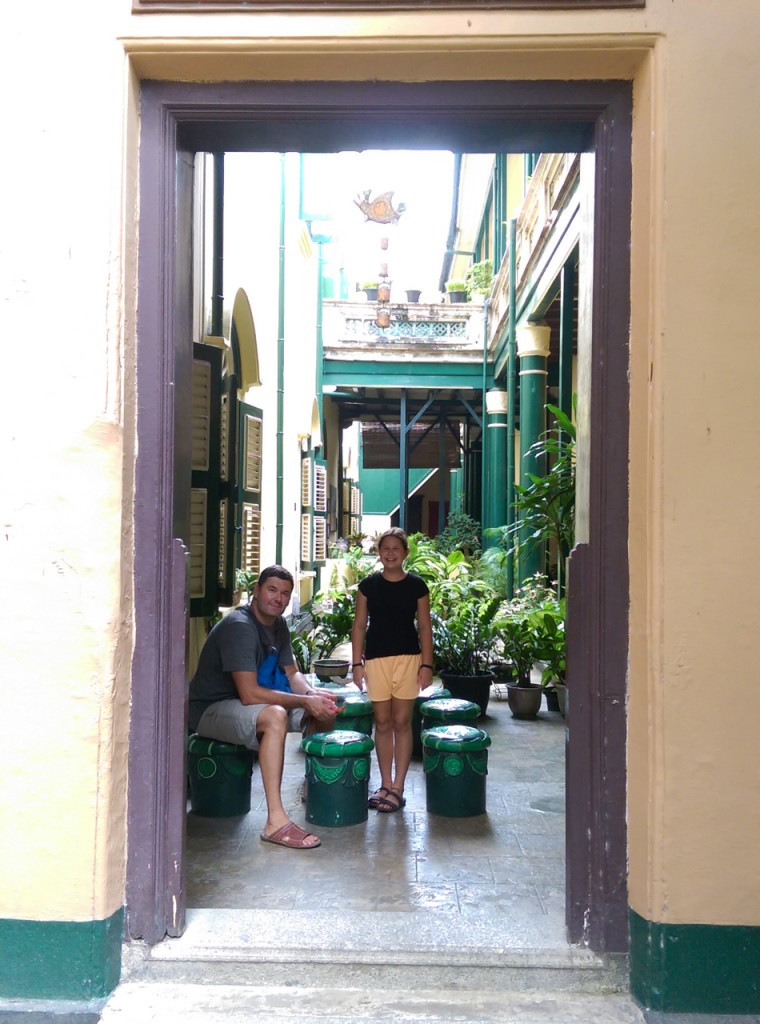 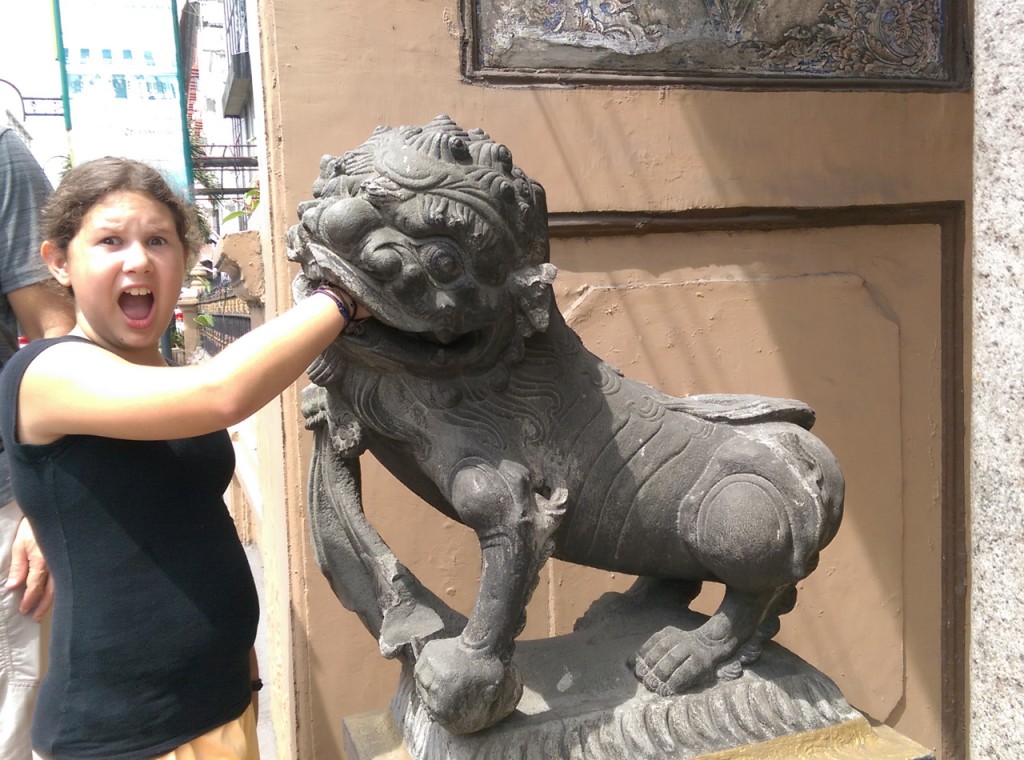 After the mansion, we walked to a cafe and had some cold drinks. Refreshed, we stood to leave and were immediately approached by a group of school kids. They had a class assignment and Waco agreed to be their subject. 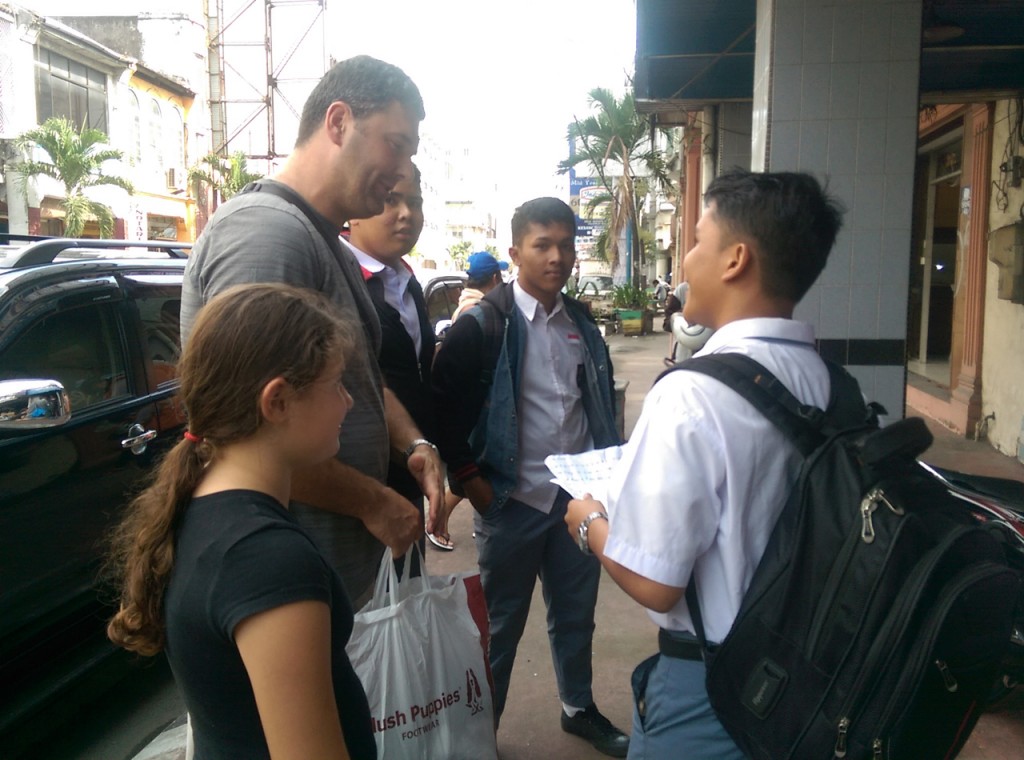 Being interviewed and filmed 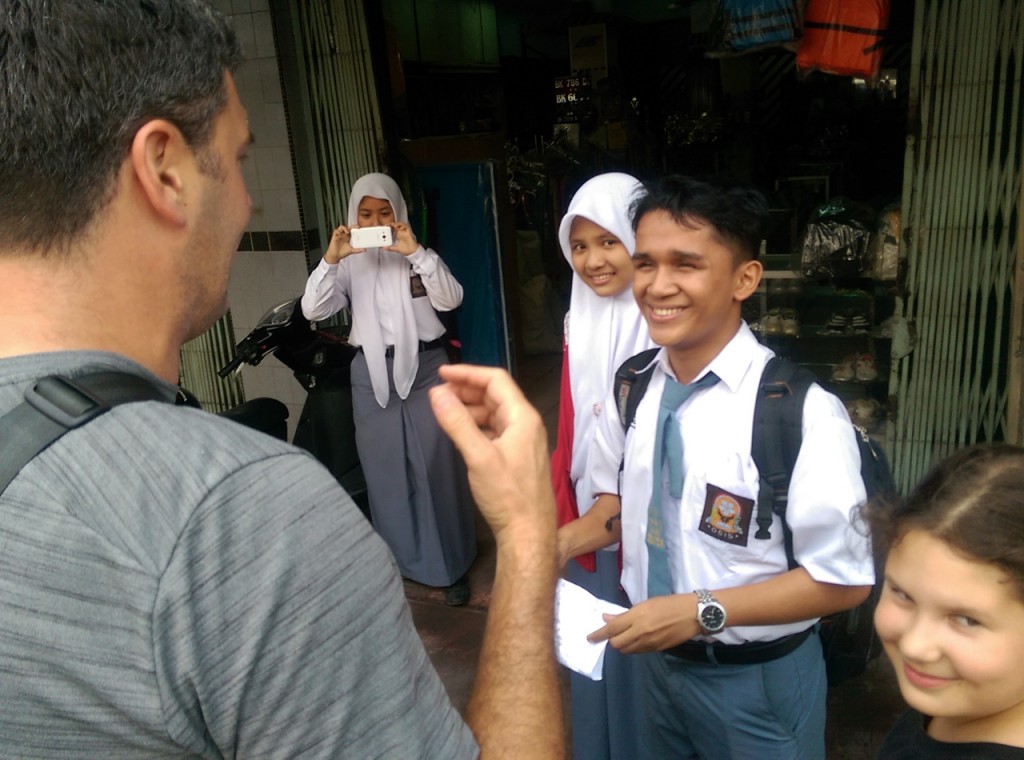 It was a fun moment in our day and we were happy we didn’t brush them off. There were quite a few individuals and groups who asked for money as we walked around and we (wrongly) assumed the kids might be an organized group collecting funds. We wonder where their video will be played?!?

We finished the interview and continued our walk, observing some crumbling buildings that must have had a former life filled with glamour. 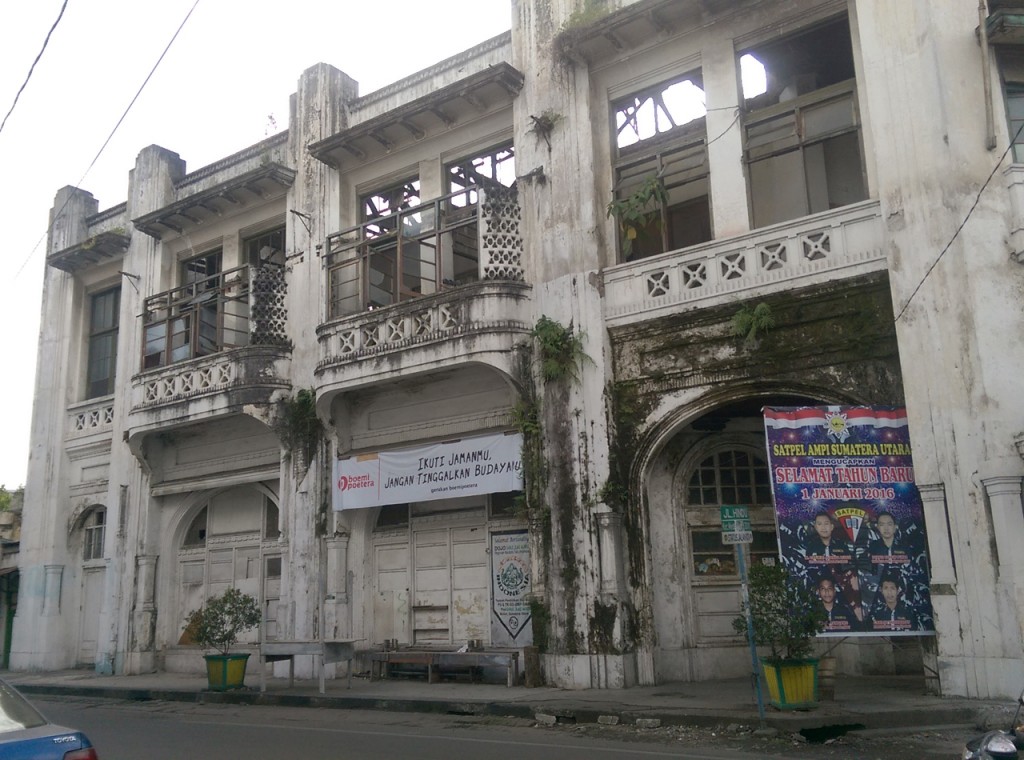 Someone bring me a power-washer! 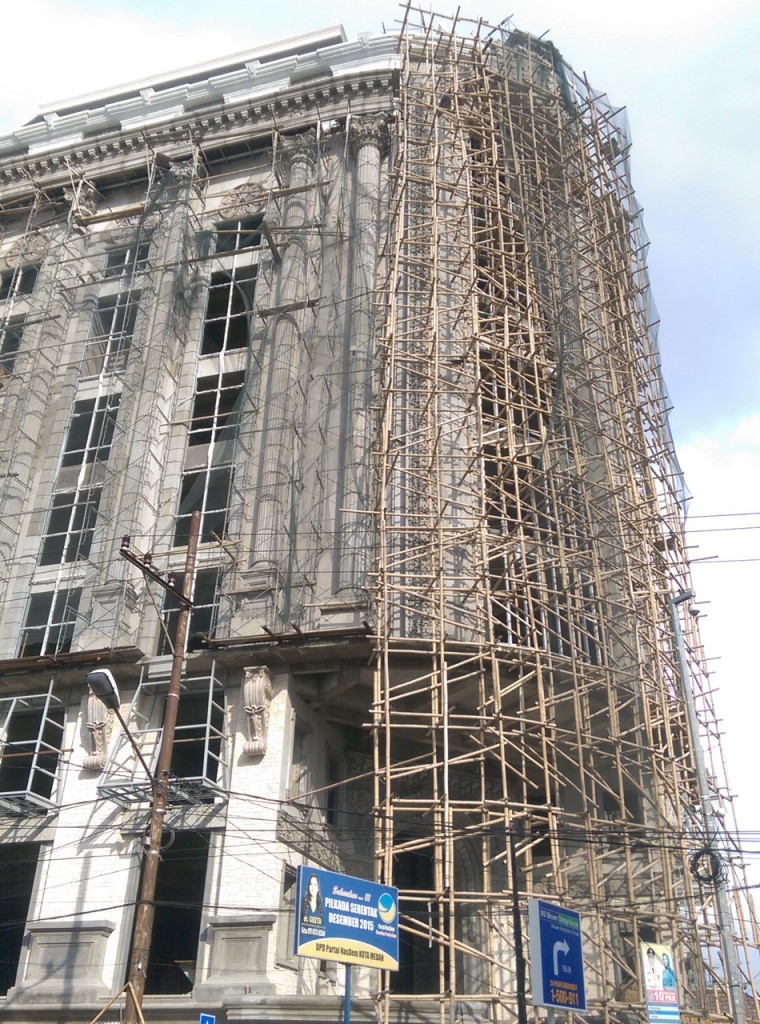 Look at this incredible bamboo scaffolding 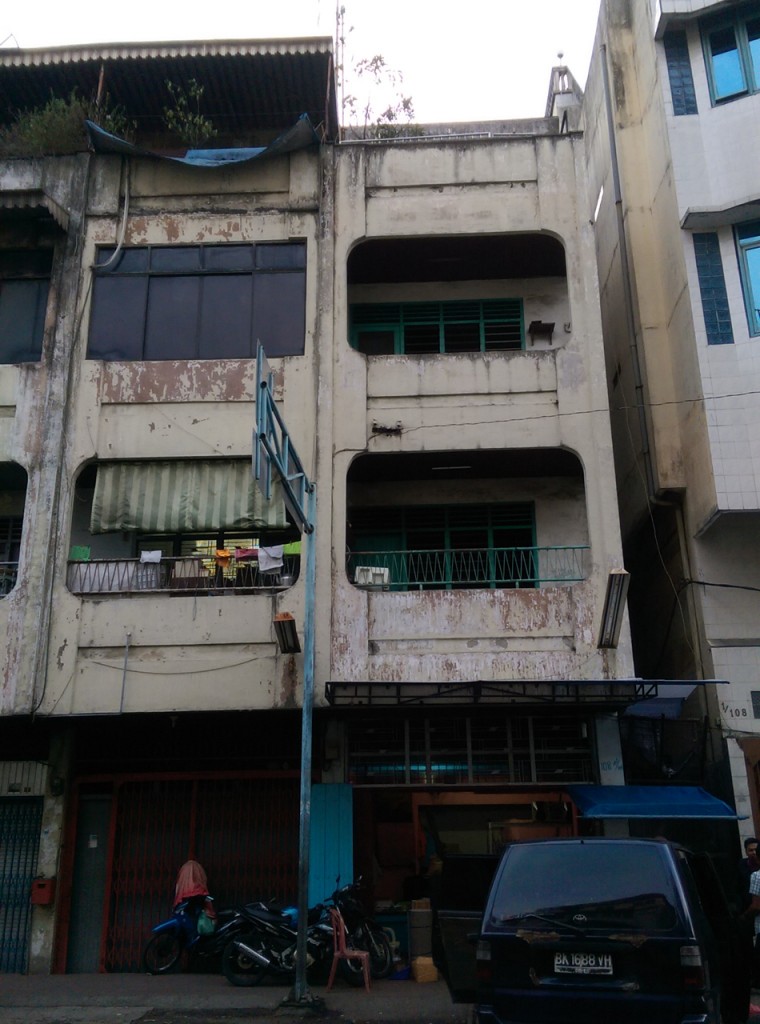 Great modernist facade with many years of “patina”

We took in more sights around the city, eventually finding our way to its famous baking district. Medan is known for many cakes, and anyone living there or passing through is obligated by friends and family to bring them a favorite cake. We saw people buying up to a dozen cake boxes at a time, and throughout our travels in Indonesia, we would notice other travellers with Medan cake bakery boxes that they were bringing back for themselves or to share. We tried Ratna Bakery and were delighted with their scrumptious Lapis Legit and Bika Ambon. 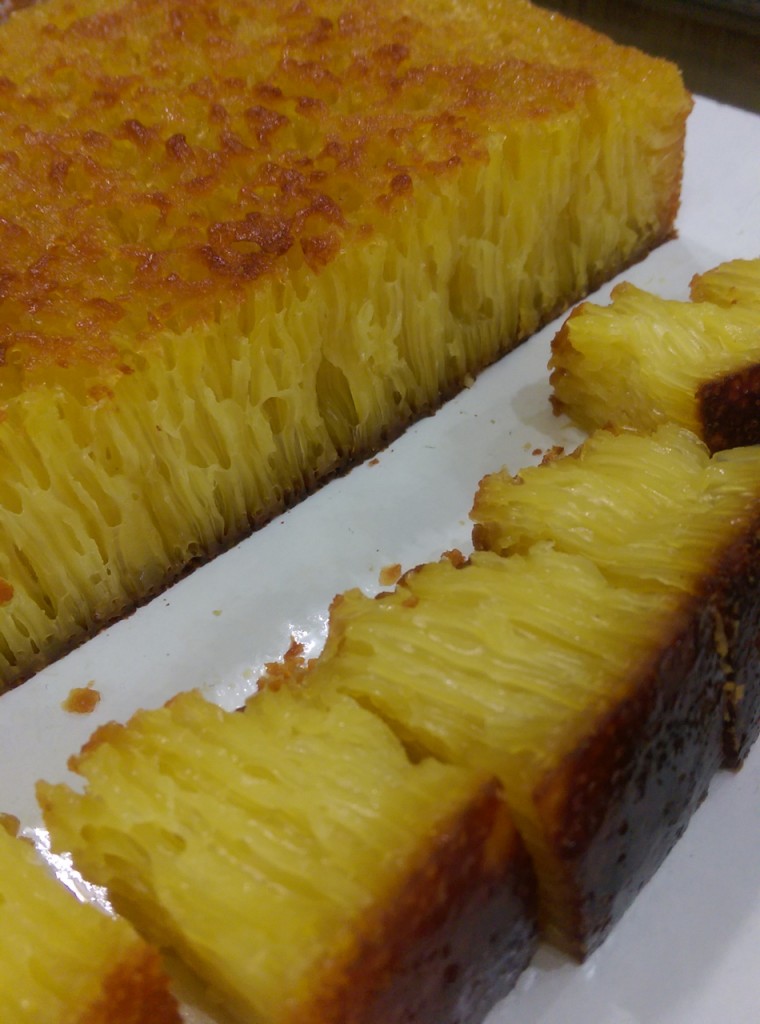 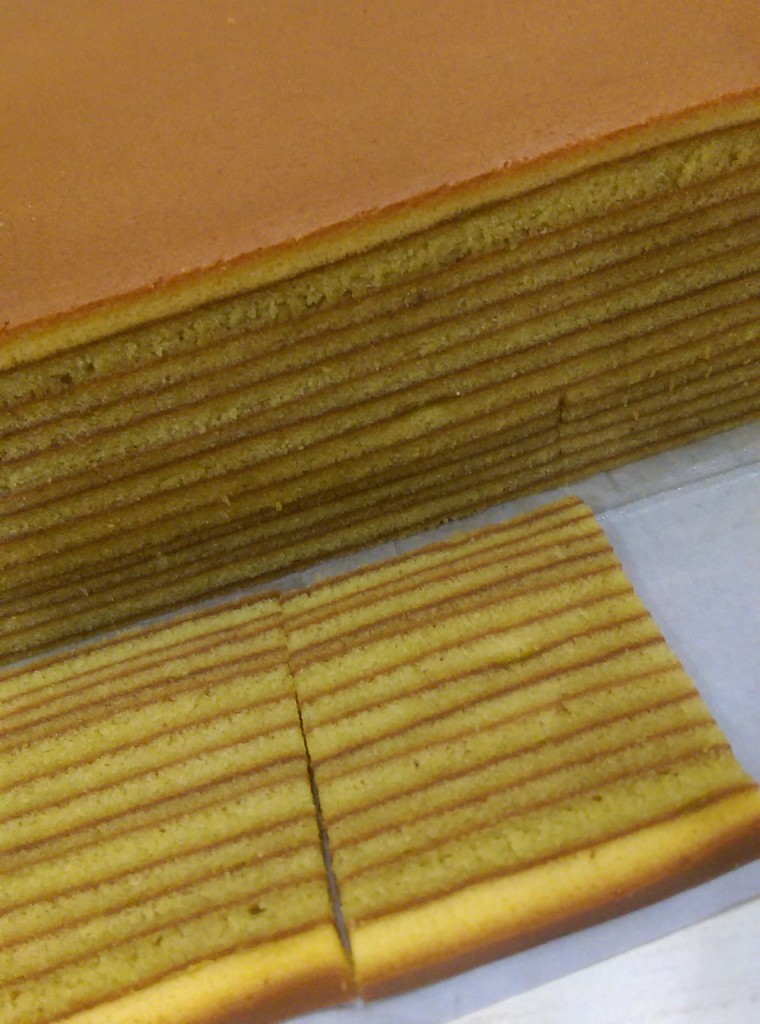 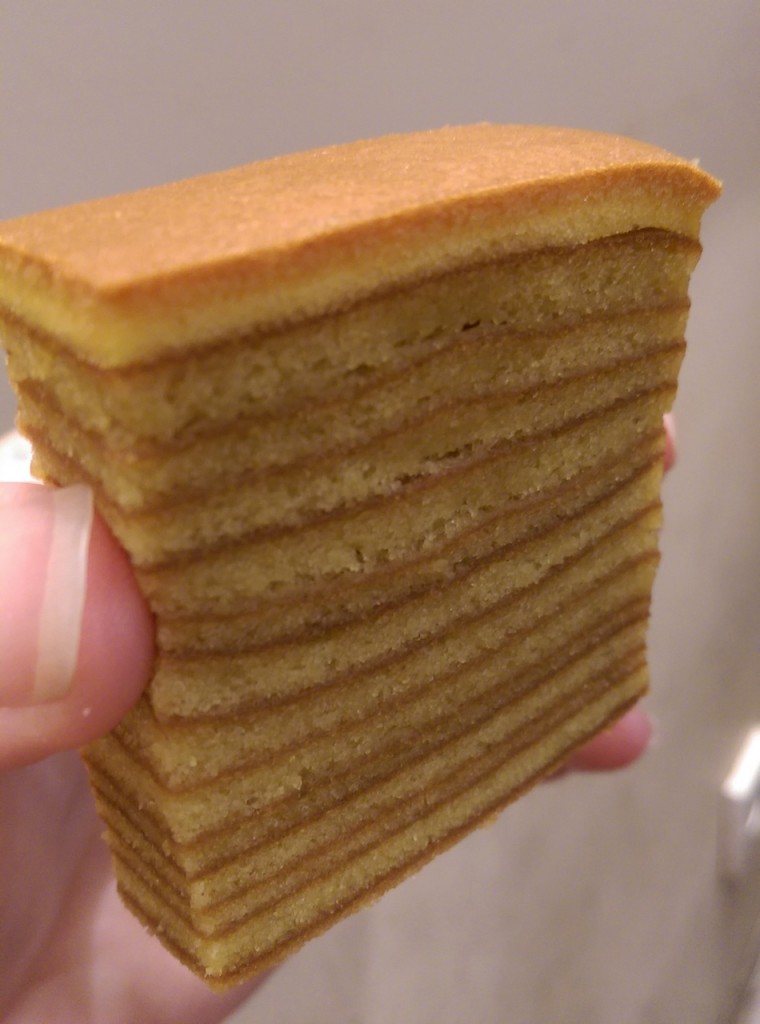 The cakes were not too sweet, had beautiful construction, and unique flavors and aromas of pandanas leaf, cardamom and other unidentifiable ones. We all enjoyed the texture of the bika ambon, which some people call “honeycomb”.