Hi everyone! We’re finally posting some photos and a bit about our last days in Bangkok, Thailand. We are currently in Berastagi, Indonesia at a small homestay. The home and our hosts are lovely, and we were surprised to find out that their WiFi was fast enough for us to load photos. Hooray!

After Grams and Grandad’s visit, and just before New Years Eve 2015/2016, we decided to try out a new area in Bangkok. We had already sampled Silom and Bobae, both bustling, busy areas, full of street life in “downtown” Bangkok, and thought it would be interesting to travel a bit further north to a non-touristy area for a few days before we left Thailand. We found a small hotel called B2 and booked a few nights. 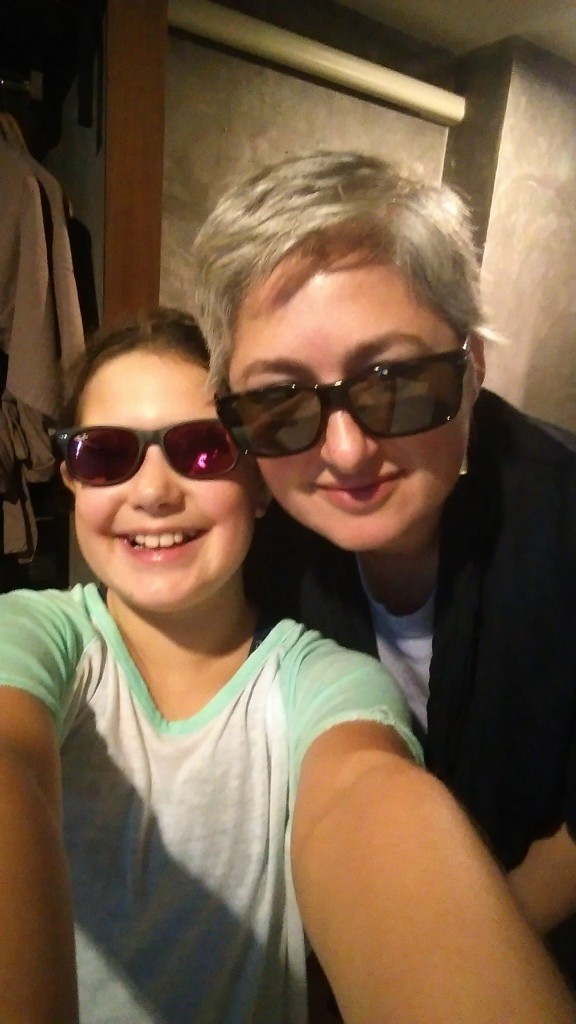 Silly sunglass selfie in our room at B2

The neighborhood where B2 is located is quite different from places we have stayed before. It feels like an older, possibly formerly bustling neighborhood that has been altered by highway construction and “big box” development.

We could walk around a bit through neighboring streets, but it was clear that those who walked were in the minority; everyone had a car or motorbike and there were very few people out walking. We did try to get around a bit on foot, but ended up hailing a taxi midway through a walk, realizing we were a bit trapped in a vehicular maze and couldn’t get from point A to point B unless we were in a car. All of the construction related to newer highways and big retail developments had nearly completely eliminated walkable streets.

After getting stuck, we just took cabs for the short distances we needed to go. It wasn’t as interesting as walking, but we just didn’t feel the need to force a walkable city where one clearly didn’t exist anymore. I guess “progress” is the same around the world. Cars, cars and more cars. 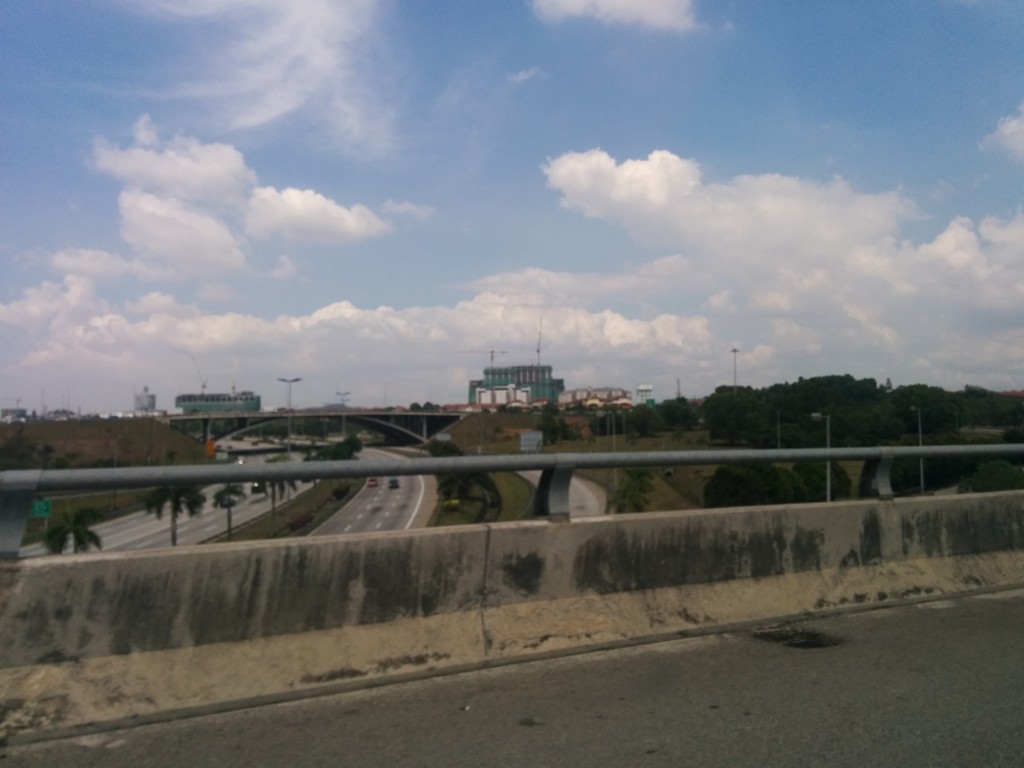 In this photo, we are standing on an absolutely massively scaled pedestrian bridge across a new mega-highway

We ended up spending a considerable amount of time in a nearby mall. Like back home, the mall has become the social space for many of Bangkok’s residents.

Almost every mall in Thailand has a sizeable “food court”. Food courts in Thailand are not the big name brand chain restaurants of American malls. They are essentially just a more sanitary version of a street food market. They are set up as groups of mini-restaurant operators, with each stall offering just one or two specialty dishes, prepared quite well. Thai food courts are also air-conditioned, which is sometimes an overriding factor when we consider dining options. We freely admit that, after half a year of regularly exploring new places, sometimes sweating for hours, when exhaustion and hunger are involved, we sometimes reduce dining decisions based upon whether they will provide an air-conditioned space, icy drinks and a comfortable seat. Thankfully, Thai food courts have rarely disappointed as they are inexpensive and often, surprisingly good. We were happy to find yet another good food court at this mall and enjoyed several of our last Thai meals there. 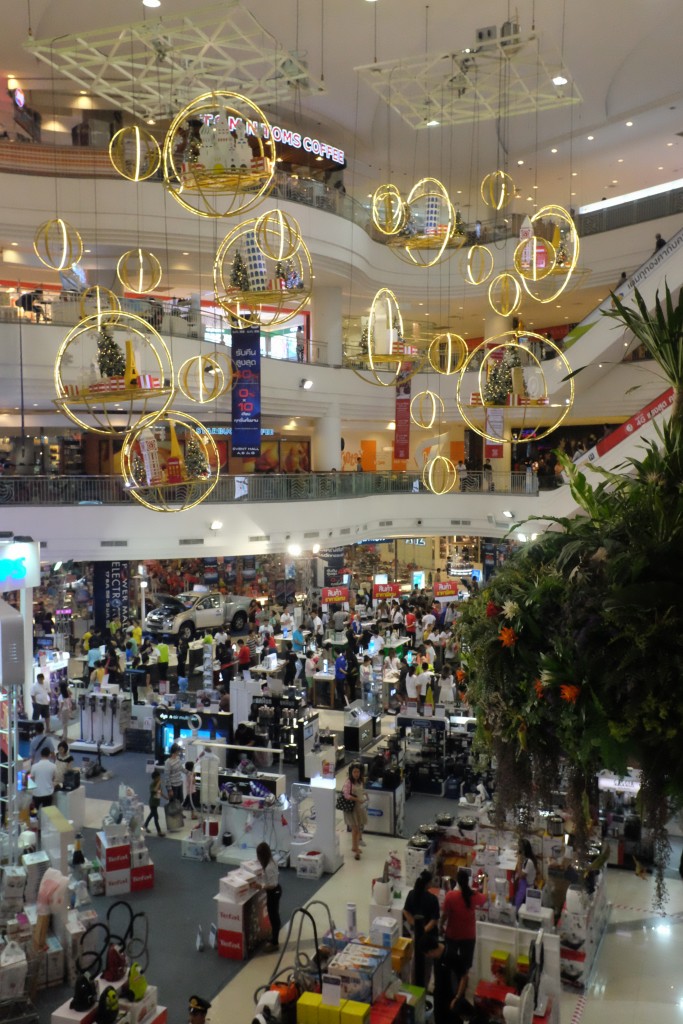 The mall where we enjoyed some air conditioning 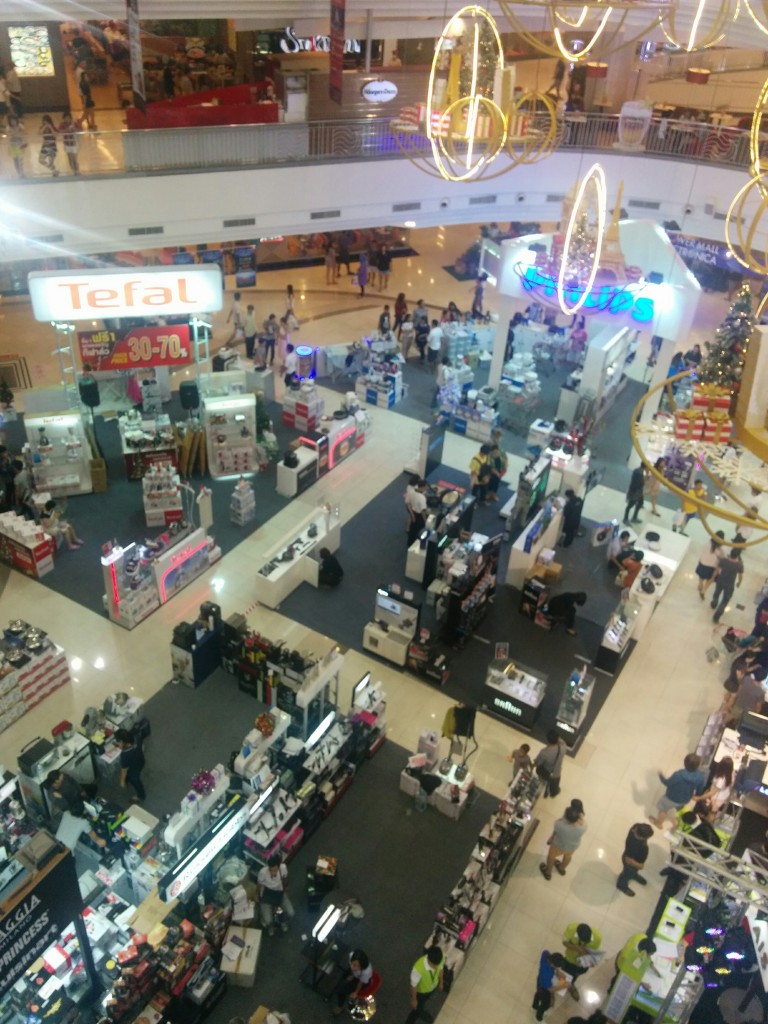 The volume in this mall felt like 10 zillion decibels 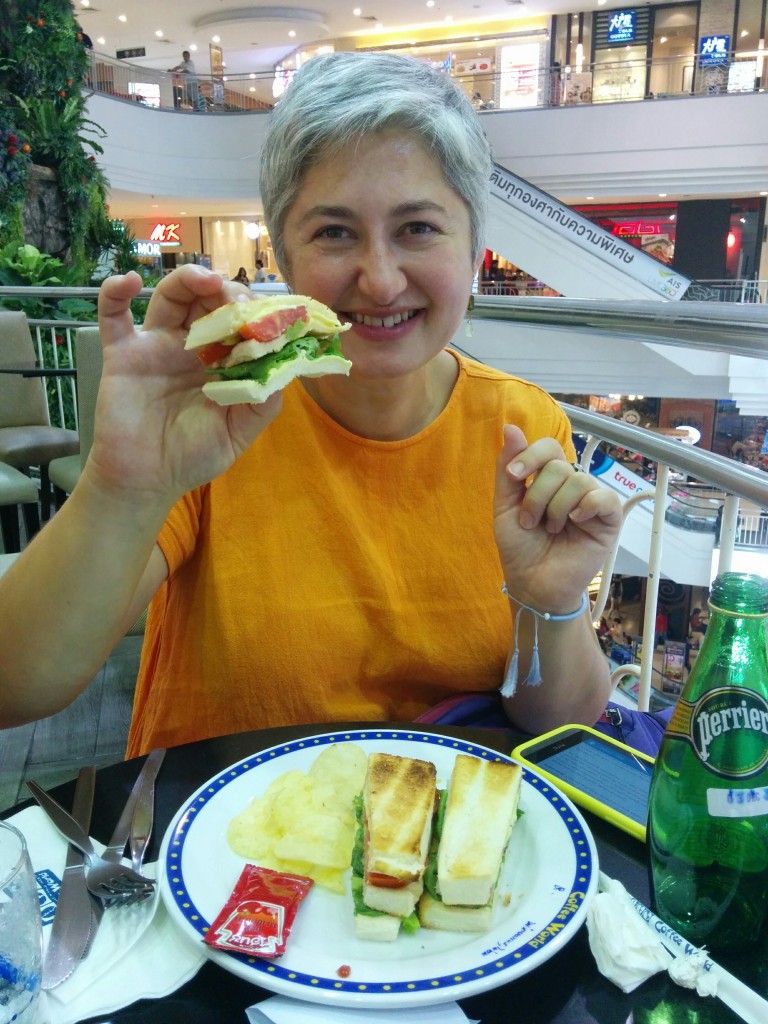 Sometimes, a simple sandwich and a Perrier is just right 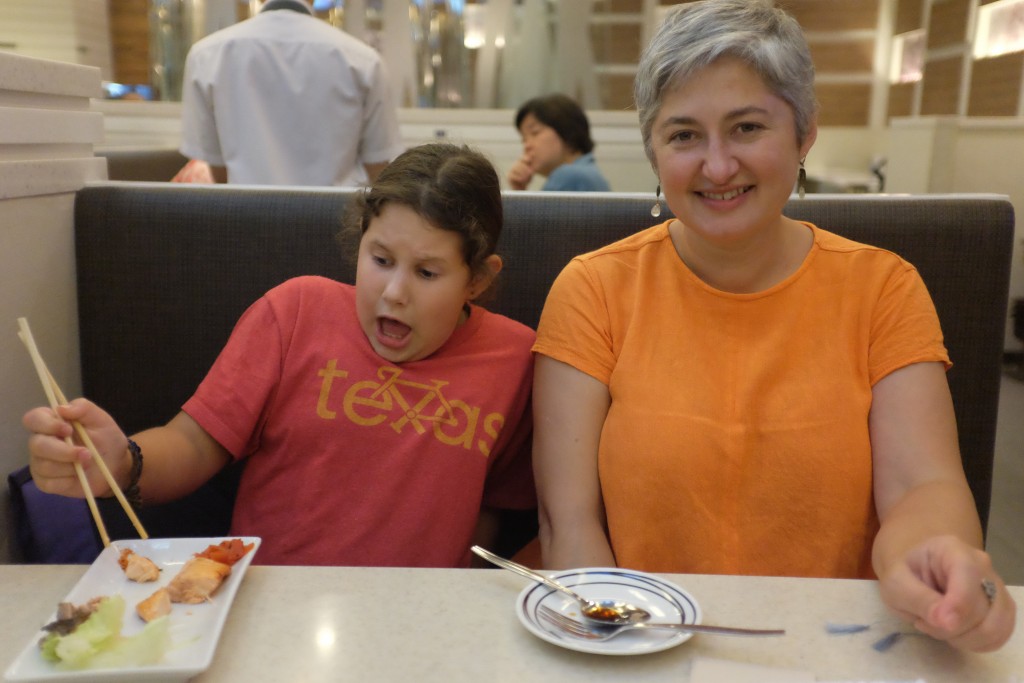 We can’t remember what made Jette react! This is one of her favorite meals, grilled salmon. 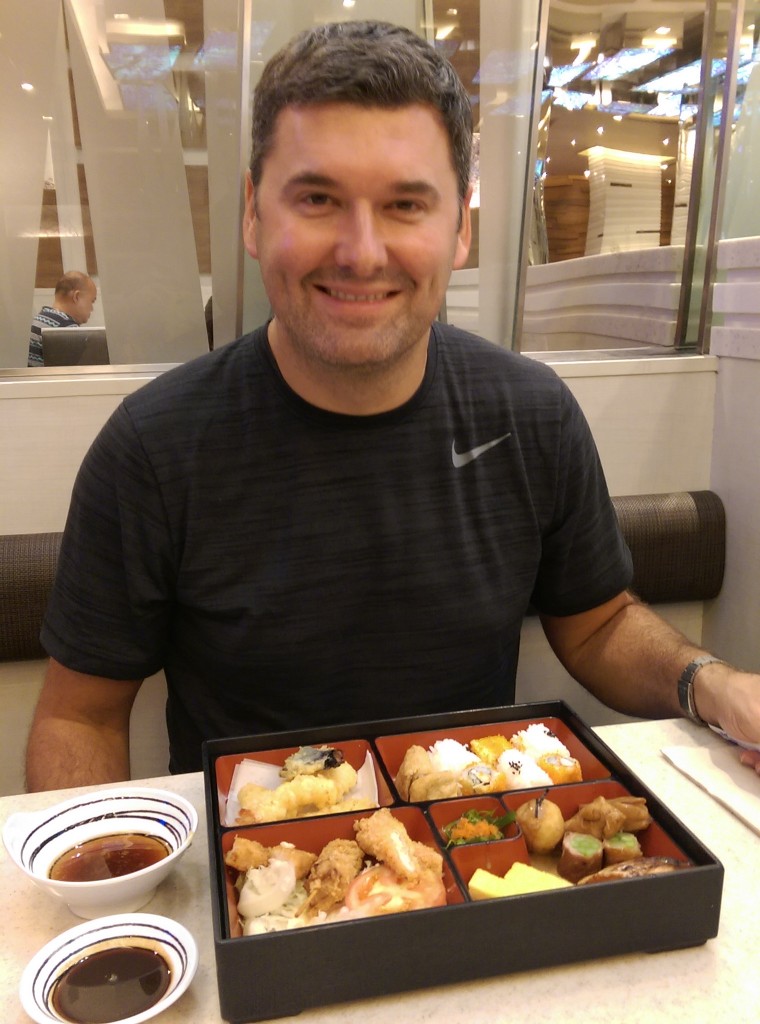 Waco, happy with his bento

Mall food courts typically have a counter like this one where you purchase a “credit card” and load it with money. You use the card on food purchases and go back to the counter to get a refund at the end of your meal for any unused credit. 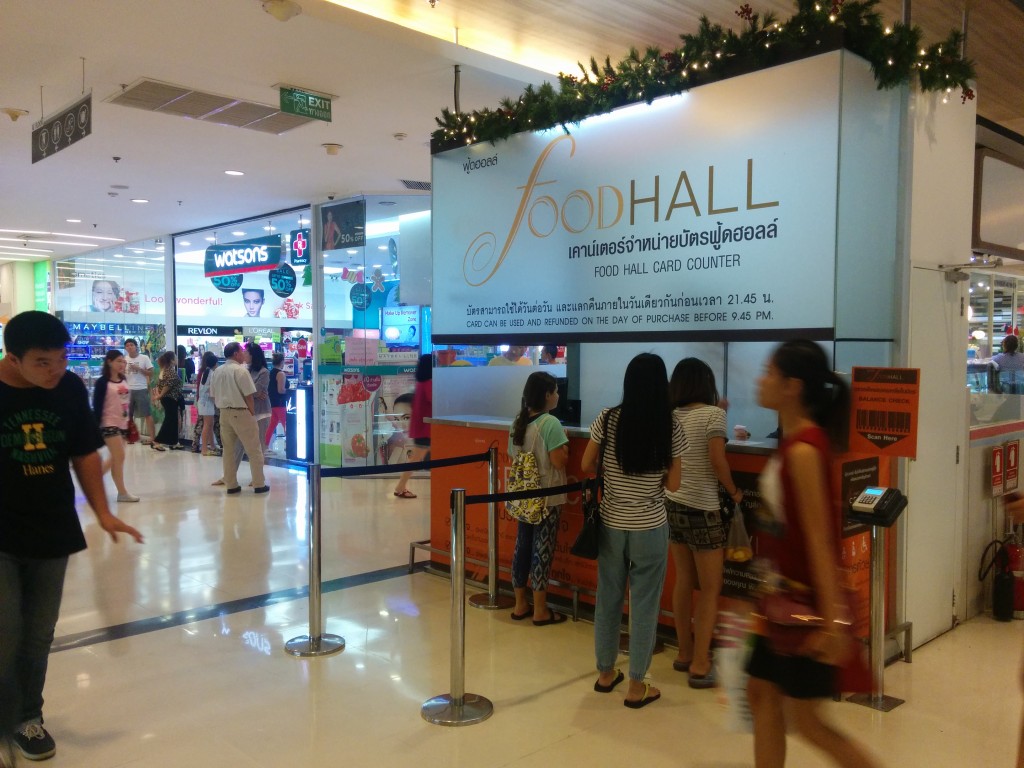 This is the “food court” entry in the above mall 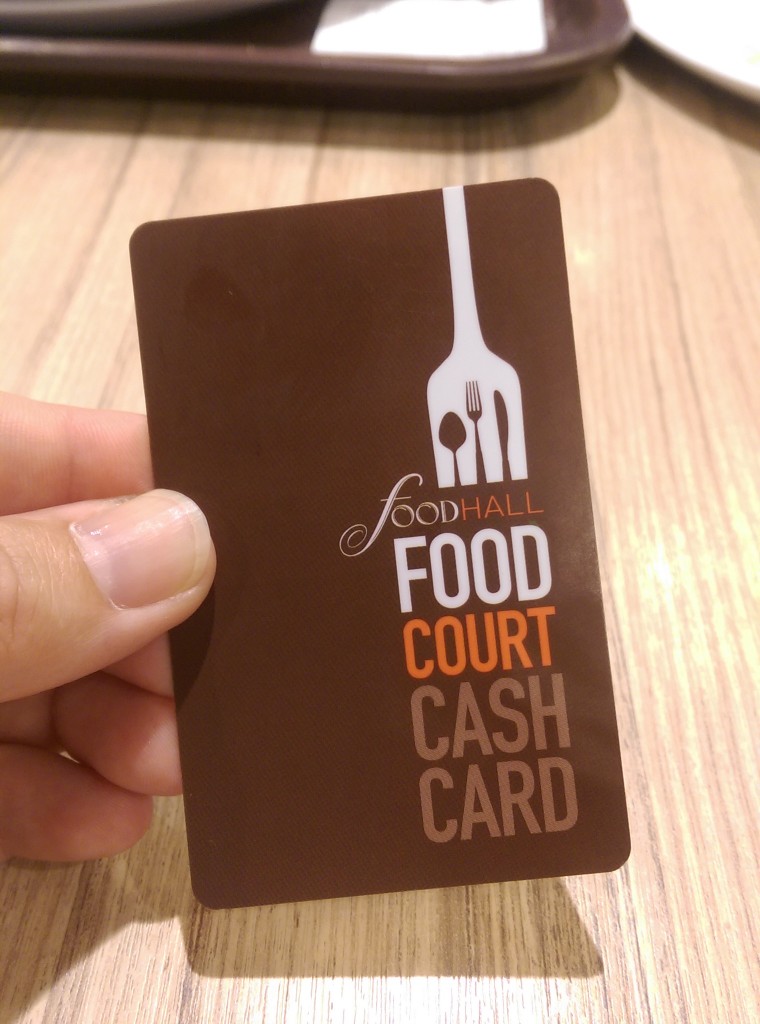 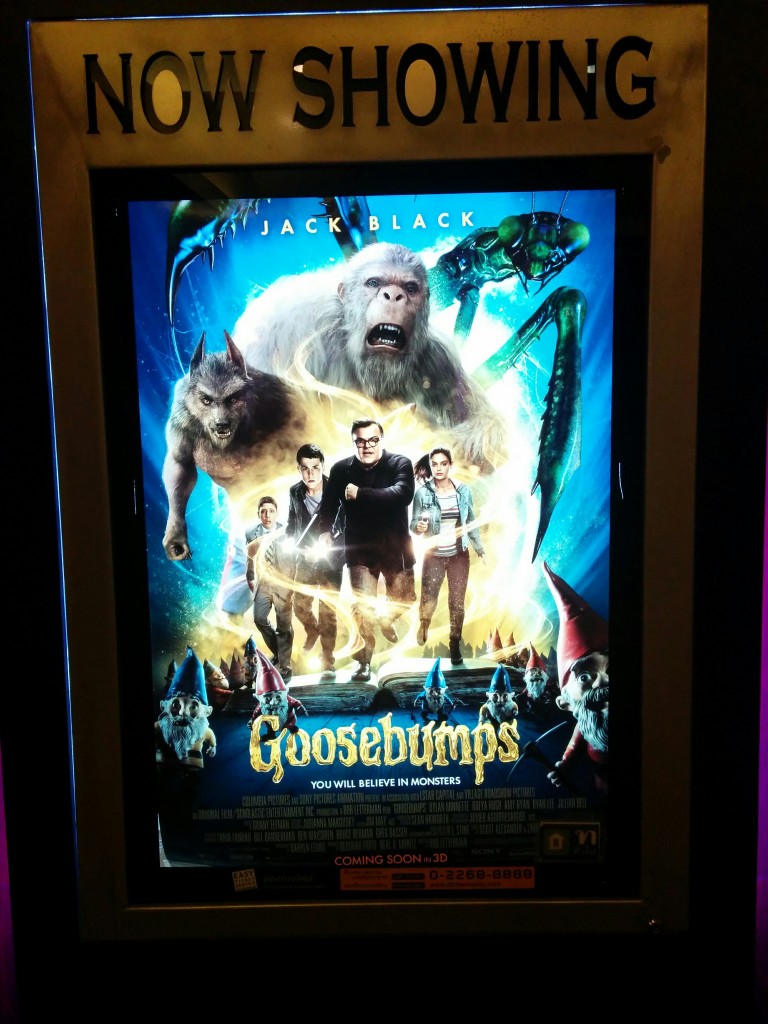 There was a movie theatre in the mall, so Jette finally got her chance to see “Goosebumps” 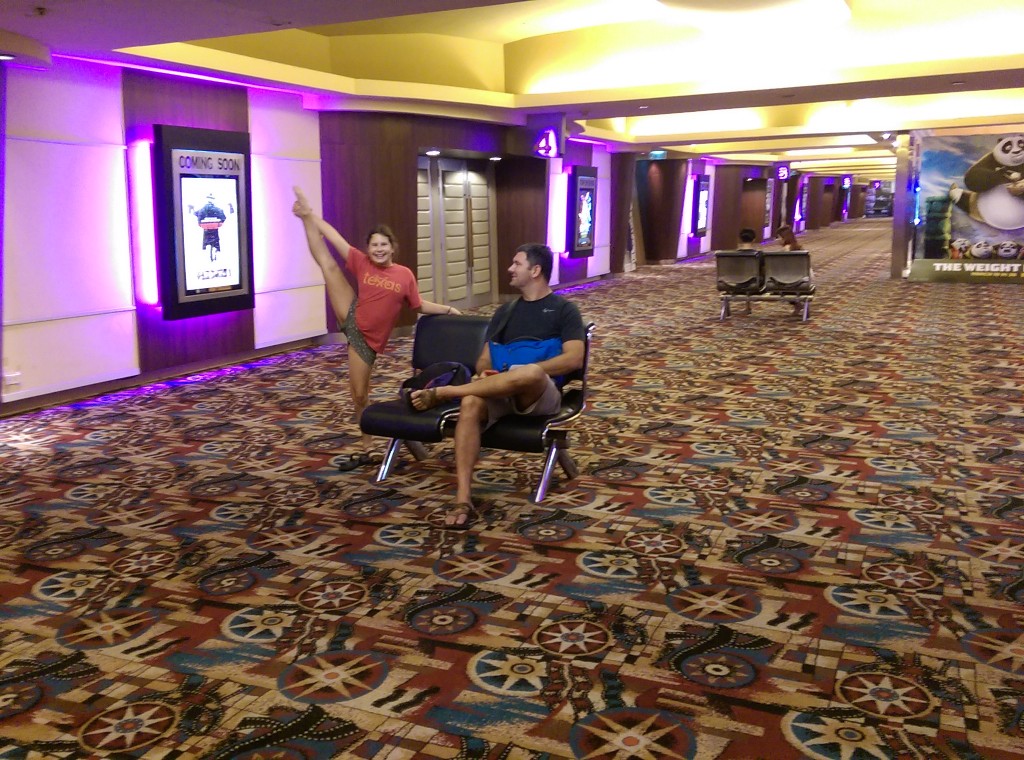 Isn’t this how you wait for your movie?

There were plenty of western style restaurants and Jette even enjoyed a pancake for breakfast one morning. 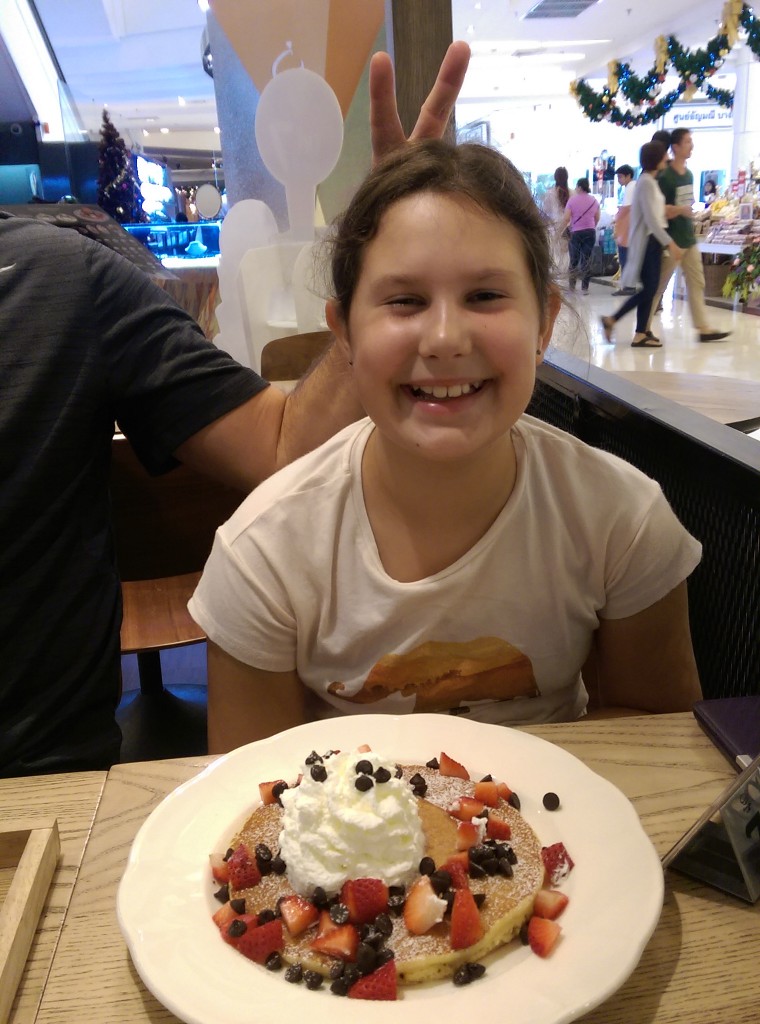 One giant pancake with fresh strawberries and chocolate chips, please 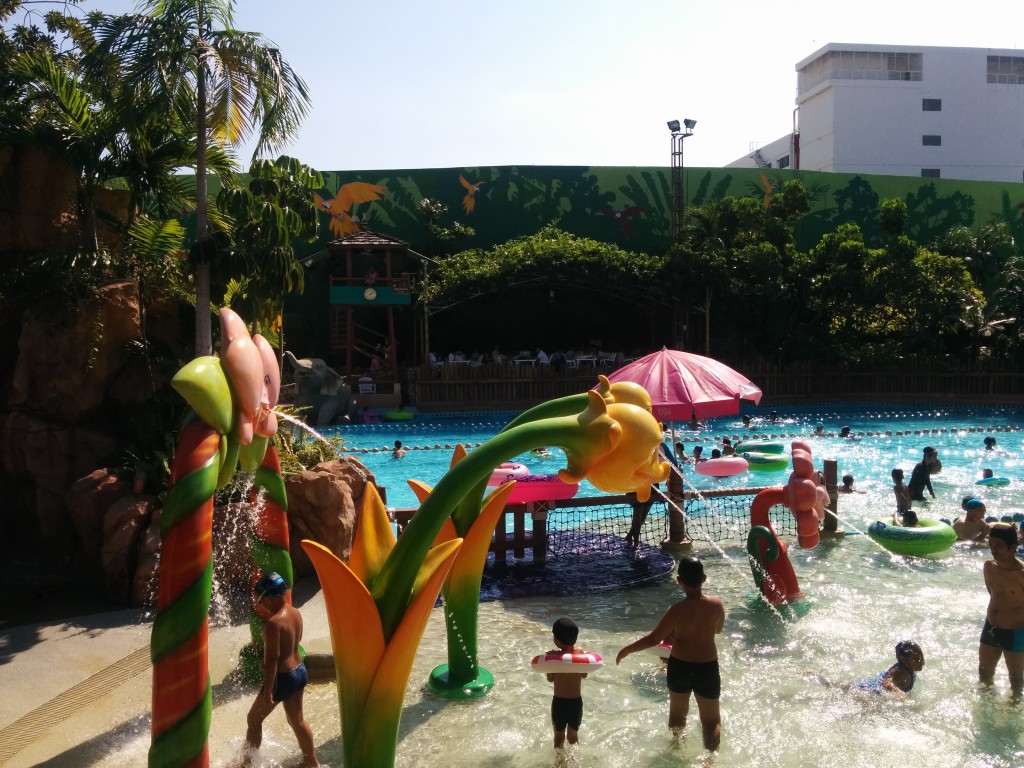 The top floor of the mall even had this amazing water park! 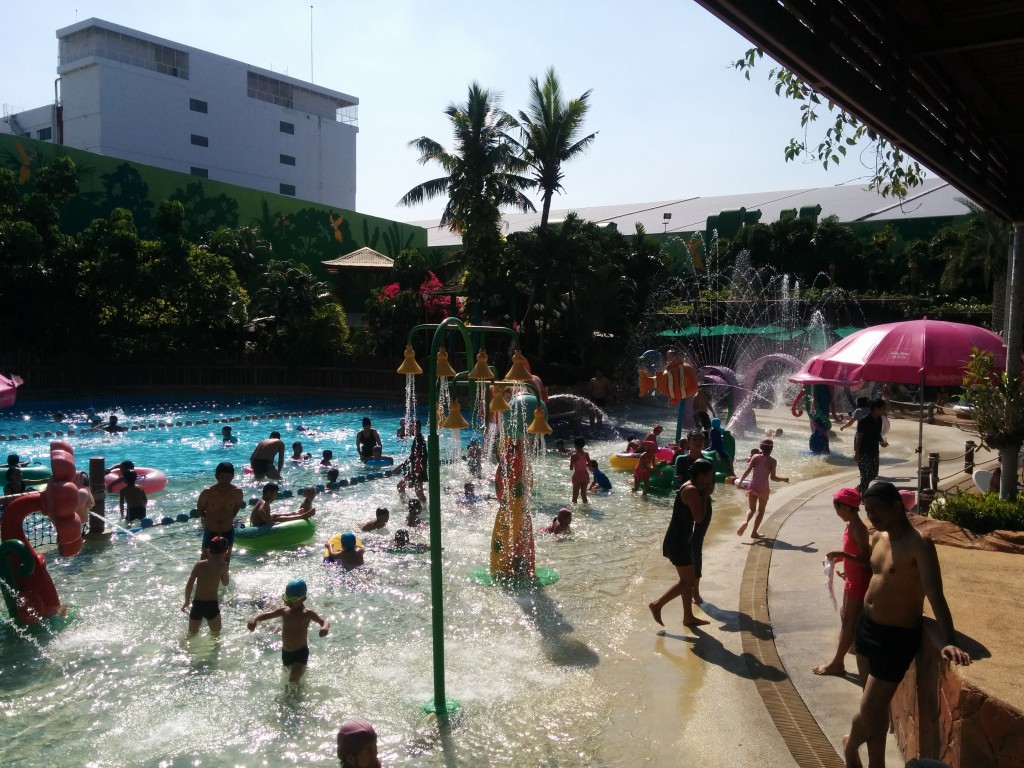 A great way to escape the Bangkok heat and humidity 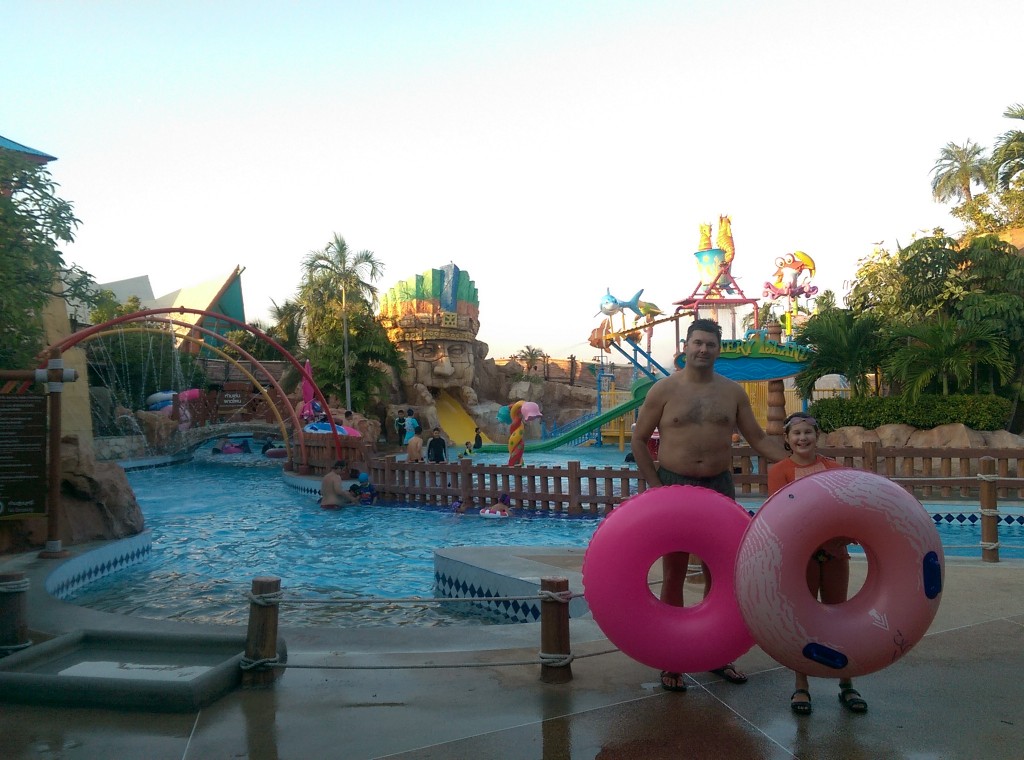 Thais generally wear conservative beach clothing, sometimes swimming in T-shirts and shorts to swim in the ocean. Bikinis are generally only seen on visitors to the country, and this water park was no different. Most of the Thai women were wearing loose-fitting spandex body suits with long sleeves and full length leggings. Spandex shorts were a common sight as well. Everyone also had to wear a swim cap per the water park’s policy. 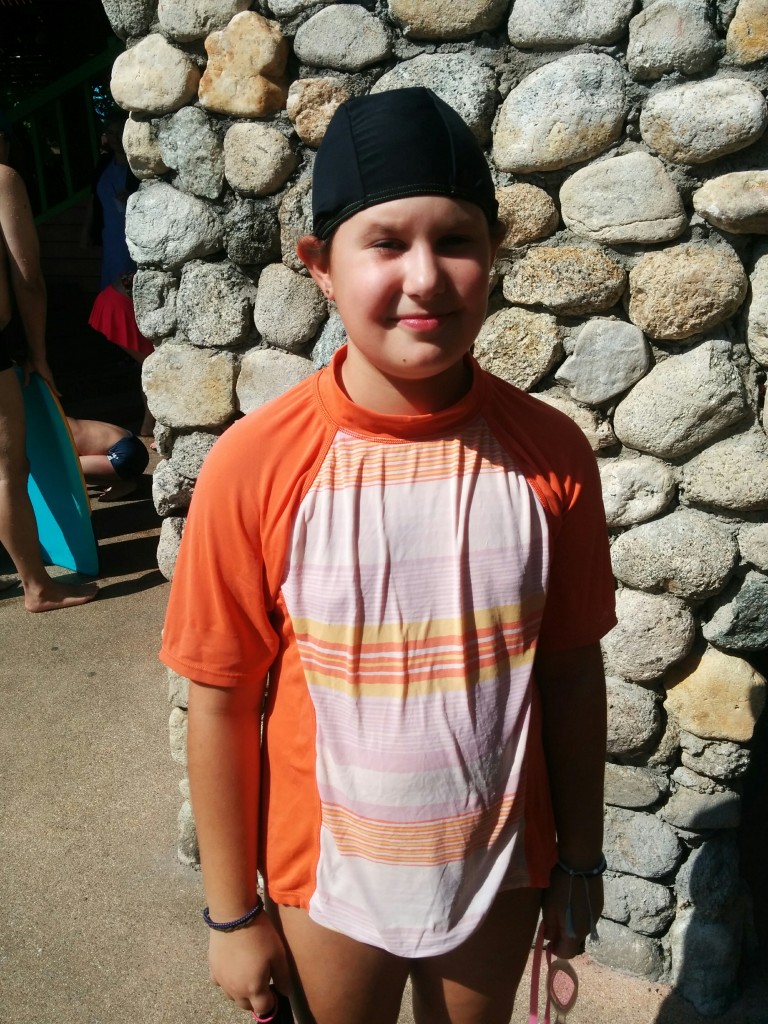 We also finally get to visit a Tesco/Lotus store. We’d heard so much about these groceries, and we were really curious about them. The one we went to was inside of a modern shopping mall and it turned out to be a combination grocery store and “everything else” store. It was extremely busy and looked like a very popular destination. We shopped for a few items we needed and explored the store a bit. Prices were a bit lower than other specialty shops for some products, but grocery prices were a bit higher than at the local markets. There were many inexpensive, casual clothing options in larger sizes. It made us wonder what came first, the bigger shops or the bigger people. All in all, it felt very suburban, quite similar to going to a “SuperWalmart” in the States. Is Costco-Thailand next? 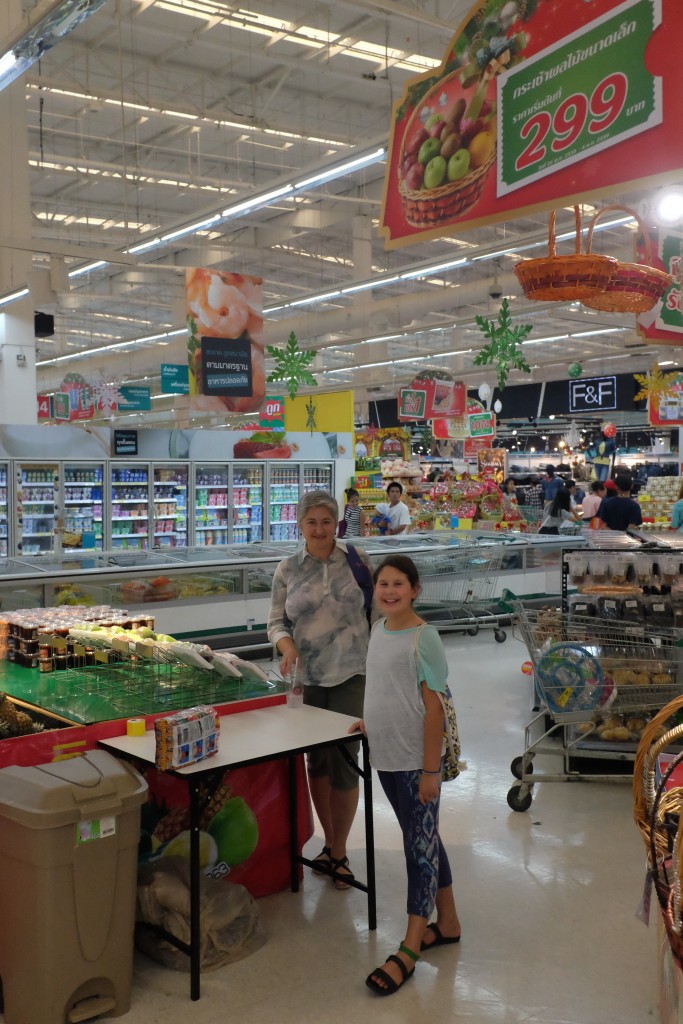 One of our last nights in Thailand was New Year’s Eve. We spent the day out and about exploring. Just across a main road from our small hotel was a really nice, upscale, large hotel that appeared to cater to large groups of Chinese tourists. We decided to take a peek at their rooftop pool. We took this pretty photo from there just as the sun was setting. 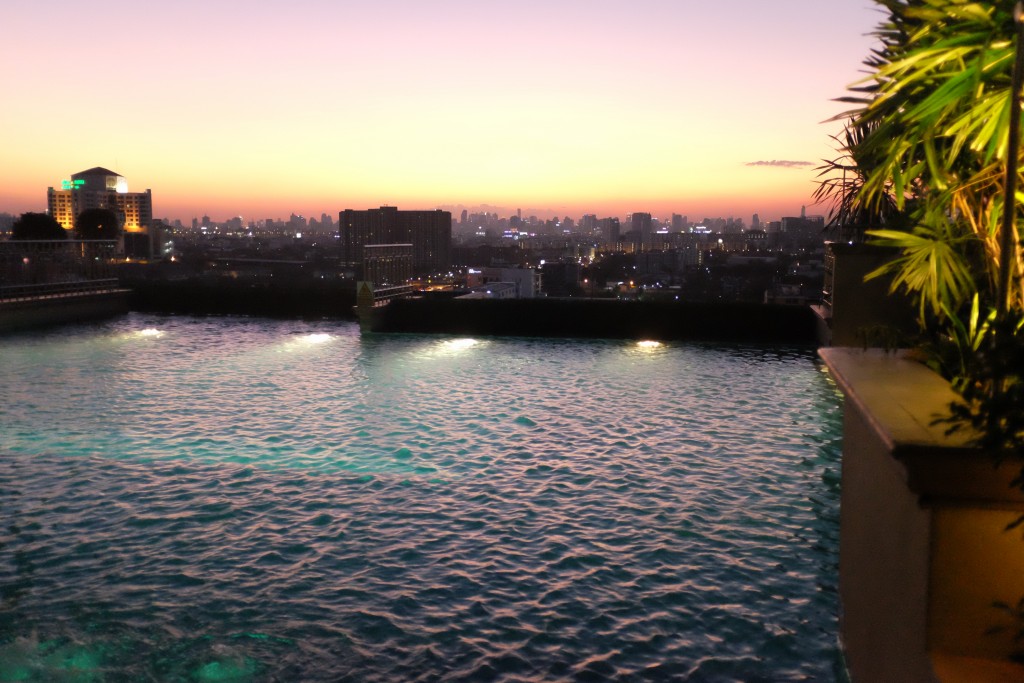 Lovely view over North Bangkok and beyond 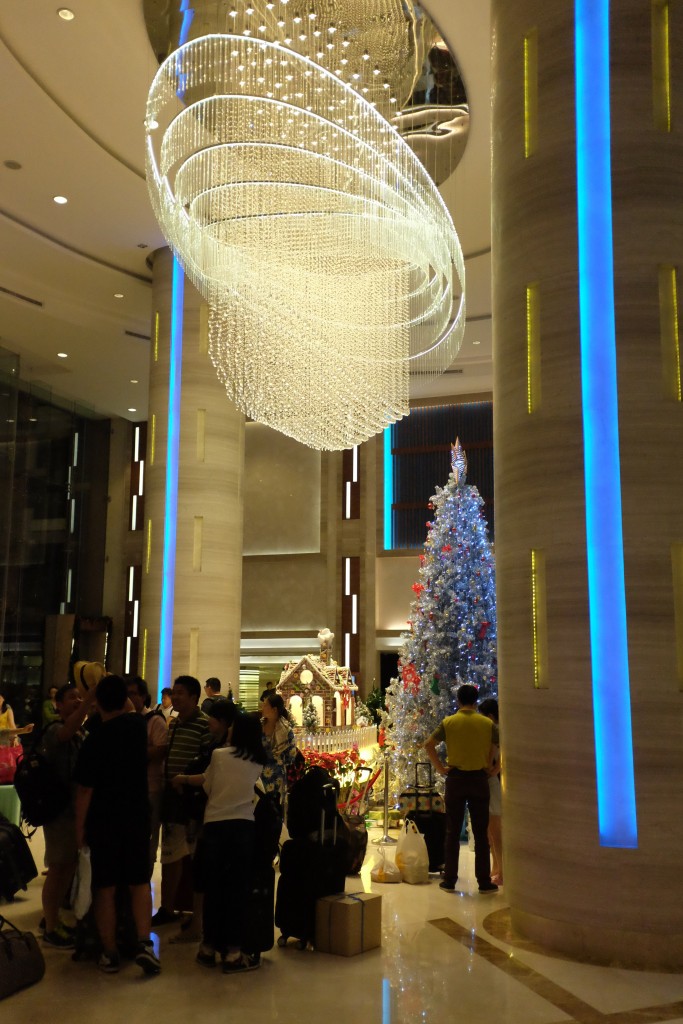 Lobby of same hotel with a spectacular crystal light fixture 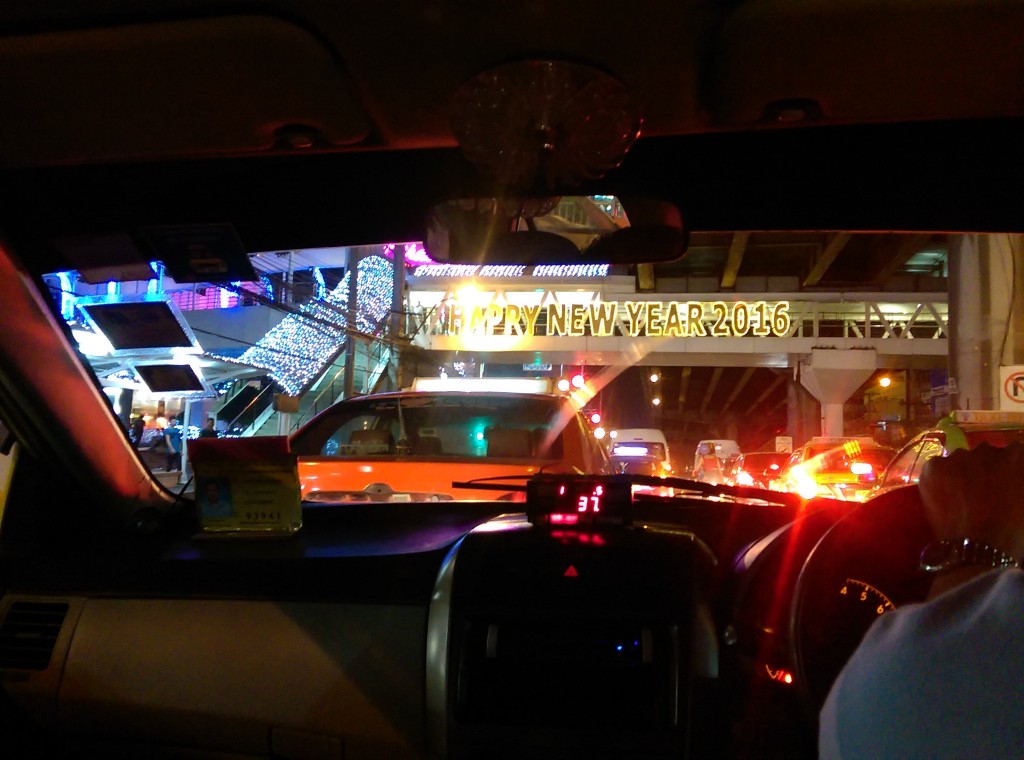 The most exciting aspect of our New Year’s Eve was, unfortunately, a fight that broke out in the room next door. It was actually quite disconcerting with a lot of screaming and shouting and it even made Jette break down in tears. We ended up reporting the incident to the hotel because we had serious concerns that someone in the adjacent room was going to get hurt. The front desk staff very casually let us know they would call to the room to ask our neighbors to be quiet. We were shocked at their lack of concern, but really couldn’t do much else. The argument did seem to break up after a while and it was quiet for the rest of the night.

Bangkok makes a very big deal of New Year’s Eve and we considered taking a taxi back into “downtown” Bangkok for fireworks, but Jette decided she would rather have a quiet cozy evening at “home” after all the excitement earlier in the evening, so that’s what we ended up doing. We did swing open a large window in our room around midnight to inhale our last bits of the city and ended up catching bits of no less than six different fireworks shows all over the city. We also popped some bubbly (well, really just fizzy mineral water, but it was refreshing!) The fireworks were impressive and just the right amount of noise and fanfare for us to bring in 2016.

The first day of 2016 was low-key. We did a bit of school work in a coffee shop. 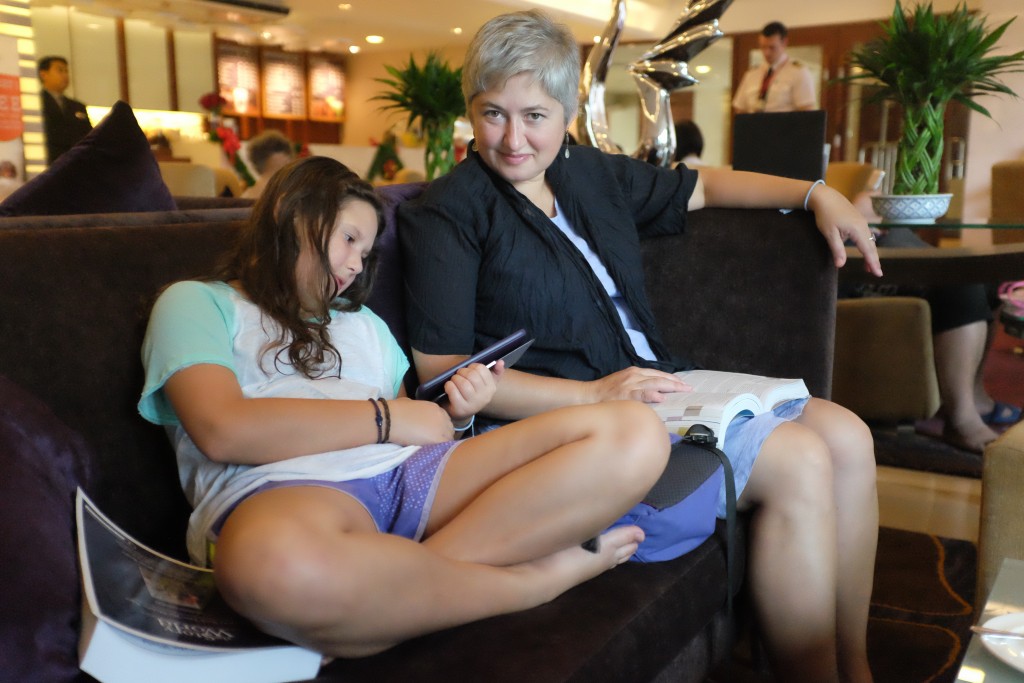 And the next day, we caught a very early morning flight to Kuala Lumpur, Malaysia. 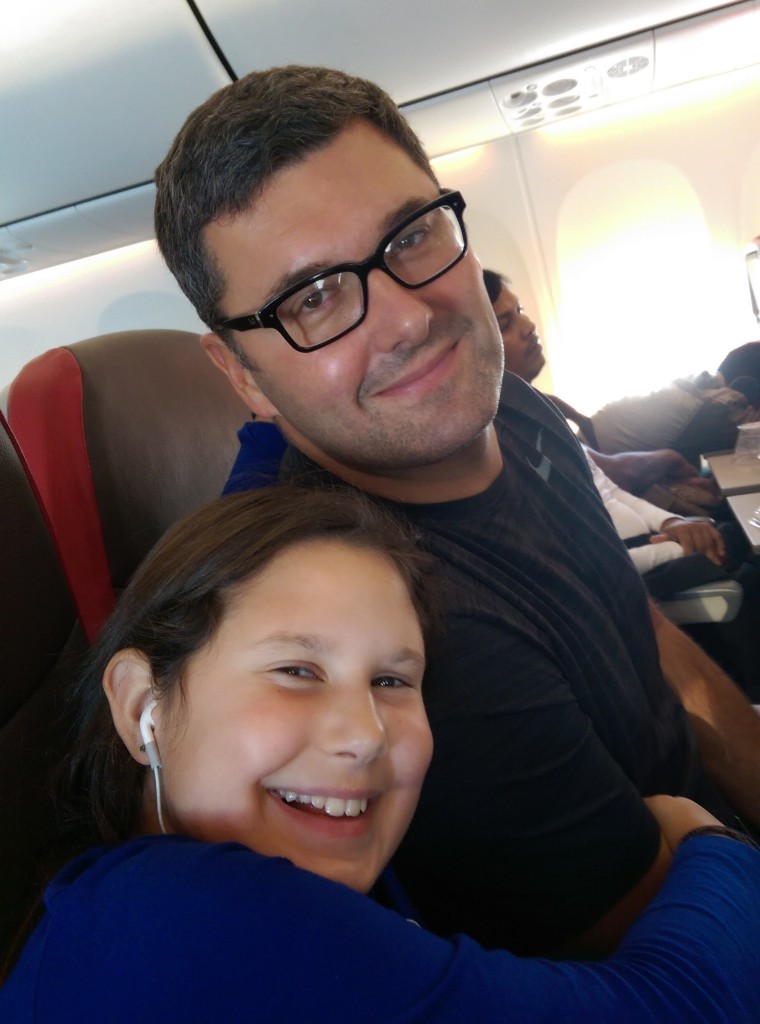 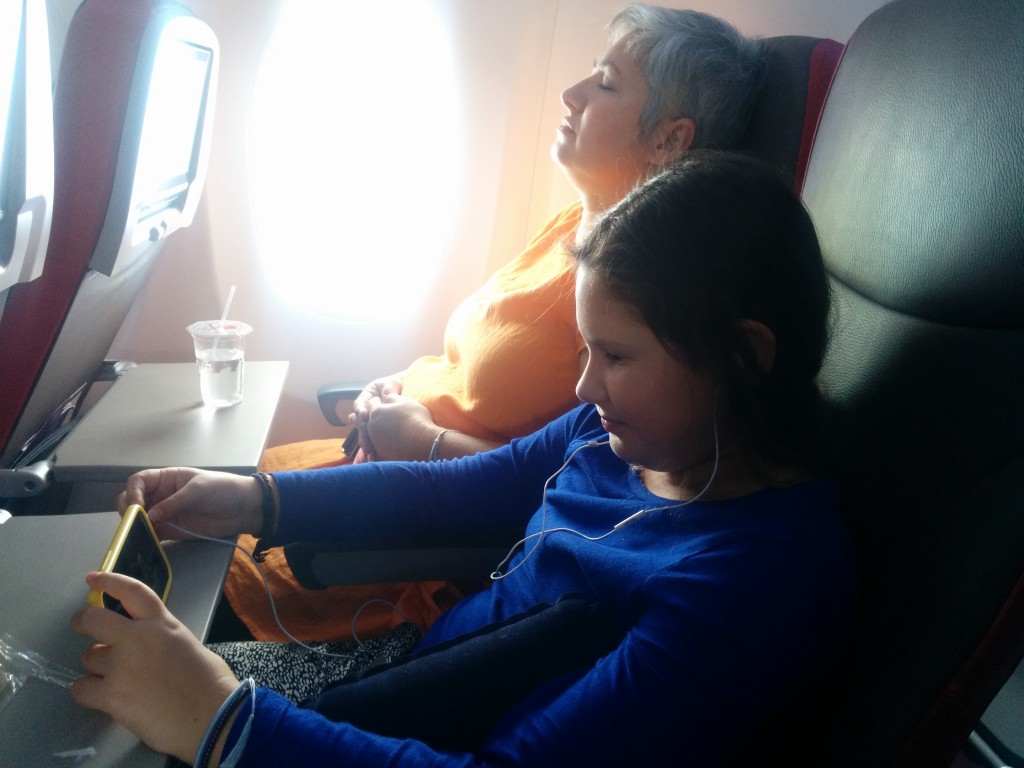 Mommy sleeps while Jette sneaks off with her phone