Life in Koh Tao was pretty darn good. We spent a quite a bit more than we typically do on our hotel (about $USD 60 a night), and it was worth it. The Mango Bay Resort was a great place to get away from everything for a while, slow down, catch up on blog posts and just relax. We’ve been travelling for more than 5 months now, and even though it feels more like 5 weeks and we’re far from fatigued, it was nice to just STOP and relax and read and not think about where to go tomorrow or what to do or what’s next. Beaches are good for that I suppose. 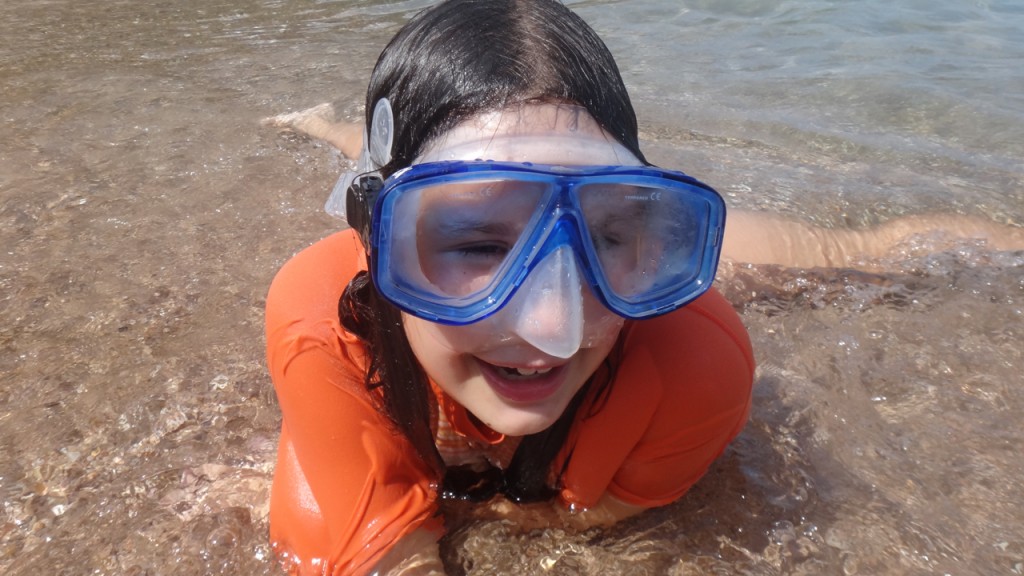 A little seal on the beach.

We spent some days just lazing around. Reading, relaxing, and swimming/snorkeling. Other days we took the boat to Sairee Beach and into “town”. We had a favorite restaurant on Sairee Beach, and there was a Mexican restaurant (run by a Californian) in town that we enjoyed. Jette has developed quite an appreciation for bean and cheese burritos! 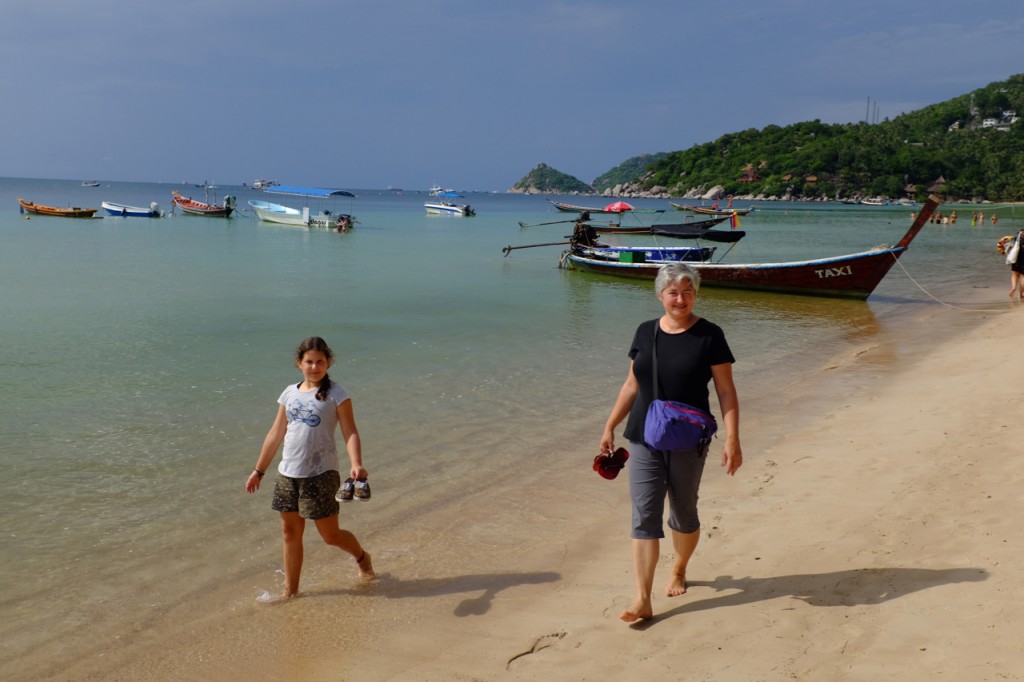 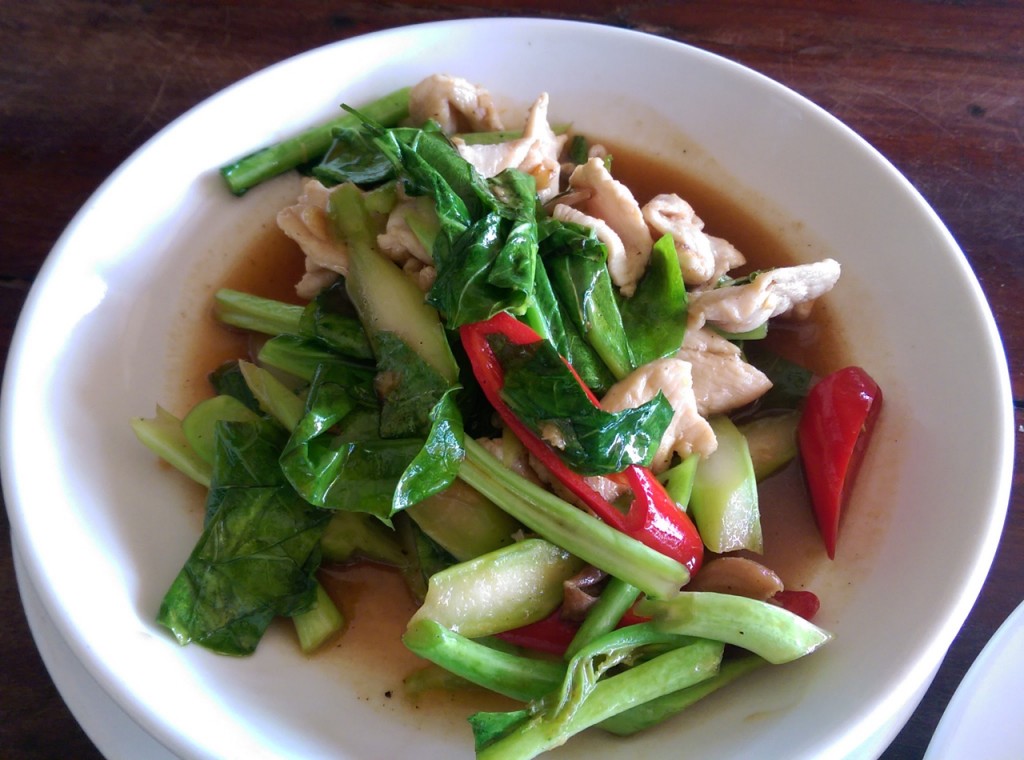 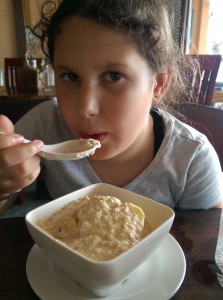 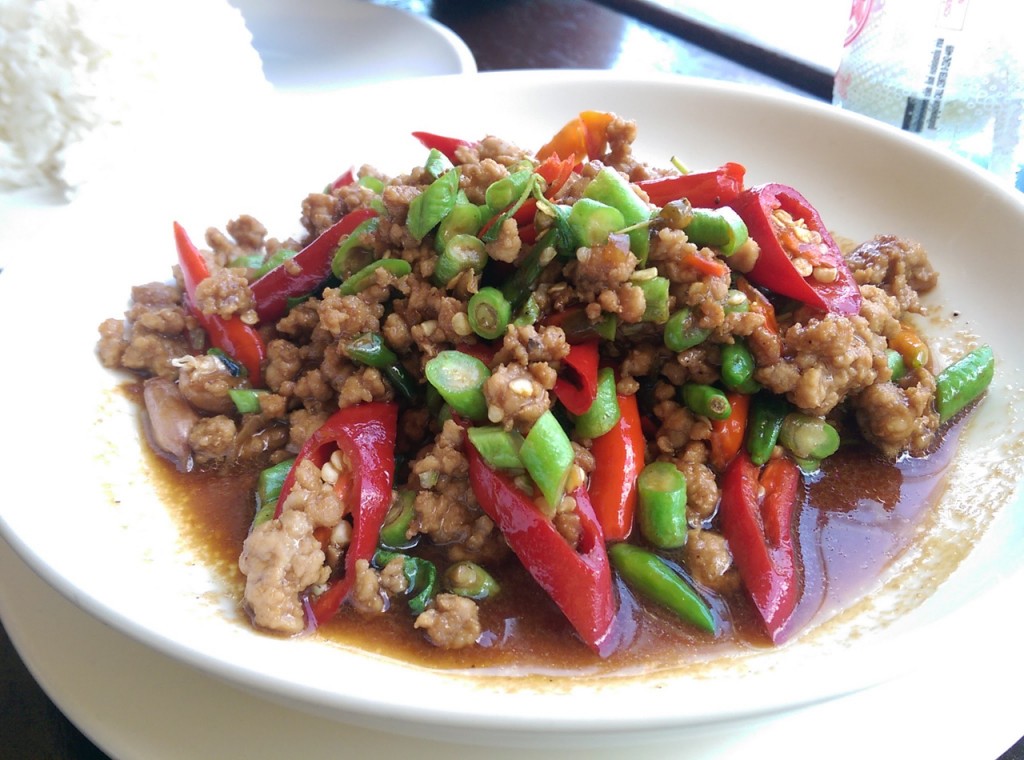 Pad Kaprow Moo (made with more long bean than basil, but still yummy). 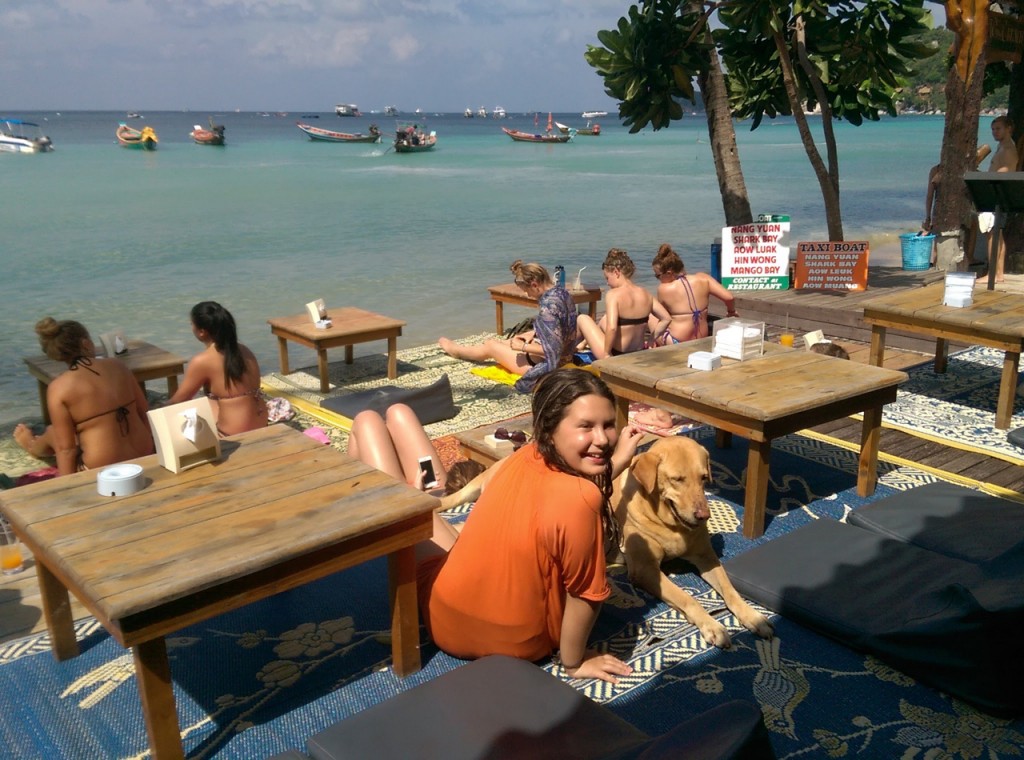 Jette and a friend at our favorite beachside restaurant. 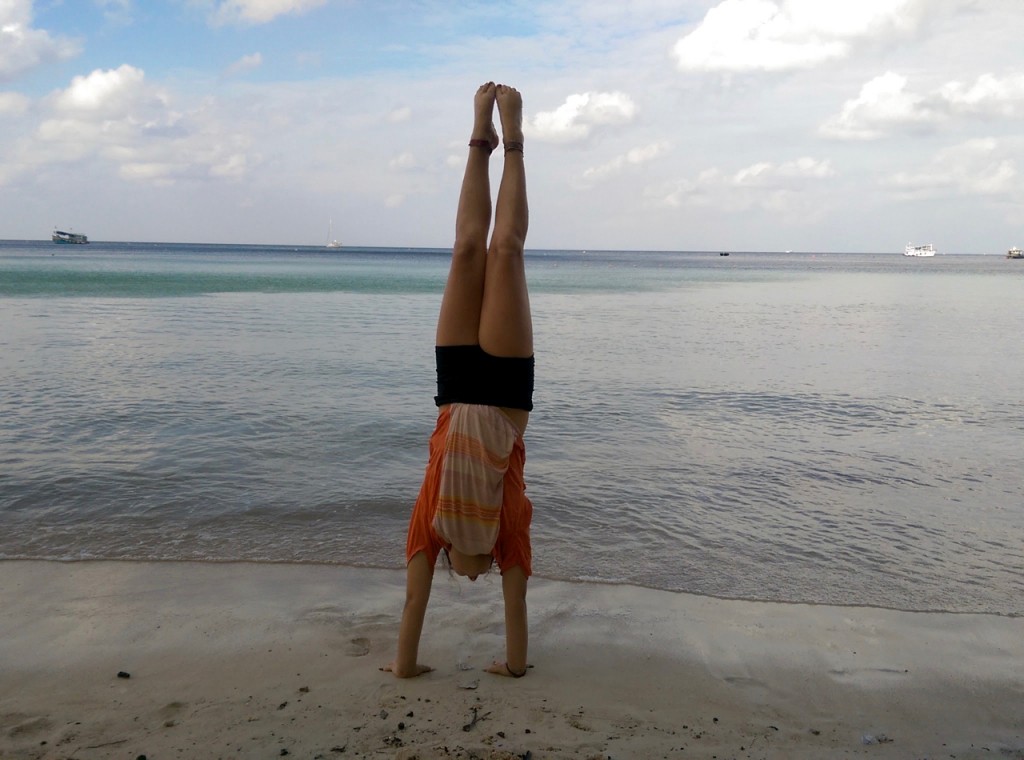 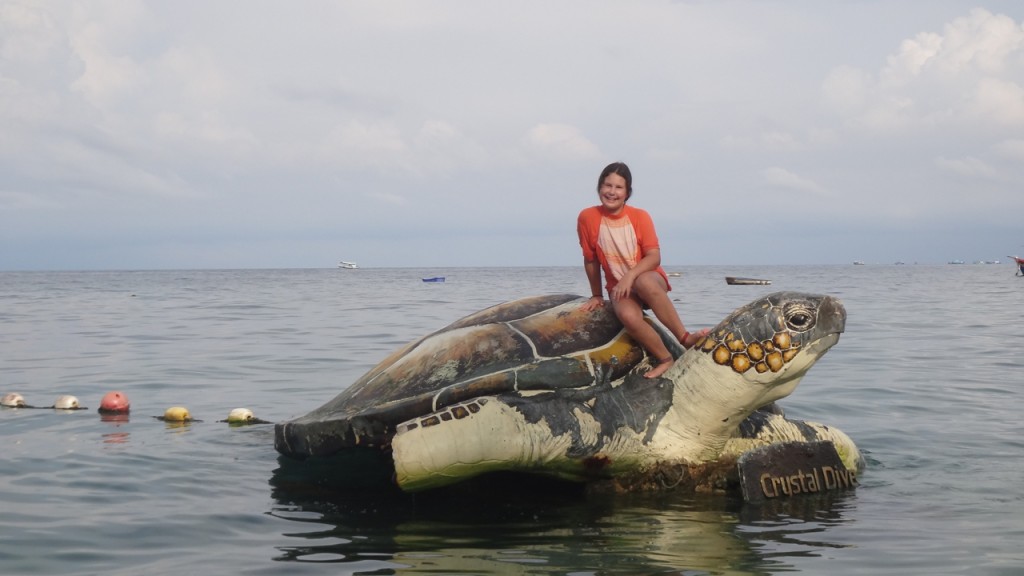 Jette on a turtle off Sairee beach 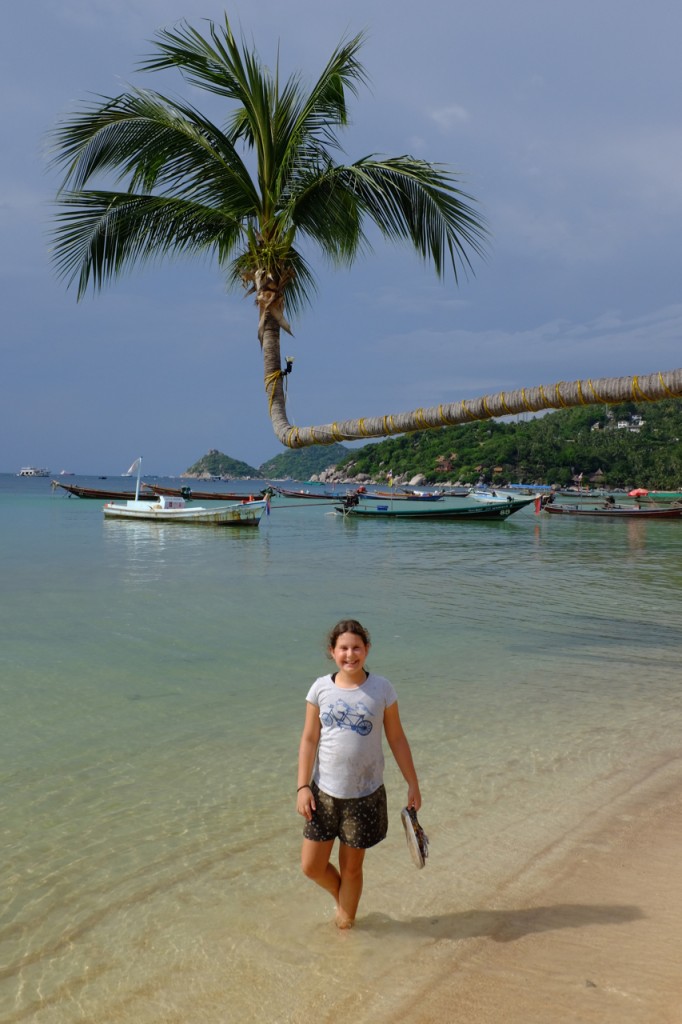 Jette and the bent palm. 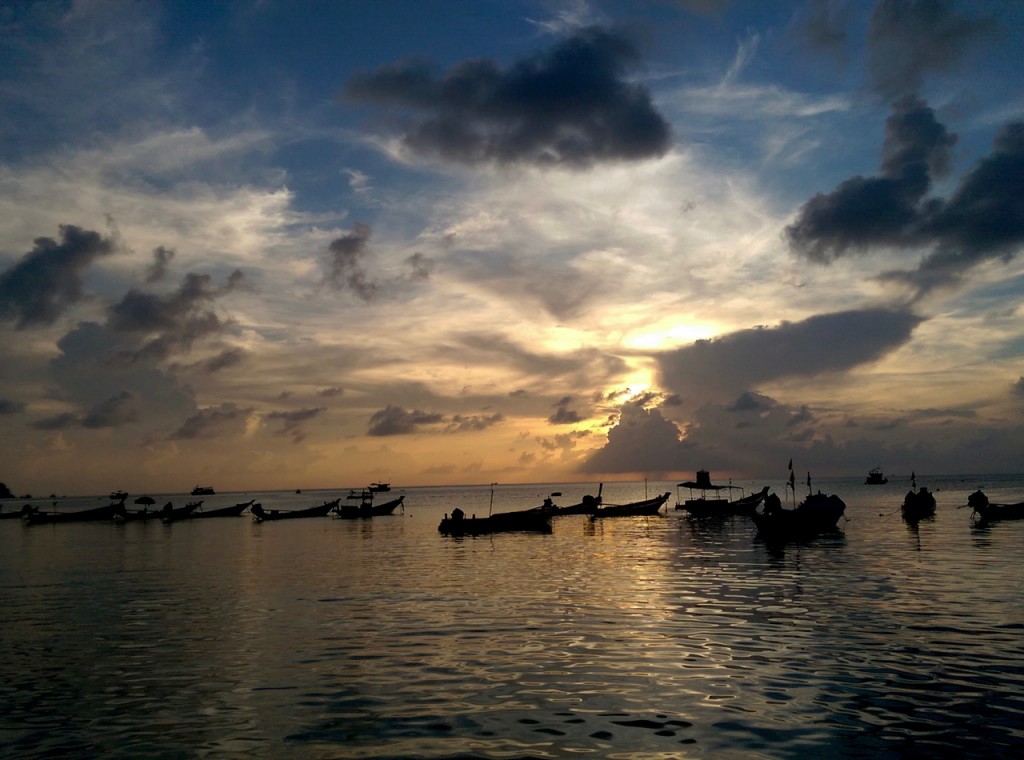 Sunset on our boat ride back from the beach.

The days went by quickly and pleasantly. Mila and I read quite a bit and researched some new business ideas, and Jette knocked out a lot of math, history, and writing. She’s doing great with her “school” work. We enjoyed swimming/snorkeling across the Mango Bay to the little beach and collecting shells and sea glass. 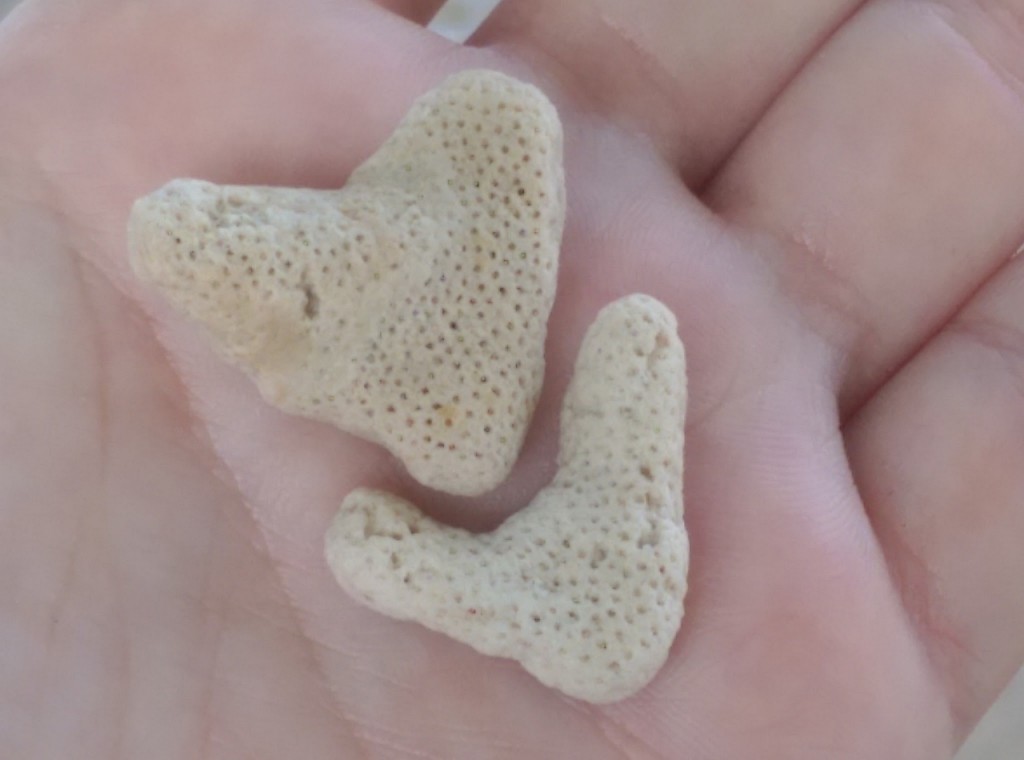 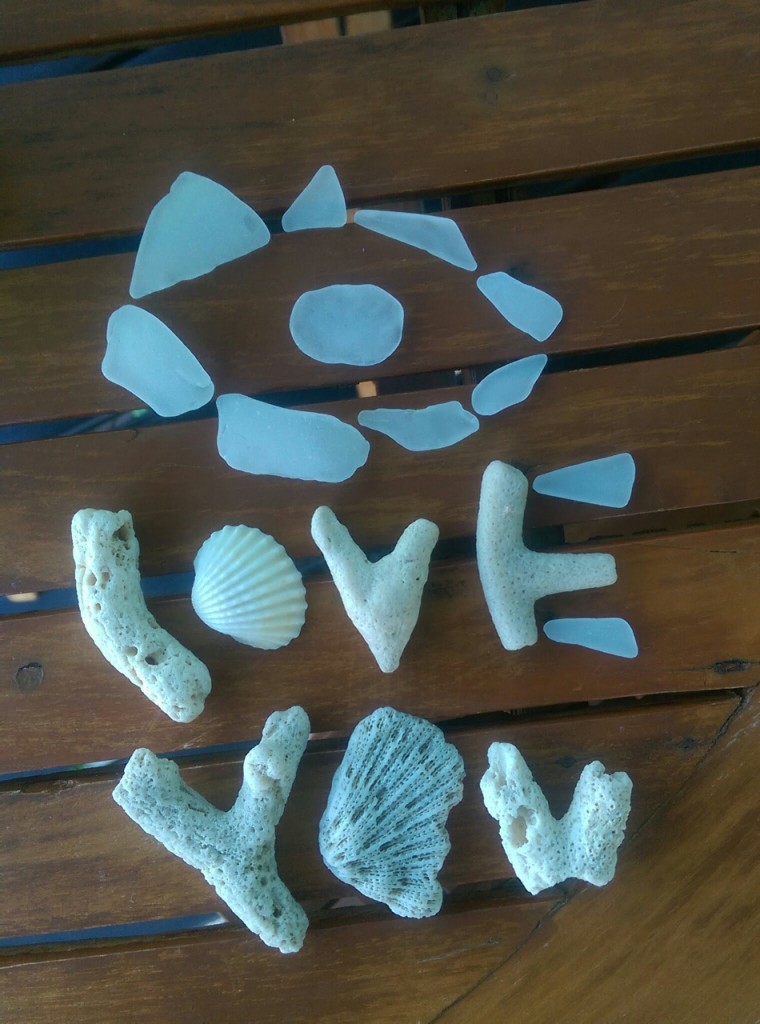 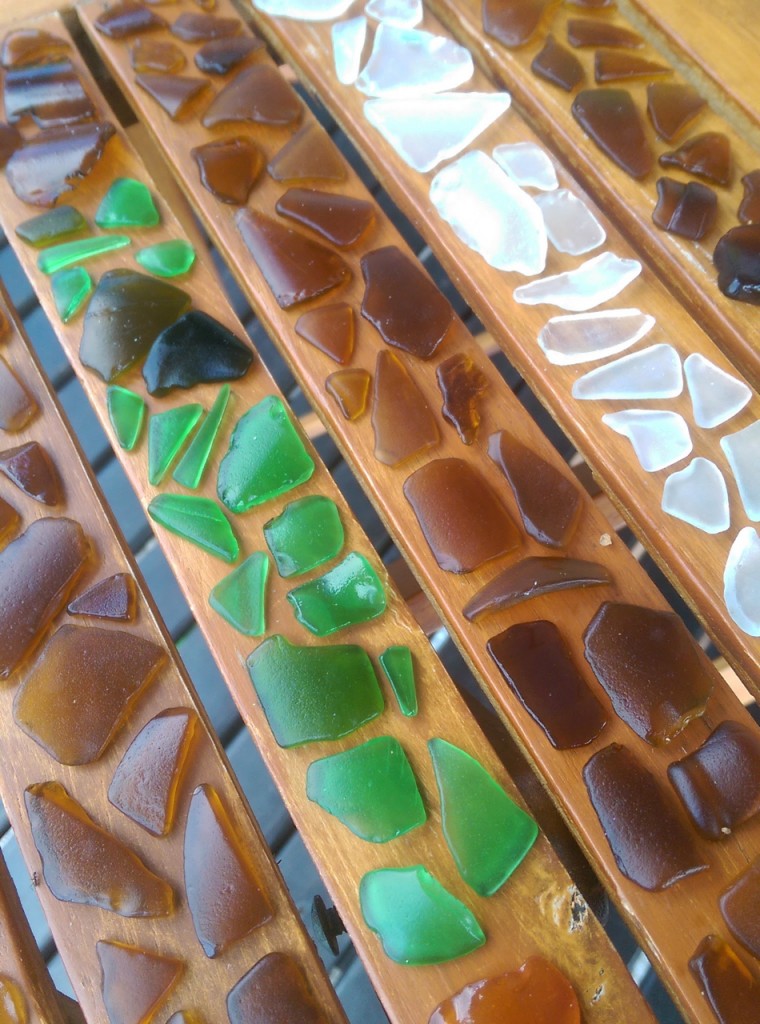 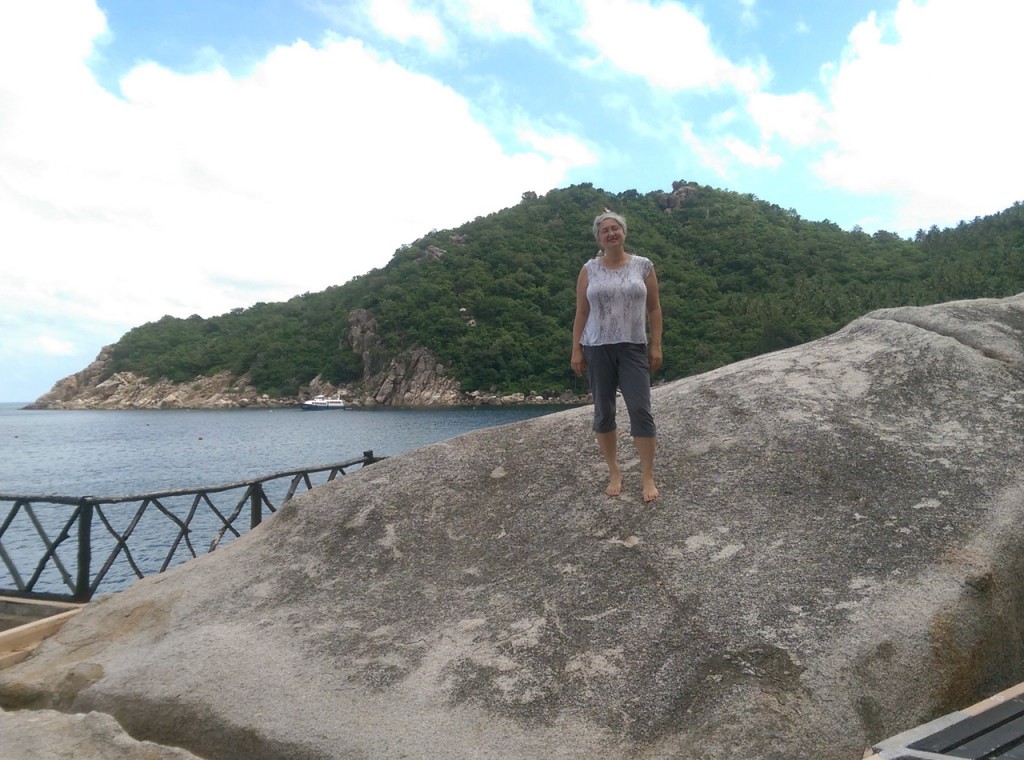 MIla standing on one of the boulders at the water’s edge. 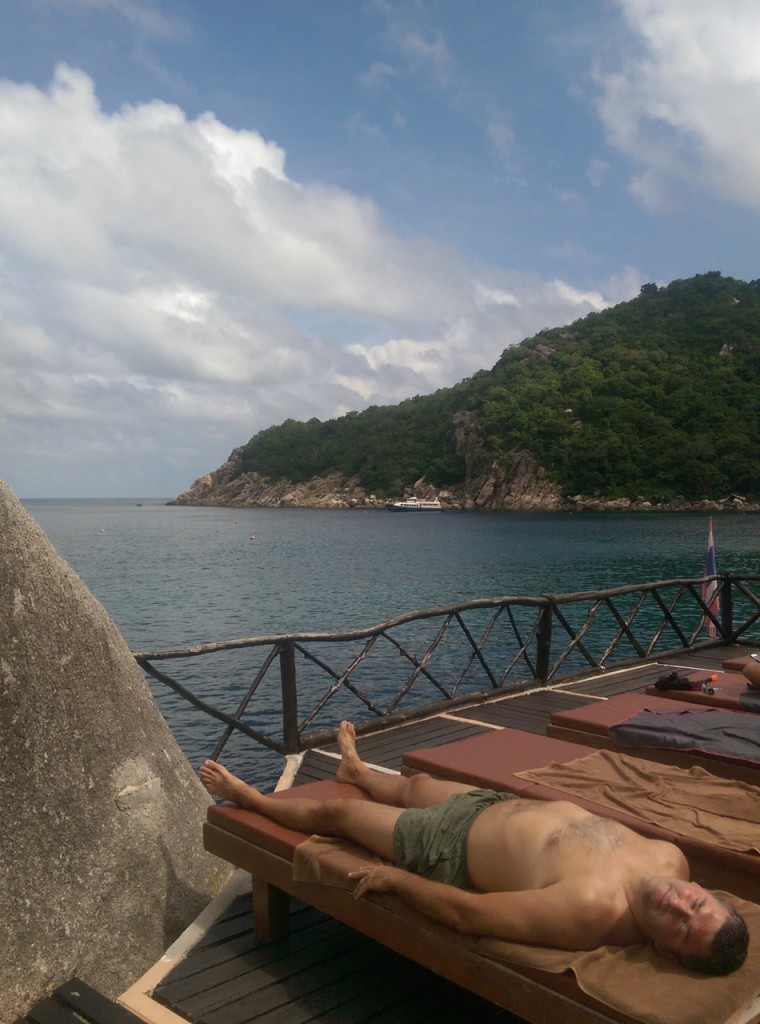 Drying off in the sun after a snorkeling session

The weather was good though we had a couple rainy days. The rain created little rivers that flowed down the mountain between the boulders and emptied into the sea. 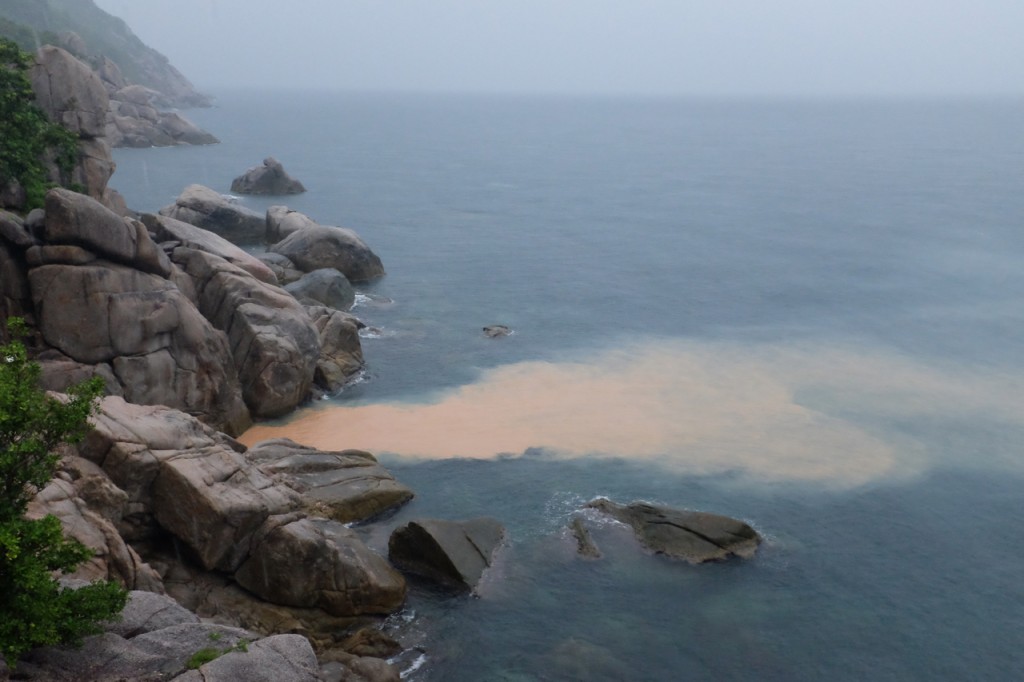 Rain washing soil into the ocean.

On the days after the rain the sea was a bit rough and the water a bit cloudy from all of the silt and soil that had washed in. Here’s a video shot on one of those days. Even with the cloudy water, you can see the abundance of sea life. You can also see the waves breaking against the stairs at the pier. They look small, but they are really powerful. Jette got bashed against the concrete stairs one day when she misjudged the waves. We quickly learned to respect the power of the ocean!

One day I made the mistake of jumping in before looking closely. It was right off the dock in a familiar spot, but this time I managed to jump into a school of jellyfish! I was stung all over my arms, legs, and torso. Before I realized what was happening, Jette jumped in after me. At first we didn’t see the jellyfish and couldn’t figure out what was going on. I said something like, “The water is making my skin burn. It feels like something is stinging me all over!”. It wasn’t until I got my head underwater and looked around, that I realized I was in the middle of a school of jellyfish. Luckily, Jette had jumped in at the edge of the school and got away with a single sting on her ankle. 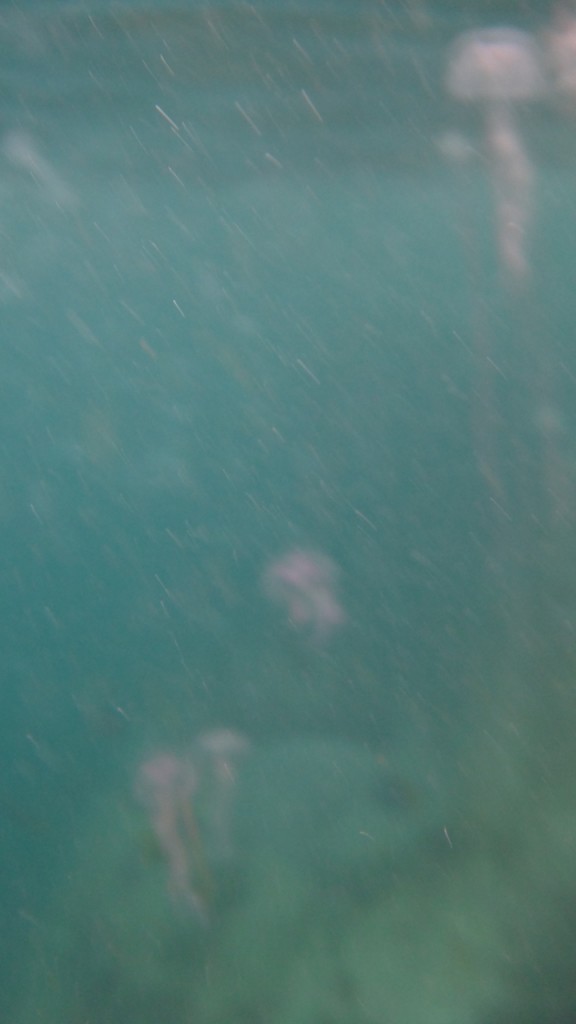 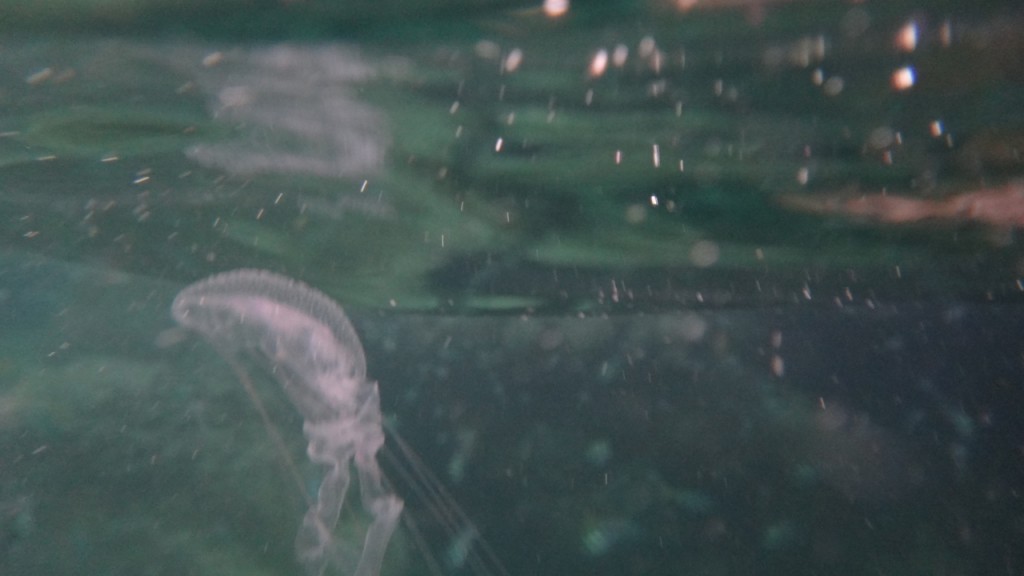 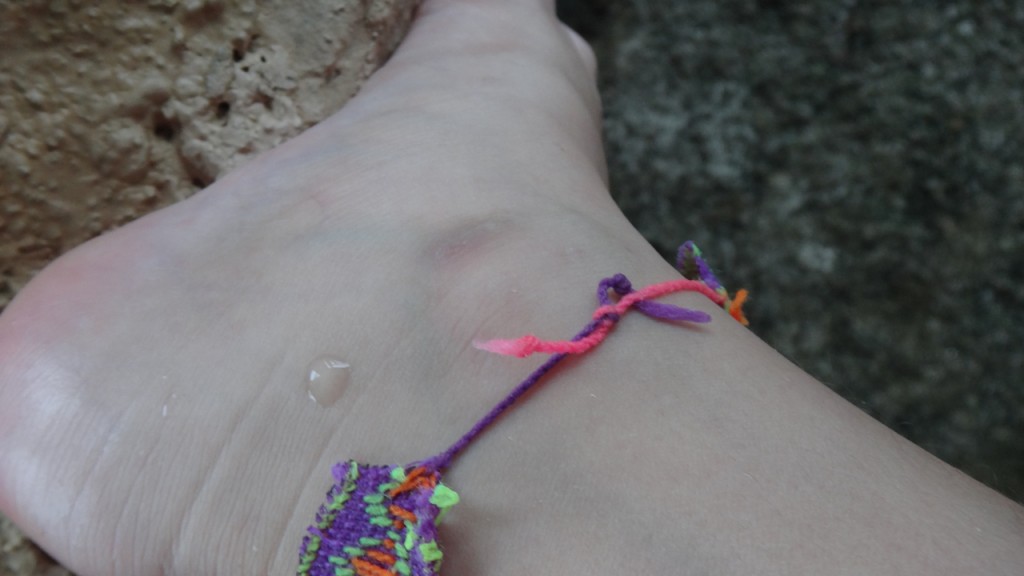 Needless to say we got out of the water as fast as we could! Jette’s body reacted to the sting more strongly than mine did, but none of the stings were serious. After a good, long, soapy shower (we didn’t have vinegar) the pain and discomfort was much diminished and we were almost as good as new. Needless to say, we didn’t do anymore swimming that day. The next day the jellyfish were nowhere to be seen.

On one of our trips into town we stumbled across a trapeze school. Our young adventurer was immediately taken with the notion of flying on that trapeze, so it was arranged. A couple days later Jette was taking her first steps up the tall, narrow ladder to the trapeze platform. Here’s a video of her very first go on the trapeze. Note that she can just barely reach the trapeze, it’s a stretch! Also the dismount from the net was a bit rough at the very end!

Here’s another video from a later “swing.” Look at how far it is up to that platform!

Jette says the trapeze was, “A little bit scary but it really fun.” She definitely has an adventurous streak. Yesterday after she finished her work, she was watching YouTube videos on the Cirque du Soleil audition process!

All in all Koh Tao was great. The trapeze and swimming were excellent exercise and a refreshing change of pace. I’d been missing the exercise we were getting when we were on bikes in Europe. Here in Asia we’ve been walking a lot (and sweating a lot, LOL!) but the intensity just isn’t the same. The swimming and snorkeling worked some muscles we hadn’t worked in a while and felt really good! We’ve spent a lot of time lately in crowded, busy, noisy cities. The quiet remoteness of Mango Bay was refreshing. We found great pleasure in just listening to the waves, watching the moon rise, and looking at the stars. 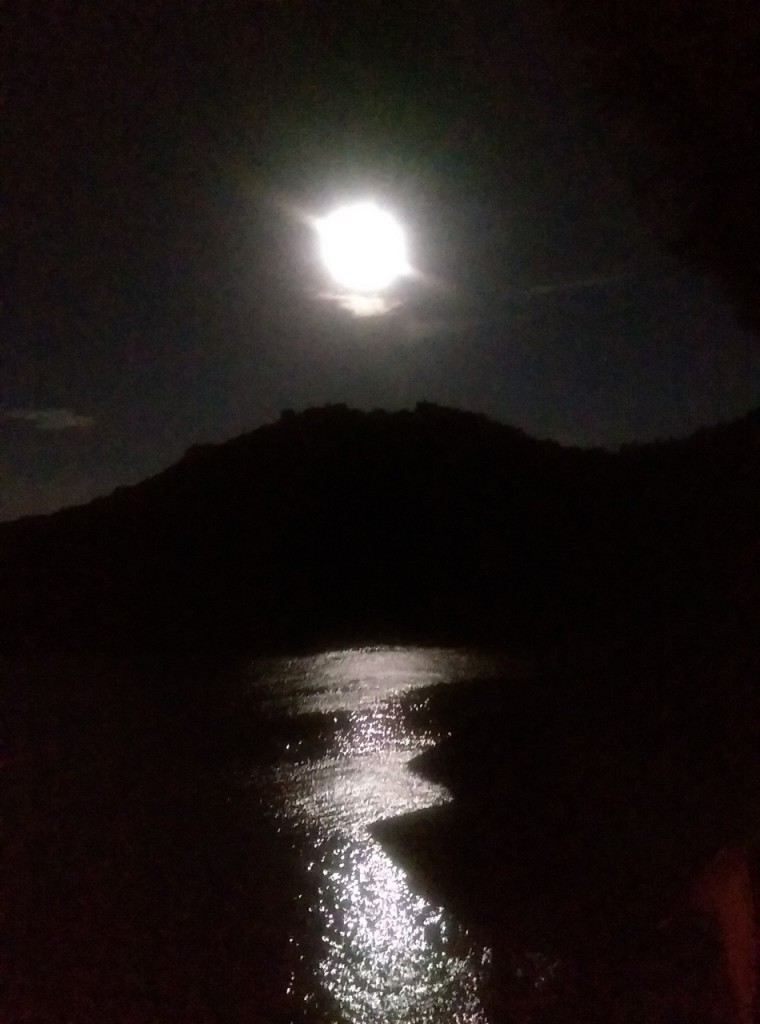 View of the full moon from our balcony