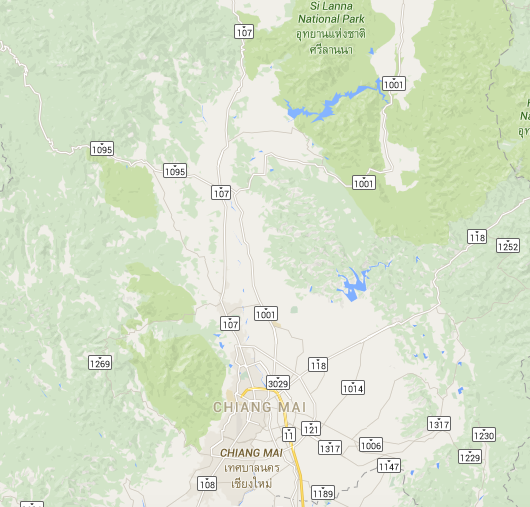 About an hour and half North of Chaing Mai is Si Lanna National Park. In the park is a large lake called Mae Ngat Somboon Cham, known to many of the locals as “The Dam.” It is a bit off the beaten path and we thought it would be a nice escape for a few days. We called around and found a “floating guesthouse” with an opening, hired a songthaew, and headed North.  We didn’t know quite what to expect. 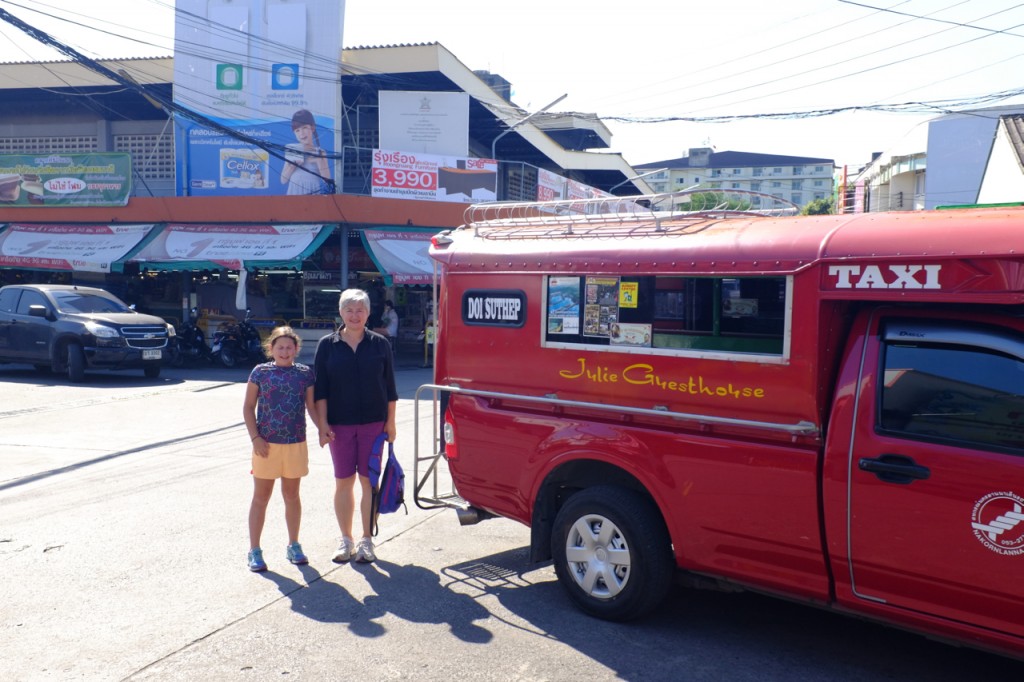 On the way out of town we stopped at a market for a few provisions. We’d read that food at the lake was quite basic and thought it would be good to take some fruit and snacks just in case. 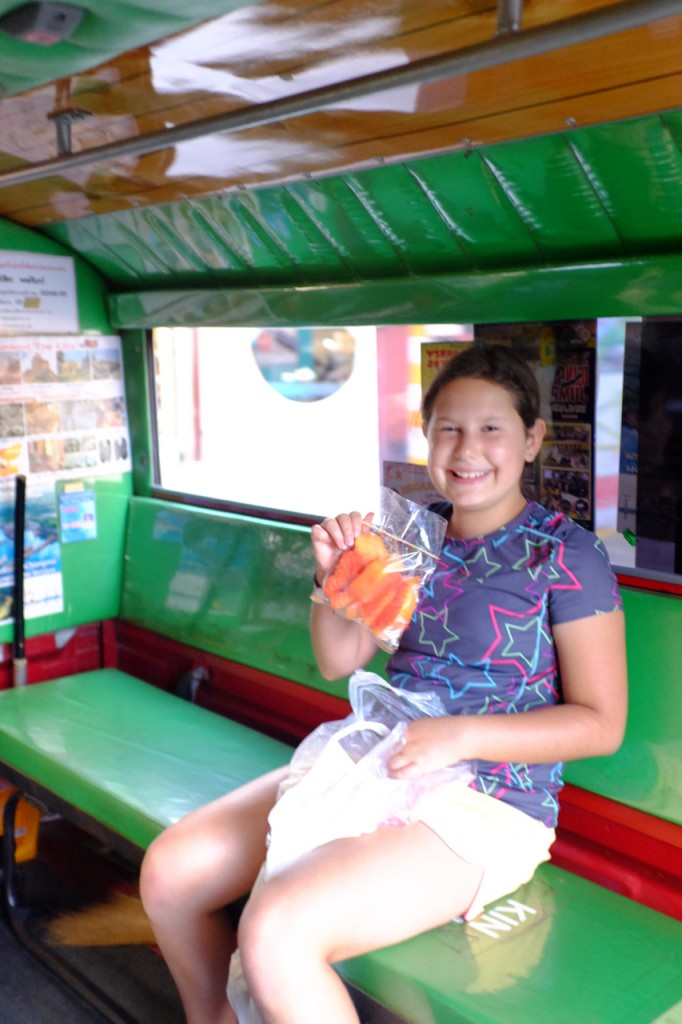 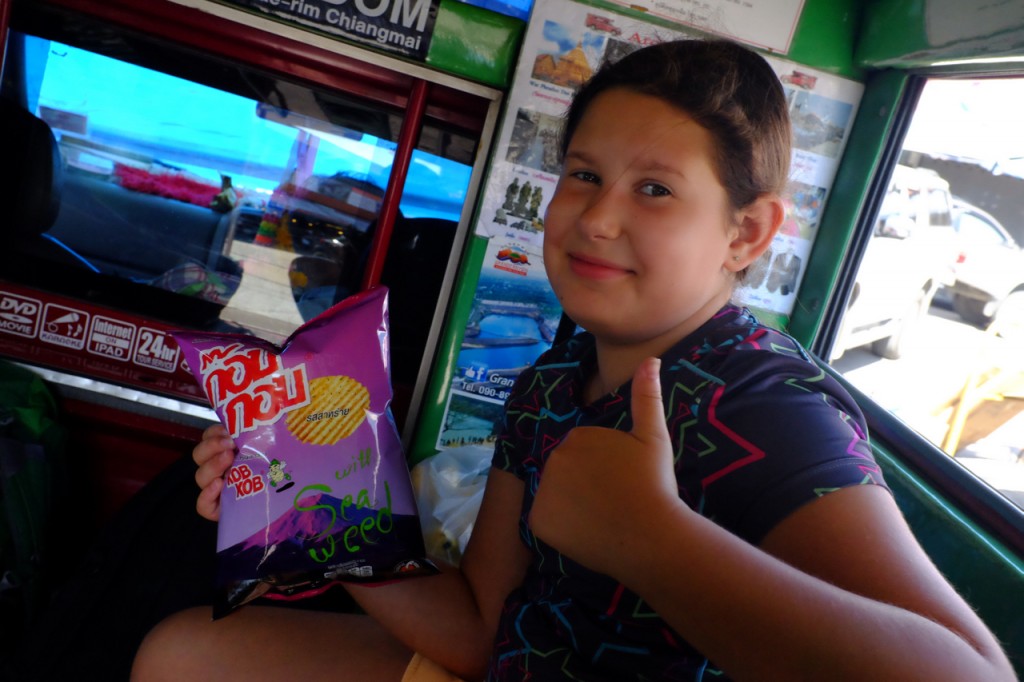 We arrived at the lake. The songthaew stopped right next to the dam in an area where the longtail boats dock for passengers and supplies. We unloaded our stuff and when our songthaew driver told the guys gathered the name of our floating guesthouse, one of the boat drivers came forward and led us to his boat. 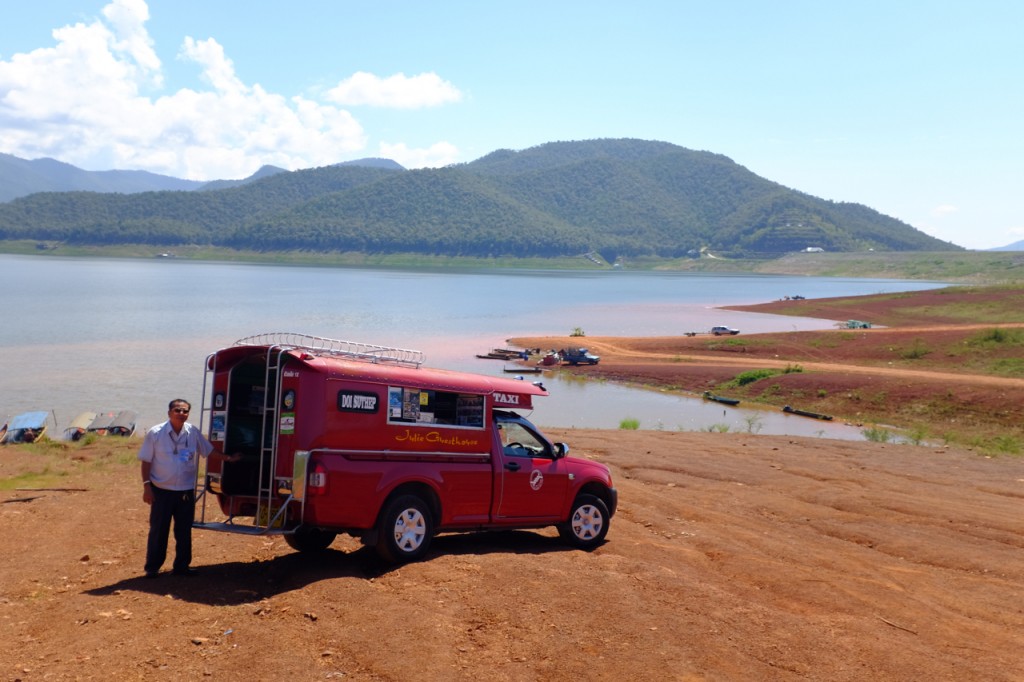 Our songthaew and driver 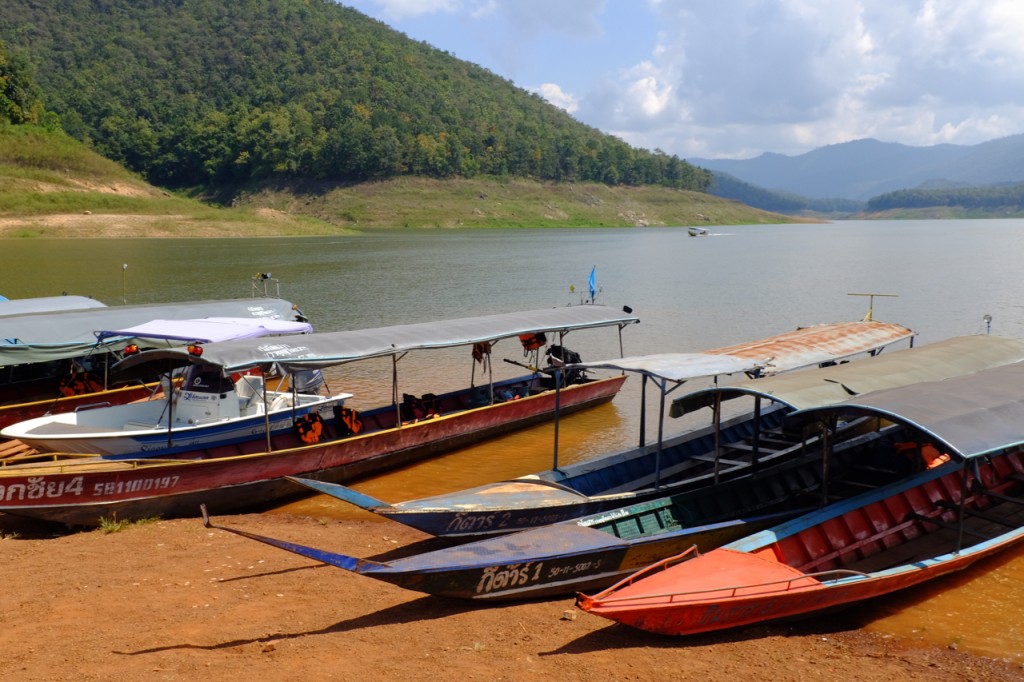 Longtail boats at the lake 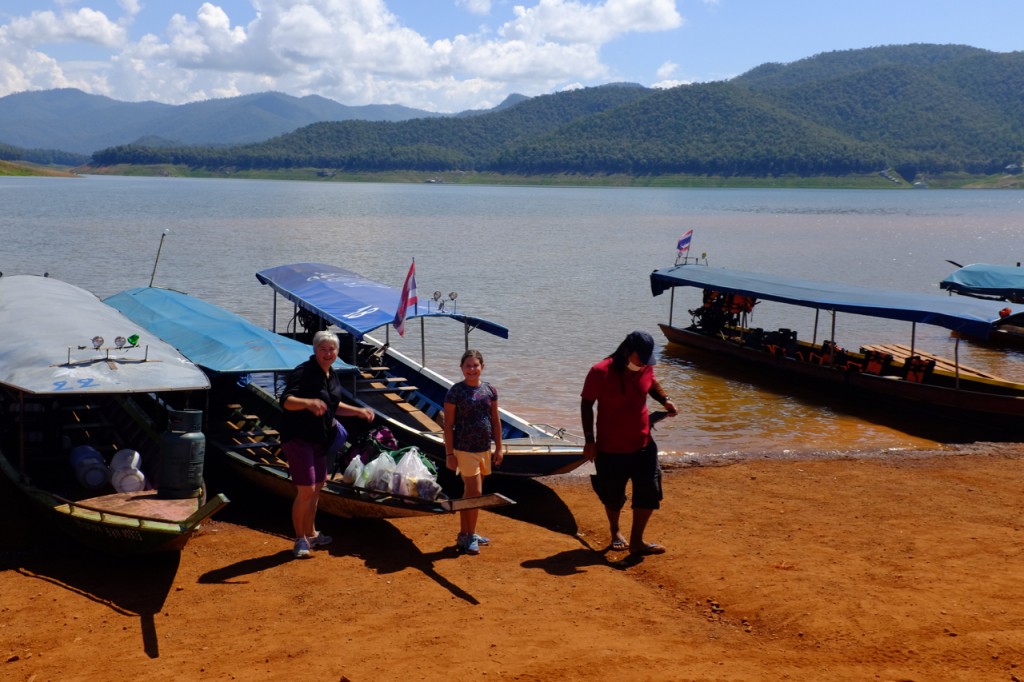 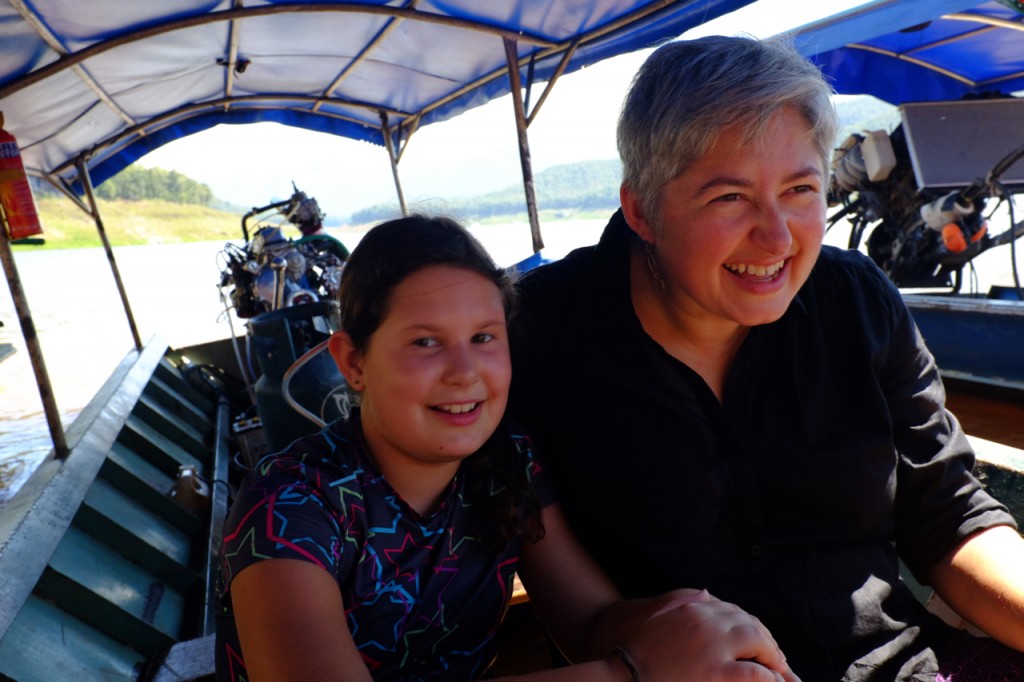 We hopped in and away we went across the lake. Ten or fifteen minutes later we pulled up to a group of floating structures – our home away from home.

Here’s a rough video of the trip. Of course the camera battery died just as we arrived at the floating guesthouse. We need to get a new battery.

We unloaded our stuff and checked in with the lady that ran the joint. No one spoke English, which was fine with us. There were about a half-dozen thatched “huts” with tin roofs floating on wooden platforms or decks. They were all linked by wooden decks. At one end was the office/restaurant which was essentially a big covered porch. We were the only gringos. The other rooms were occupied by Thai families or groups of young Thais. 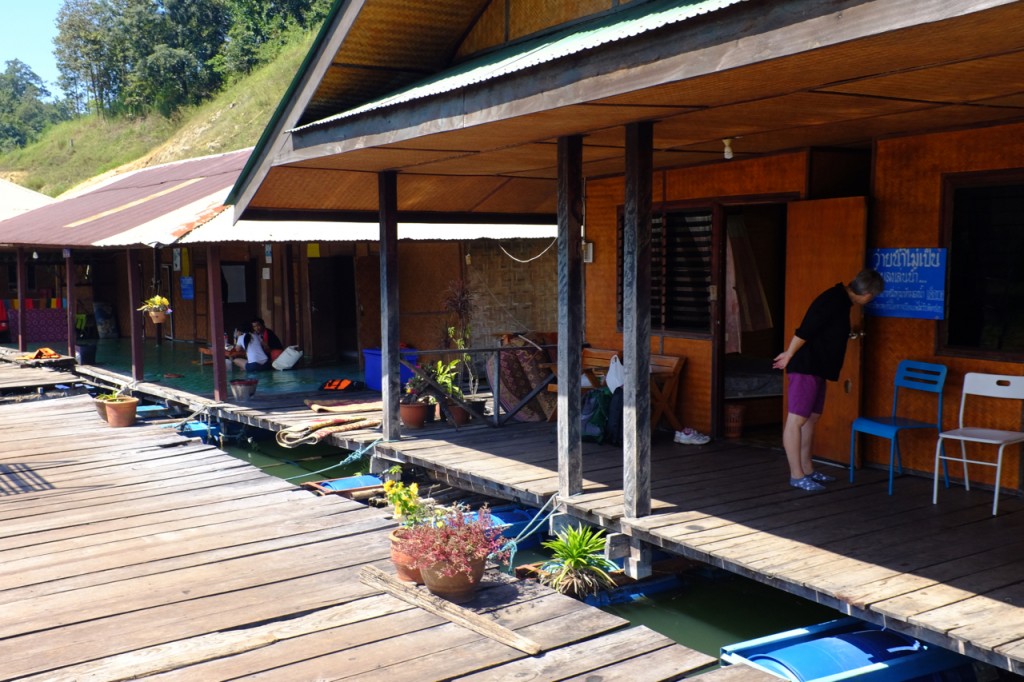 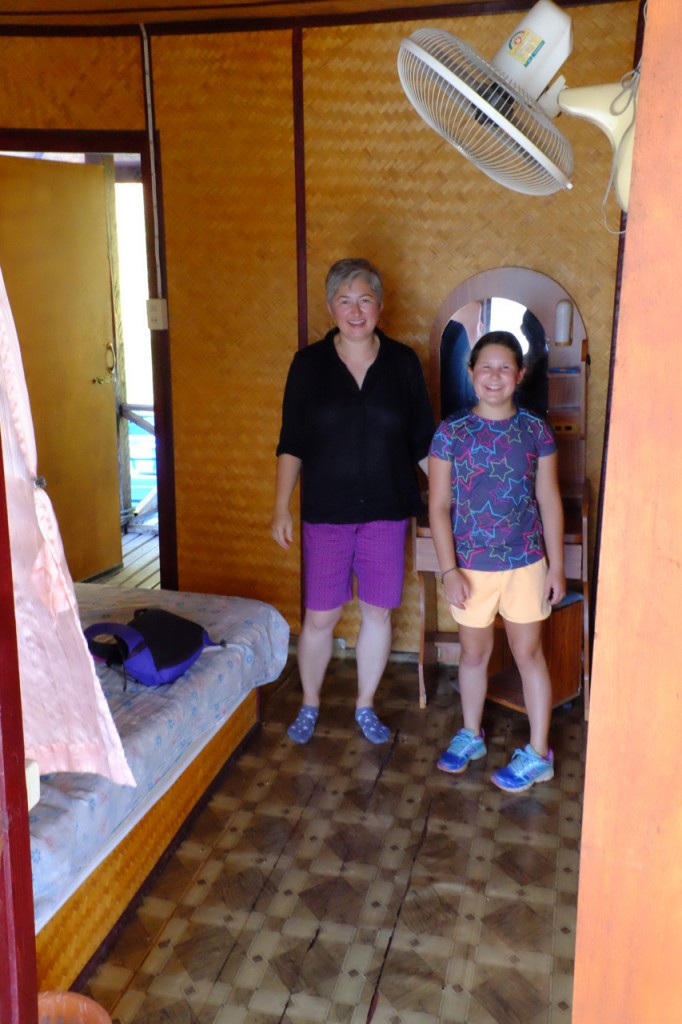 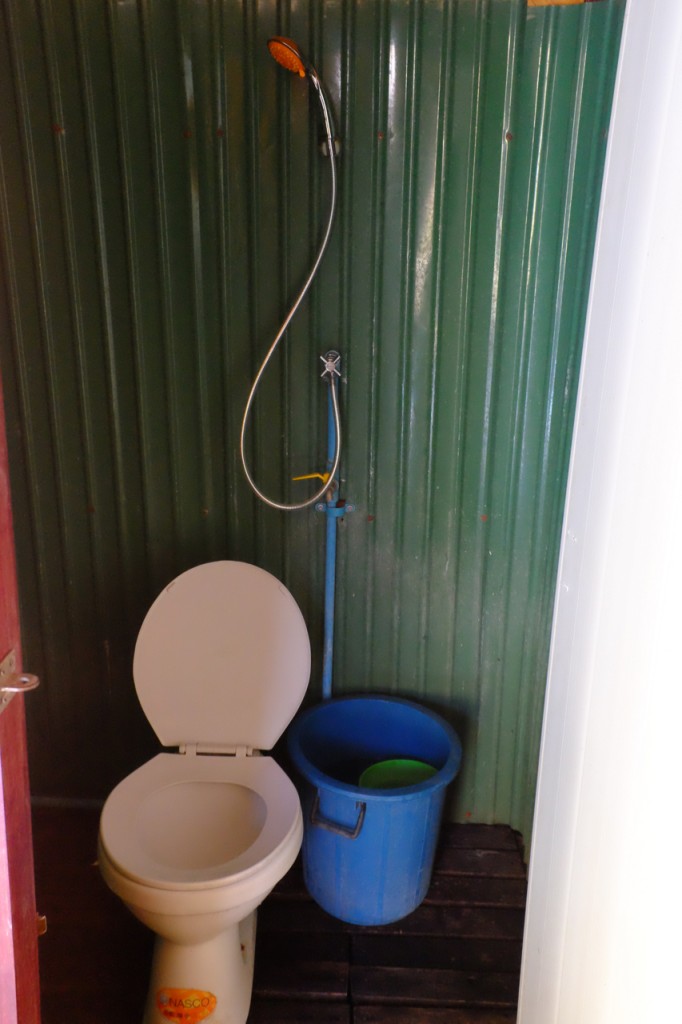 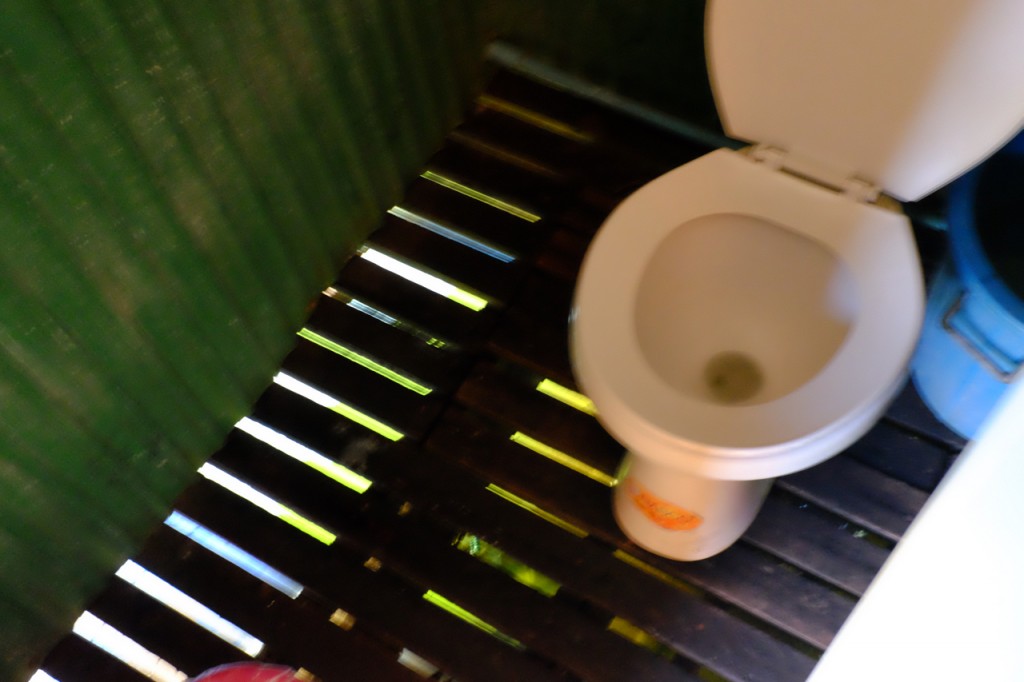 We could see the water through the slats of the bathroom floor. It did look like there was a tank beneath the toilet. That was good. Water for the shower and the flush bucket was from the lake. I never used the shower, I just jumped in the lake!

The facilities were very basic but clean, and hey, this is what they should be like on a lake in a national park in Northern Thailand. These are the local rustic cabins! 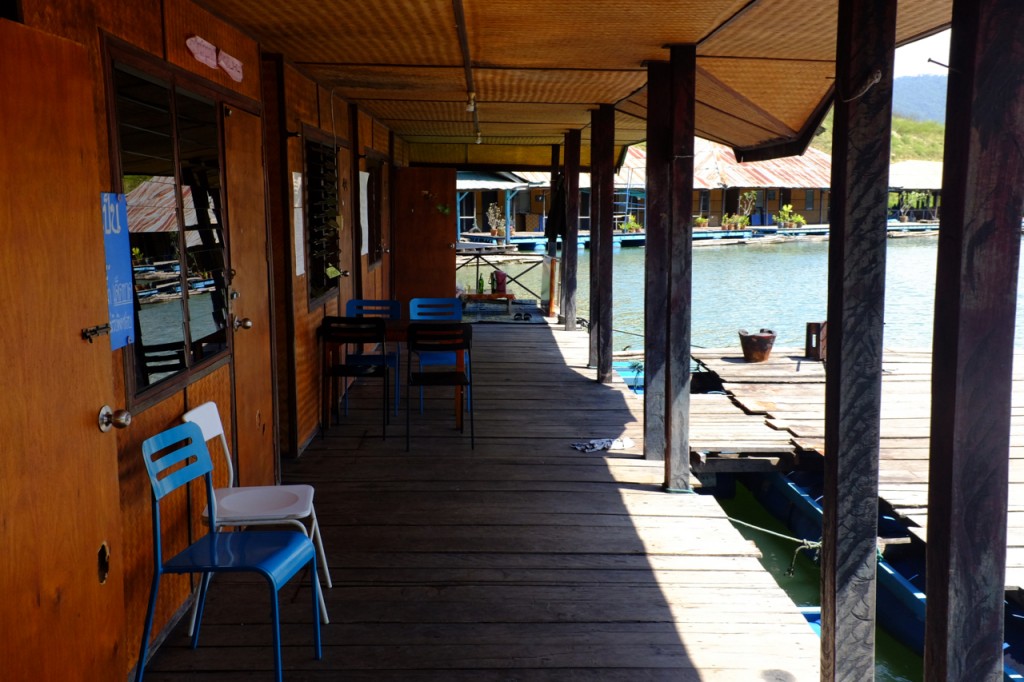 View of other rooms from our porch 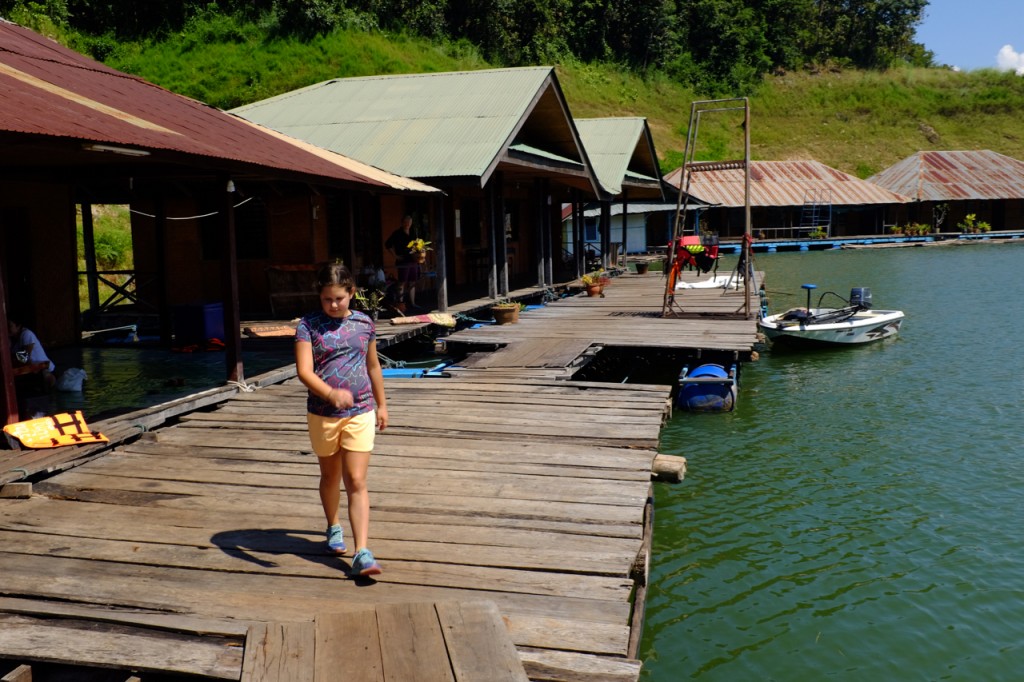 The walkway connecting everything 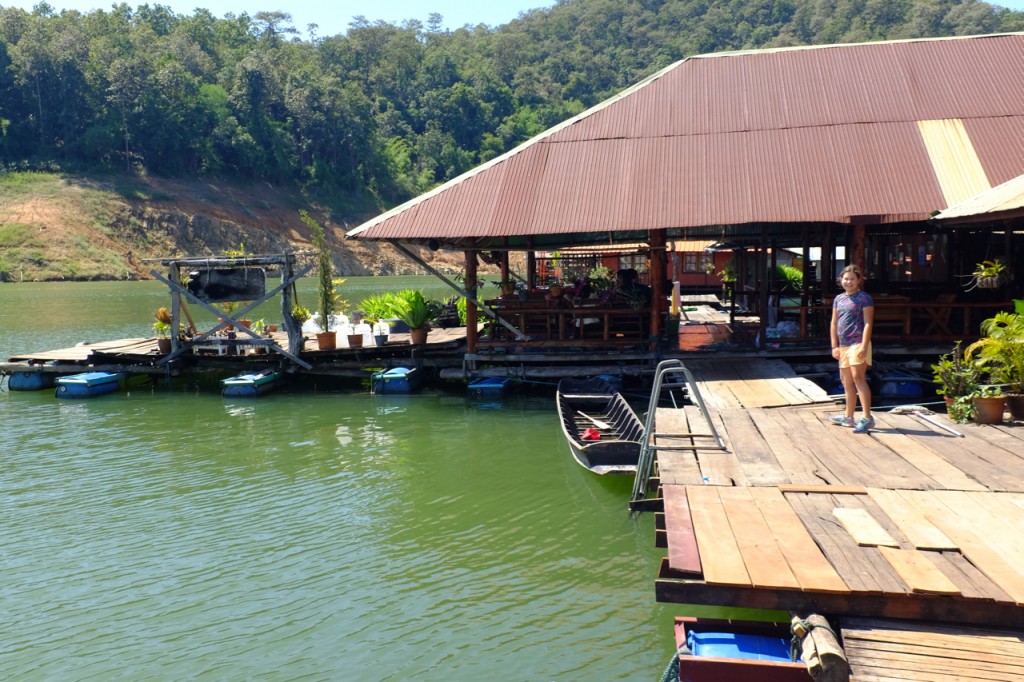 Jette standing by the restaurant 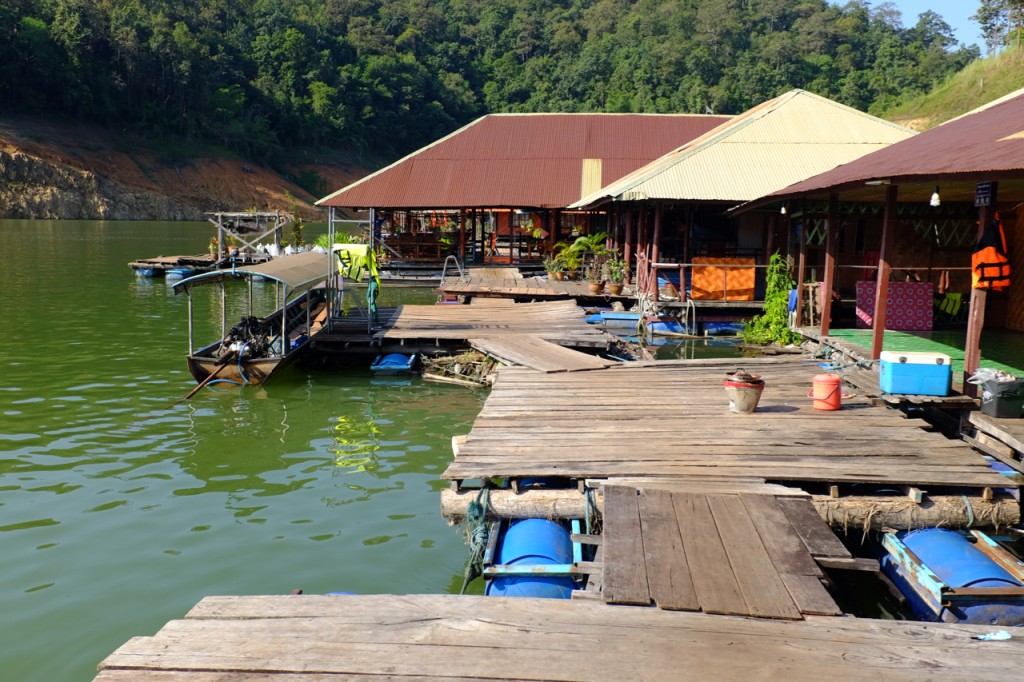 The view down to the restaurant 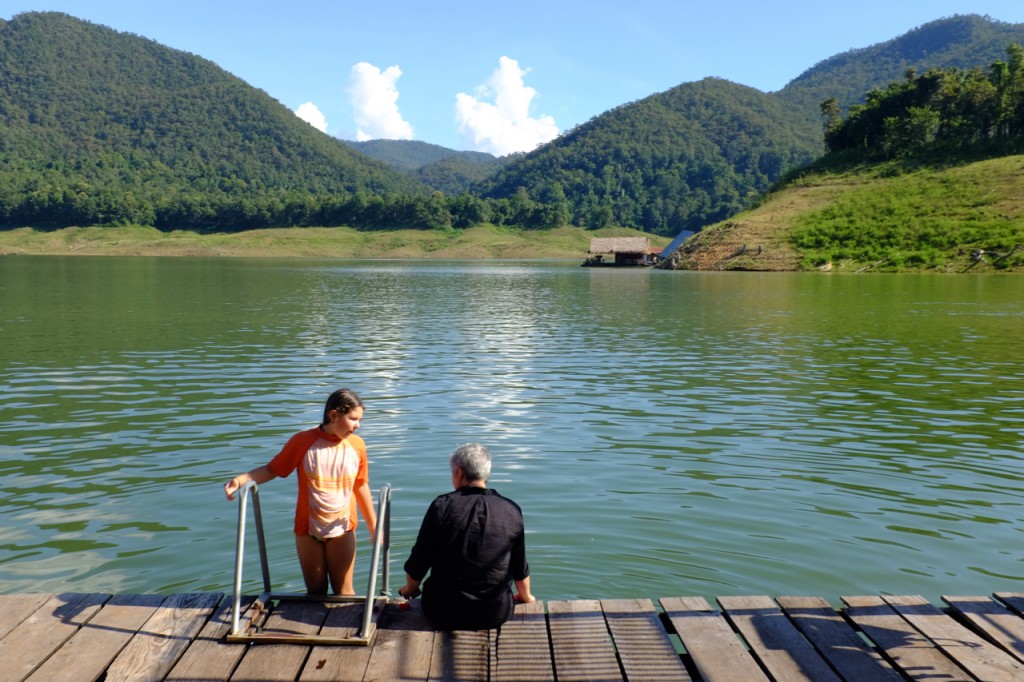 We could swim right off the deck in front of our room, and the water temperature was perfect. The water was green and somewhat clear. You could see about 4 feet before the green haziness obscured everything. We saw lots of minnows and some bigger fish, but no giant snakeheads, and nothing nibbled our toes. 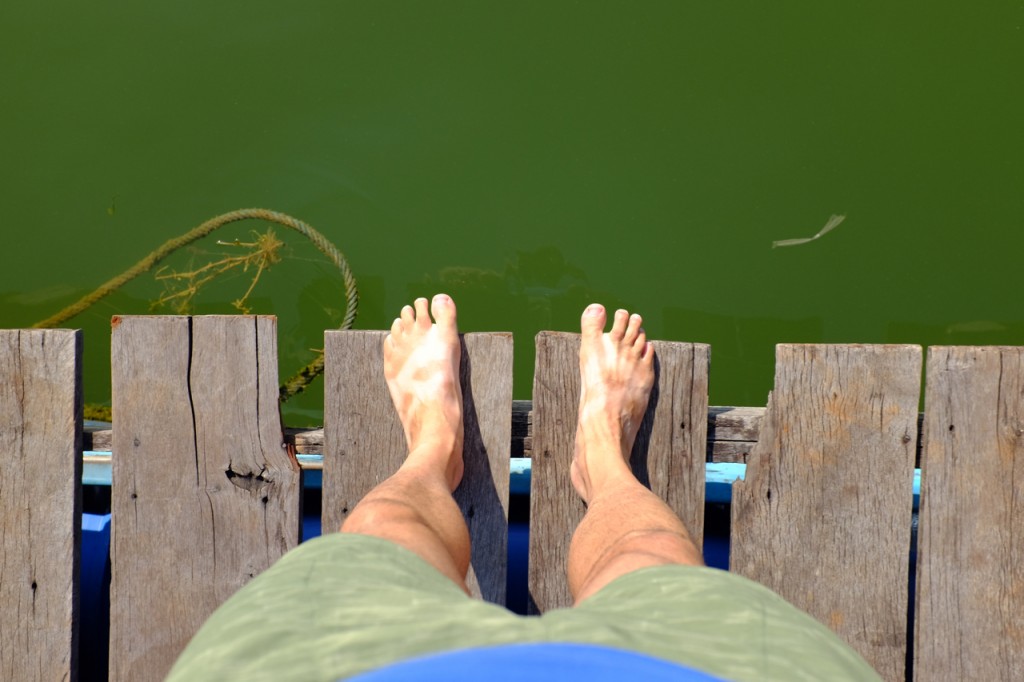 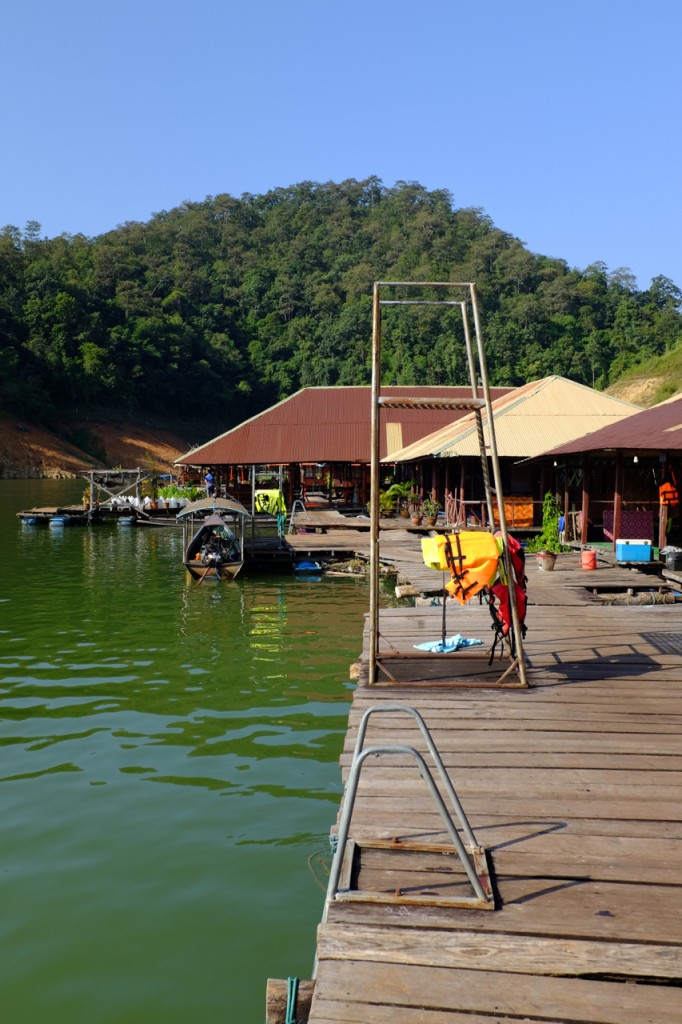 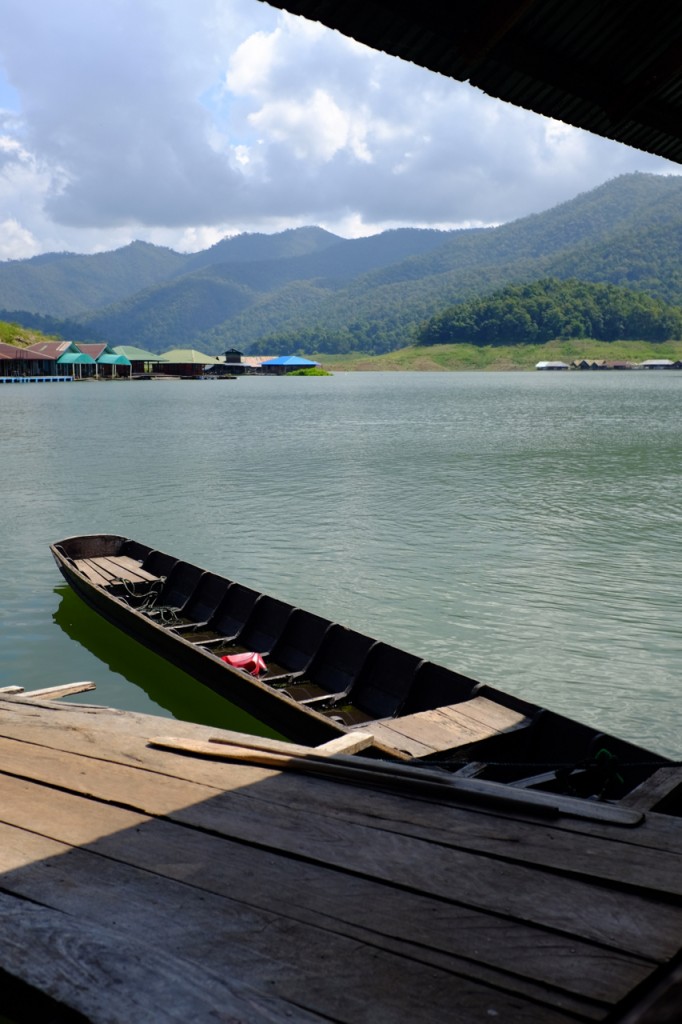 The restaurant had a selection of basic dishes, centered mostly around local fish. Our favorite was the fish fried with garlic. It was tasty, especially with the lime and hot chilli sauce. We ended up eating it at almost every meal! 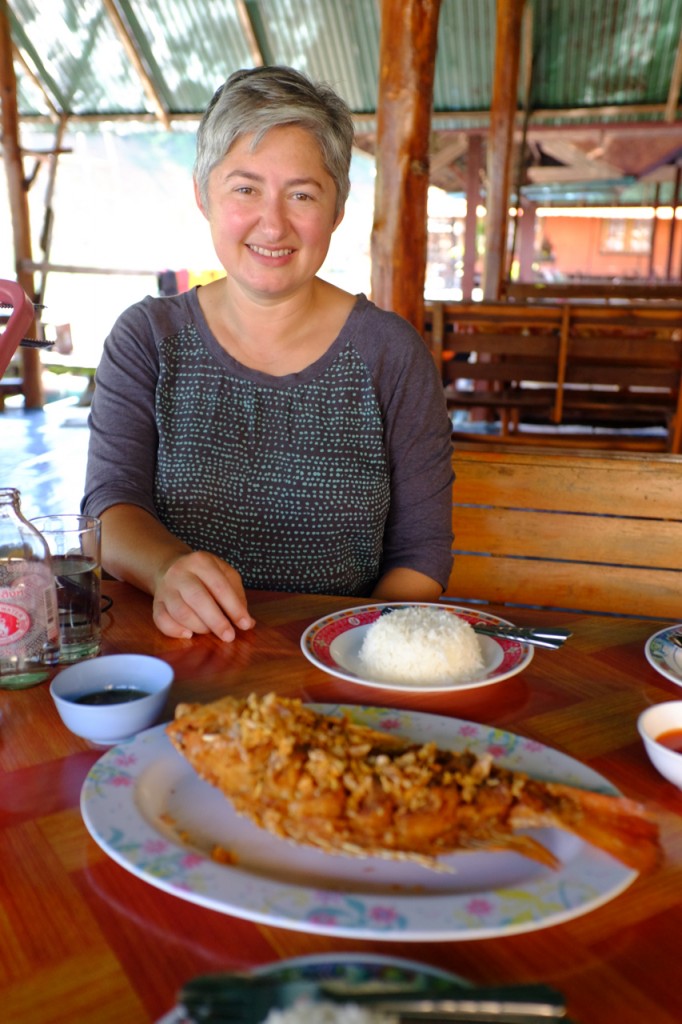 We relaxed, swam, ate, paddled around in the canoe, read, and did some math. 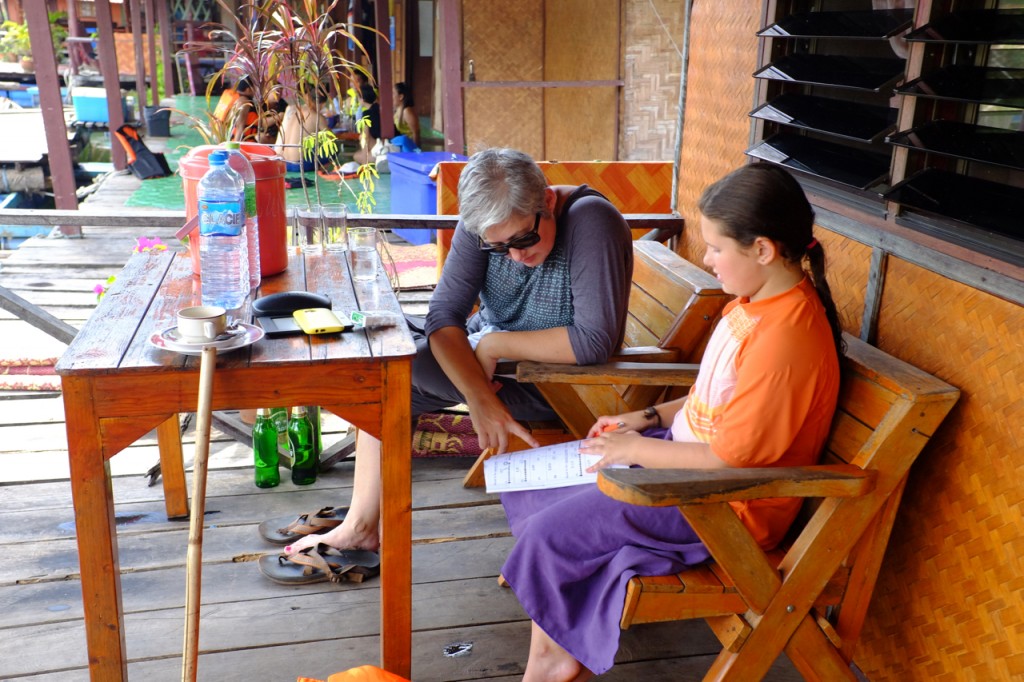 On the second day, we heard voices, kids voices, speaking English. They were coming from another group of guesthouses, next door, so we jumped in the canoe and went to see who it might be. We paddled over and met a couple of really nice Kiwi families who live in Chiang Mai. They too had come to the lake for a couple days of fun and relaxation. Mila and I enjoyed visiting with them, and Jette spent the rest of the day playing with her five new friends. They had a blast, and we barely saw Jette again until sundown! 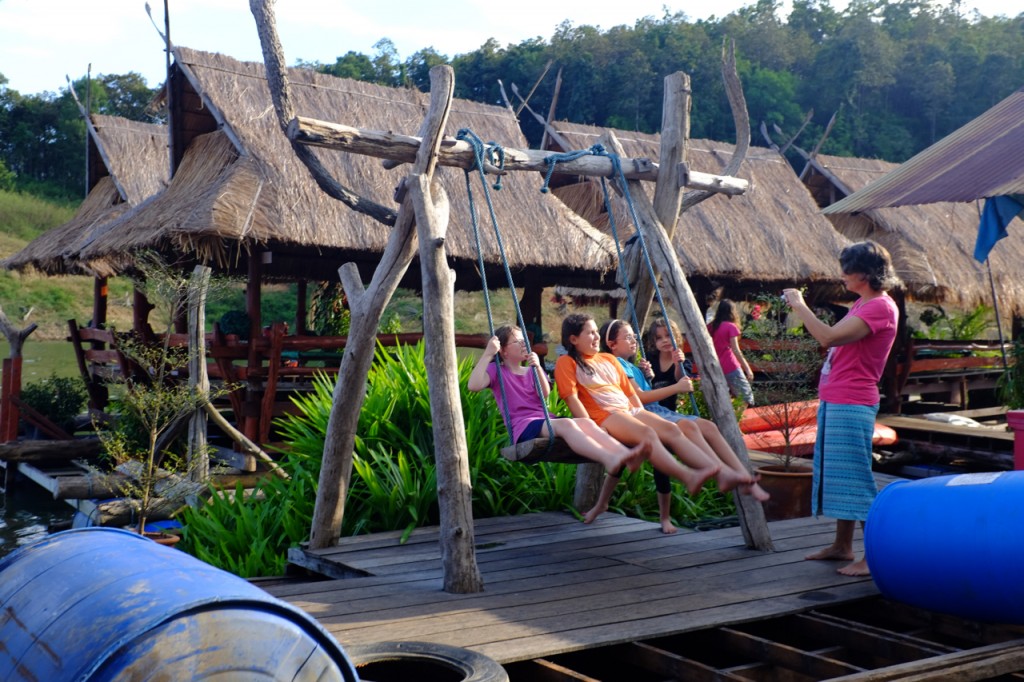 Fun with the Kiwis

Jette had wanted to jump off the high dive but had been too apprehensive to do it. With her new friends encouraging her, she quickly conquered that fear! I happened to catch it from a distance: 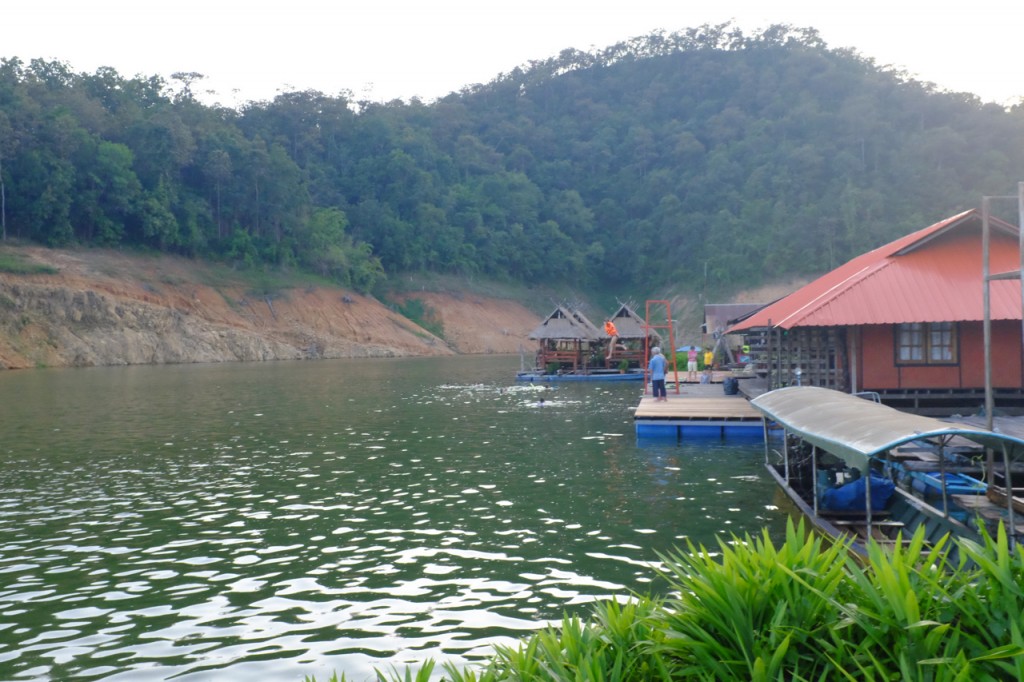 Jette does the high dive.

The kids also had a fun time finding frog eggs, which to be found in long, gelatinous tubes stuck to the floats of the guesthouses. 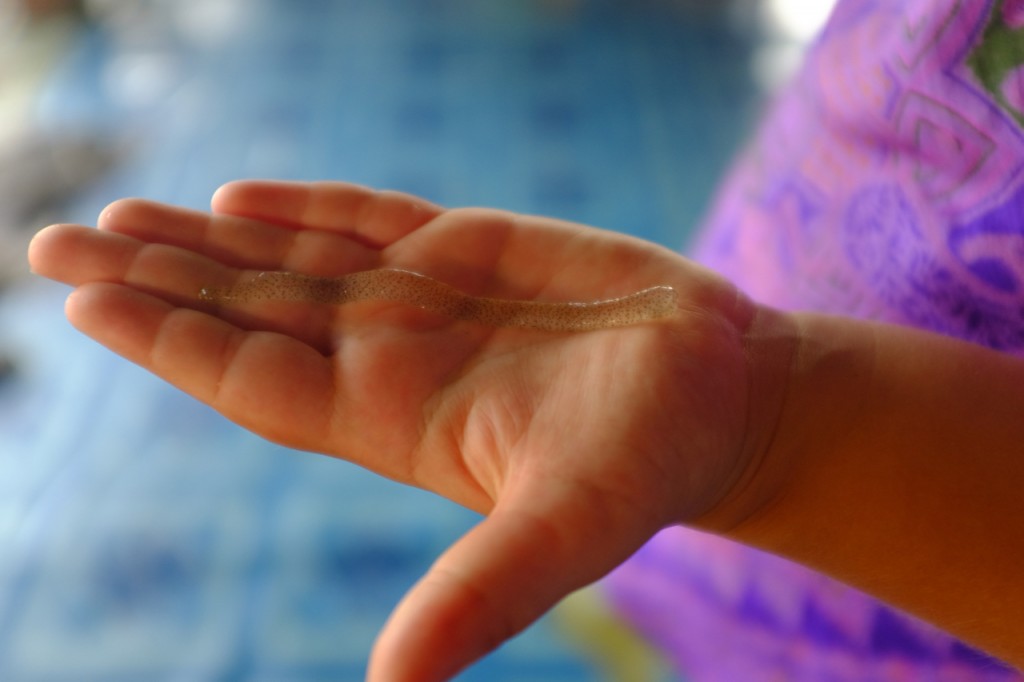 Aside from swimming or the canoe, the only way to cross from their guesthouse and our guesthouse was to climb along the edge of one the buildings and then cross on a “balance beam” of loosely lashed, wiggly bamboo. It was a bit of an adventure going back and forth. 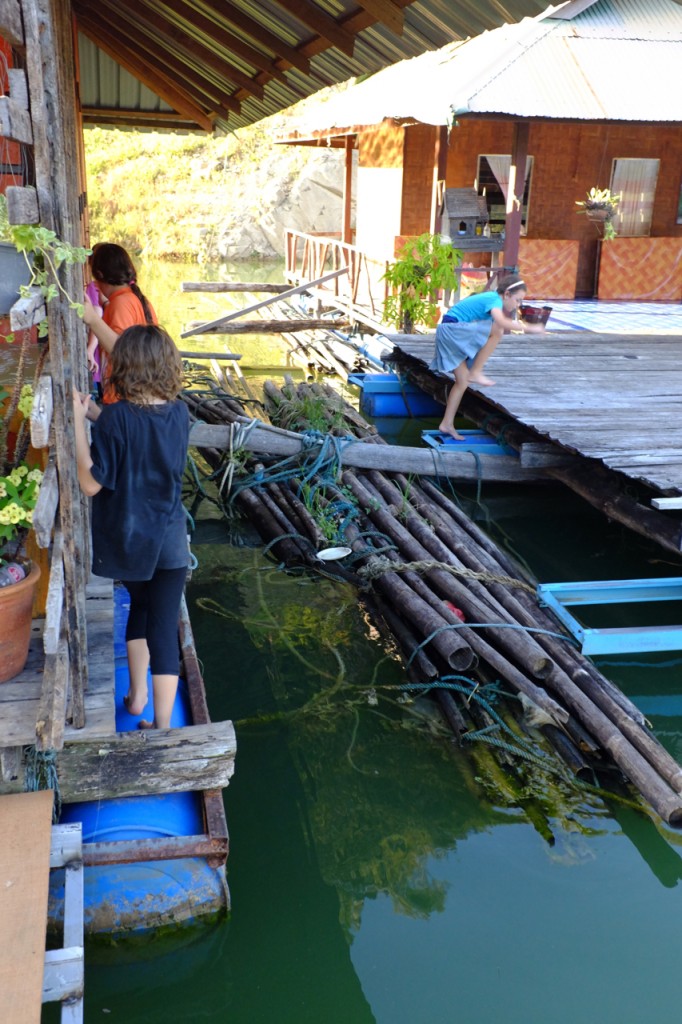 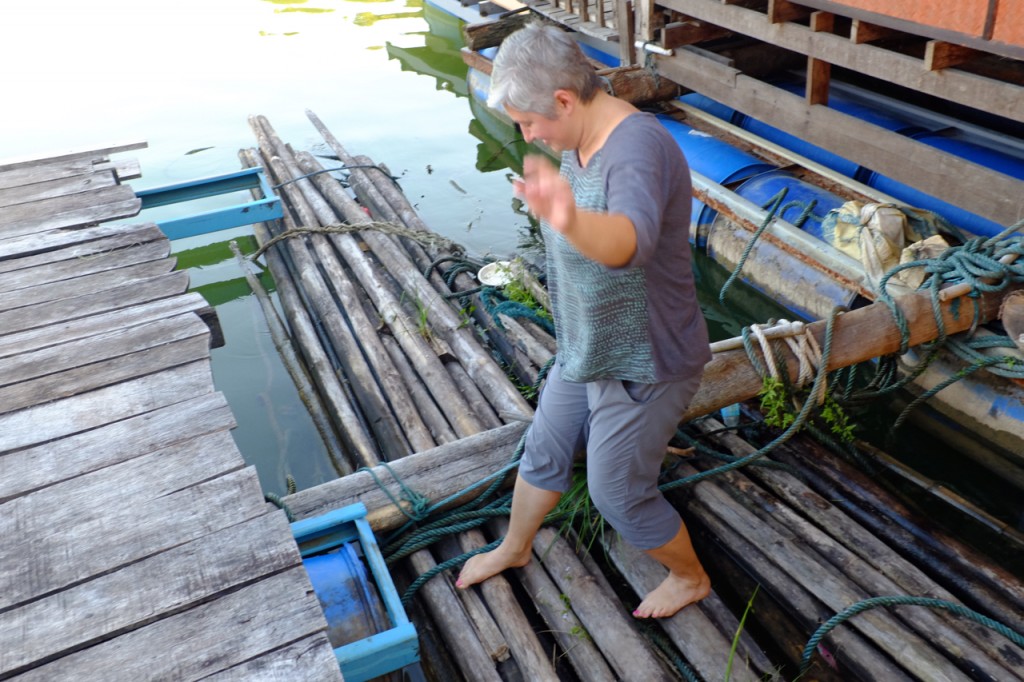 The next day Jette and the Kiwi kids played all morning. What a treat. Just before lunch we jumped back in a longtail boat and headed back towards civilization. 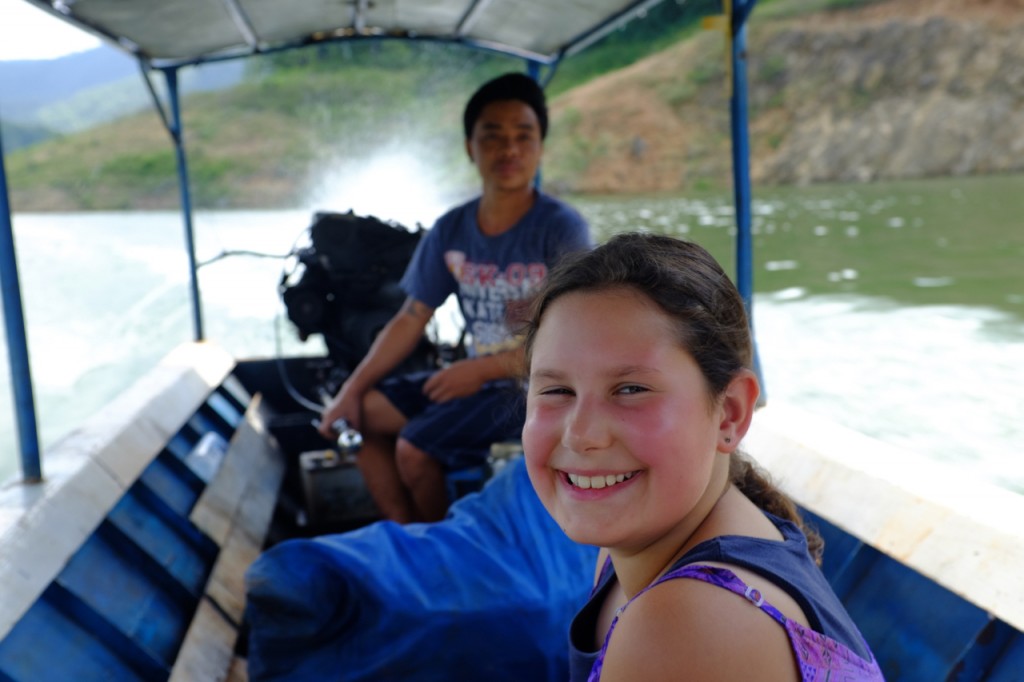 The boat back to civilization 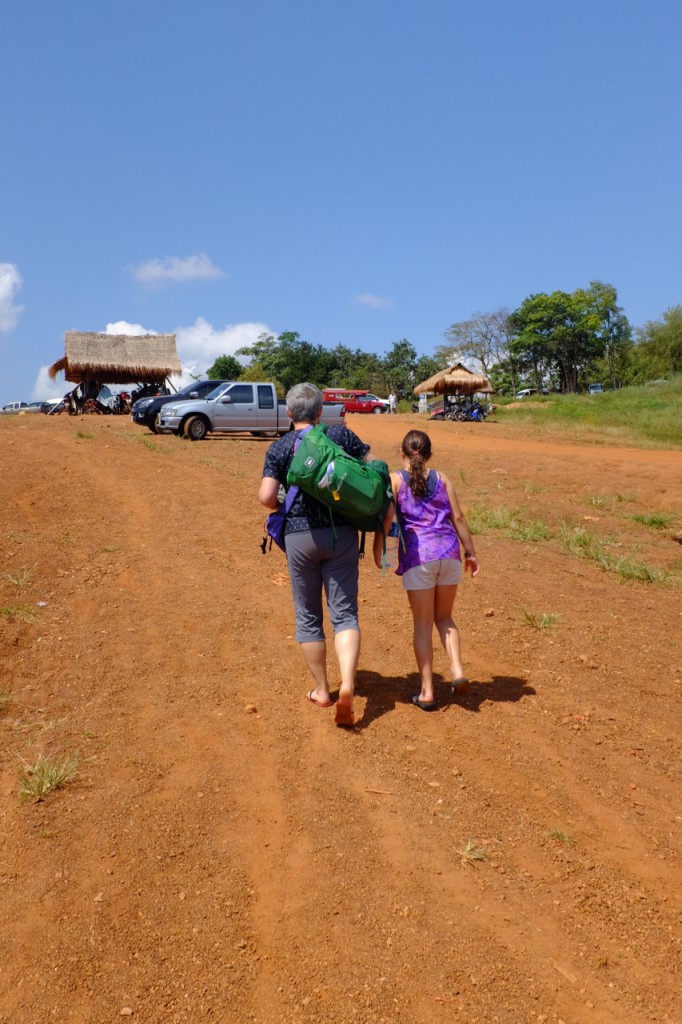 We had a great time at the lake. It was nice to get off the beaten path and just relax for a couple of days. It was especially nice for Jette who got to swim, conquer the high-dive, and make some new friends!