A visit with elephants 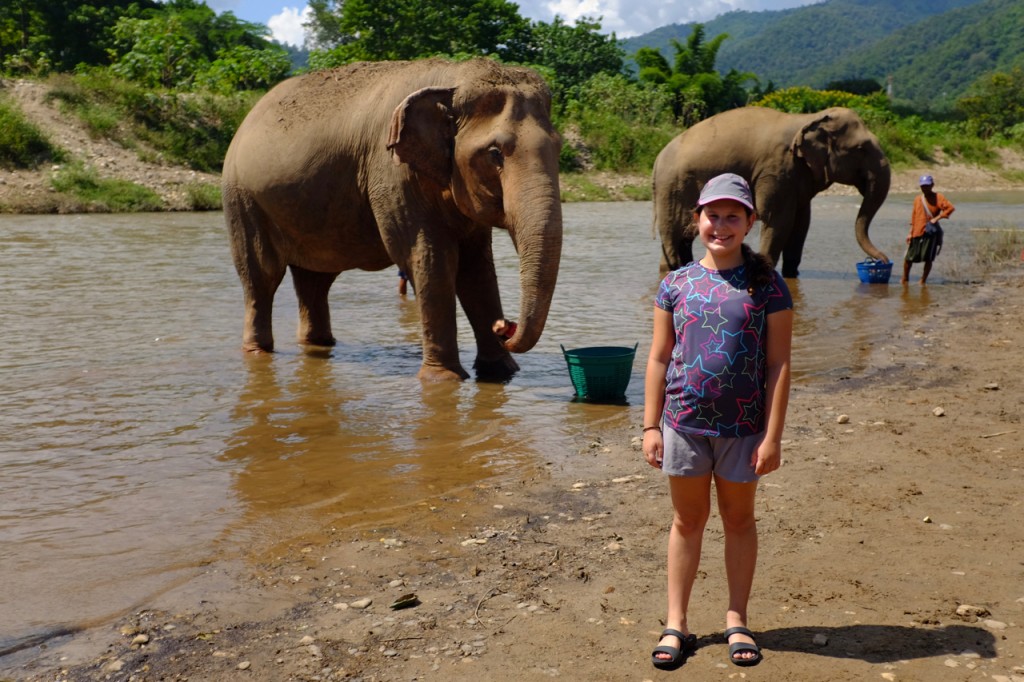 Time for an elephant bath

Any visitor to Chiang Mai will be utterly bombarded with offers for jungle treks, zip line adventures, visits to hill tribe villages, and elephant rides. This place is tourist central and there a dozens if not hundreds of folks offering all of these things and more. We’re not particularly interested in these tourist experiences, but we did want to see some elephants. We took a day trip out to Elephant Nature Park, an elephant (and dog) rescue operation that seemed to be the most ethical way to see and support our big cousins. It is quite a tourist operation, but hopefully our money and time went to a good cause.

As you might expect, the story of the elephant in Northern Thailand, and SE Asia in general, is a sad one. Humans have encroached on their natural habitat and there are very few elephants left in the wild. For many decades elephants have been captured or bred in captivity and used as beasts of burden, especially in the logging industry. In the 1980’s the Thai government cracked down on logging and most of the elephants who were previously used for logging were “out of work.” Wild elephants are now a protected species. But “tame” elephants exist in a sort of legal grey area and are often considered unprotected livestock. Thus many elephants have been put to work carrying tourists around, performing on the street, and generally being used for entertainment. In other parts of SE Asia, they are still used in logging, and in the areas along the Thai-Burmese (Myanmar) border many elephants are still casualties of land mines. Two or three of the elephants we saw at Elephant Nature Park were rescued after stepping on land mines and had feet and legs deformed with injuries from the blasts. 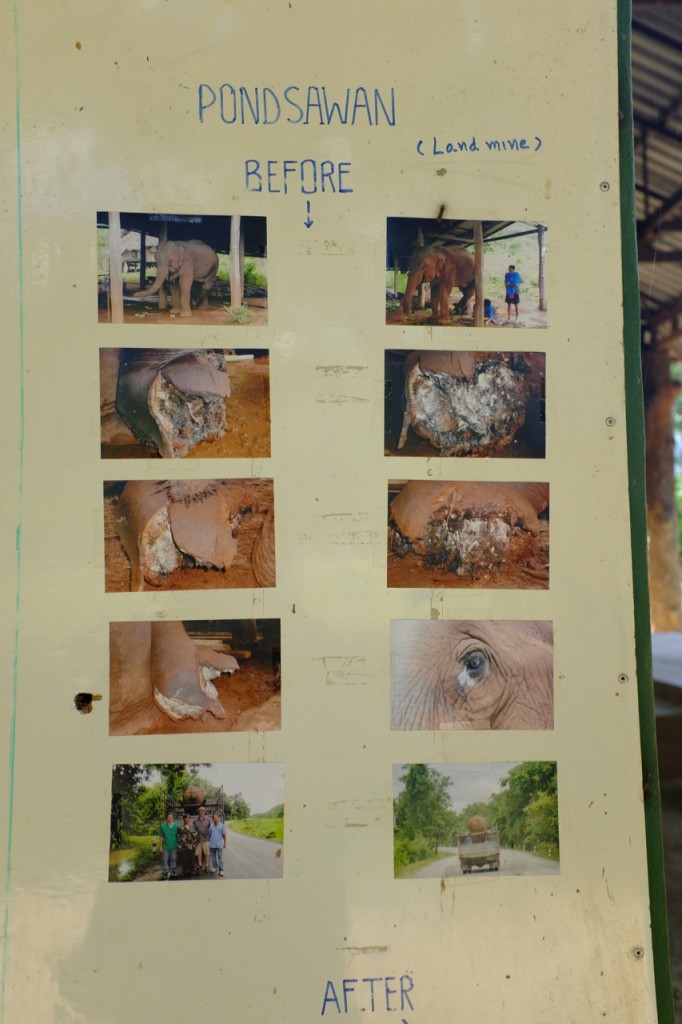 A poster showing photos of one of the elephant’s injuries from a land mine.

You can see more about Elephant Nature Park and it’s rescue mission here on National Geographic.

The Elephant Nature Park facility is tucked into a very pretty valley with a river running through it. The river is essential, as the elephants like to bathe regularly. They wash themselves (or we wash them!) and then cover themselves with dirt. The dirt is a natural sunscreen and also acts as a barrier against insects. In Africa, I’ve seen birds which sit on elephants and groom them, eating insects and enjoying a symbiotic relationship with the big guys. I didn’t see that here and the staff at the sanctuary said that there were no such birds in Thailand. One of our activities as visitors was to walk down to the river and toss buckets of water on the elephants, “helping” them bathe. I don’t think they needed the help, but it was lots of fun for us! 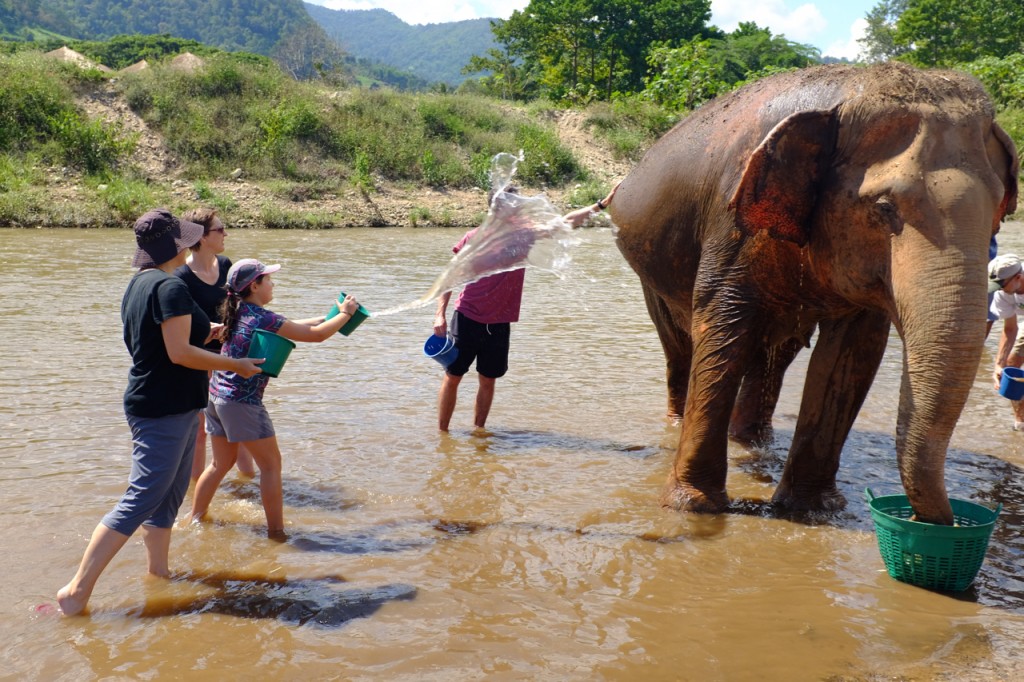 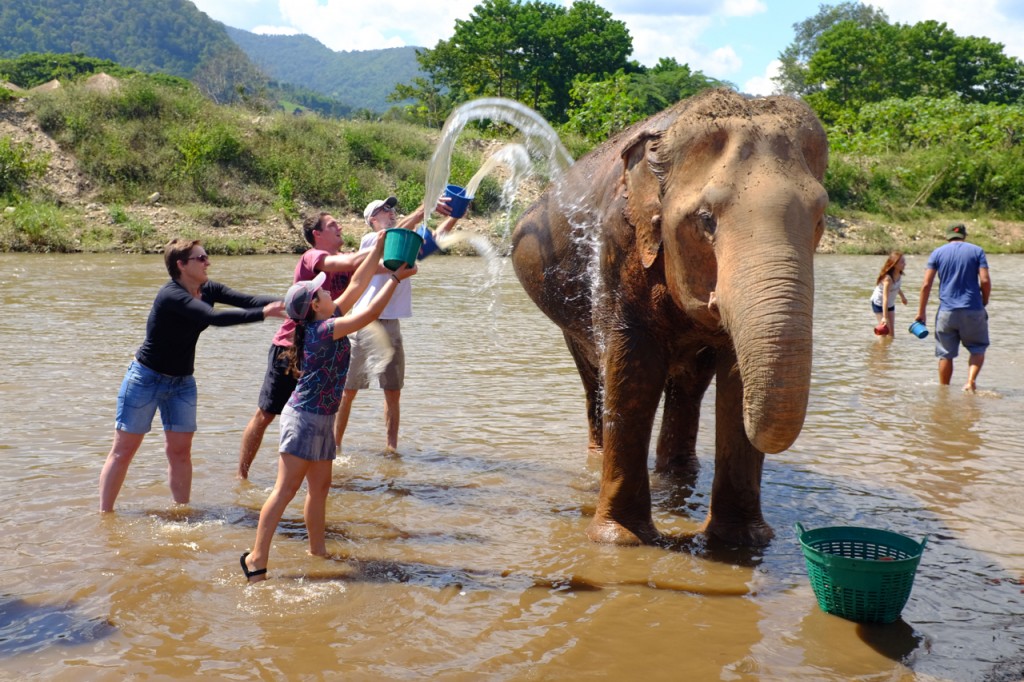 I don’t remember her name, but this elephant was one of the older ones. If I recall correctly, she was in her 70’s. See the big tummy? She’s not pregnant, just fat! 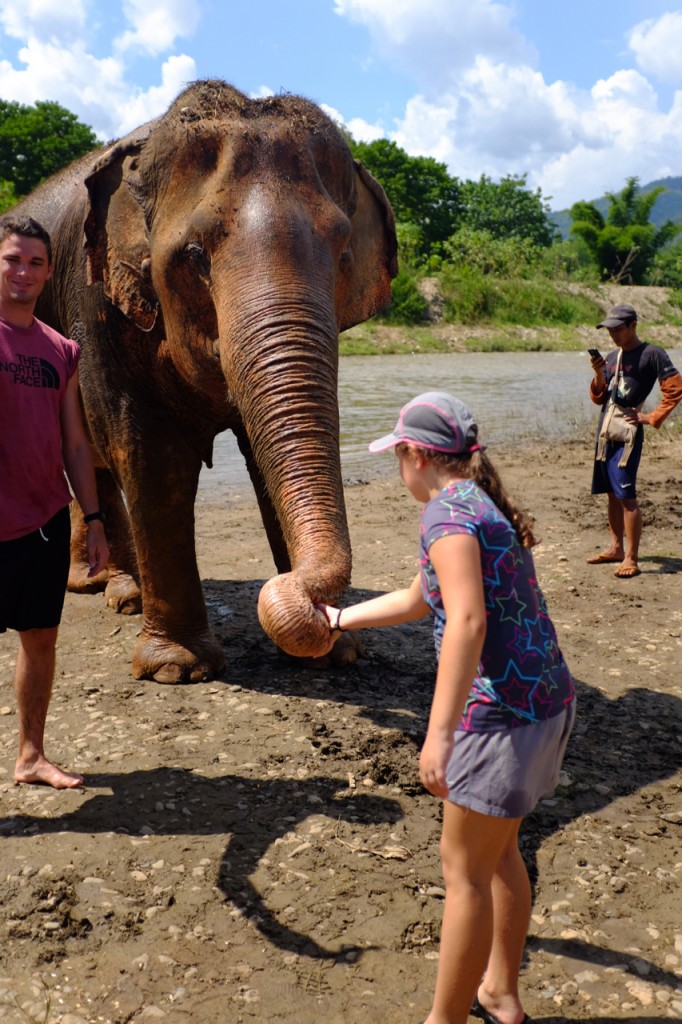 Let’s shake on it. 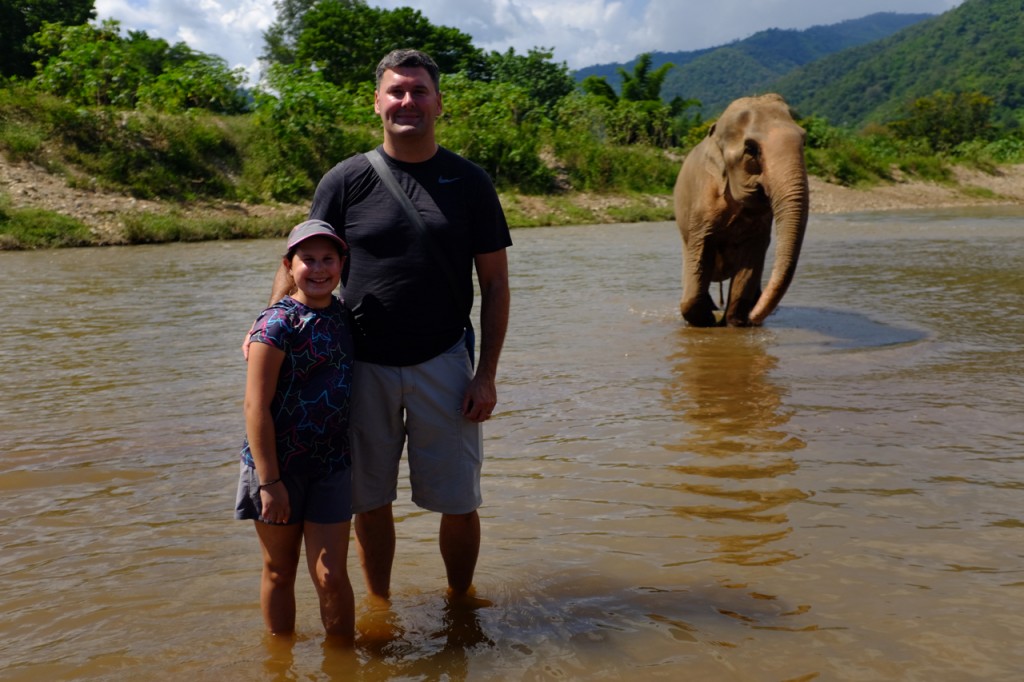 We’re all enjoying the cool water.

I’m getting ahead of myself. When we first arrived, we had a bit of an ice-breaker feeding the elephants: 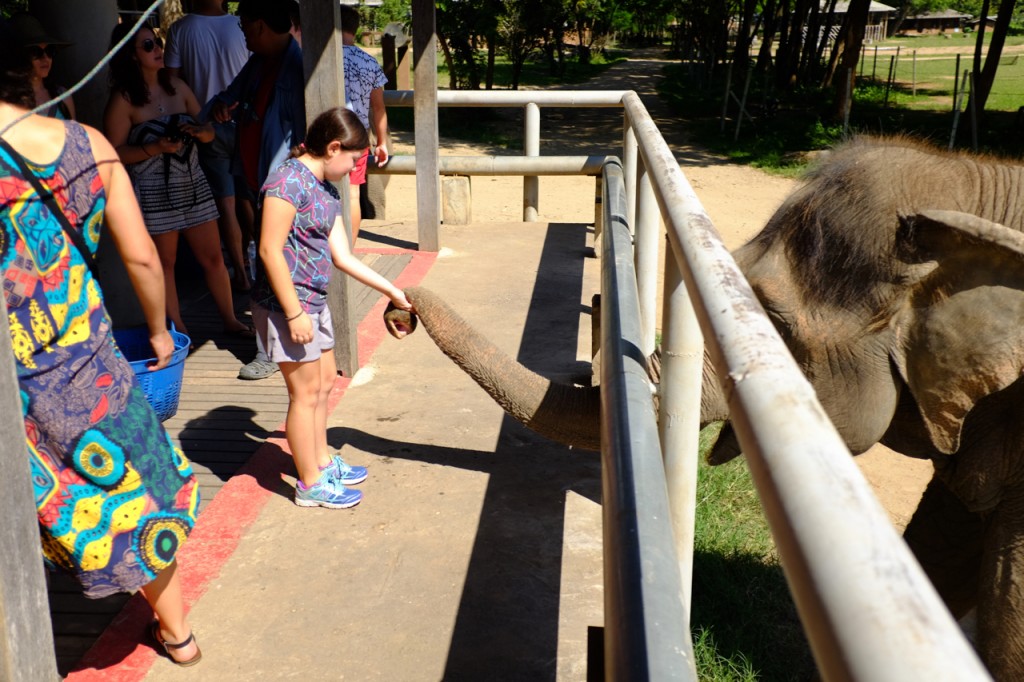 POP QUIZ: How much do Asian elephants eat in a day?

Most of the day is spent eating and they consume an astonishing 150-300 kg of jungle fodder per day. They enjoy bamboo shoots, grass and all sorts of greens. They sometimes become intoxicated after eating over-ripe fruit. In addition to this massive diet, which only about 50% of which is digested they drink about 150 litres of water daily.  Learn more: http://www.elephantnaturepark.org/about/about-elephants/

After the meet-and-greet, we walked around the property and met the elephants. All of the elephants we interacted with are female. The males are more aggressive and are kept in another area. 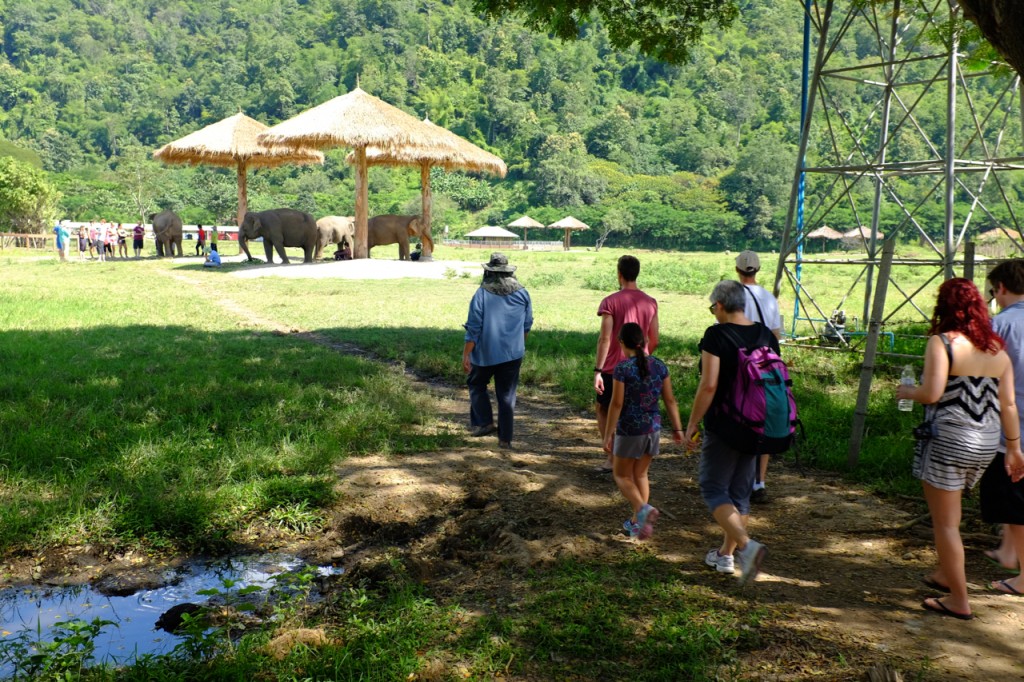 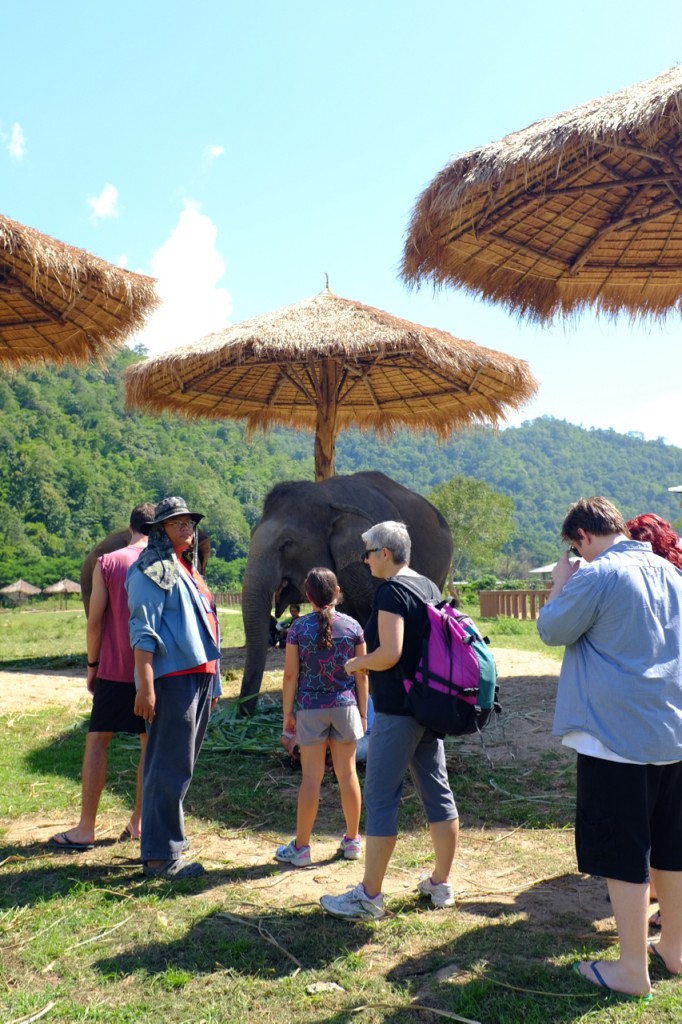 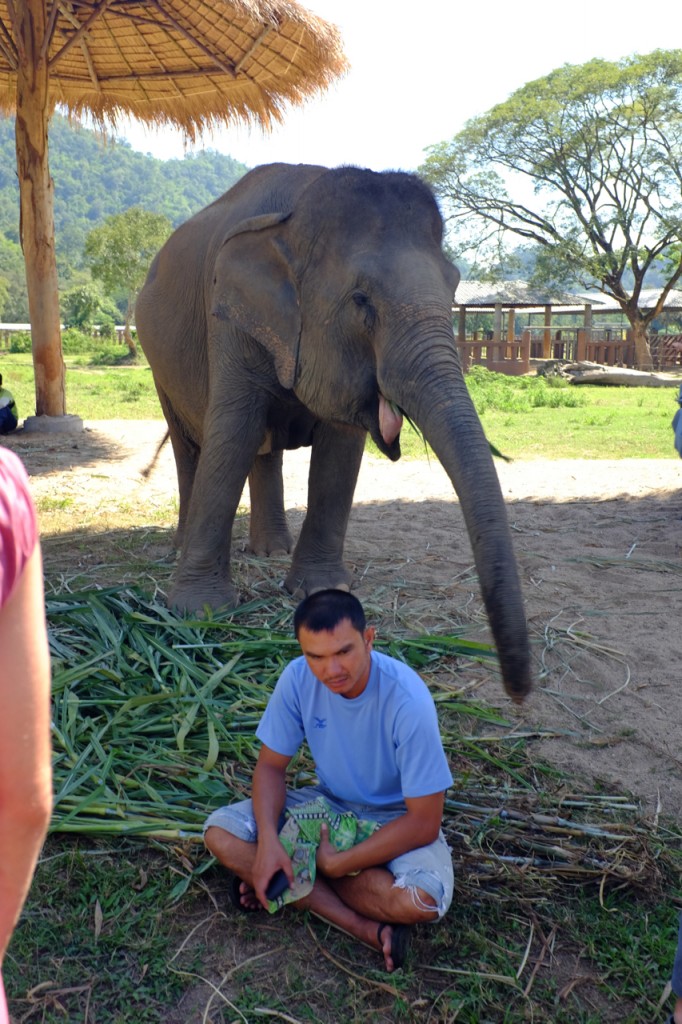 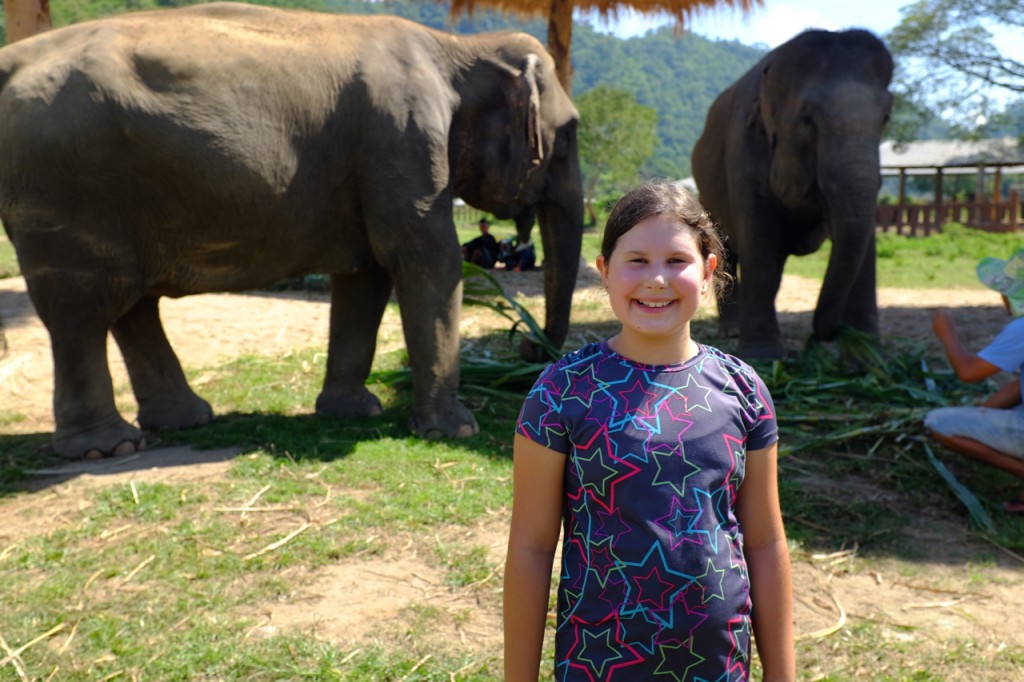 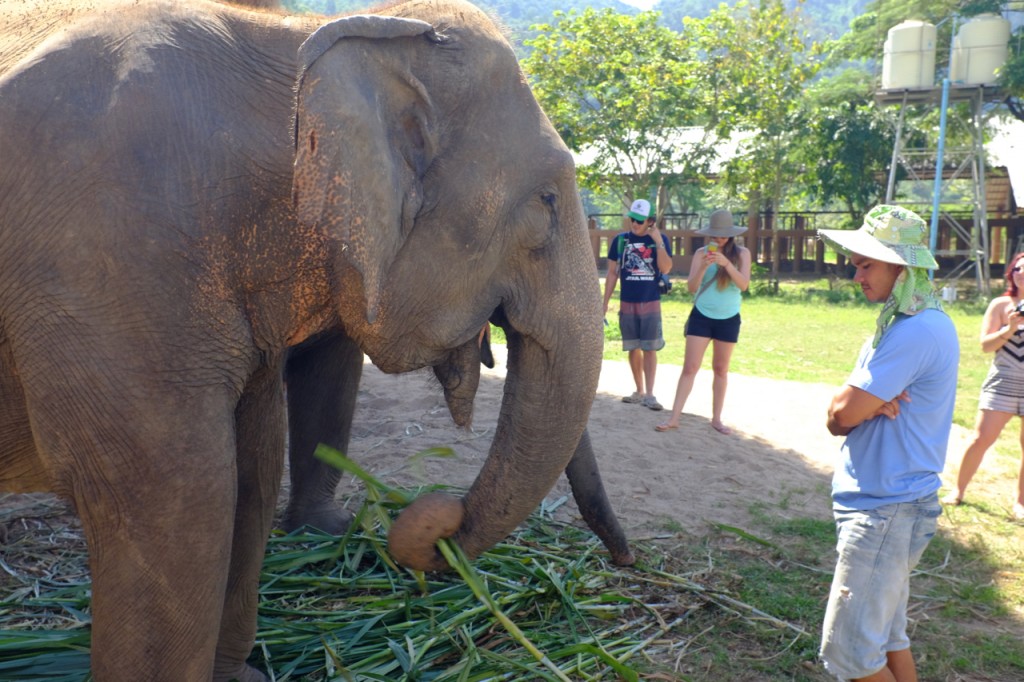 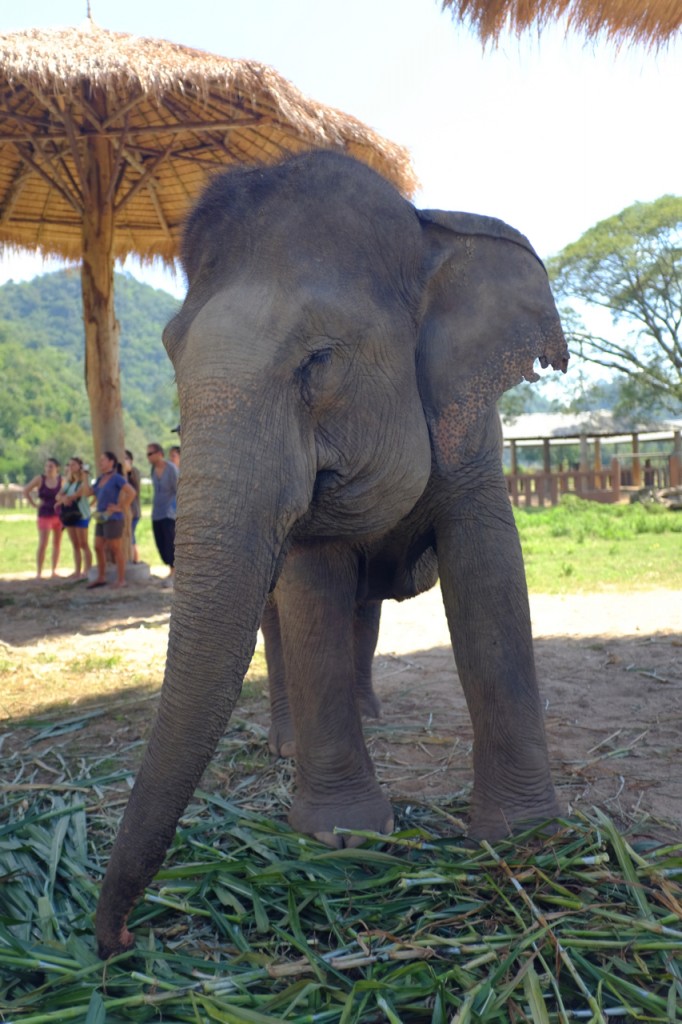 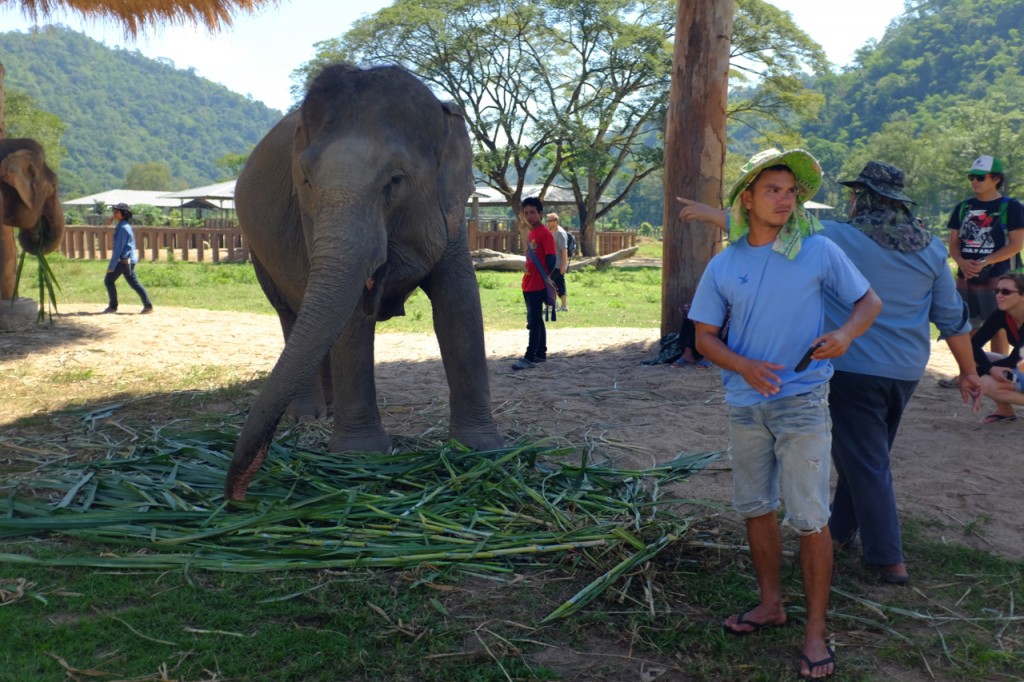 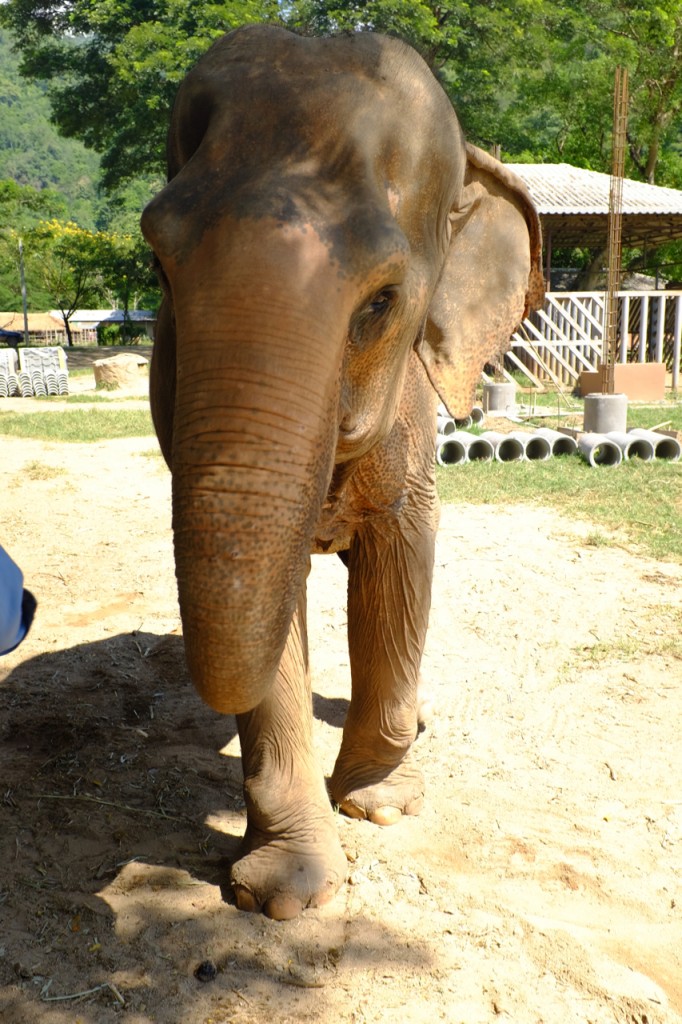 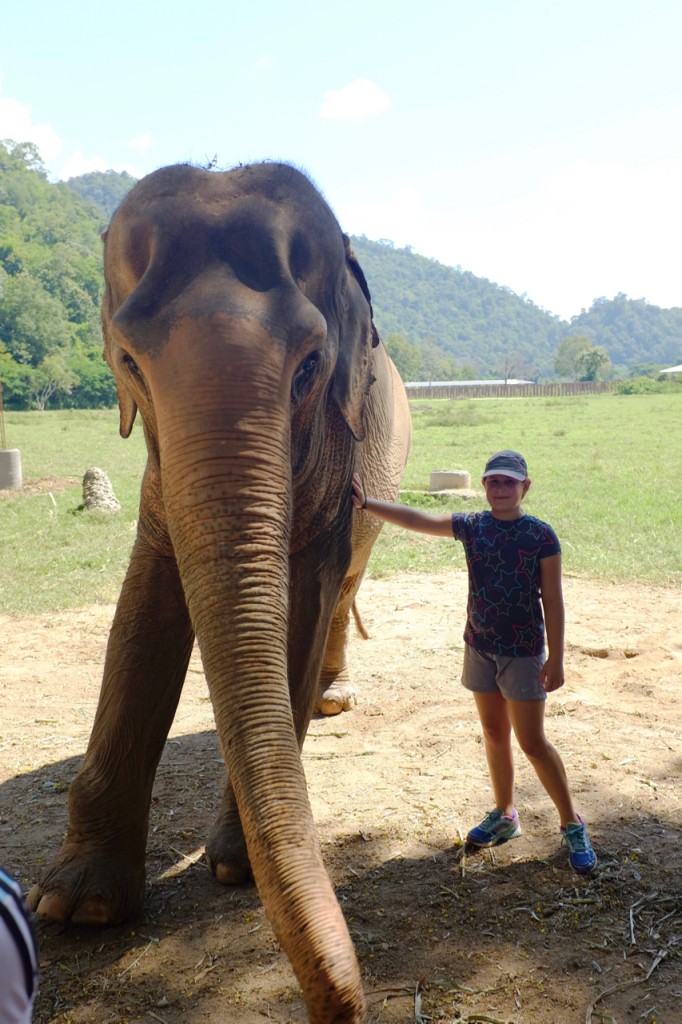 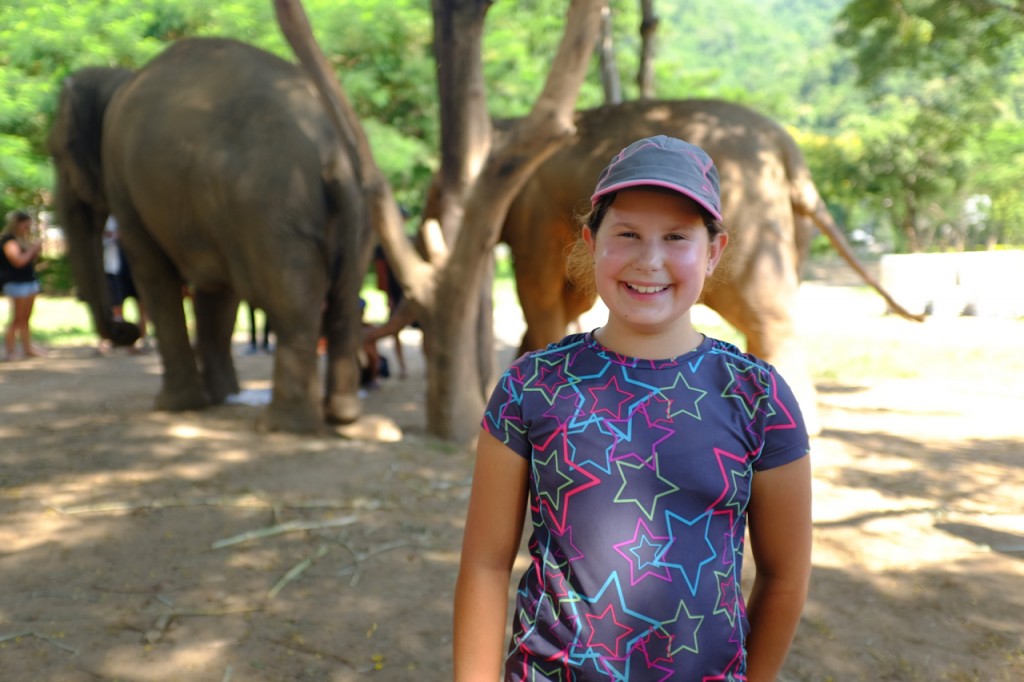 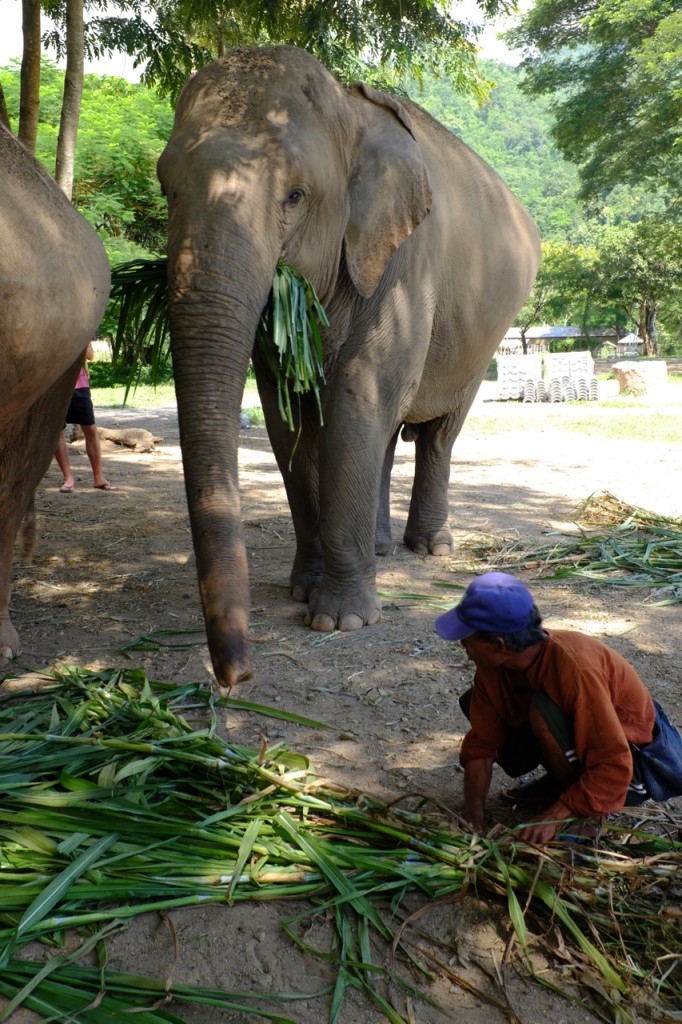 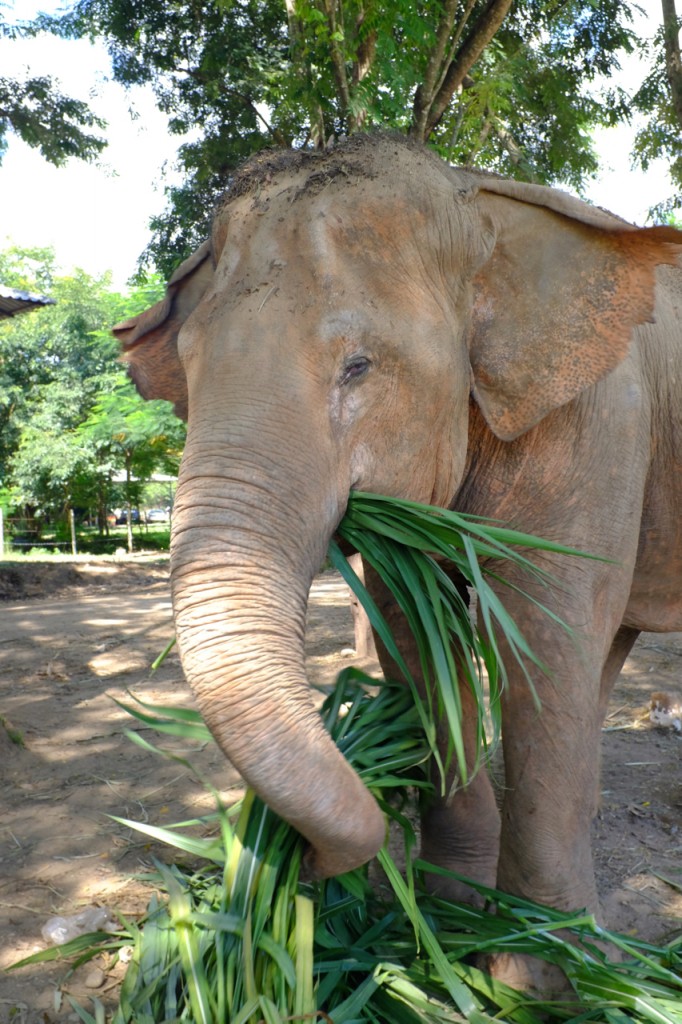 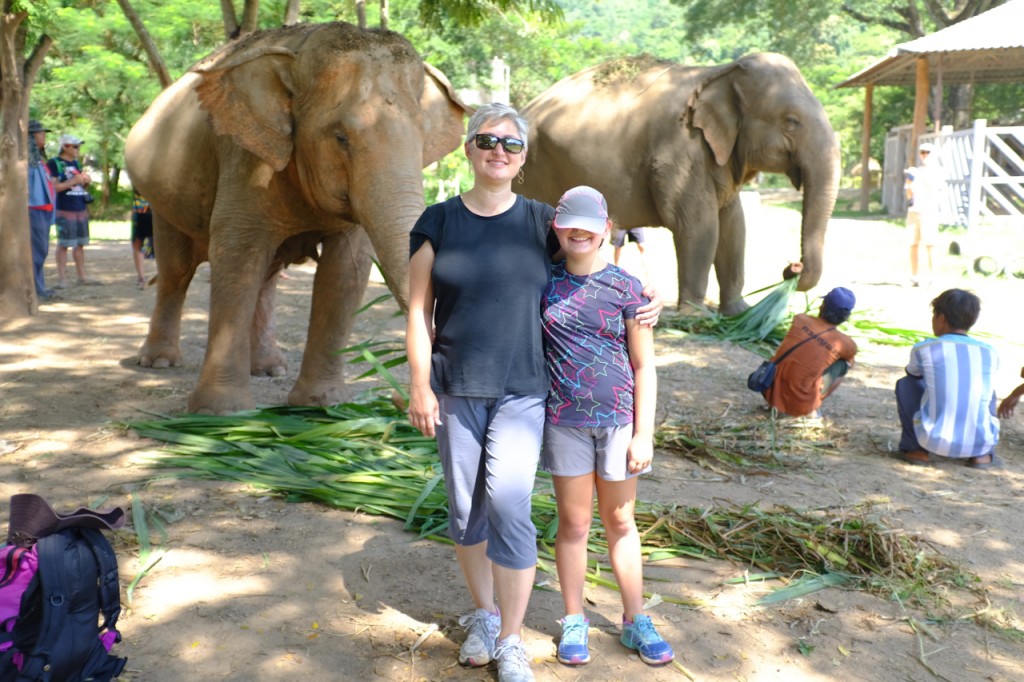 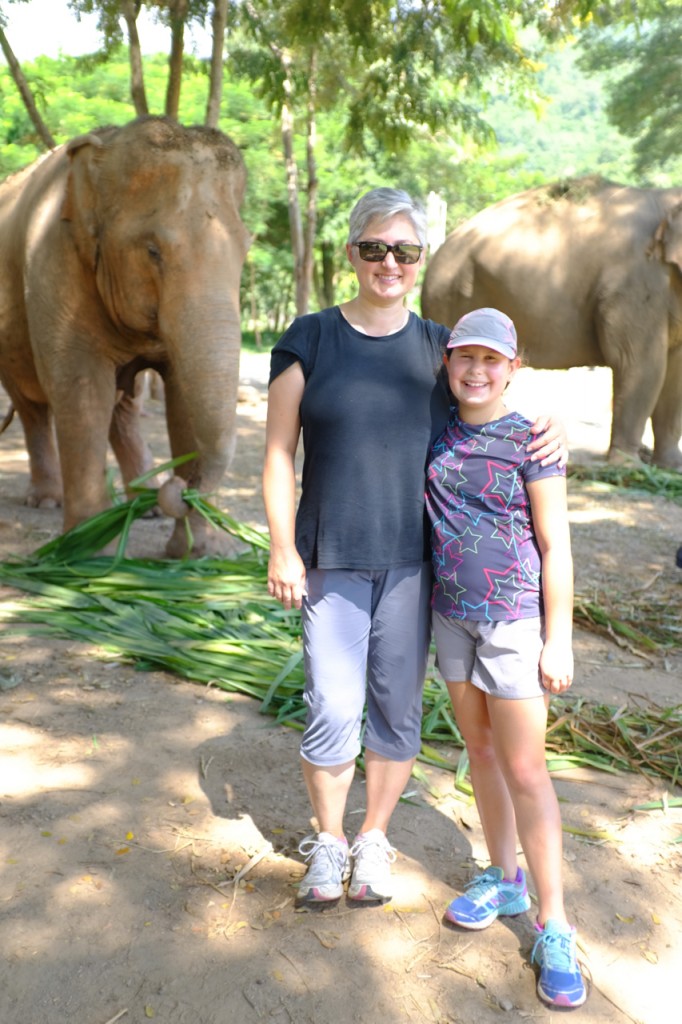 We met a pig along the way. 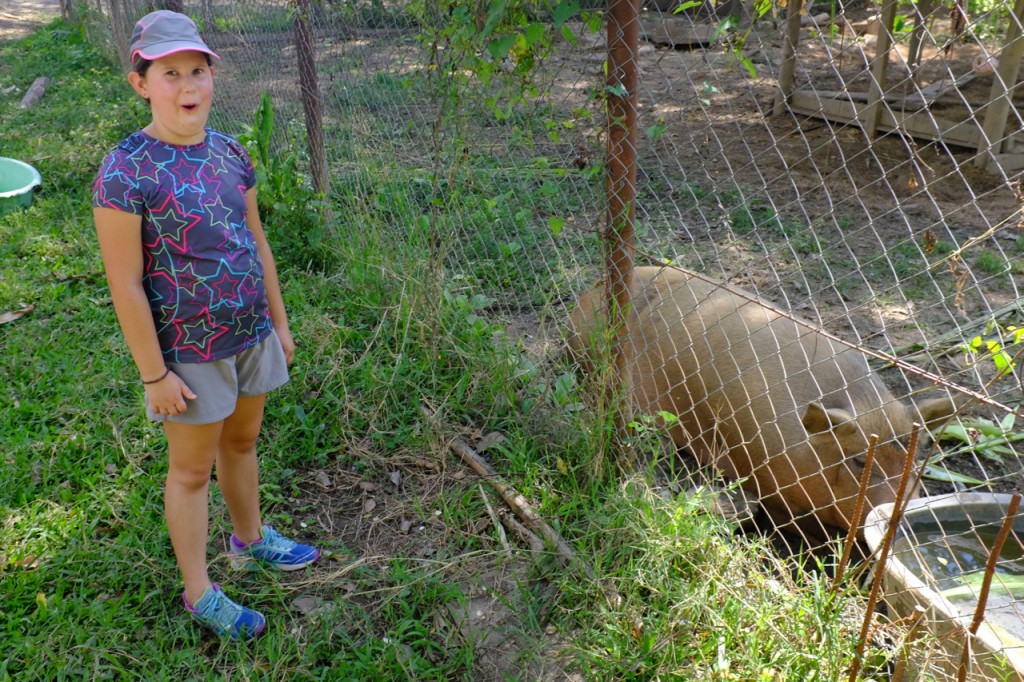 Oh, look at the piggy!

She(?) was actually quite aggressive. I poked a piece of green grass through the fence and she nearly got my finger in a surprise attack!

There were also hundreds of rescued dogs. Though we didn’t get to see many of them, some of the less aggressive ones were lounging about, and even “working” with the elephants handlers. As you may know, Jette loves dogs. 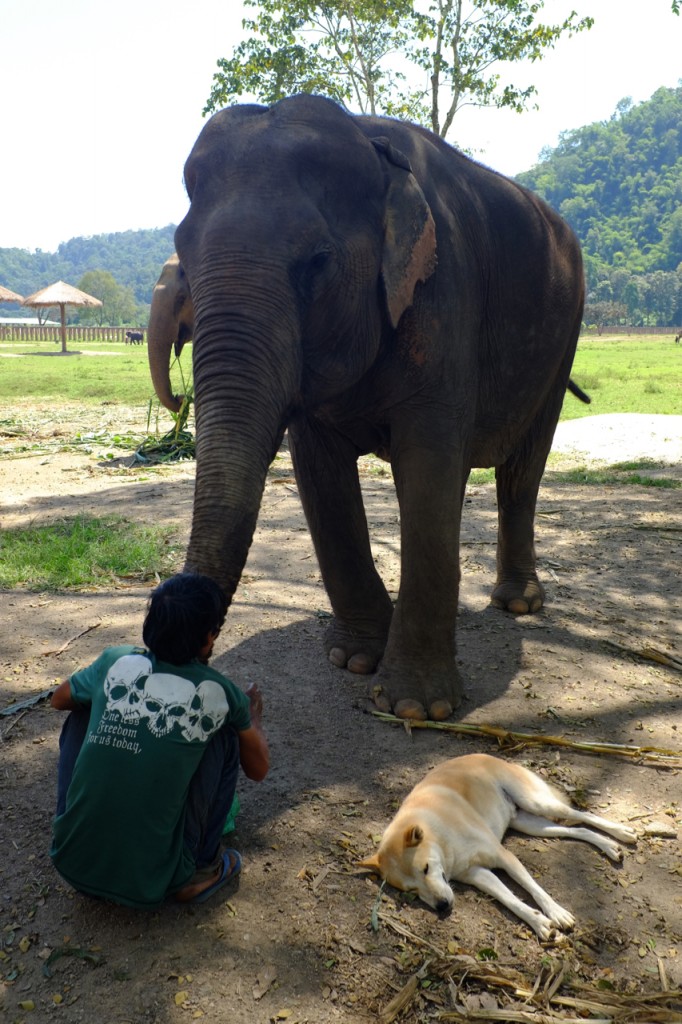 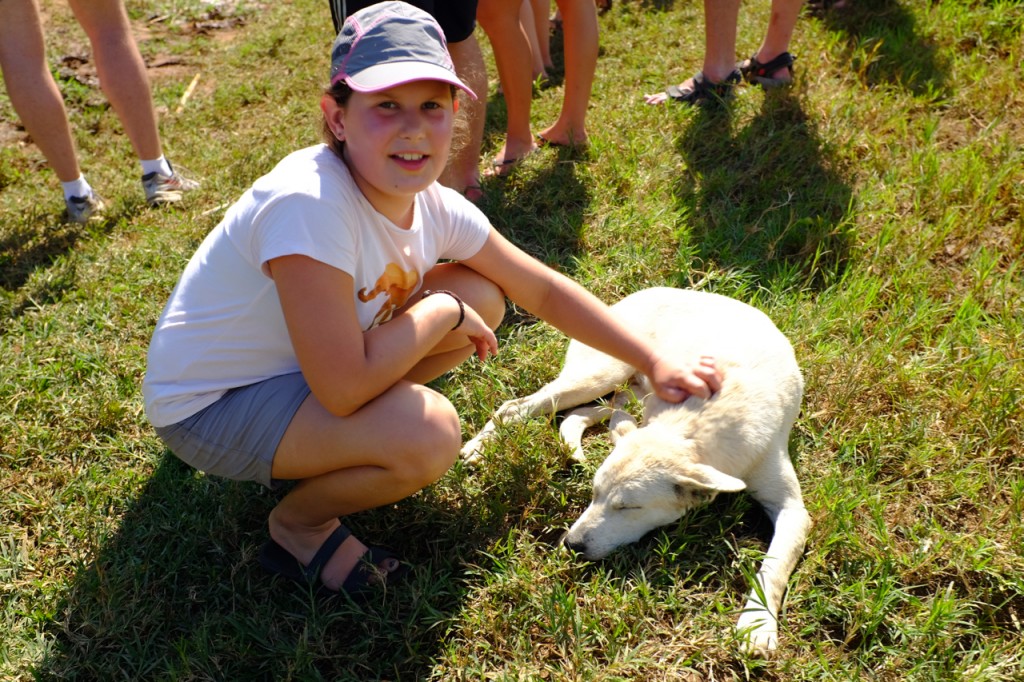 It was a great day. We learned a lot about Asian elephants, the plight of elephants in Thailand, and got to see what one rescue operation is doing to try to make a difference. 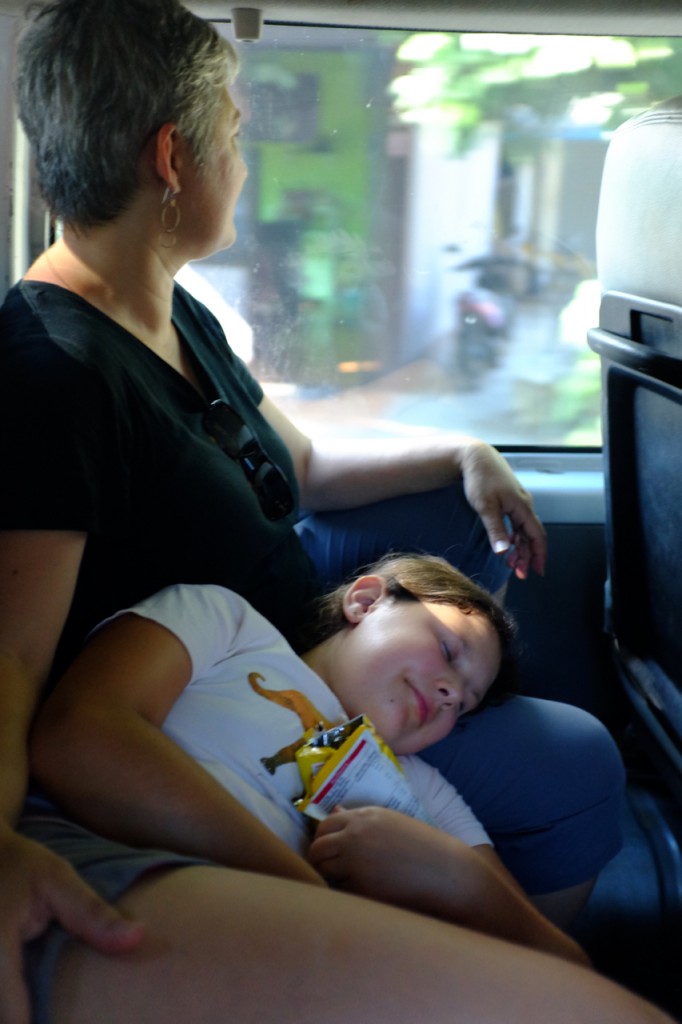 Resting on the ride back to our hotel