We awoke to rain and wind. We enjoyed a nice buffet breakfast at our over-priced hotel, packed our bags, left them with the front desk, and headed to the Cologne Cathedral for some sightseeing. 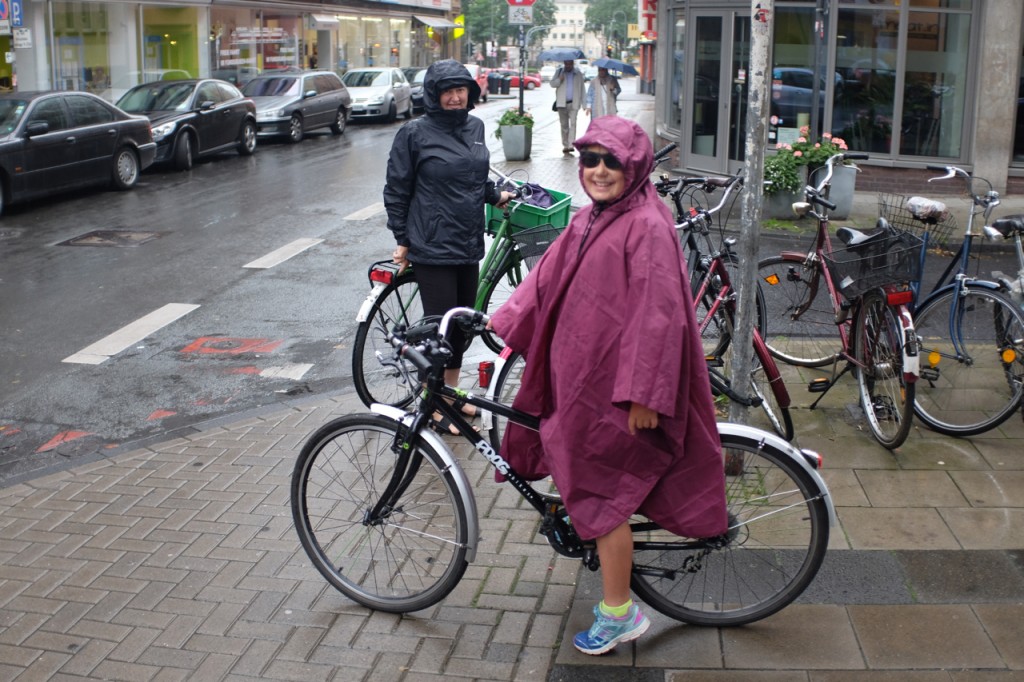 Ready to see some sights

At the cathedral there was a service in progress and Mila and I didn’t take many pictures. It is an amazing work of architecture, but some of its impact was dampened by the fact that our experience at the Strasbourg Cathedral was still so fresh in our minds. Also, because there was a service taking place, we could really only “peek” into the interior. 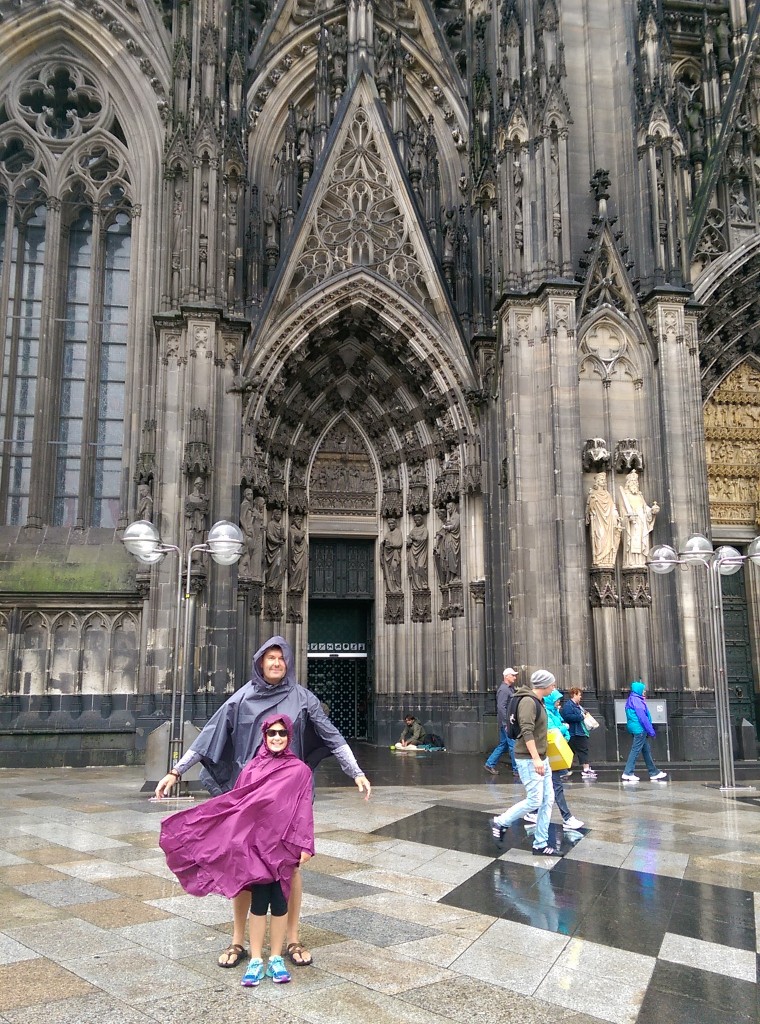 In getting to the cathedral, Jette’s purple poncho was almost instantly soaked through. The cool temperature, wind, and rain made it very clear that long days in the saddle were not feasible for us when it was rainy. So, we stood in a sheltered doorway of the cathedral and discussed our next steps. Last night we talked about taking the train to Dusseldorf or Duisburg, but it was quickly dawning on us that we were really running out of time. We decided to skip the industrial part of Germany and take the train to Arnhem, which was about 150 km from our final destination, the North Sea.  With the daily distances we were averaging, this would give us a good chance of finishing the route by bike. Anything short of that and we risked not being able to finish by bike in the time we had left. Also, since the weather forecast for the next couple days was rain, we figured it was better to make a “rain day” a “train day” and jump on a train now rather than later. 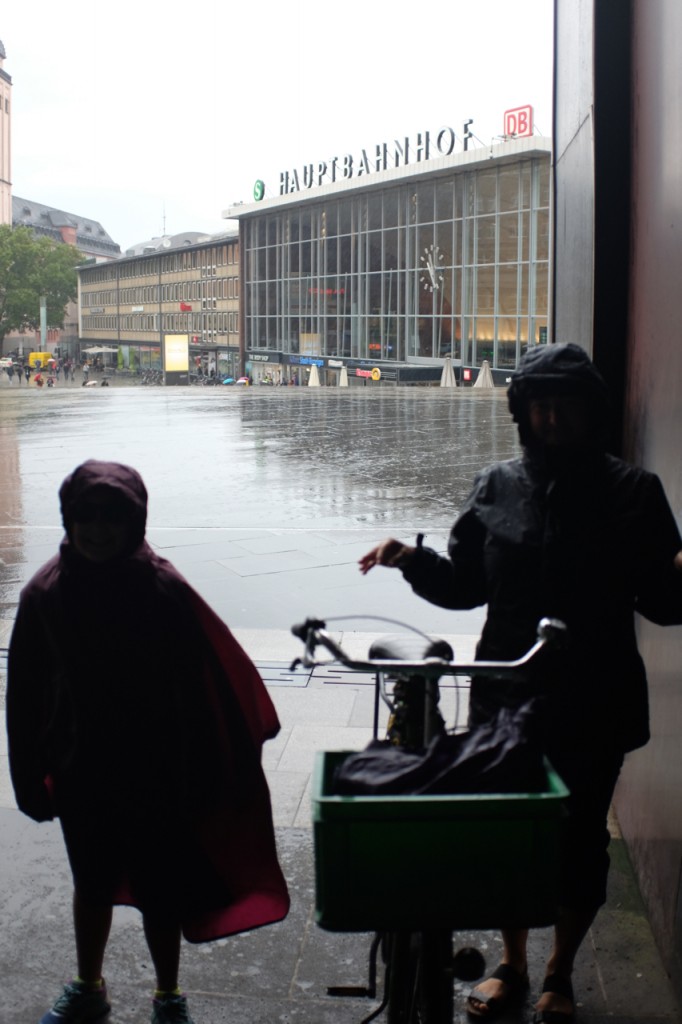 Looking at the train station from the cathedral

So, Jette and I ran through the rain to the train station and bought tickets to Arnhem. 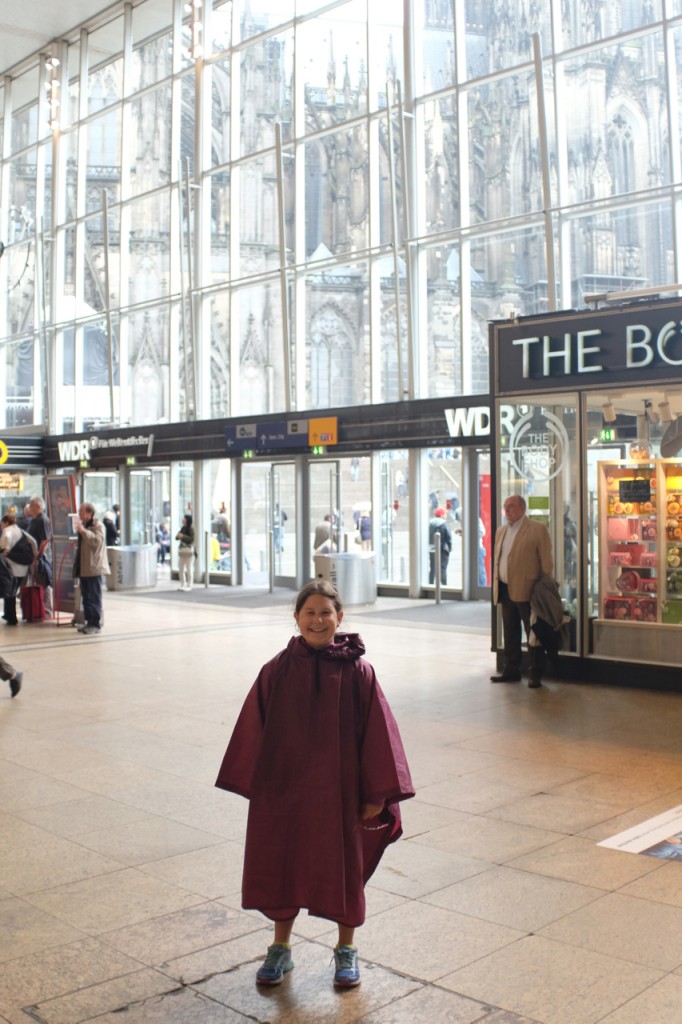 In the train station with the cathedral in the backbround 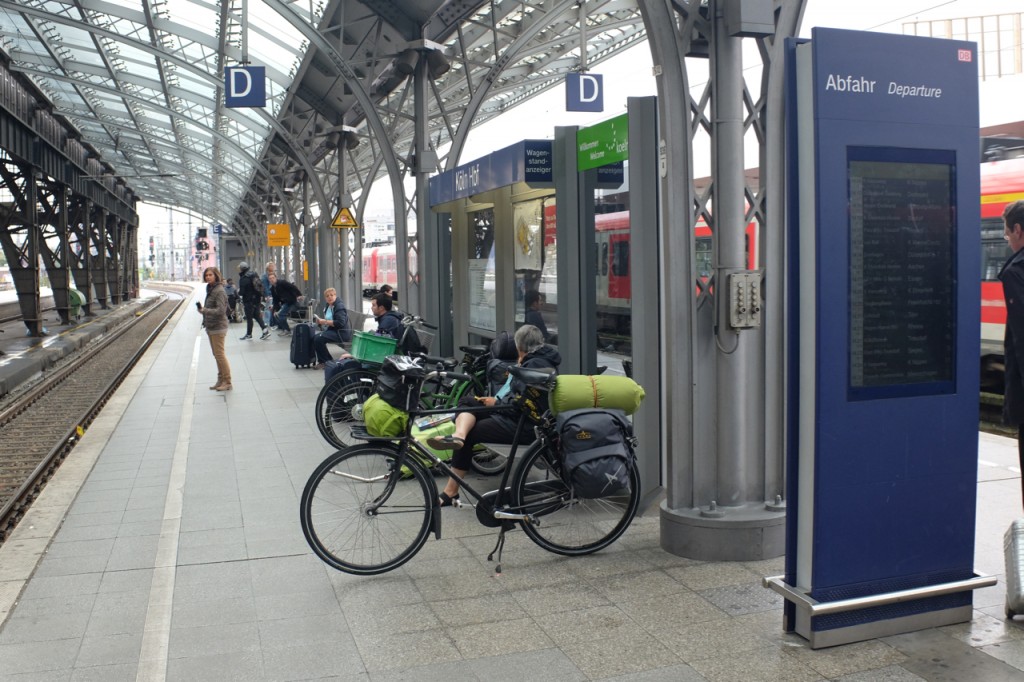 At the Koln Station 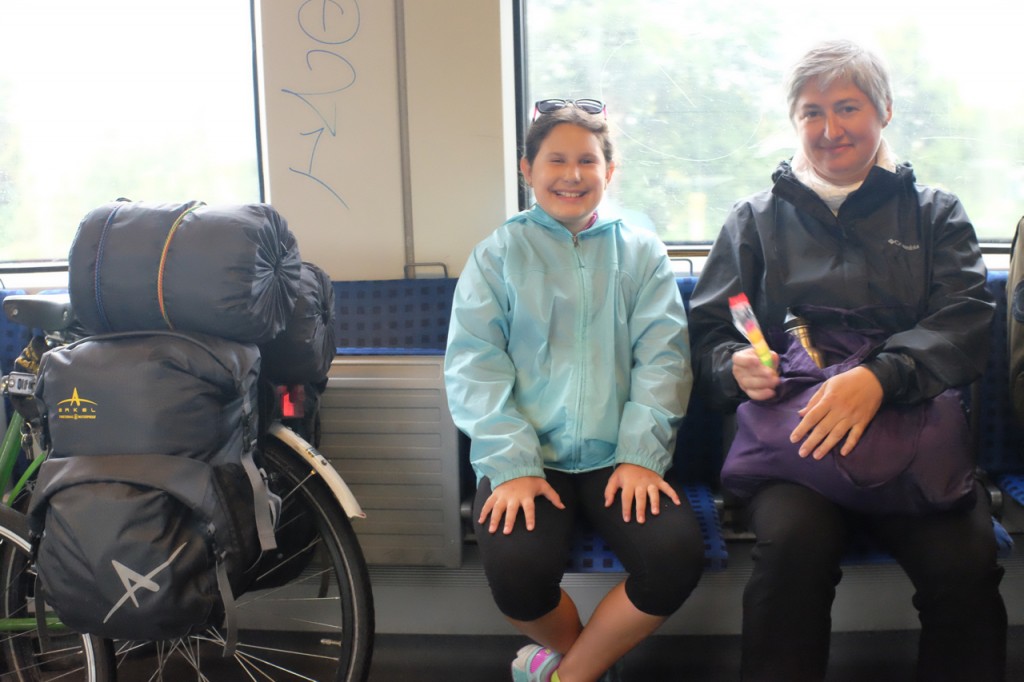 On the first train of the day 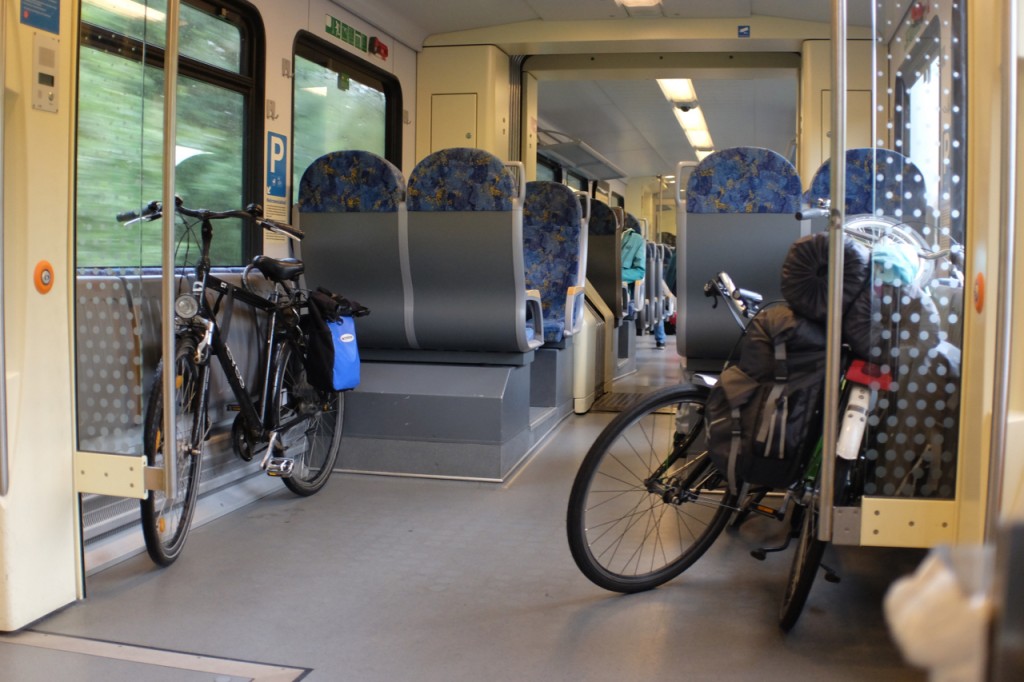 Our bikes and another on the train 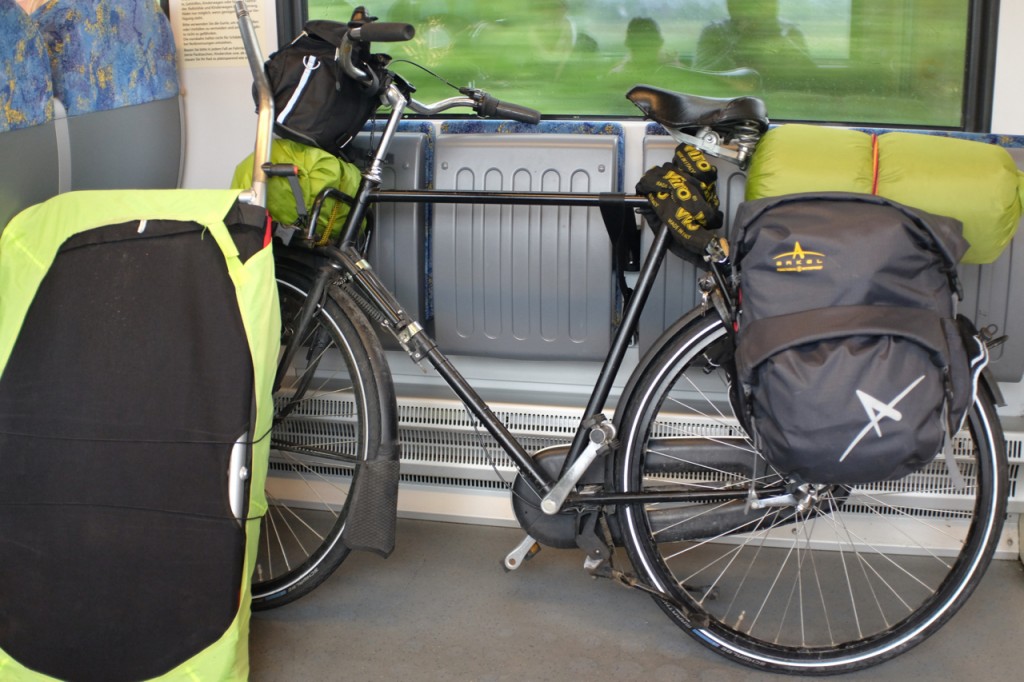 My bike and trailer with wheels removed

There were multiple trains and transfers and thankfully in each case we were able to roll the loaded bikes onto the trains instead of having to unload the bike and shuttle bags and bikes separately.

We were on local commuter trains, not regional express trains and we seemed to have hit one of them at the same time that the local high school kids were going home. They pushed onto the train before we could get the bikes on and took up all the space in the designated “bicycle car.” We had to cram ourselves and the bikes into the entry vestibule of the train car, which made it virtually impossible for other people to get in an out. We spent a couple of hours standing crammed in, holding our bikes up in the entry way. Each time the train stopped and the people in the bike area exited the “bike area” of the train others filled in before we could move our bikes. Countless people cursed us for blocking the entry/exit, but ironically, they were the same people who sat in the designated bike area! Culturally, this situation stumped us. Everyone’s lives would have been easier if those knuckleheads would have just let us “park” our bikes properly on the train! We just couldn’t understand it!!!

We made it to Arnhem and with more rain forecast, checked into a hotel near the train station. As it turned out, just like “The Expo” in Cologne there was a big event in town and many of the hotels were booked. Who knew?! Luckily the Best Western adjacent to the train station had one room available… 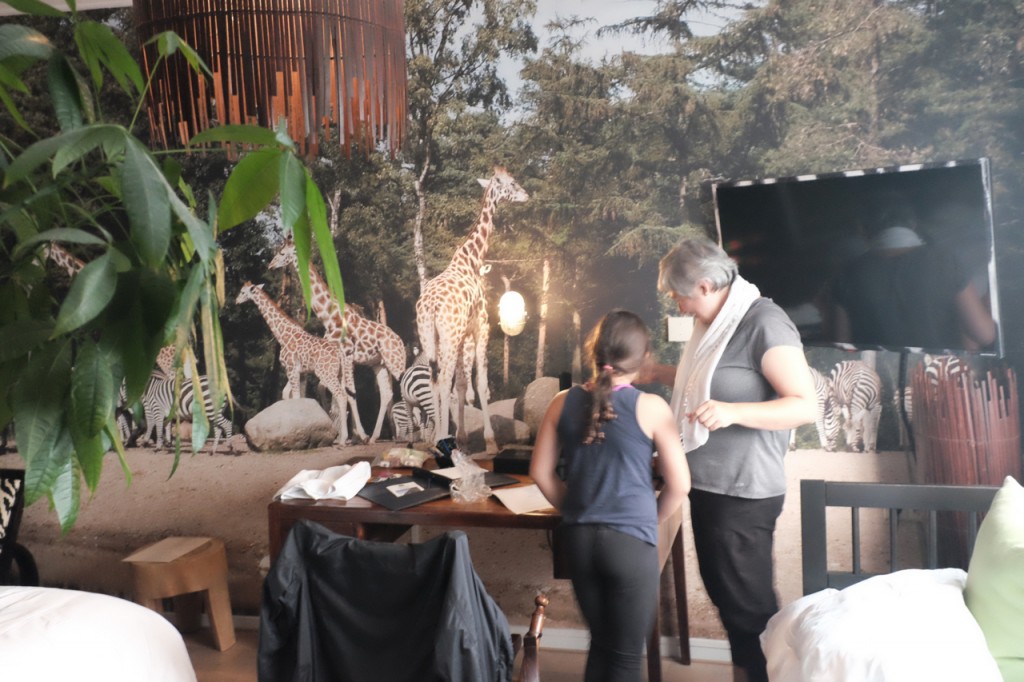 Hilarious, I know. We seem to be a magnet for “themed” hotel rooms. We are animal lovers. Go figure.

The event in town was the 71st Anniversary of the Battle of Arnhem.  The town was full of soldiers – young, active duty ones, and old originals.

The hotel let us park our bikes in the basement with the employee bikes. Parked, unpacked and cleaned-up we found a nearby cafe for a nice dinner and called it a day. 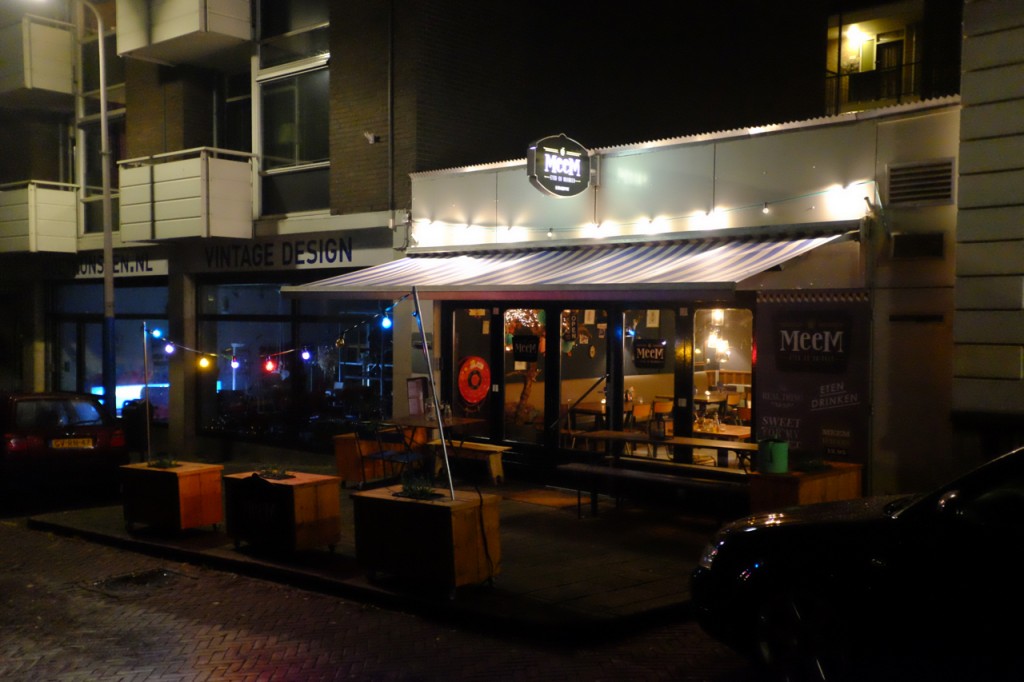